Beechwood is a young, super-stylish rock ‘n ‘roll band that has dominated the downtown New York City scene as of late. Pretty boys, they are far from all show. This trio of musicians have both the talent and balls to kick you in the gut with their sound and musical abilities. Raw. Gritty. Rock ‘n’ Roll Glamour. Who are they, you may ask?

Gordon Lawrence is the statuesque lead singer with his intimidating “I don’t give a fuck” glare. And blond bass player Sid Simons is a male beauty who looks like he just walked off a Saint Laurent campaign in his ruffled shirts. But it’s drummer Isa Tineo who really demands attention with his brooding good looks and tattoos, topped off with a very insane and demanding style of drumming; he can barely sit on the stool when playing. Add Cynthia ‘B-Girls’ Ross as the band’s manager to the equation and you just really can’t go wrong.

Check them out in the East Village “Berlin” scene; and see them off to Europe to take over the world! Photography Alexander Thompson. Menswear stylist Amber Doyle.

PONYBOY:  Before seeing Beechwood perform live, we were intrigued by the band’s visuals, with that NYC downtown retro rock ‘n’ roll look. Seeing the band live was a mind-blowing experience and we just didn’t want it to stop. It really wasn’t what we expected, it was so much more. Do you get that reaction from people who come to see you play?

GORDON LAWRENCE:  Well, I can’t speak for our audiences because they are all different. I never know what someone’s expectations are based on, how we look or whatever; and frankly I don’t really care. We are what we are, and if people like us – great. If not, that’s okay too. Nothing we do is contrived. And we would never consider catering to anyone’s expectations other than our own.

ISA TINEO:  People’s reactions to seeing us live are always intriguing to me. We put our hearts into it, every show, every time. It’s honest and it’s raw. I think anything worth watching, you’re gonna get an honest reaction. The people are all a part of the show. At the end of the day, it’s all energy and it’s positive. I don’t look much more into it than that.

PONYBOY:   The band gets so many comparisons, anything from The Stooges to Suicide, in other words, references to underground bands that are raw and gritty. Not too bad! Tell us your thoughts on this.

GORDON LAWRENCE:   It’s true that people do compare us with bands like The Stooges and Suicide, but that’s true for every band out there. We don’t want to be put into a box, or category, because we are constantly changing as people and as a band. But people who compare us to those kinds of bands are just trying to put us into context. Everything has a history, including our music. Rock & roll didn’t just burst into being from nowhere, and so for us, the comparisons are just a product of putting our music into context.

PONYBOY:   We read that the band formed out of a childhood friendship between Gordon and Isa. Growing up together, both in and out of the band, we assume that there’s a feeling of safety, of reading each other’s minds when rehearsing or writing songs, and more importantly when playing a live set. Would this be correct?

ISA TINEO:   That’s correct. Gordon and I have had the pleasure of being two people at the right and wrong time of our lives that connected with each other in a personal and creative way. We play music together because it’s truly the cores of our souls. It’s what keeps us alive and it connected us then, and continues to connect us now and forever. With time comes the gift of unspoken communication, which we both have.

GORDON LAWRENCE:   Our minds are very much in tune with each other while we play, and that includes Sid, which just goes to show how much he belongs in the band.

PONYBOY:  Sid, you joined the band more recently. Was it somewhat difficult fitting into the dynamic, with Gordon and Isa’s band history and friendship?

SID SIMONS: No, not at all. It felt right as soon as we started playing together.

PONYBOY:  Your debut album was released in January of this year. Have you started working on a follow-up record? And if so, how would this project differ from your first record? Or would you say it’s an extension of the first?

GORDON LAWRENCE:   We have a new album entitled Inside The Flesh Hotel coming out on June 8th with Alive Naturalsound Records. This album was much more of a collaborative process between the three of us. We even wrote some of the songs in the studio. The album is much more representative of our live sound in that it is more stripped down, than Songs From the Land of Nod, and less psychedelic sounding. It’s got some real dark sounding rock & roll freakout songs, some two-minute pop songs, and even a country song. It’s definitely a step up from the last record.

PONYBOY:   You’re all in your early to mid 20s. Young, stylish and good looking. Do people look at the band as the next big thing to come out of the New York music scene? Is that added pressure?

GORDON LAWRENCE:   A lot of people who write about us believe that we’ll get big, as do our friends and our fans. We definitely believe in ourselves and our ability to take this as far as it can go – but right now we’re just focused on getting through the day!

PONYBOY:    How do you feel that the band would change if you had enormous commercial success?

GORDON LAWRENCE:  I don’t think we would change as people or a band – it would just make our lives a hell of a lot easier to not have to struggle constantly for money for things such as food, rent, guitar strings, drumsticks, etc. All of that energy we spend on just barely surviving on a day-to-day basis is energy that we would have to spend on our music – writing, recording, rehearsing, etc.

ISA TINEO:   I know we’re all doing this for the right reasons – there’s no doubt about that for me. We’ll always be who we are now, though we’re constantly progressing.

PONYBOY:   You have a European tour coming up, which will add great exposure for the band. What expectations, if any, do you have for this tour?

ISA TINEO:   It’s exciting, and it’s going to be quite the adventure. What could be more fun than traveling the world with the people you love, doing what you love? That being said, the reality of the situation is well understood. Money is extremely tight, but nevertheless we’re coming harder and tighter than ever!

PONYBOY:   Cynthia ‘B-Girls’ Ross is currently your manager. Does her expertise and wisdom from playing in a band/s for so many years come in handy?

GORDON LAWRENCE:  Yes, definitely. Having Cynthia as our manager has made all the difference. She helps us set clear goals for our future, and above all, just makes shit happen. She went through the whole rock & roll thing when she was our age, so having her combined experience and wisdom on our side is priceless.

ISA TINEO:   Cynthia’s just the best – more than we could’ve ever asked for. She is wise and has more experience in life than anyone I’ve met. Having her as our manager is a pleasure, but being able to call her a friend and family is even more important to me.

PONYBOY:   Gordon, your girlfriend Nika De Carlo is a very talented photographer and shoots many of Beechwood’s images. That’s pretty much a match made in heaven. Has she always photographed the band?

GORDON LAWRENCE:   We’ve shot with many photographers, but Nika definitely shoots us the most. She knows us all very well, so she somehow captures our personalities unlike anyone else in her photographs. She shot and designed both of our album covers, as well as the majority of our publicity photographs – guess I got lucky.

PONYBOY:   We wouldn’t be Ponyboy if we didn’t mention the incredible style that the three of you have. It seems very effortless and natural, as if you don’t really give a fuck. What’s your attitude on your style, both on and off stage?

GORDON LAWRENCE:   We just wear what we want to, whatever feels right at the time. Our styles have changed over the years as we grow, but it’s always very natural. What we wear on the street is what we wear on stage – there is no separation of “stage clothes” and our everyday looks. We get pretty much all of our stuff at Goodwills and places like that. I personally love going to military surplus shops, as well.

PONYBOY:  You’re still relatively new to the music world and to record labels. And we’ve probably read too many rock ‘n’ roll autobiographies, but what are your thoughts on the greedy corporate mainstream music world?

BEECHWOOD:   We are solely focused on our music, making it the best we can. We’re not businessmen, though we’re not stupid, but luckily we have Cynthia who is a kind of go-between for the business stuff and the artistic side of things. Hopefully we can make a lot of money and not get ripped off in the process.

PONYBOY:  What do you hope to accomplish as musicians and primarily with regards to Beechwood’s music?

GORDON LAWRENCE:   We just want to continue making great music, to tour the world, and make a lot of money so we don’t have to worry about ANYTHING else besides continuing to write, record, and perform our music. 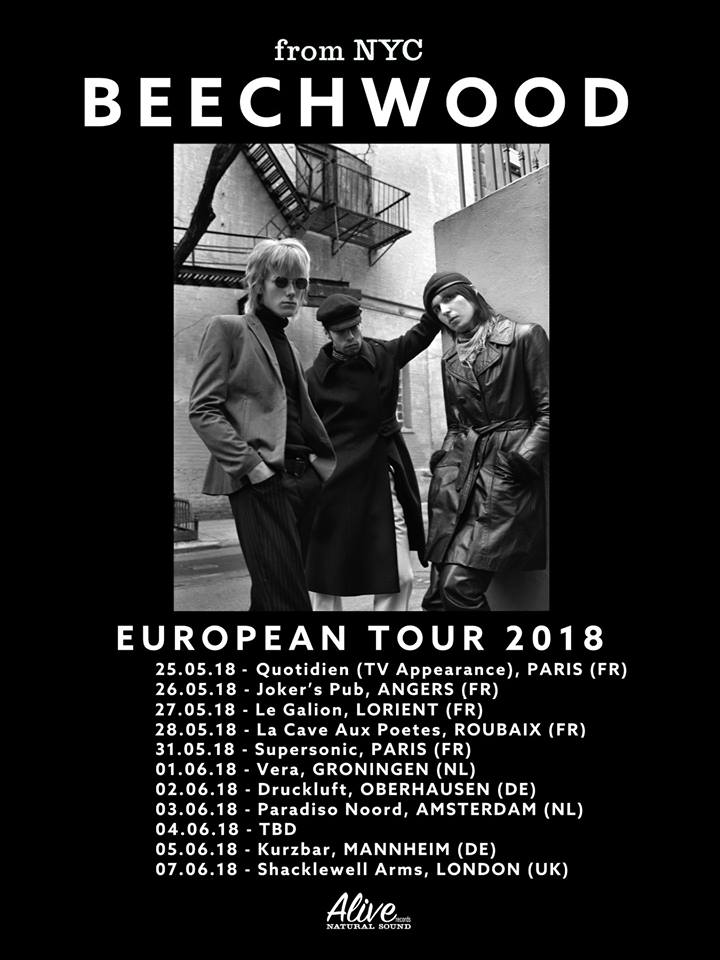