Baby Shakes are a New York City rock band formed in 2005. We first caught a performance some years back at a Jonathan Toubin event. And boy did they knock our socks off! The sight of 3 beautiful women, front and center, in black leather miniskirts and fishnets, playing their guitars probably harder than any male musician would, was so exhilarating! Sweet, yet tough, Baby Shakes demand attention with a powerful sound and stage presence. We caught up with the band recently for some fun photos and an interview, in sync with the release of their latest album, Cause a Scene. Catch them live if you are lucky enough to have them hit your hometown. You’ll be sure to be blown away! Photography Alexander Thompson. Stylist Hayley Griffin. 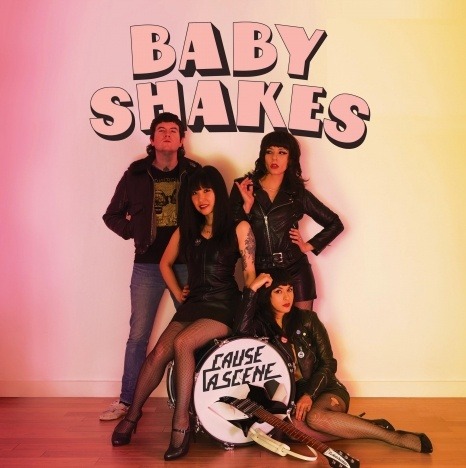 PONYBOY:  Your 4th full-length album was just released, titled Cause a Scene. But let’s go back a bit to 2005 when the band was first formed. Tell us how that happened.

BABY SHAKES:  Judy and Claudia met at a show at CBGBs years before, but it wasn’t until Judy’s roommate Ian, from one of our fave NY bands at the time “Some Action”, heard her jamming out to Chron Gen in her room one day. He suggested starting a band with Claudia, since she was looking for bandmates and had similar taste in music. Ian thought it would be a good fit and he was right! Claudia met Mary through our mutual friend, Avi Spivak (artist, Rebel Rouser), and introduced us all at Lit Lounge. The rest is history!

PONYBOY:   What band members have changed?

BABY SHAKES:   Only our drummers have changed over the years. Mary, Judy and Claudia have always been in the band. We’ve had about 12 drummers (lol), but our main guys who have played on our records are Joey Valentine (Star Spangles), Dave Rahn (Carbonas, Gentleman Jesse & His Men), Murat Akturk (Electric Shadows, Daddy Long Legs), and now of course our current drummer, Ryan McHale (who used to play in Nightbirds).

PONYBOY:   How would you say your music has evolved, from your first record to your most recent release?

BABY SHAKES:   We tried a few new techniques and different instruments on this record. We played different guitars to get different sounds, used different tuning (Nashville tuning on a Rickenbacker) on a few songs and incorporated a few new instruments we borrowed from friends, like a synth and a Moog organ. We even used a half-empty tequila bottle for percussion!

PONYBOY:  You’ve made 7 singles, 1 10”red, heart-shaped EP, a singles collection and 4 full-length records. Of all those, which would you say was the most difficult to make and why?

BABY SHAKES:  They all kind of had obstacles in their own way. Full-length albums are difficult because it takes so much to get things to sound how you want them to. Since we live in NY scheduling is difficult. Everyone is so busy and we all work so much so our main problem with recording these last 3 albums was trying to make enough time and spending long days and nights in the studio. After being cooped up for 14 plus hours, hearing the same songs over and over you start to feel like you’re about to lose it. But it all works out in the end and it’s worth the “torture”. Haha.

PONYBOY:   Which would you say is your favorite from the Baby Shakes catalogue? 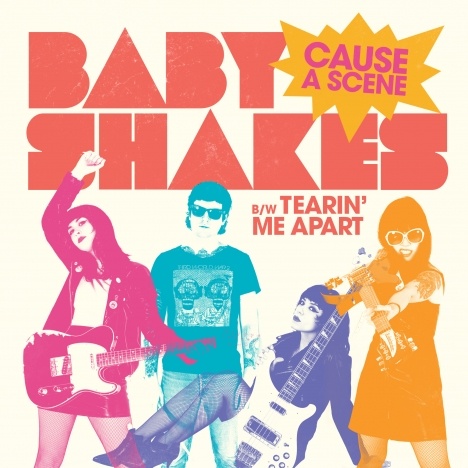 BABY SHAKES:   Hmm…tough call. We have favorite songs from each release and each is special because they make us think of where we were at that time. We’re partial to our first 45 on Douchemaster Records just because it was the very first record we ever put out into the world and we had no idea what it was going to be like. We traveled down to Atlanta to record, banged out the songs in a couple of hours, and Dave Rahn mixed them over the weekend. The sound was loud AF, raw and powerful with a bad ass Dollsy/’77 punk sound. We think the first 45 got a lot of attention locally and abroad because it shocked so many people.  Everyone thought it would sound a certain way, like really poppy and sweet – something they’d expect from girls in a band. But then we all came out with a set of balls that we showed to the world. Haha. We definitely established our sound with that record.

PONYBOY:   Tell us all about your Cause a Scene music video, the making of it and the inspiration. We see a lot of Brooklyn regulars in it!

BABY SHAKES:  We had so much fun making this video especially because so many of our friends played roles in it. Just to name a few, we had Groovy Baby Hayley and a couple of the Groovy Babies in the crowd shots, Hersh from Dirty Fences/Brower played a cop and Sushi Chef David Bouhadana as a scared yuppy. Everyone was so great. Our friends are the best!! The inspo behind this video, along with the idea of the song, is that Baby Shakes are portrayed as giant monsters, drinking tequila, playing instruments, getting rowdy and recklessly stomping around NYC. At first people are terrified and they run away, but that all changes when we give Hayley (who does a great job at channeling Fay Wray) our record and she really digs it. People start listening to the music and in the end everyone is dancing and partying with us. We’ve often been described as Tequila Monsters, or as the Baby Shakes Hurricane, because we’re very festive on tour and when we play live. Hahaha that’s kind of the premise of this song and the motto of our band – we’re here to party! If you wanna shake it up and have fun too, you can roll with us. If not…sucks for you!!

PONYBOY:   What would you say has influenced the band the most, as a whole?

BABY SHAKES:   The 70s!! (a bit of the 60s and 80s, too); a bunch of music from that era, like ‘77 punk, glam rock music and style. That whole snotty, glitzy and provocative nature of art, music, fashion and culture. Chuck Berry/Beatles/Ramones are gods to Baby Shakes.

PONYBOY:  Tell us about your relationship with DJ Jonathan Toubin? He seems to be very supportive of your band and music.

BABY SHAKES:  Jonathan Toubin is like a rock’n’roll angel/alien sent to us from the planet Texas. We love him so much and always have soooo much fun working with him. He’s truly devoted to making everyone have such a good time and it shows. Try to spend 5 minutes with that guy without cracking a smile. You can’t! He’s just so funny and jovial. Don’t even know how we got lucky enough to work with him so much. Claudia used to bartend Wednesday nights with him at Motor City, and that’s where we all met him. He booked us a few times and really took to our band. We hit it off right away and work really well together. We’re happy to have him as a friend of our band.

PONYBOY:   The look of the band is strong, as far as clothing and a sort of rock’n’roll “uniform”. Is it something that you’ve put a lot of effort into? Or is it more of a thrown together sort of thing?

BABY SHAKES:   Hahaha. Think it’s thrown together most of the time. It’s like a uniform. Whenever we try to stray from our denim and leather jackets, leather skirts and fishnets look, it just doesn’t seem or feel right.

BABY SHAKES:   We started Lil’ Chewy Records back in 2009, when we urgently needed to get a 45 out right before tour. We couldn’t find a label to press it in that time frame, so we ended up doing it ourselves. After that we just kept releasing music ourselves. We like to have the control to do things how we want and when we want.

PONYBOY:   The music industry has surely changed since you first formed in 2005, with the growth of the internet and social media. How has that affected Babyshakes directly?

BABY SHAKES:   We used to go to Kinko’s to make flyers and then post them all over the East Village and Lower East Side, which would take FOREVER. The internet and social media boom has helped get the word out a lot easier and faster. It’s a great tool for bands who are DIY.

PONYBOY:   Tell us what you have encountered, as far as sexism in the music industry and with touring? Being 3 women in a band…

BABY SHAKES:   People can be really small-minded. We’ve definitely encountered a fair share of creeps over the years…nothing we can’t handle. Overall, we think we’ve earned the respect of our fellow musicians in the scene and we’ve won the hearts of many skeptics over the years. People can talk, but it’s our job to prove them wrong and we’ve done it so many times ;) Can’t tell you how many times we’ve gotten this compliment after a show, “At first I thought you were gonna suck because you’re girls, but then you were actually really good and I was surprised.”

PONYBOY:   We’ve seen you 4 backstage, and you’re like a fine tuned machine. You seem to all work quite well together. Is this from years of performing, recording, rehearsing?

BABY SHAKES:   Aww, thanks! Hahaha..guess over the past few years it all kinda clicked somehow. We just all really enjoy what we do and enjoy being around each other. Whatever else we’ve gotta deal with in life that sucks, we pour all that stress and pent up energy into playing, so it’s kind of an escape. At least that’s how we look at it.

PONYBOY:   You have an upcoming Japanese tour. Do you have a big following in Japan?

BABY SHAKES:   This will be our 4th time touring Japan and we’re sooo excited. It’s one of our favorite countries to play because the audiences are so much fun and energetic. They just looooove music – especially power-pop and punk, so they get our band so our shows go over well. We have a label in Koenji, Tokyo that releases our singles and CDs called Base Records. We’re really good friends with the owner, Toshio, and he has a rad record shop that sells punk/powerpop/hardcore, plus a lot of other great underground music from around the world. He books our tours and he always does such an amazing job!

PONYBOY:   Your band has toured extensively throughout the world. Where do you enjoy performing the most?

BABY SHAKES:   It’s so hard to pick just one city. We can really have fun anywhere. Literally, we’ve been in the middle of nowhere performing in front of people who we can’t understand and have no idea what we’re about…but it’s always enjoyable. We try to make the best out of every show. There are some cities where we have a lot of friends that also play in bands we like, so that’s always a plus. We’ve had some of our most memorable shows in Japan, Sweden, London, and Rome – mostly because we have really good friends in those cities/countries.

PONYBOY:   Who would be your dream band to tour with?

PONYBOY:   What’s in store for the band after your Japanese tour?

BABY SHAKES:   We’re planning to head back to Europe to promote the new album, but we’d like to go back to Scandinavia since it’s been awhile, and maybe some other countries we haven’t been to before in Eastern and Northern Europe. We’ve got a top secret exciting collab in the works. One of our biggest goals is to tour Australia. Hope we can get out there in 2020!!