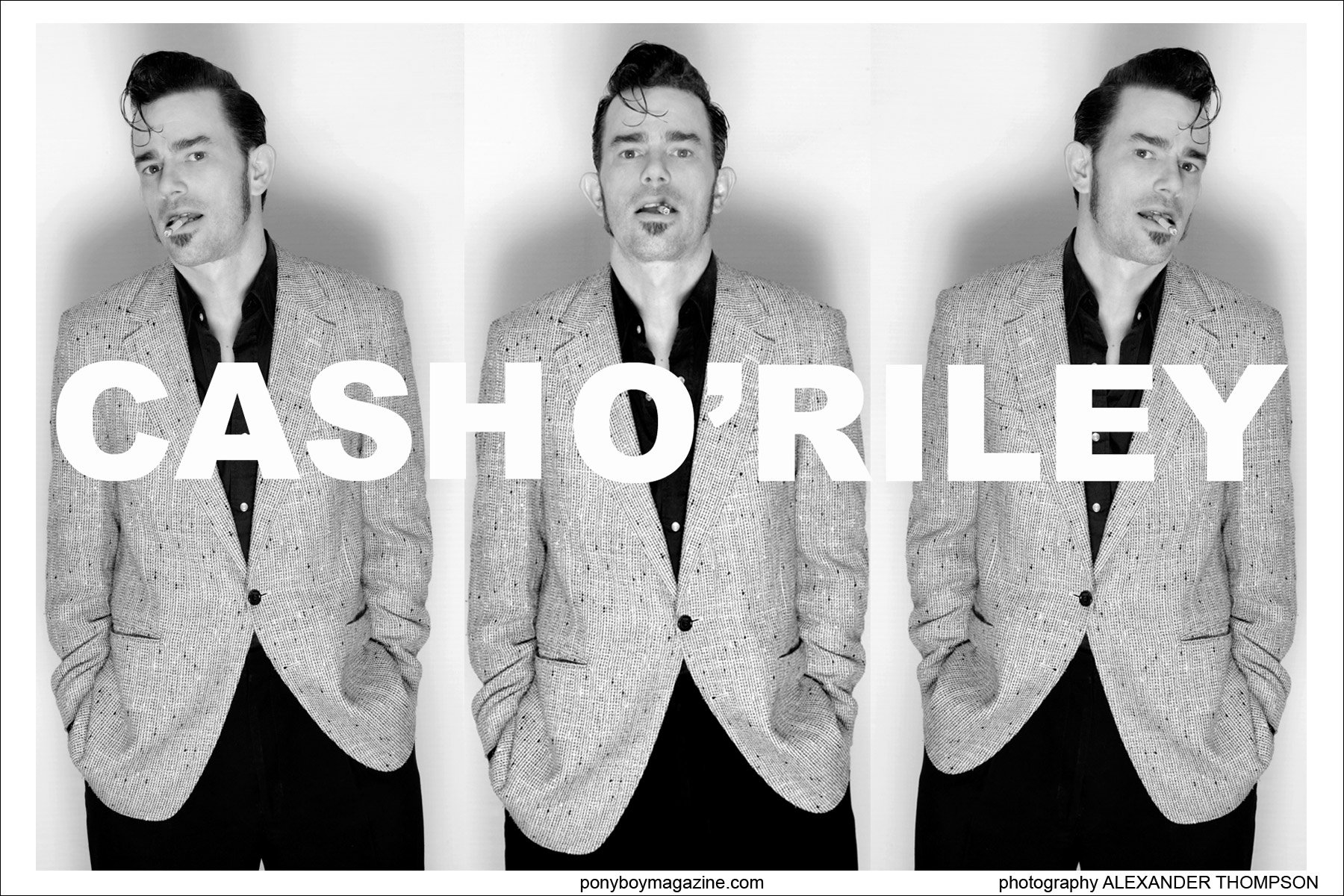 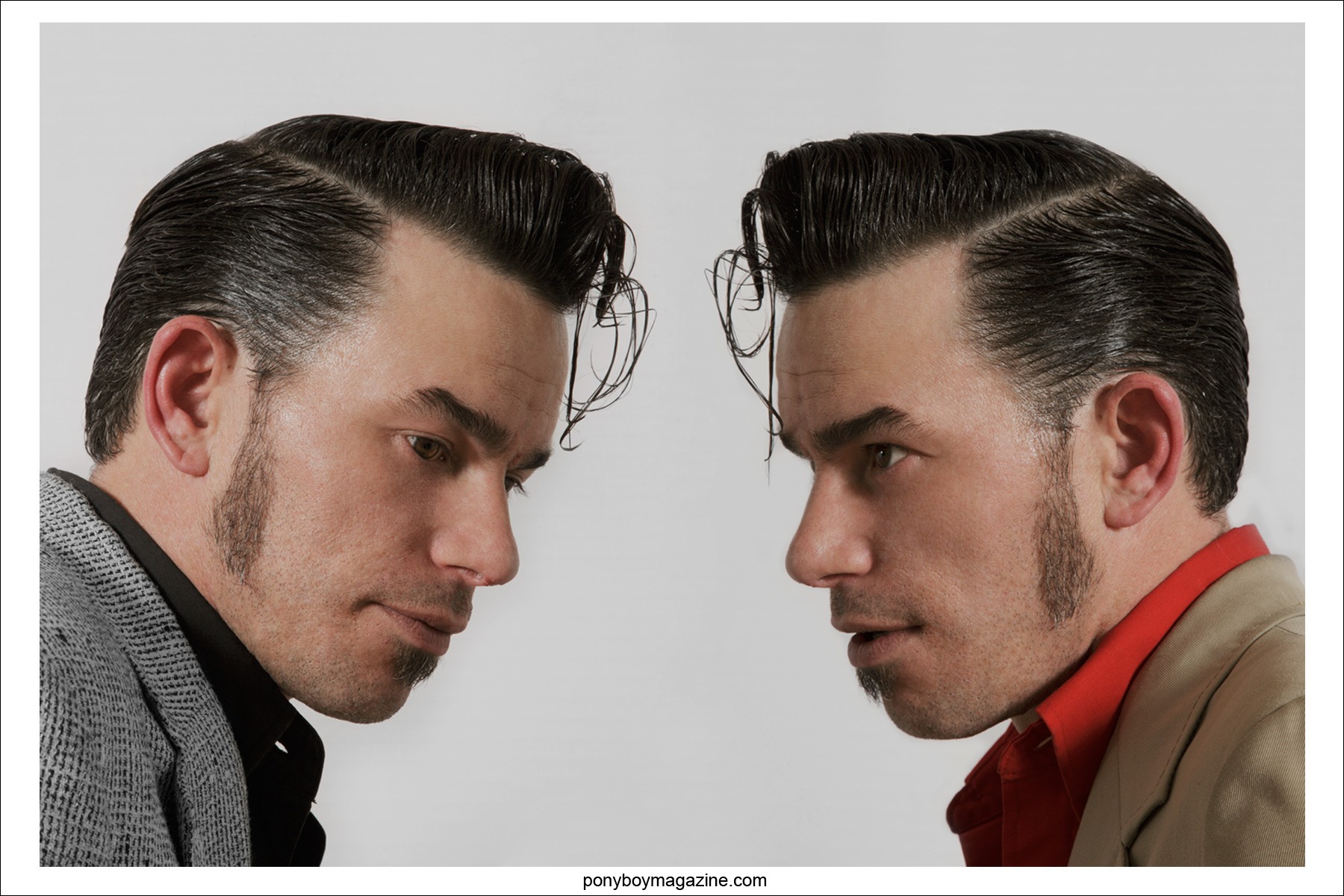 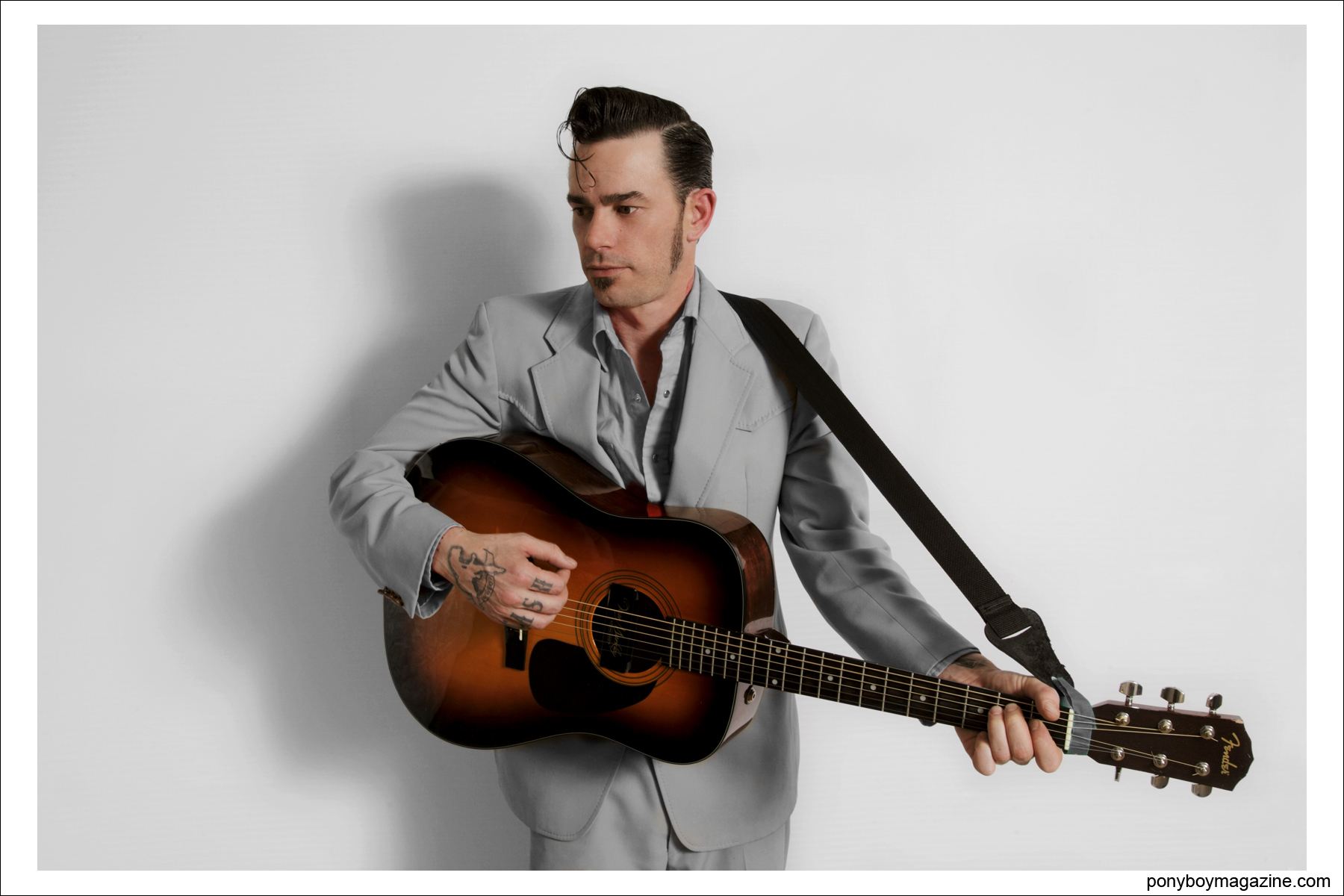 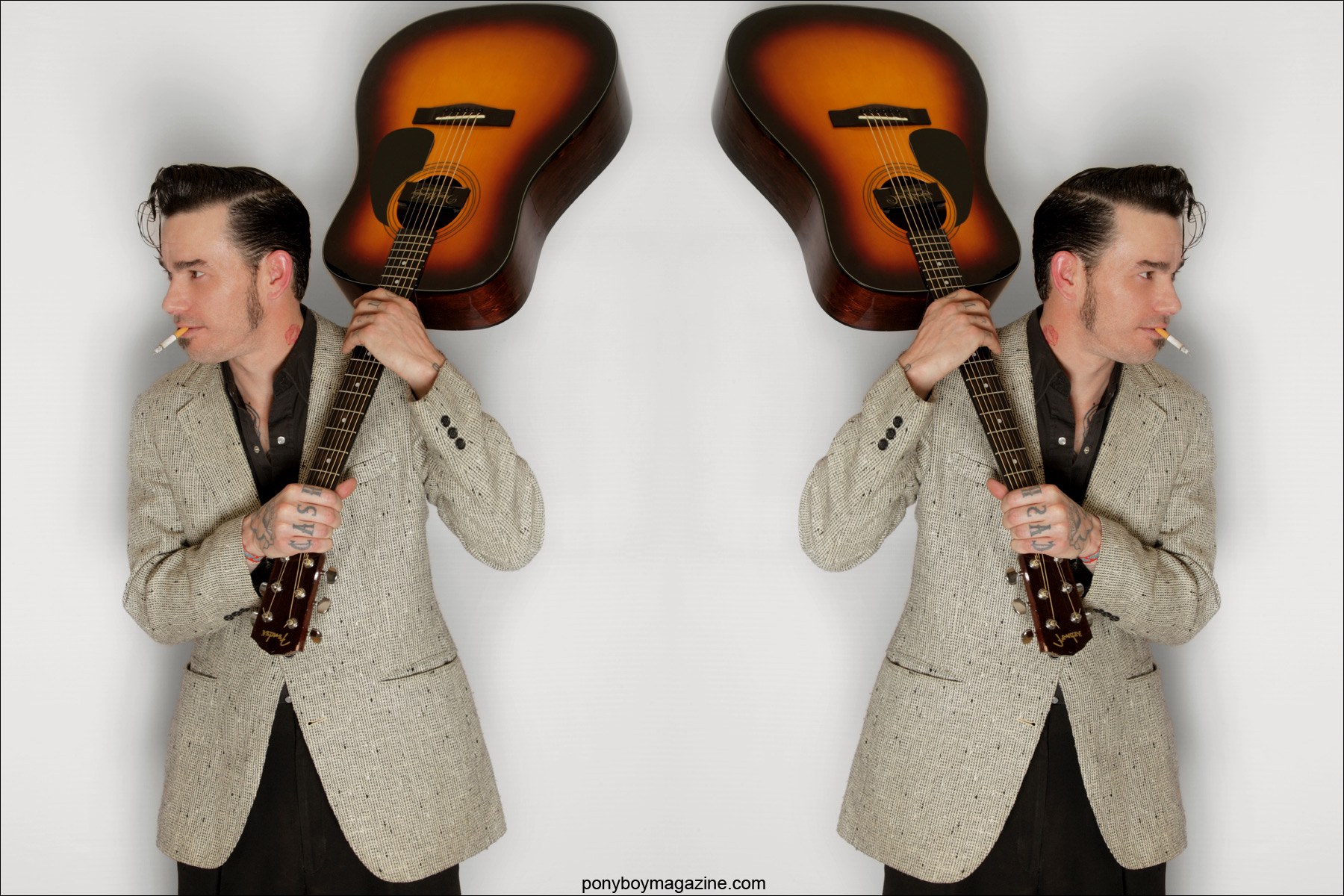 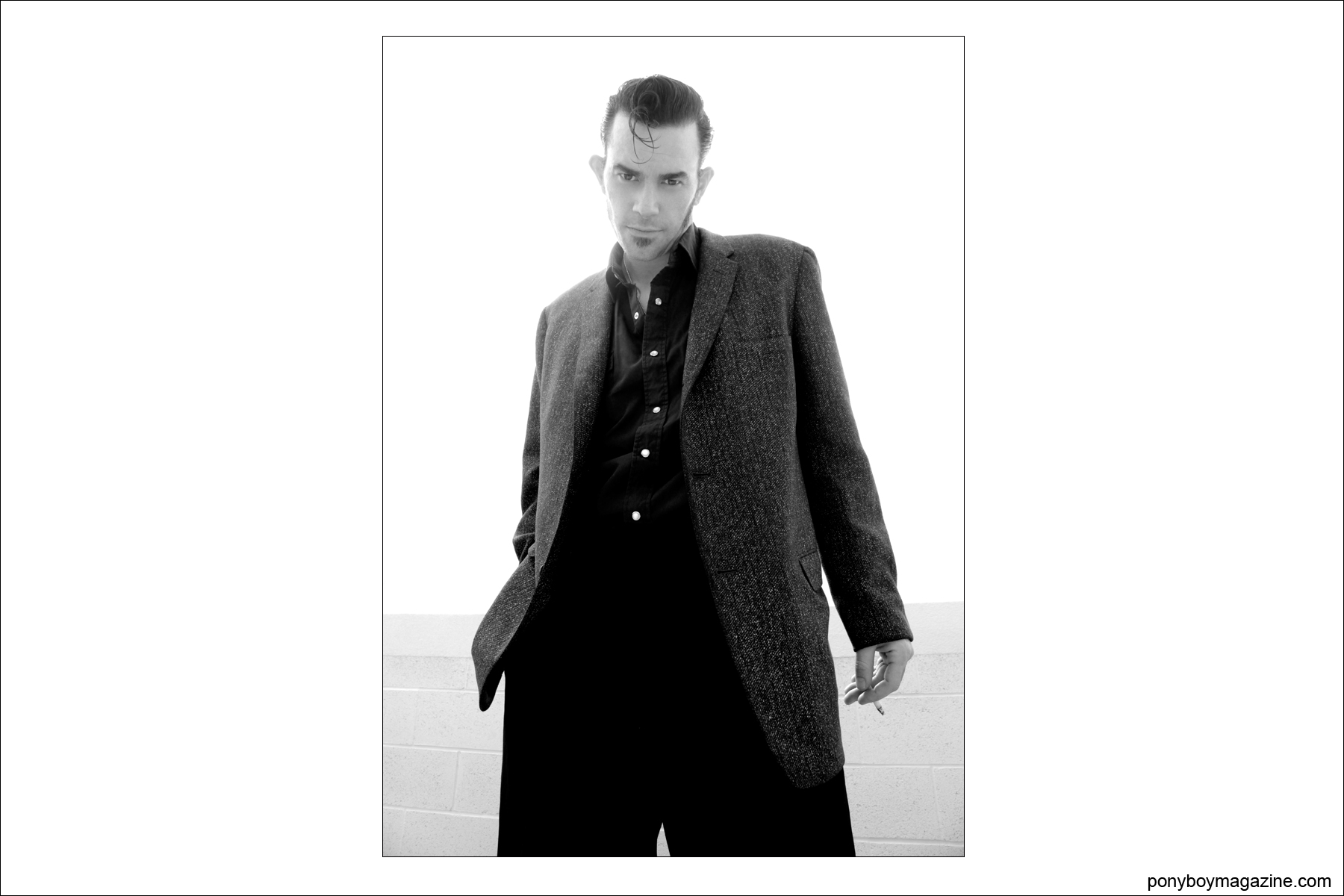 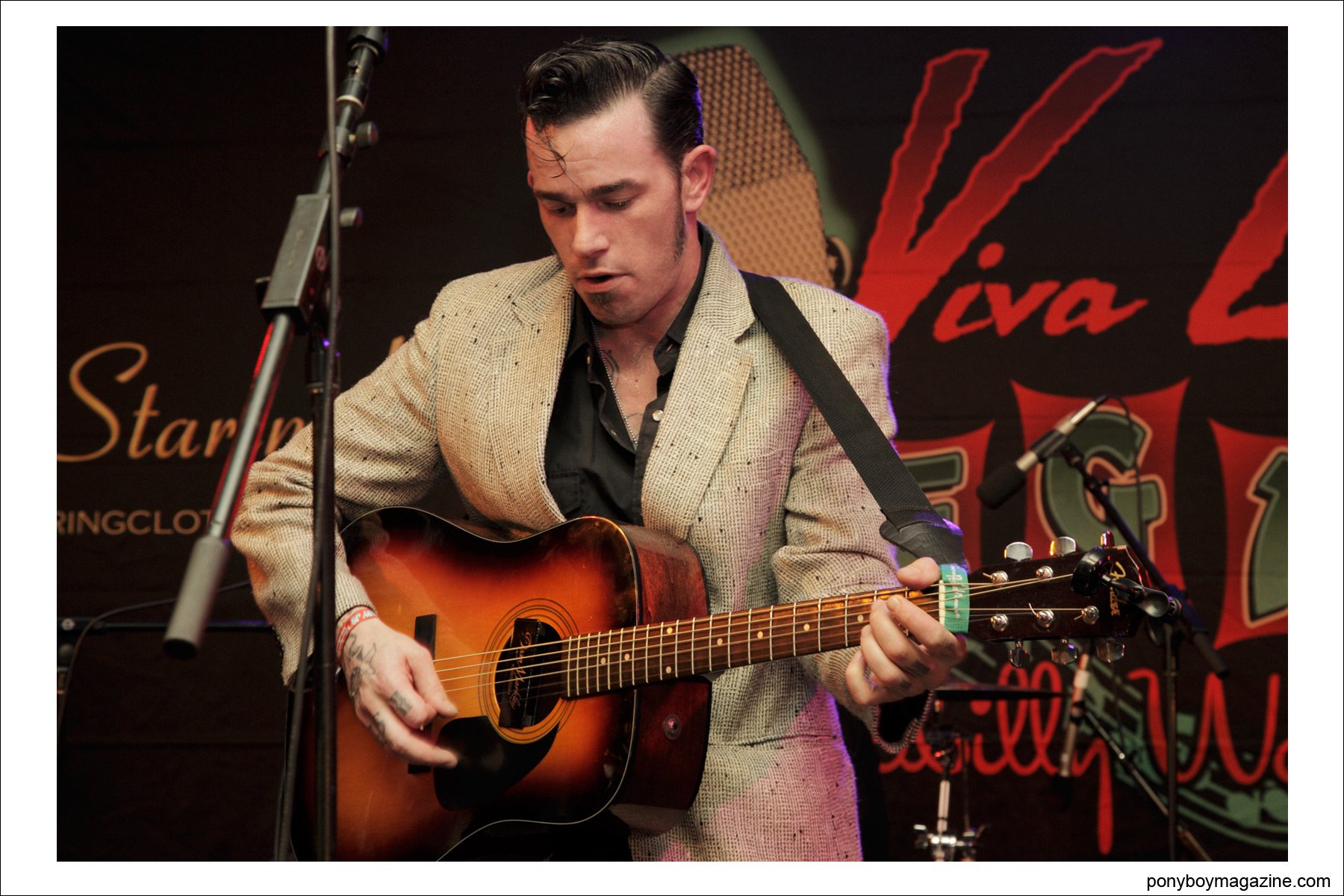 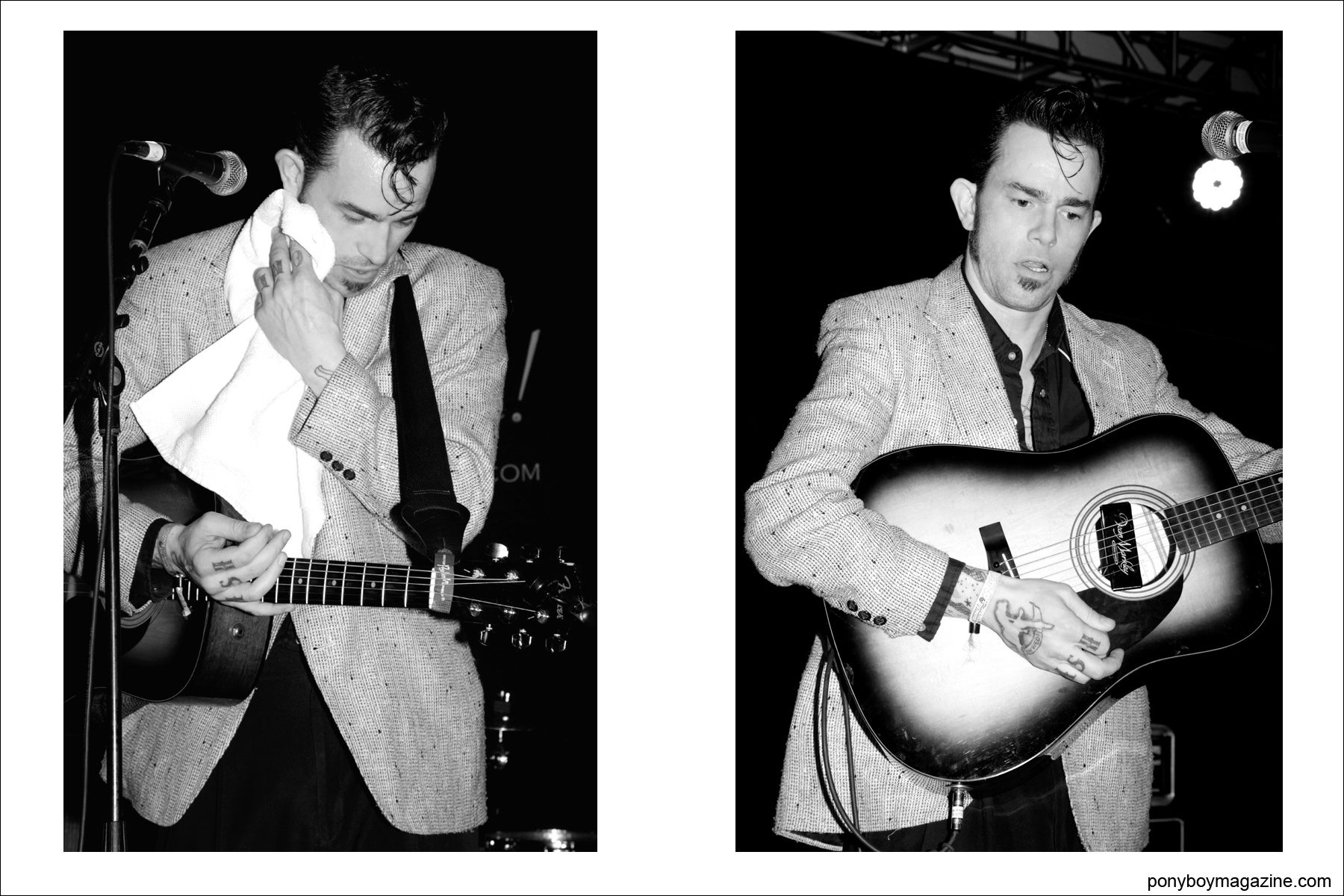 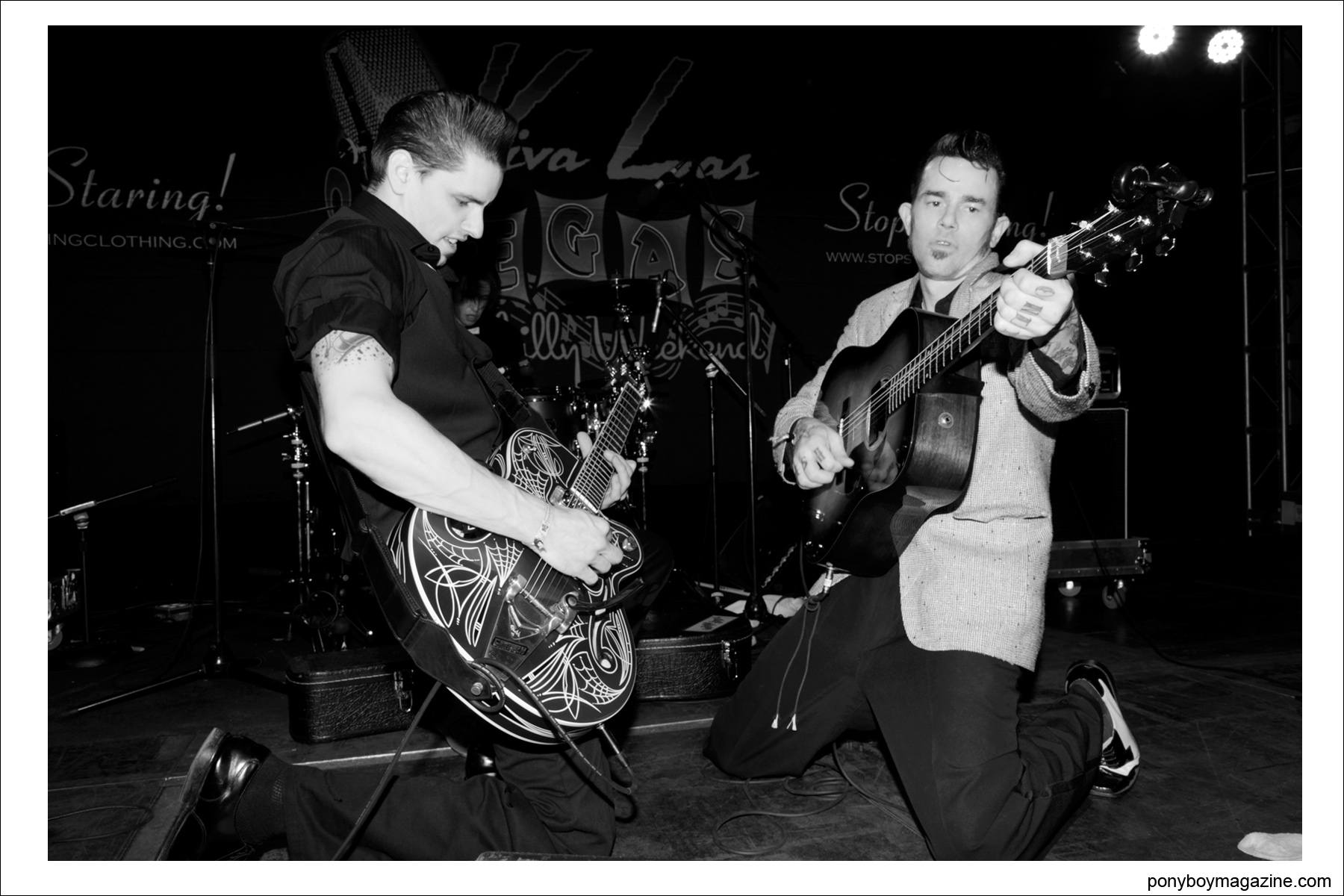 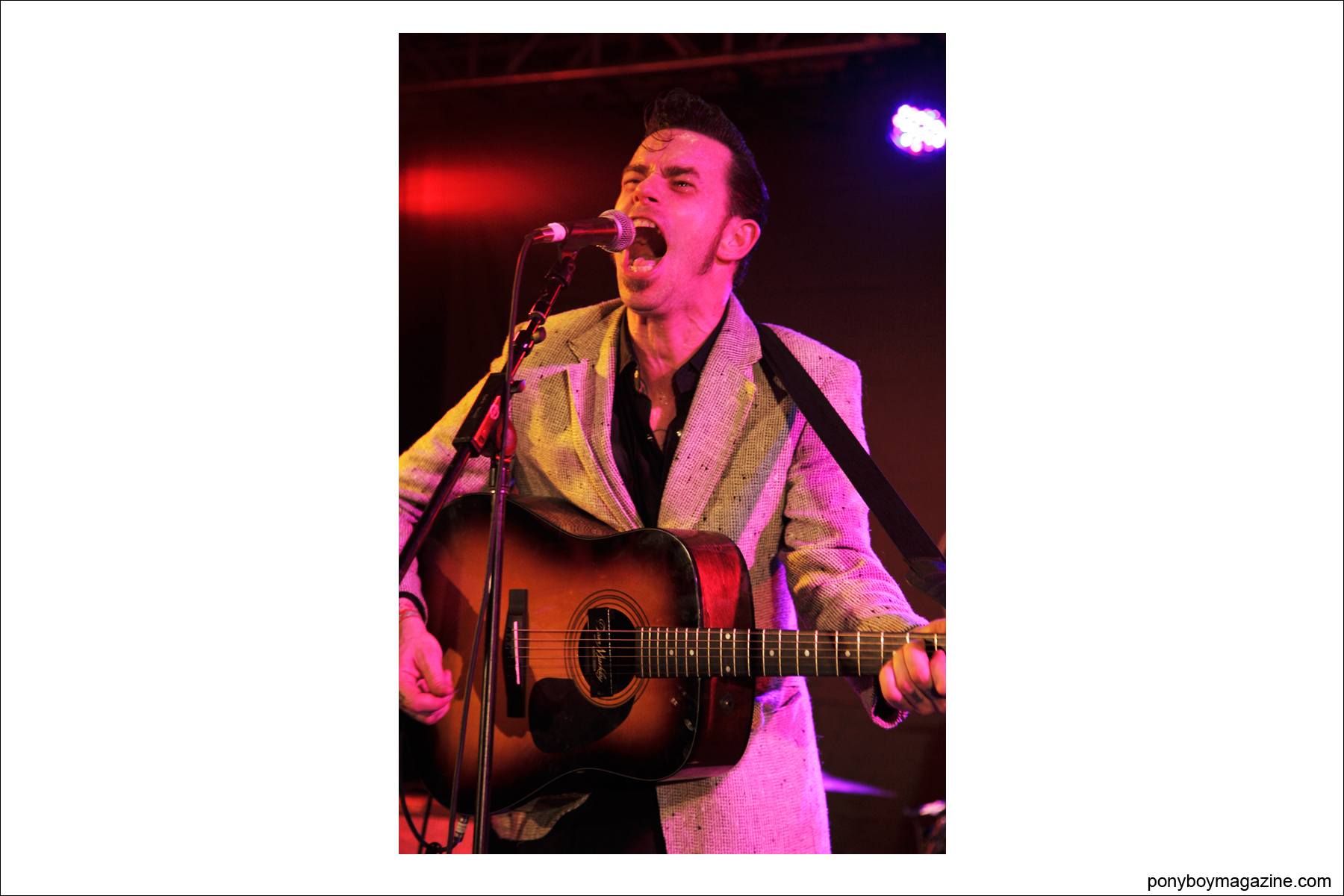 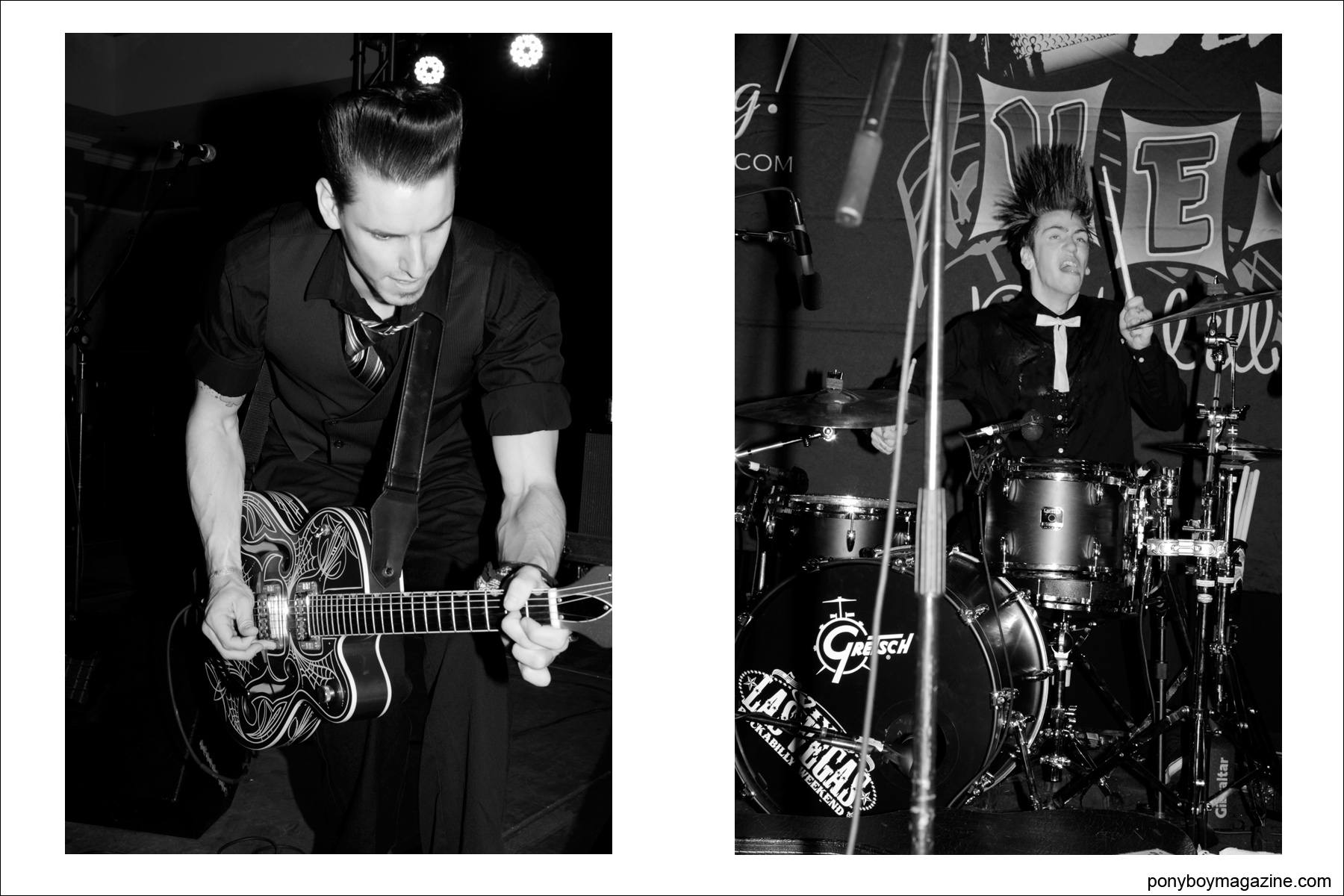 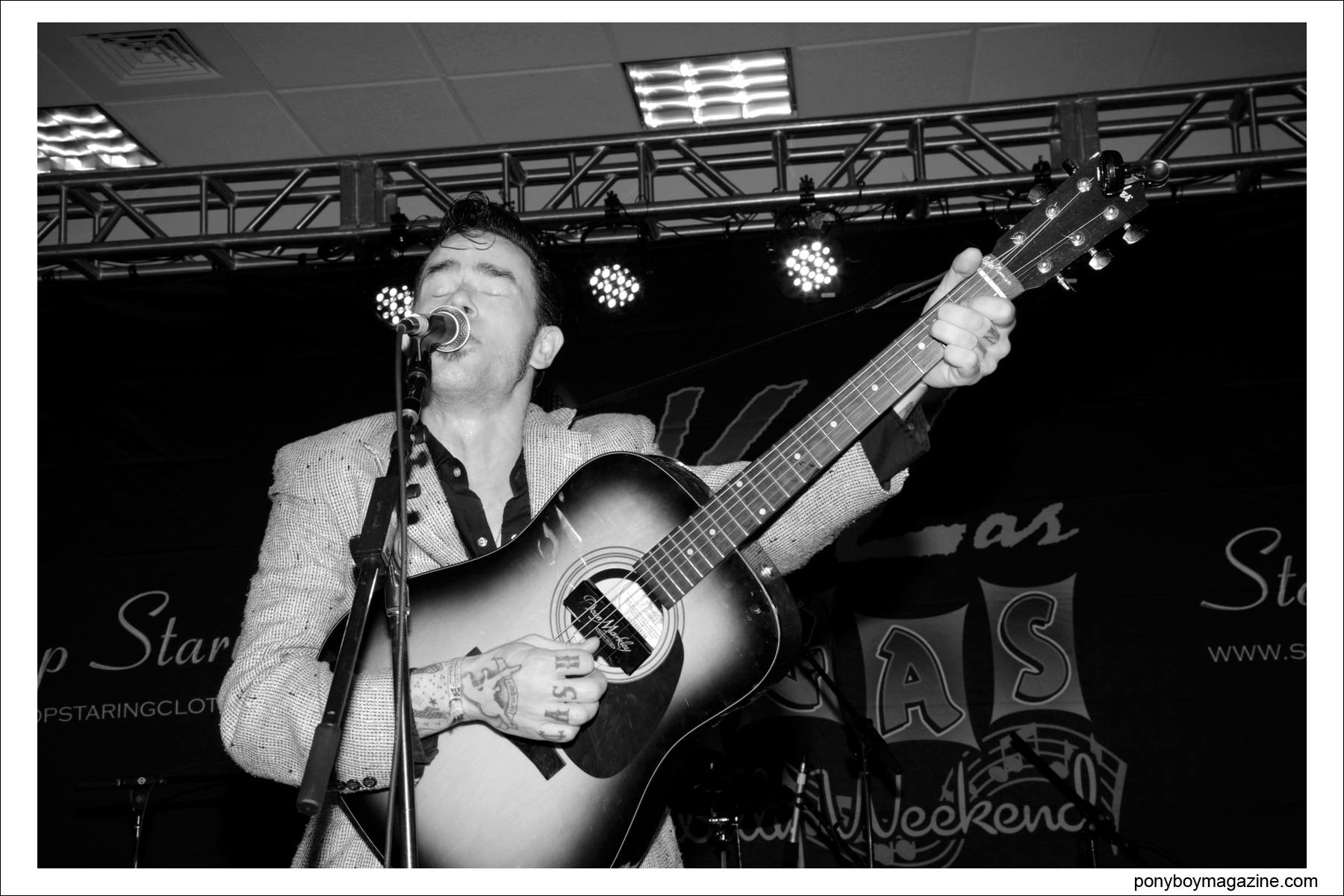 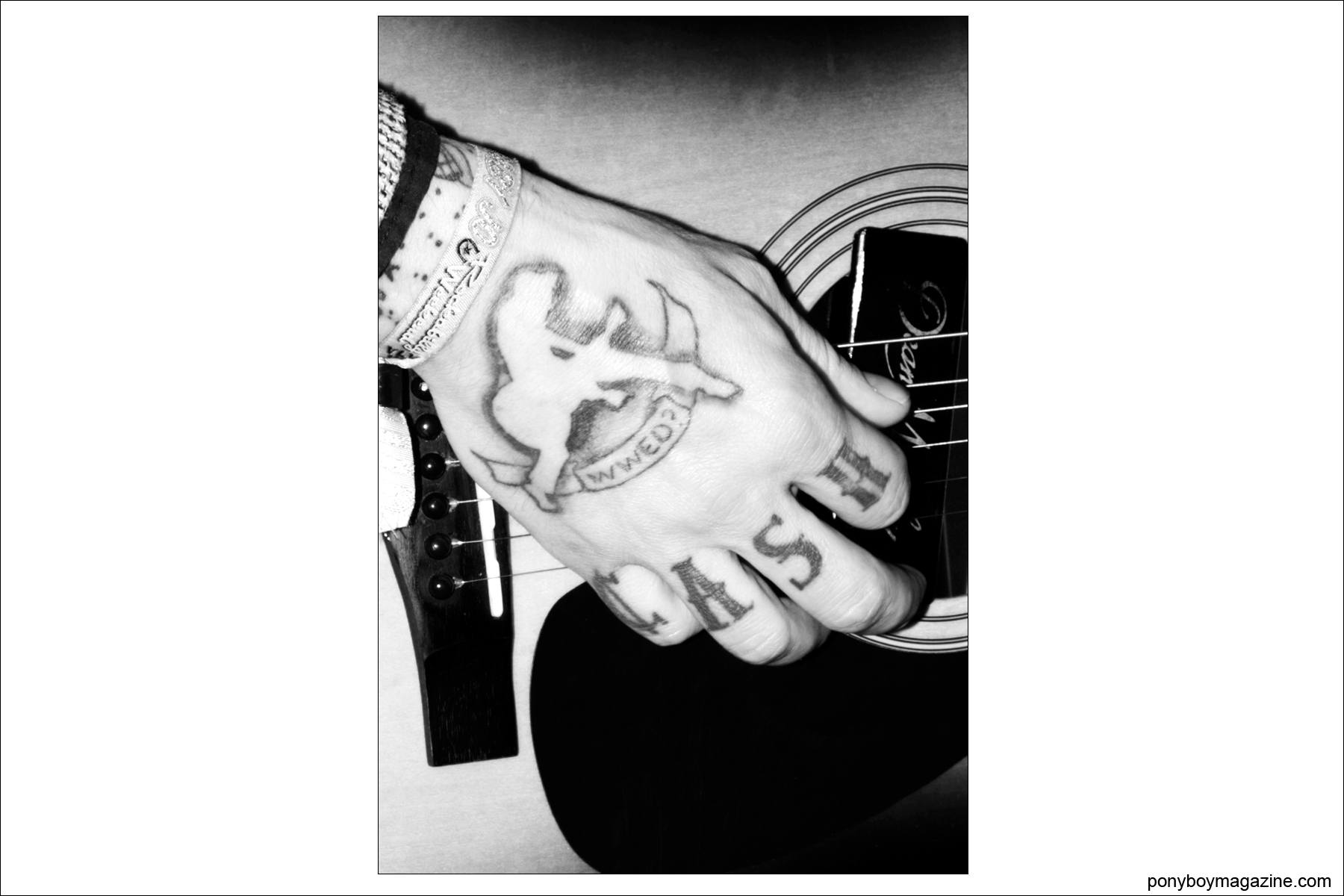 Ponyboy caught up with Rockabilly musician/singer Cash O’Riley a few months after our photoshoot in Las Vegas, where Cash was performing at the annual Viva Las Vegas weekender held by founder Tom Ingram. Cash seemed nervous in front of the camera, but loosened up as our session progressed and we ended up having some laughs and great images.

PONYBOY: Cash, we first saw you perform at Viva Las Vegas a few years back. Please tell us a bit about your background?

CASH O’RILEY: My first out of state gig was Viva Las Vegas in 2002 when it was still at the Gold Coast. Barry Klein, a writer for the Rockabilly Hall of Fame, saw me in Detroit on the Motor City Spinout and asked if I’d be interested in a side stage performance for VLV. For no pay and not even a demo recorded, I purchased bus tickets for the band and we hit it. We had such a great showing that Tom had already had an email waiting for me when I got home, inviting me to the mainstage for the next year.

PONYBOY: When and how did you first start getting into music?

CASH O’RILEY: I got my first guitar from my grandad at four years old while visiting Kentucky and it never left my side. I knew then and there that the music had chosen me. I could never afford or even cared for lessons. I watched what everybody I respected did and made it my own. I always cared about the sound and feeling much more than the technical aspects. It’s always been very emotional for me.

PONYBOY: Who have been your musical inspirations?

CASH O’RILEY: My uncle David Montgomery first and foremost. Growning up we moved alot and I was exposed to and liked an array of styles and bands. I grew up in the country and the city. If I had to name a few, it’d go a bit like this…Elvis Presley, Hank Williams, Farion Young, John Cougar, Bob Dylan, The Ramones, the Cult, Jerry Lee Lewis, Dean Martin, Johnny Cash, Tom Petty, Ray Charles, Motley Crue, Prince, Jimi Hendrix, Johnny Cash and Patsy Cline, Misfits (Danzig), Agent Orange, Jackie Wilson and just about anything written by Otis Blackwell.

PONYBOY: How many albums have you recorded?

CASH O’RILEY: I have two full lengths, “Booze, Lust, Lies & Heartache” and “Get Lucky, Break Down or Die“. Also a couple of live projects that are out of print, the “Jackson County Jail” EP and one just out “DownRight, It’s an O’Riley Christmas” in December 2013.

PONYBOY: You’ve had some lows. Please tell us a bit about that? Did you get inspiration from those experiences for your music?

CASH O’RILEY:  Ha, ha! I sure have, but I suppose that’s life. In the last two years alone I went through my second divorce, rolled my van, spent some jail time, severed my right index finger and topped it all off with a stroke! Yes, my music reflects my life. I only write about things I know, my experiences. And I try to write in a way that can be generally related to and completely honest.

PONYBOY: What are your thoughts on the modern day rockabilly scene?

CASH O’RILEY: Everyone seems to be rockin’ and havin’ a blast, so that can’t be bad.

PONYBOY: Tell us about your stroke?

CASH O’RILEY: I’ve been to jail, jumped off a train in Kansas City, and have managed to hold up. But I’ve never been more scared in all my life when the doctor told me I had a stroke. It was caused by stress, a hole in my heart, a honky-tonk lifestyle and triggered by a very stimulating evening with my lady. Once the doc told me I could bounce back, I was determined and back onstage the night after I was released from the hospital.

PONYBOY:  And how did getting on TLC occur?

CASH O’RILEY: While I was in the hospital I was medicated and browsing the internet. TLC had a casting call posted on their site specifically for anyone having gone to the E.R. on a sexually related incident. I answered and when they researched me, the producers really dug my music and decided to not only use my original songs in the segment, but have me playing live and not a re-enactment.

PONYBOY: Amazing. Will you be touring anytime soon?

CASH O’RILEY: I’ve been battling this winter out all over the Midwest. But I will be in Vegas again this April with a few dates there and back. And this summer and fall I’ll be all over, especially the East Coast and Southern states.

PONYBOY: Any new recordings in the works?

CASH O’RILEY: Absolutely. I’ve been working on my third full length album and have gotten some demos and tracks recorded for it. But I’m in-between and shopping labels. So hopefully it will be getting out there soon.