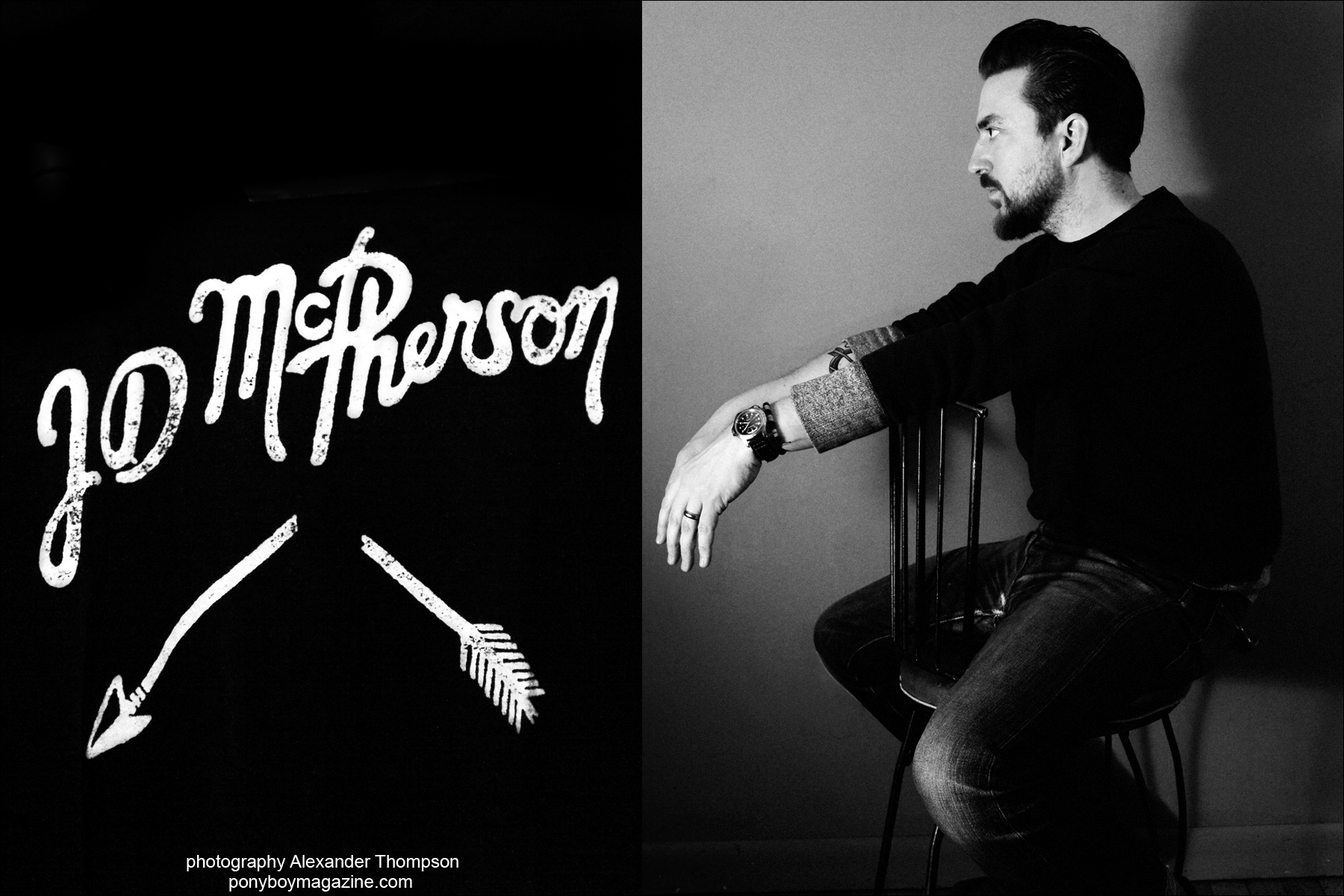 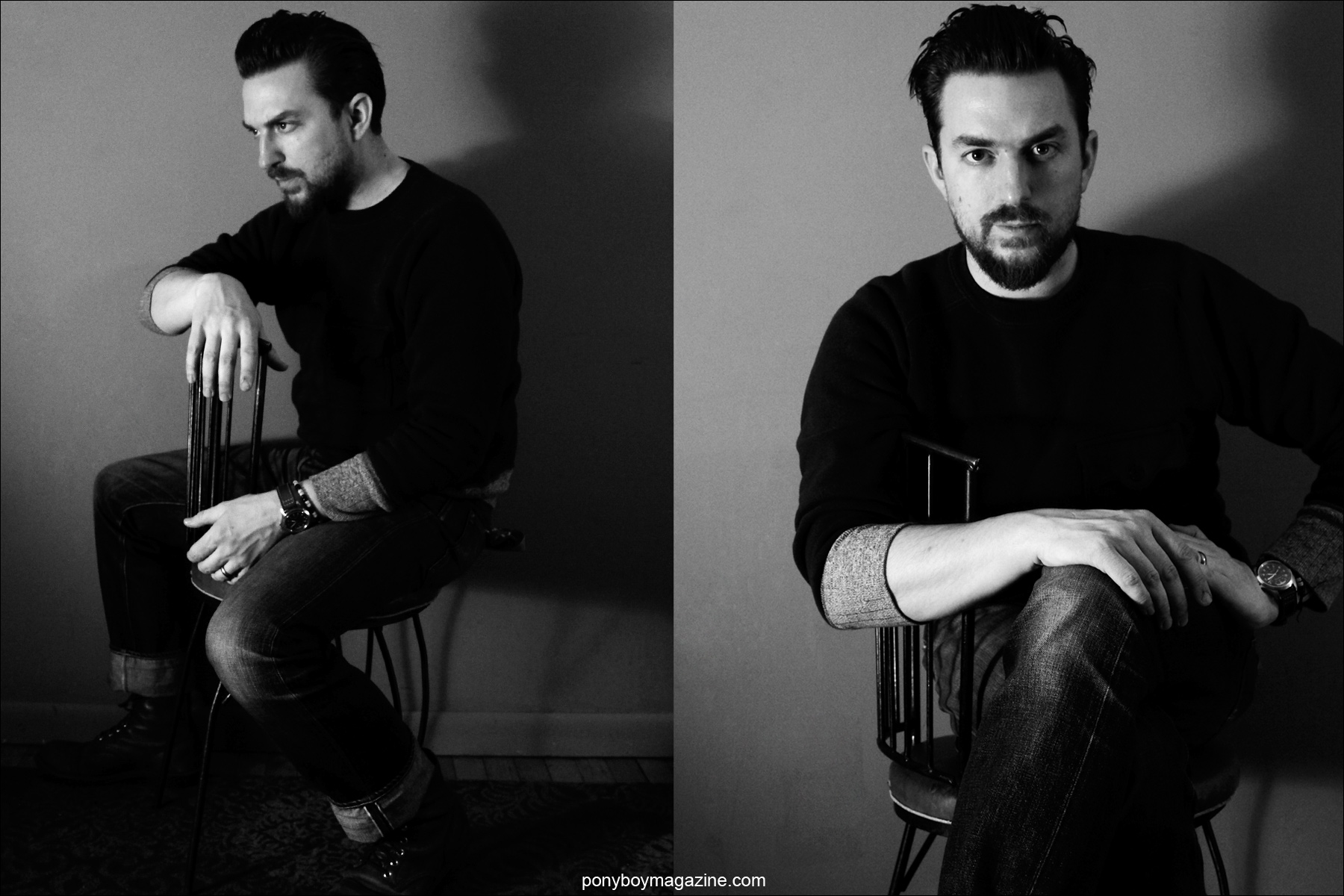 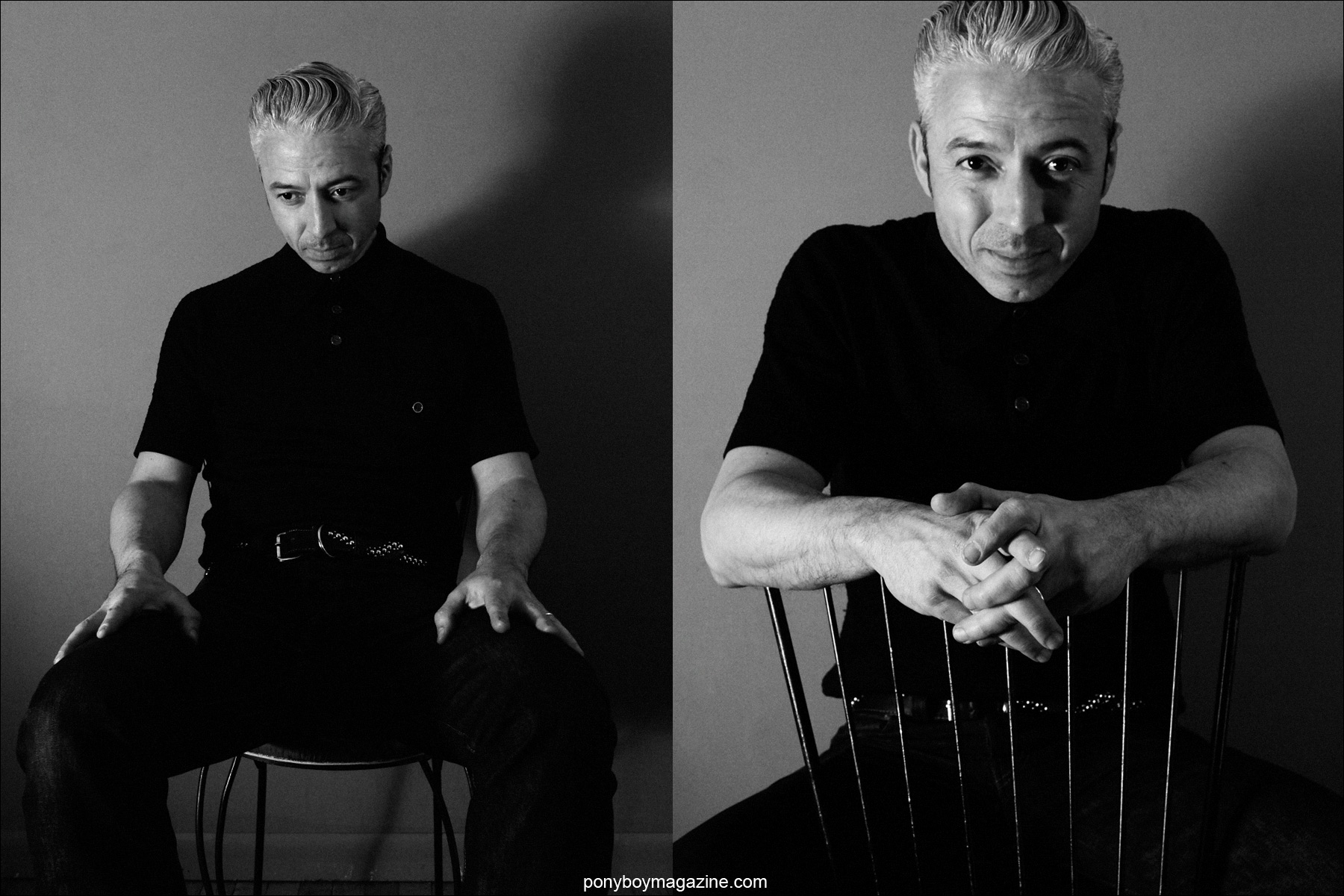 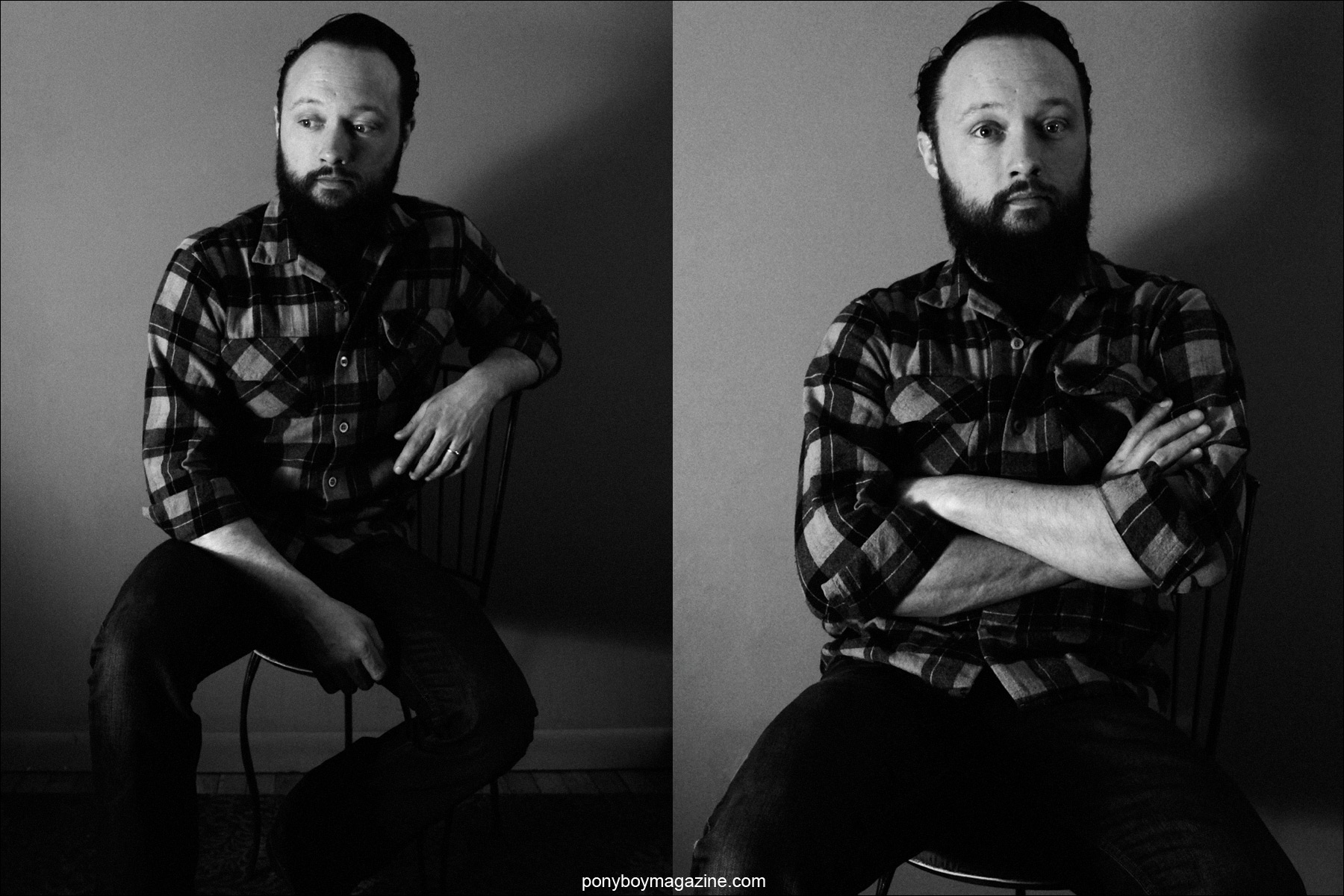 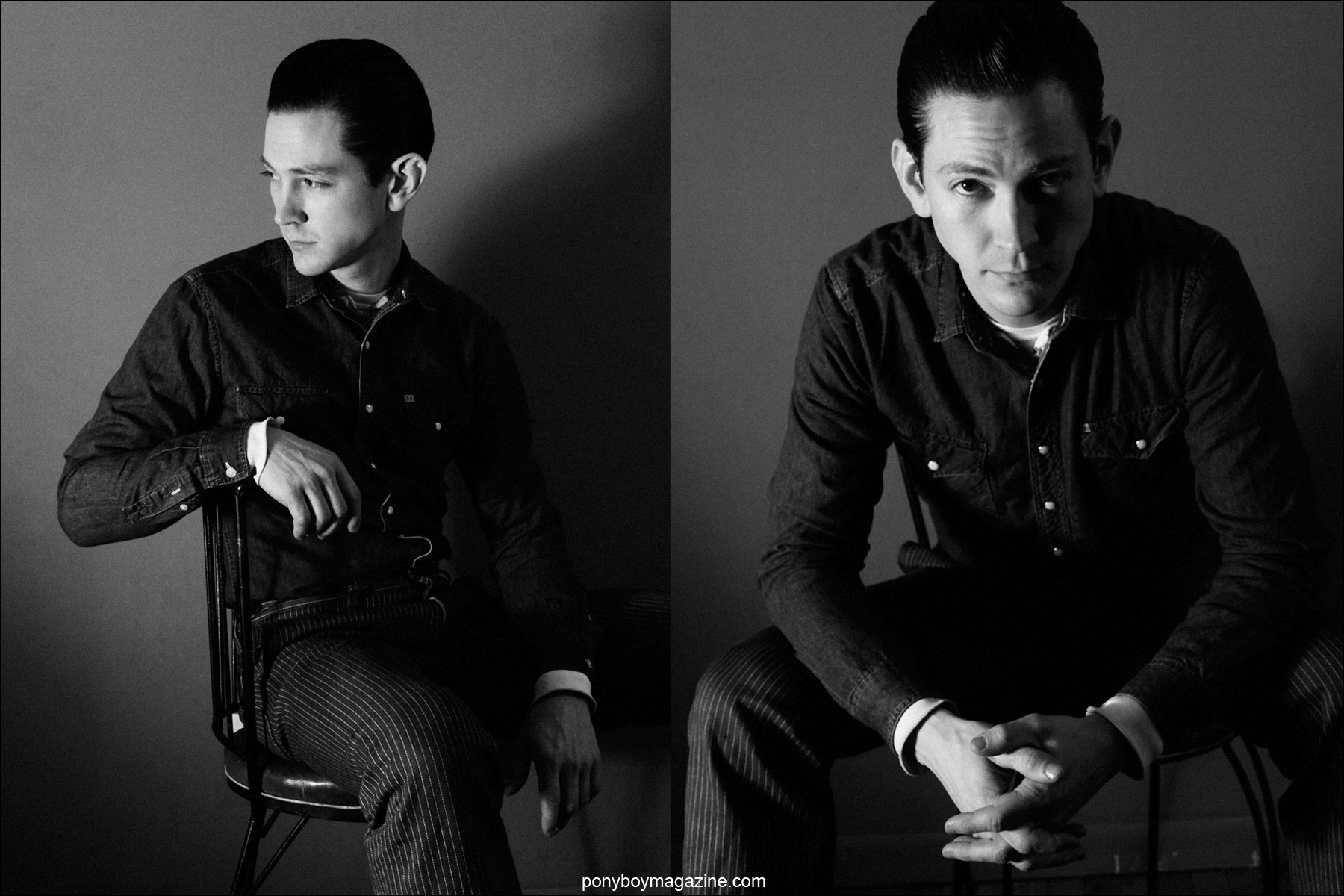 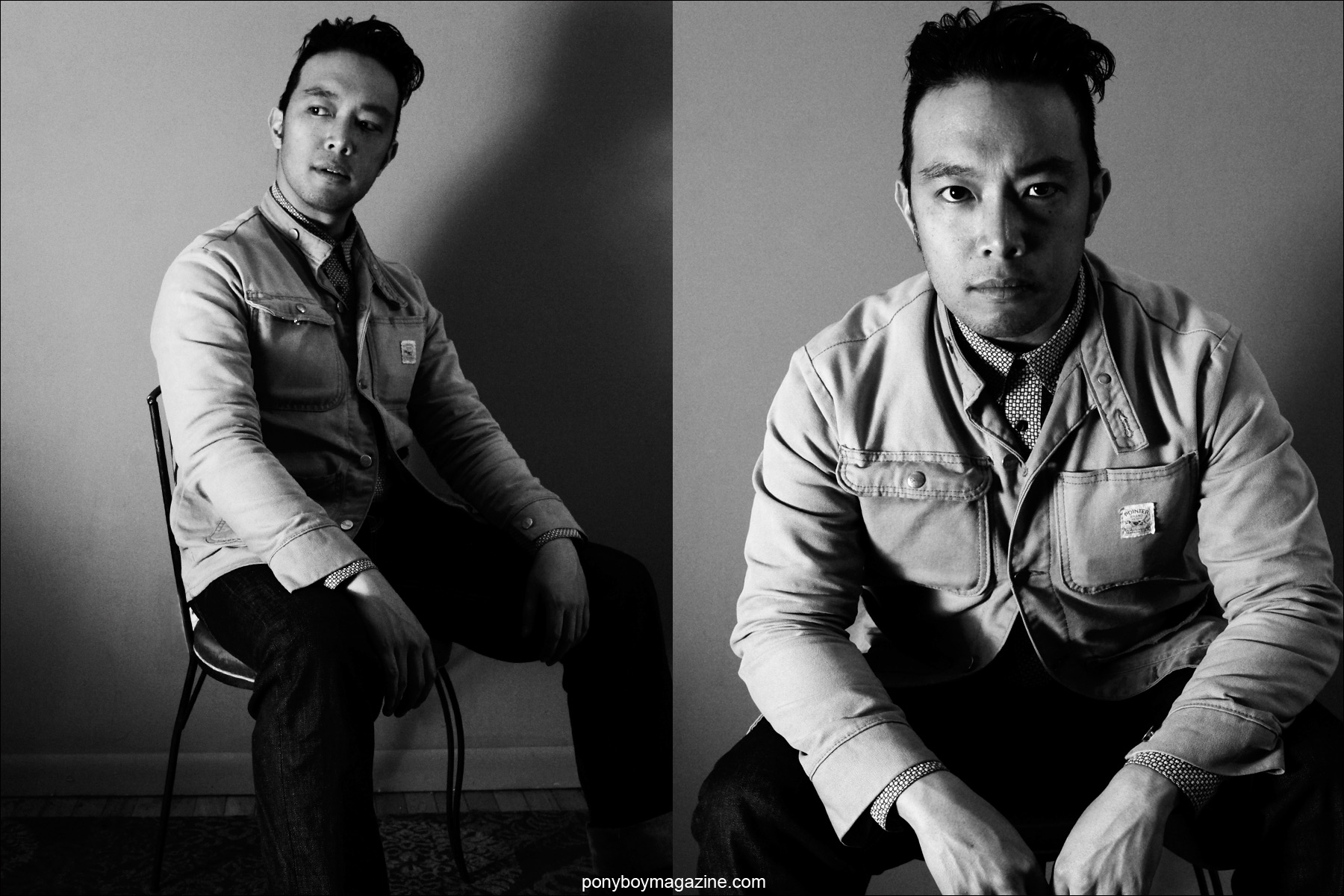 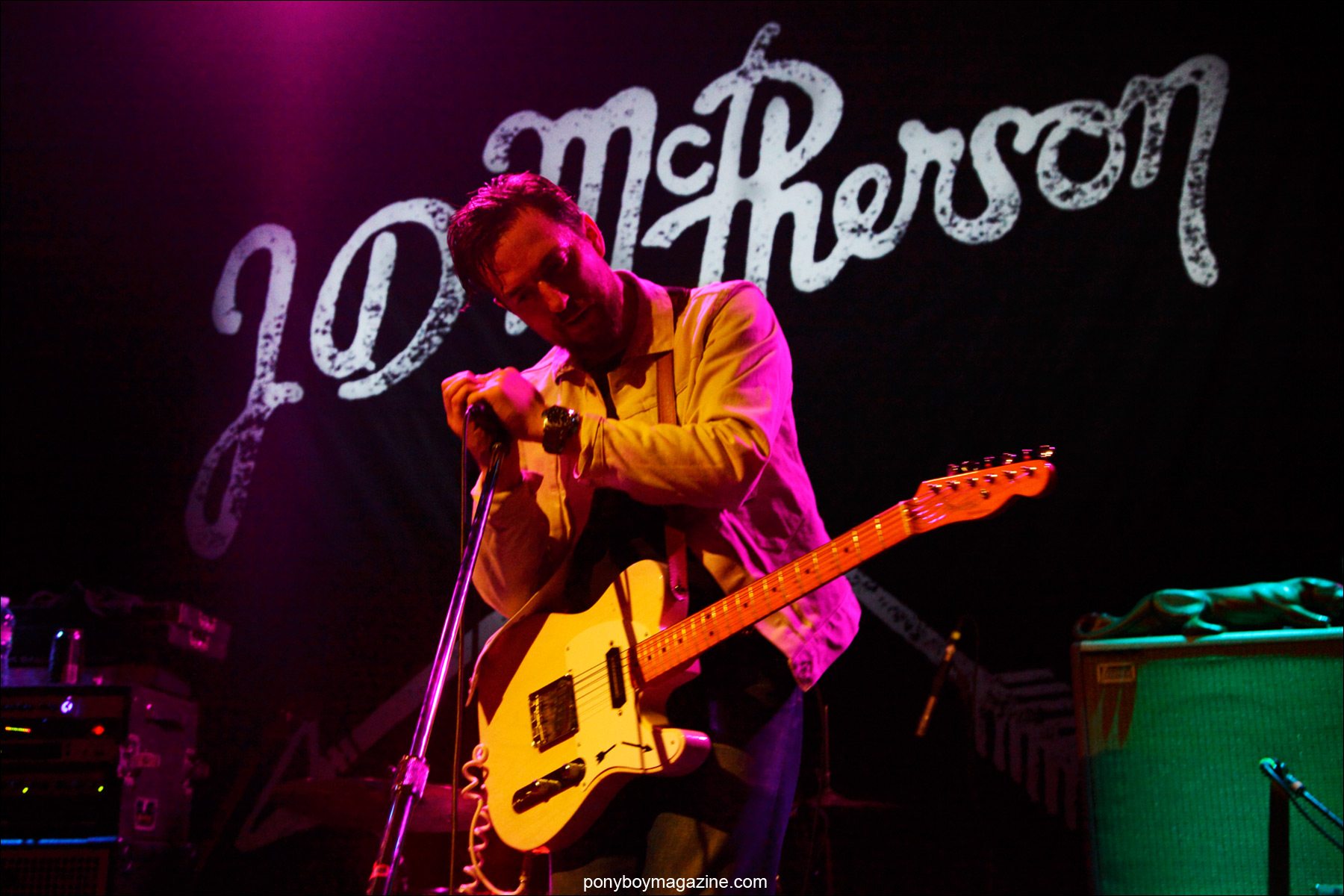 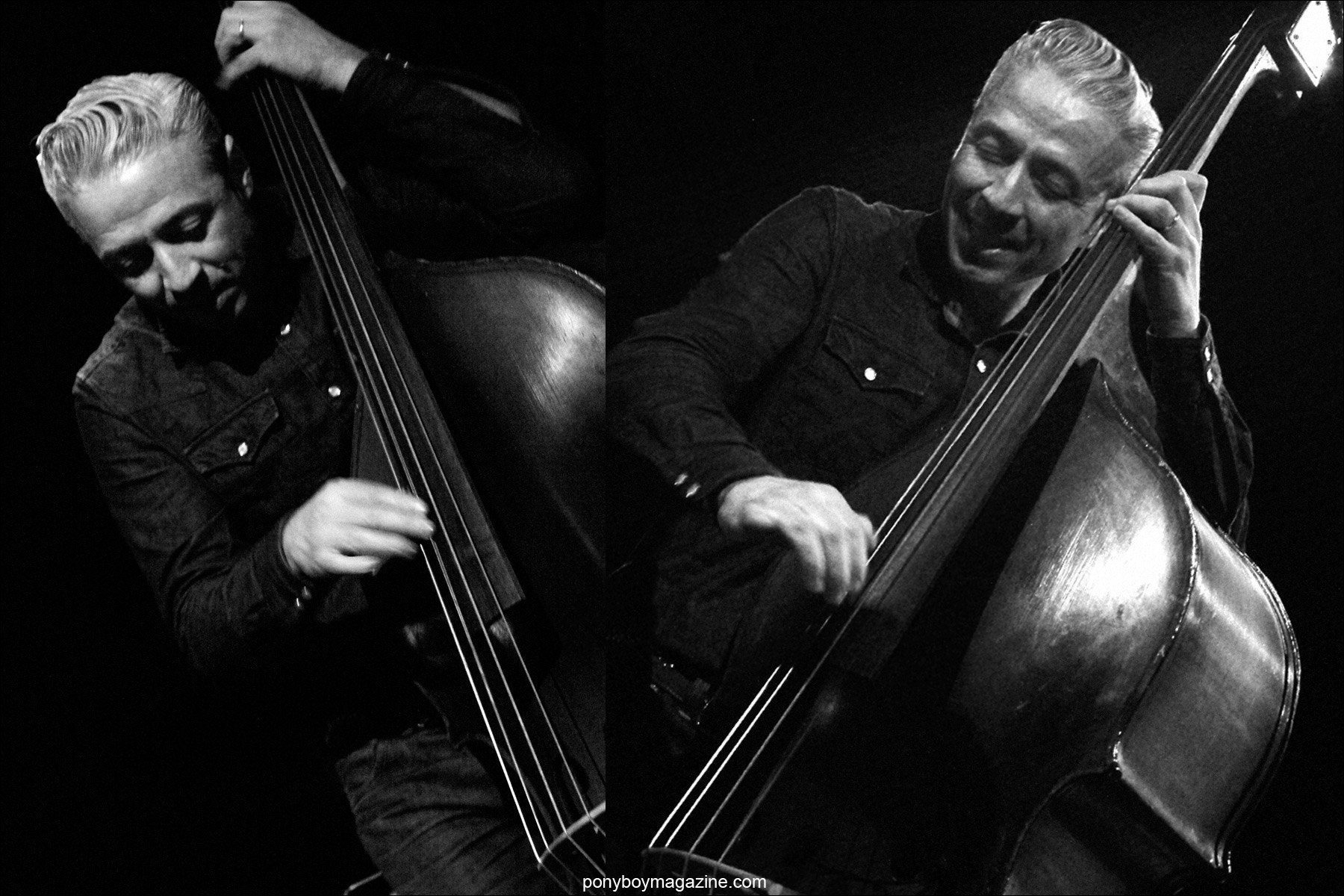 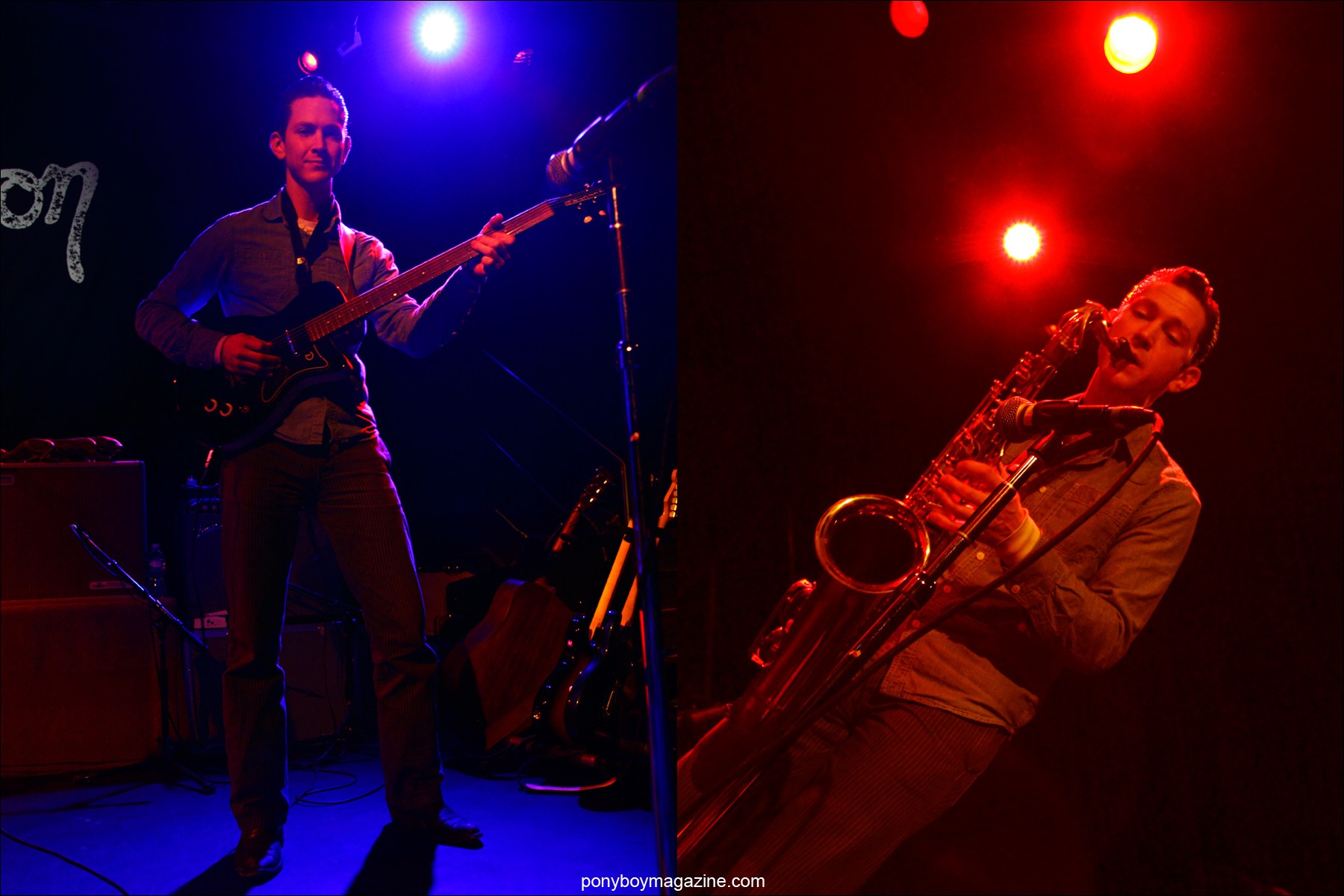 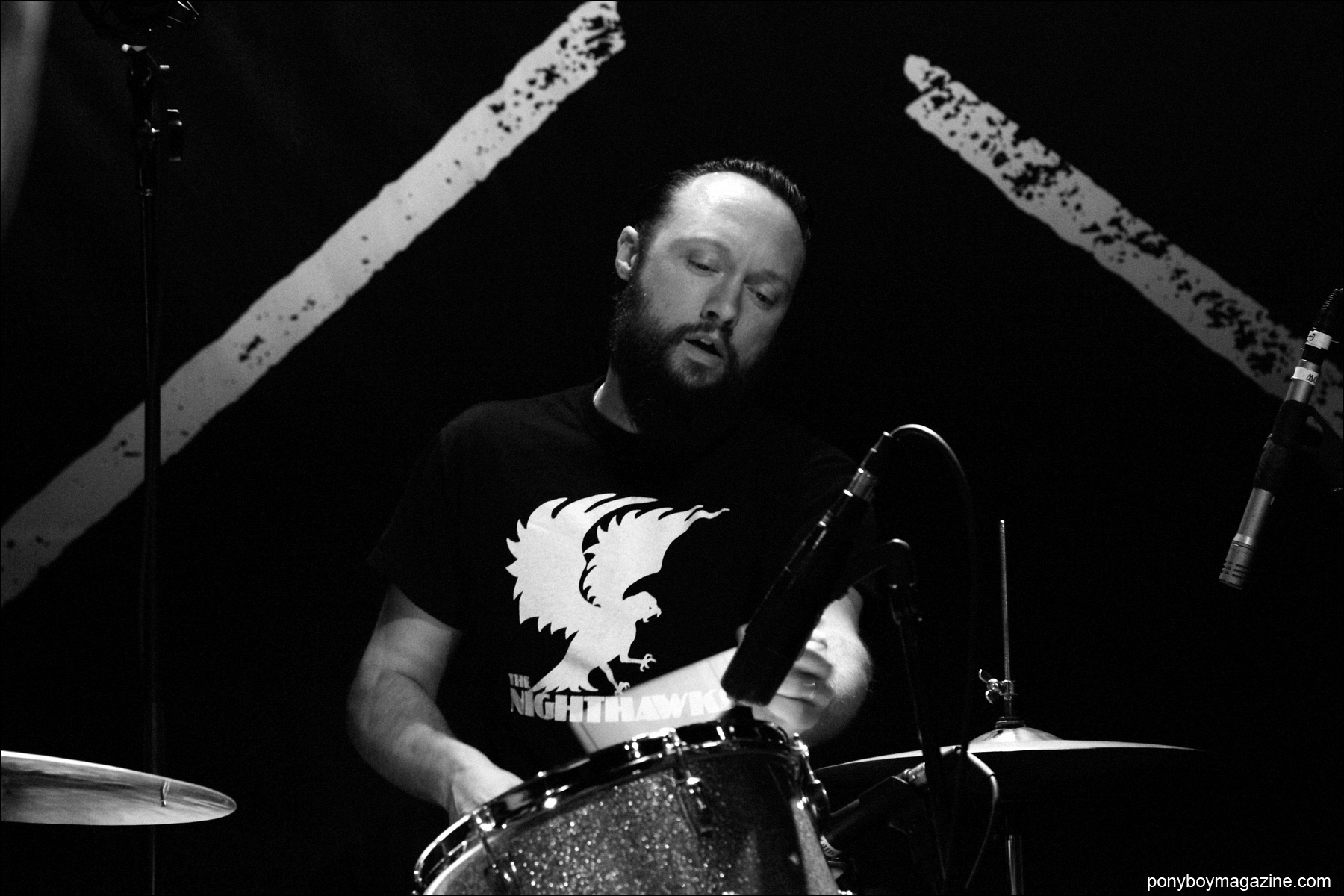 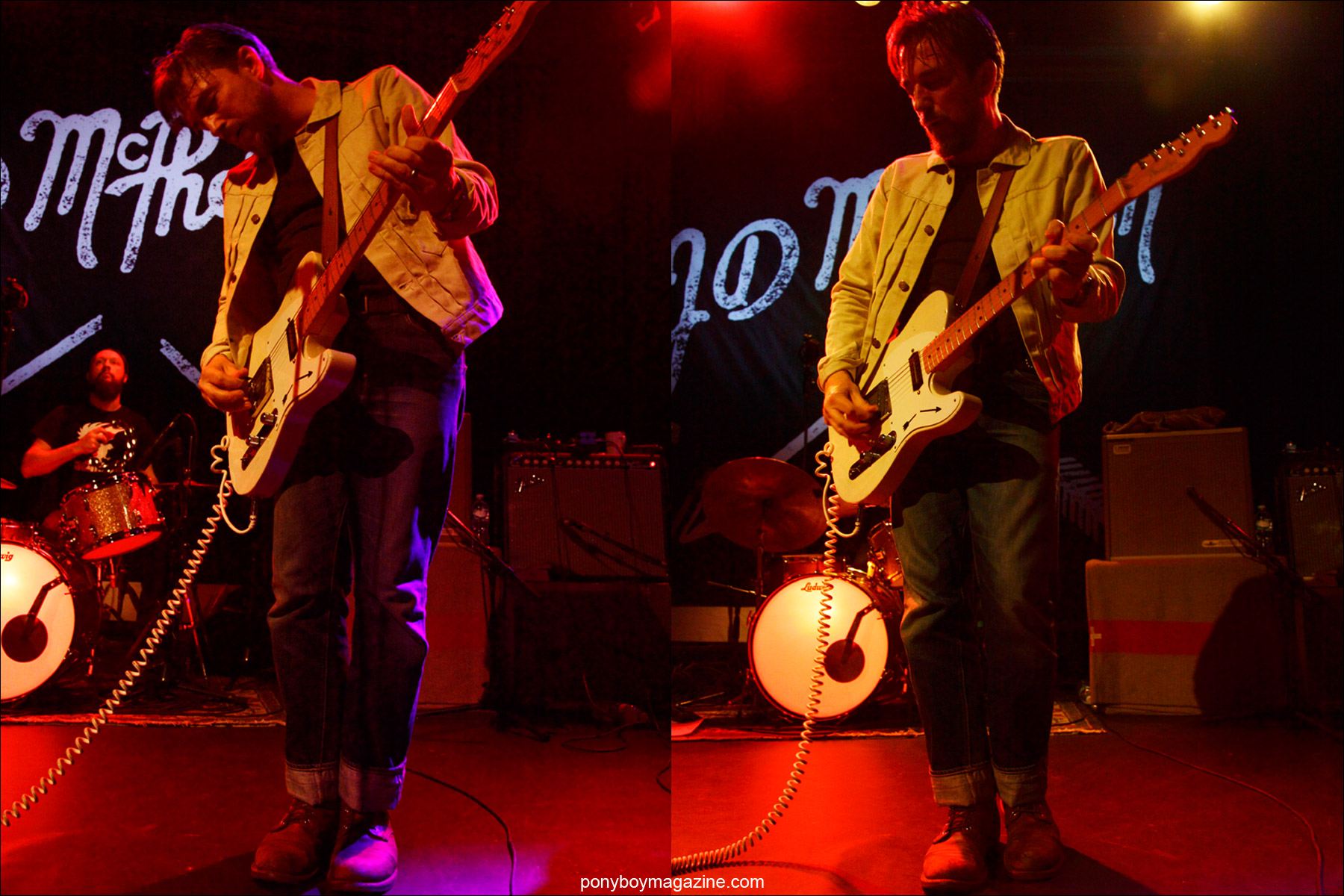 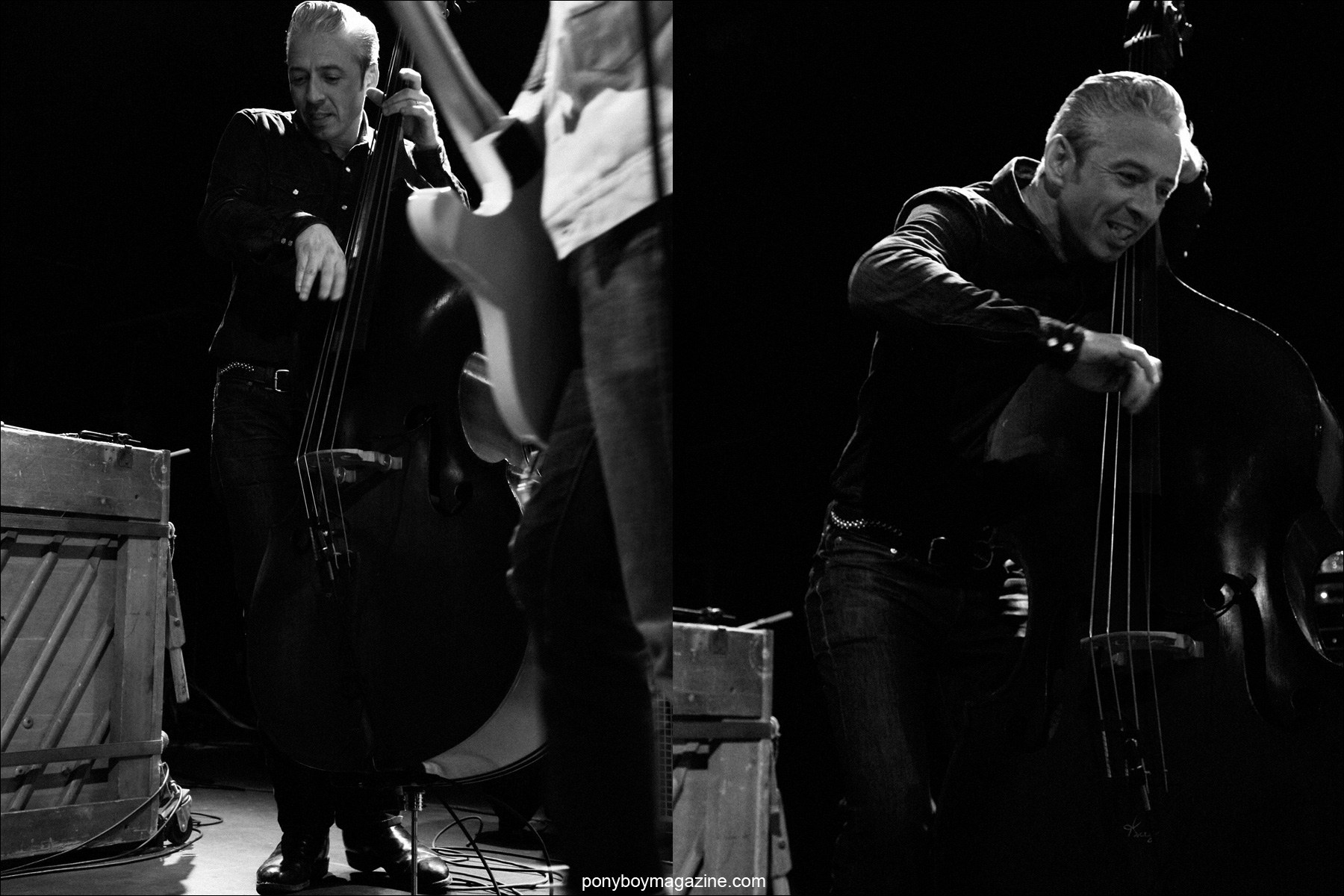 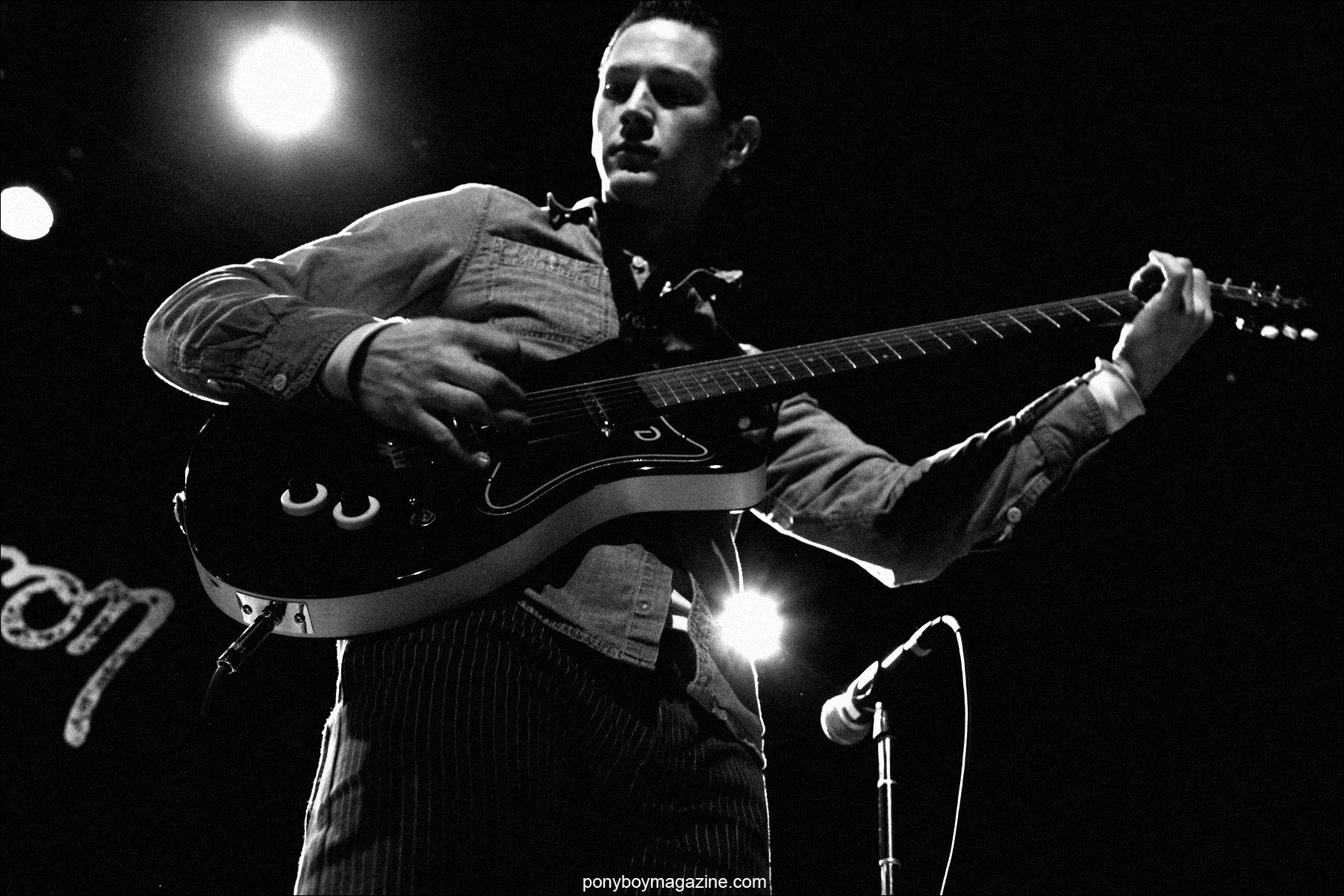 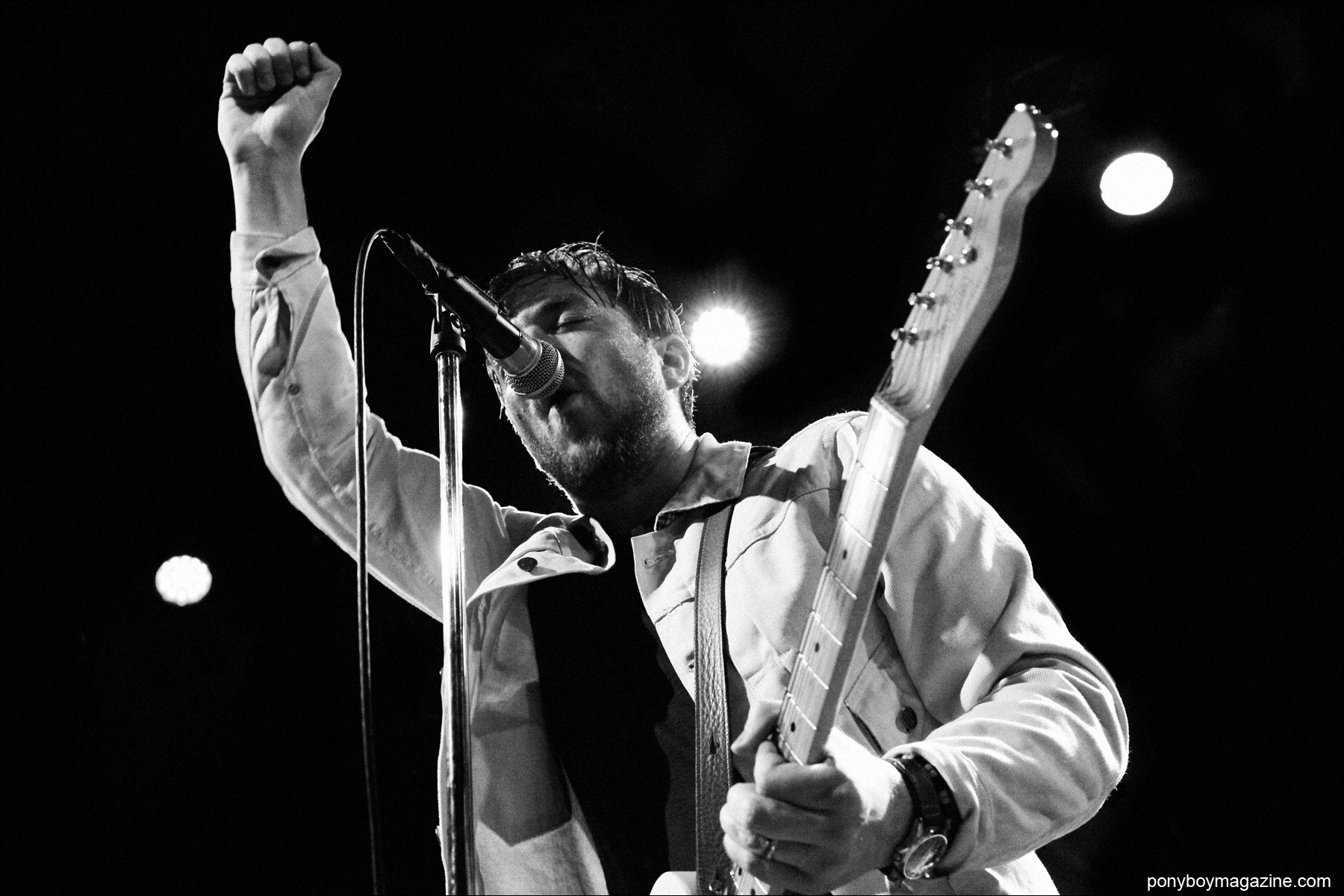 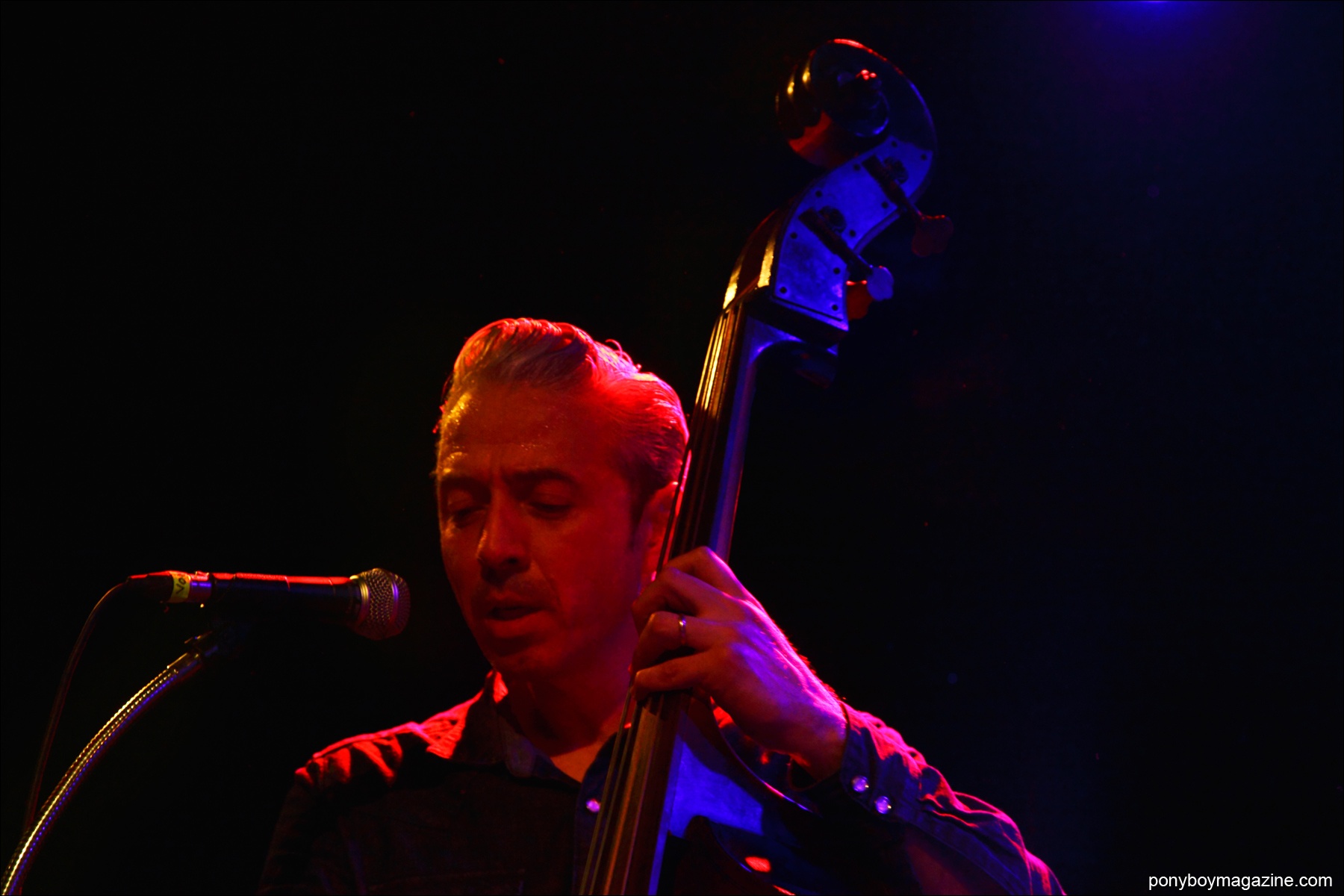 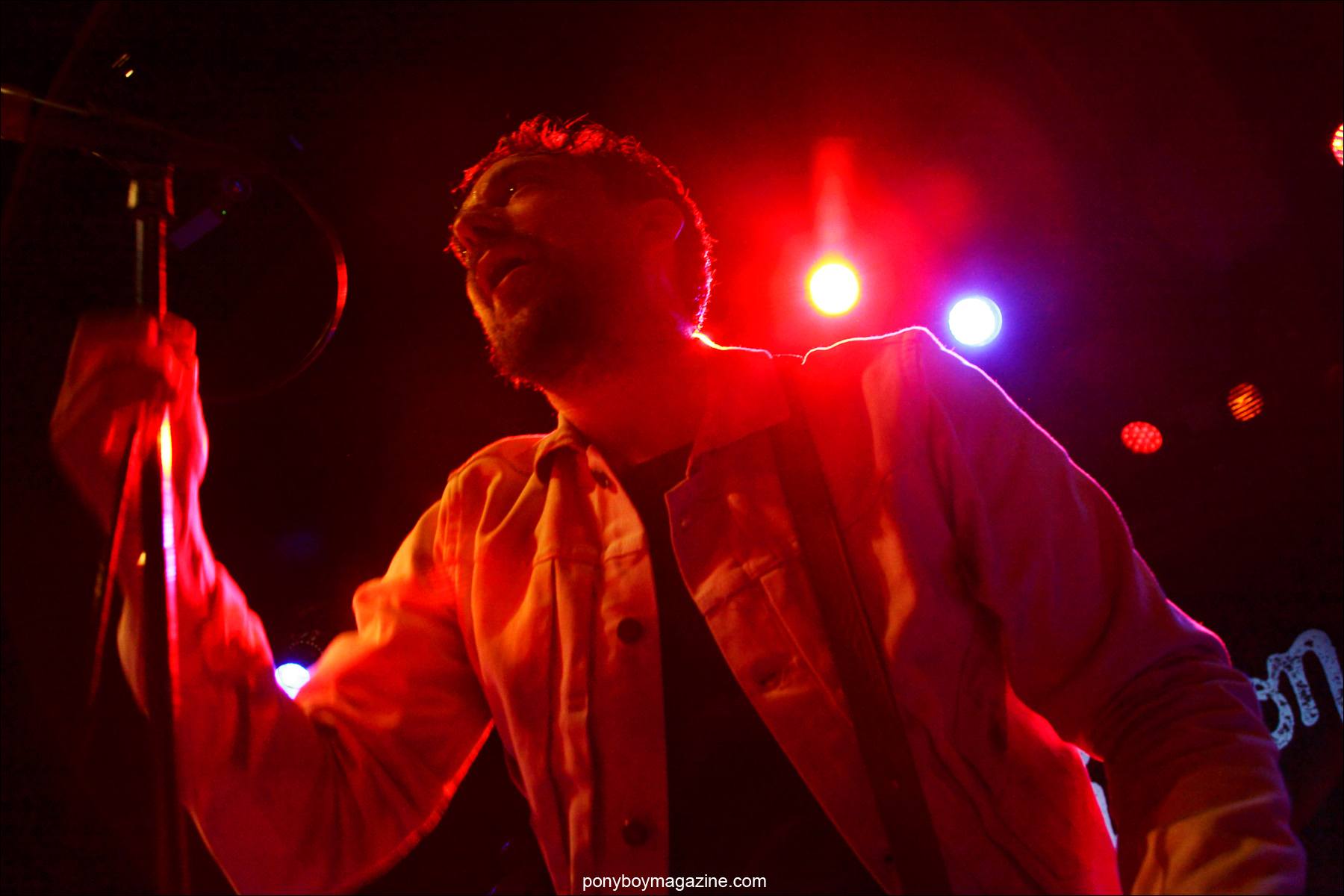 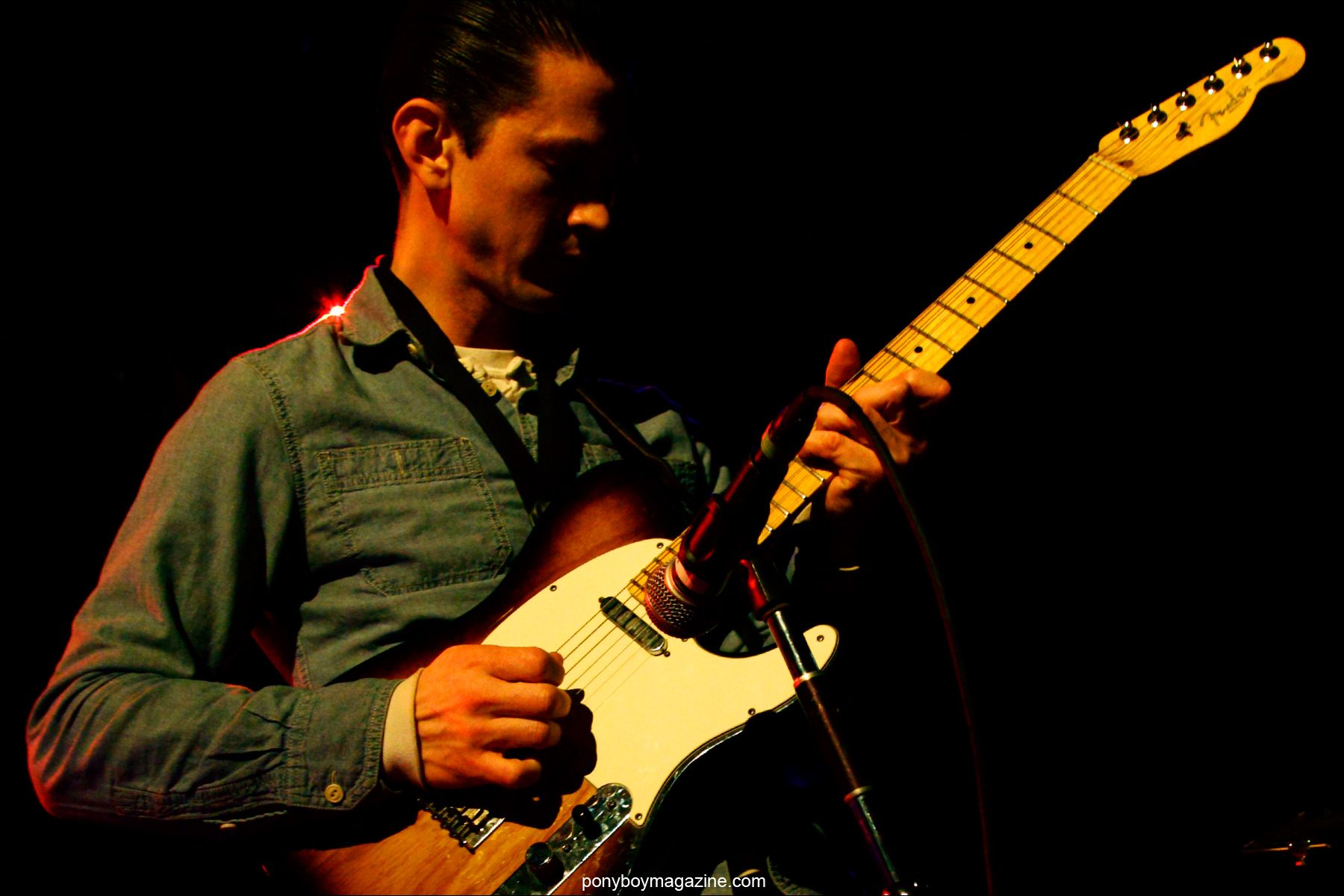 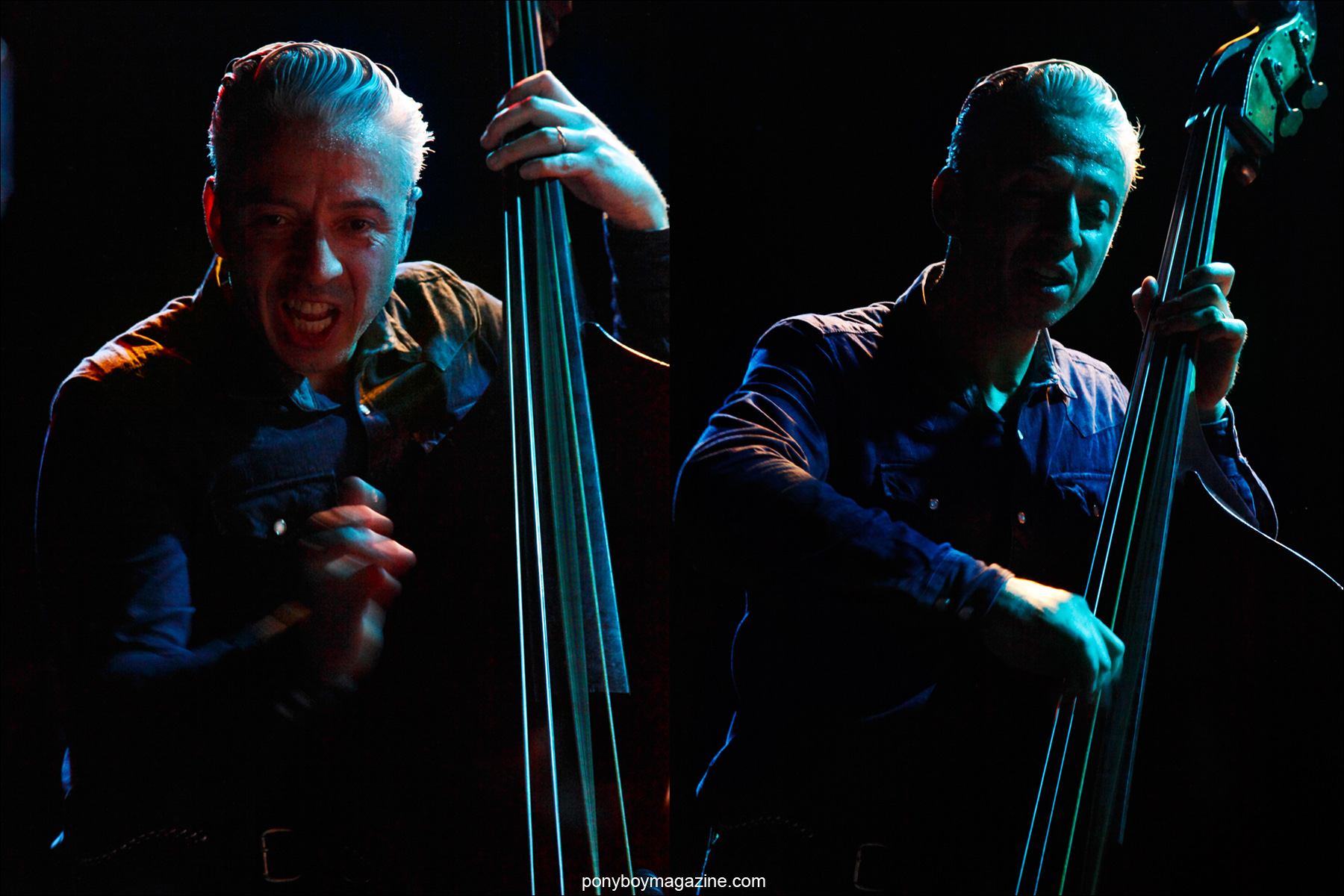 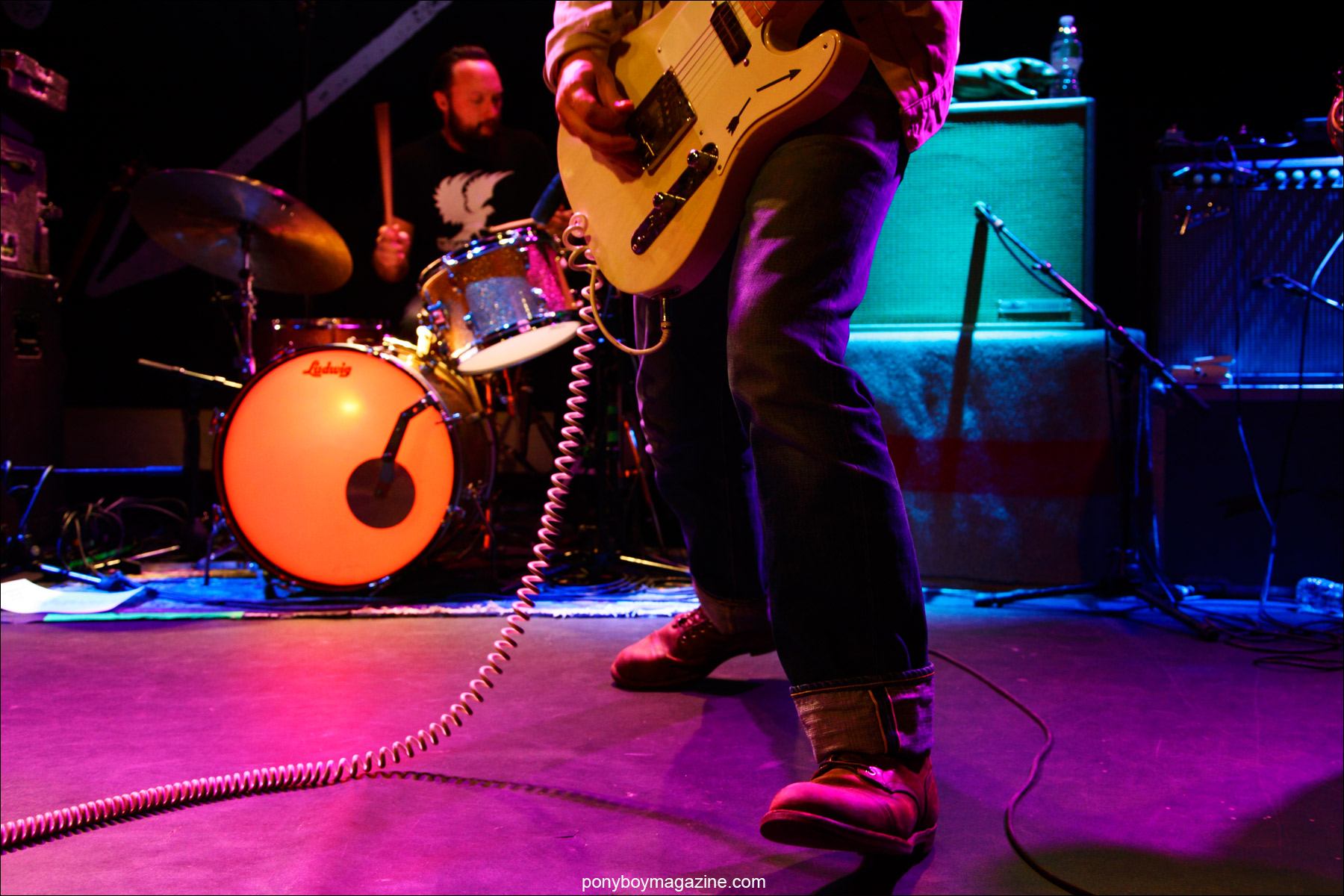 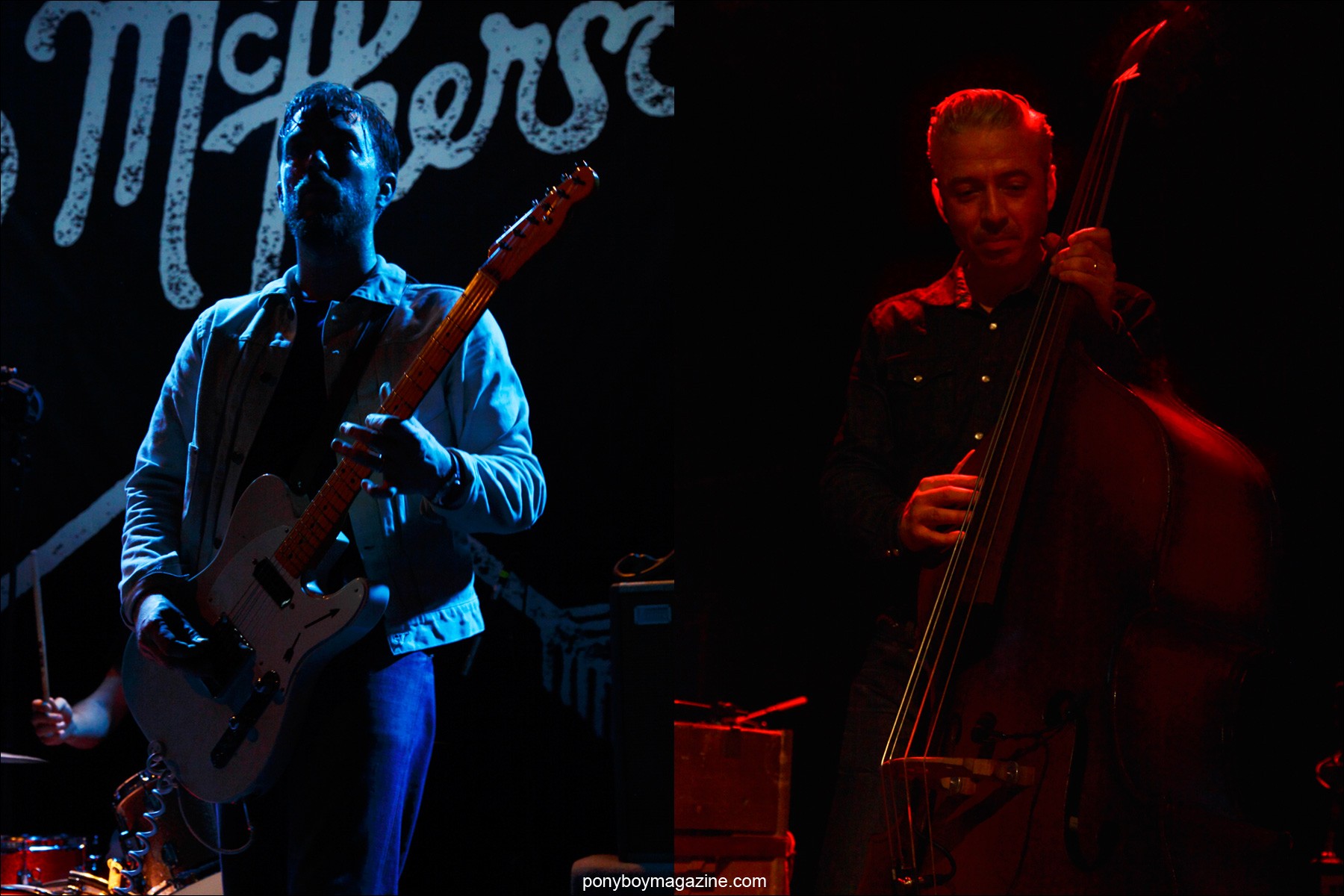 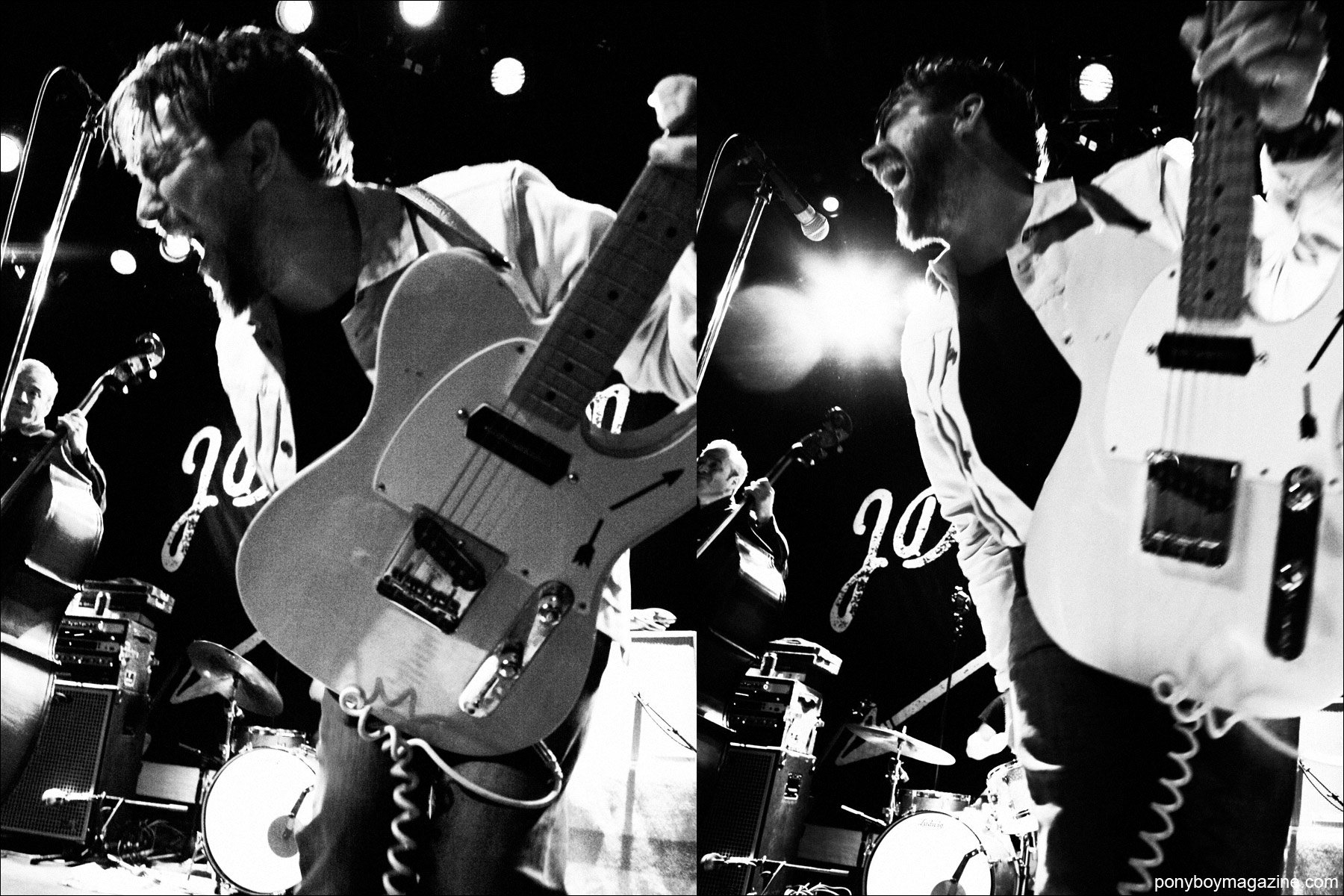 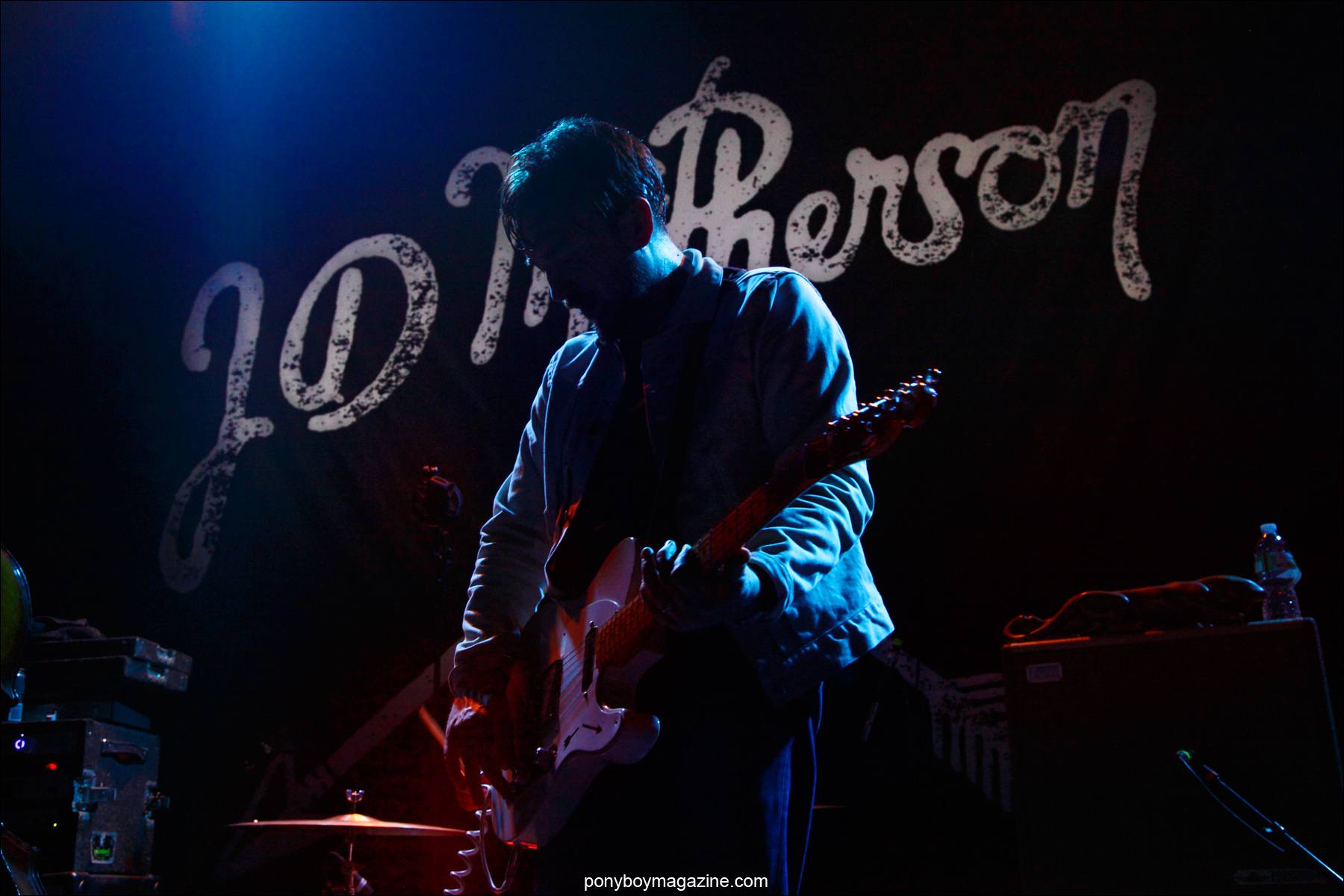 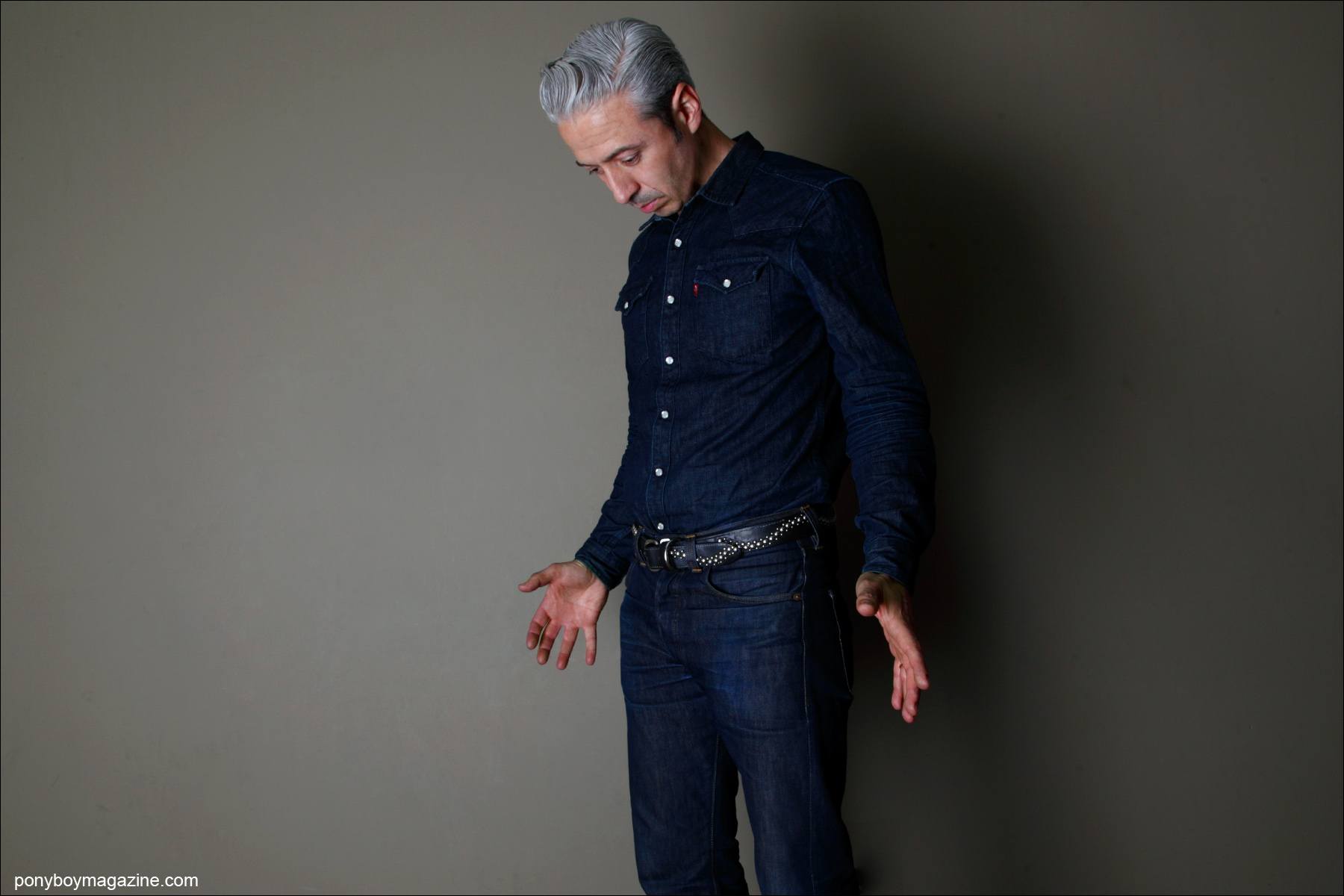 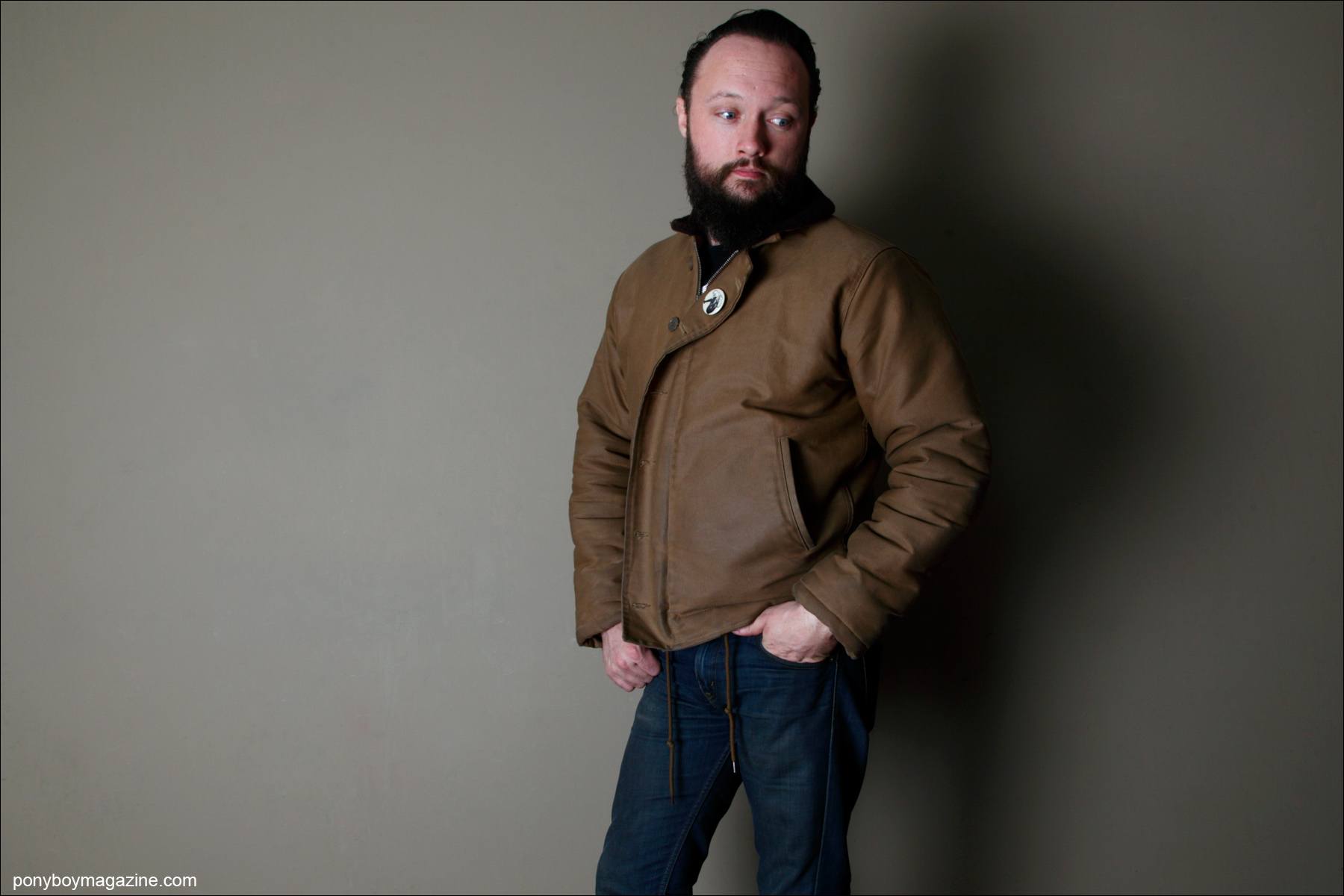 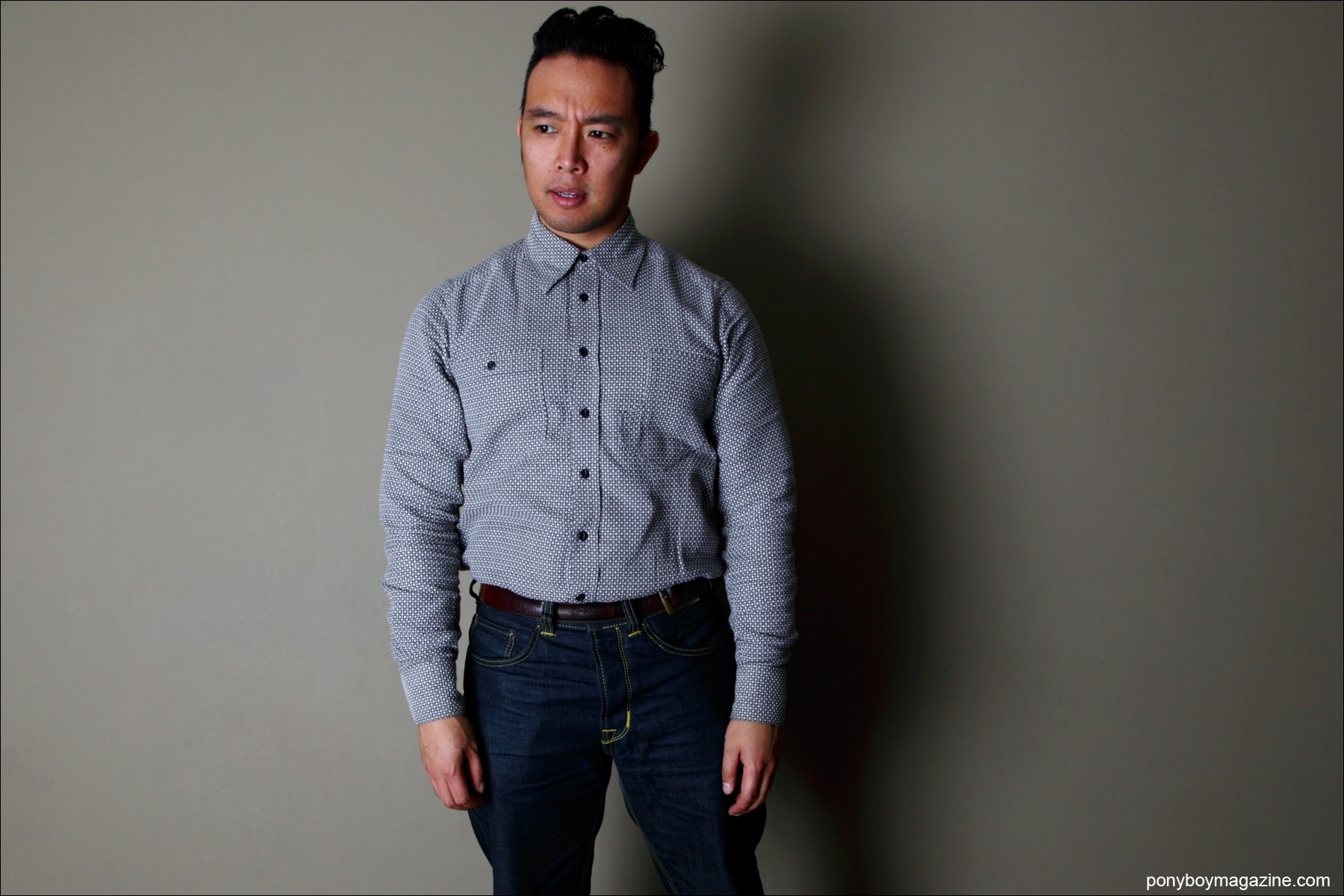 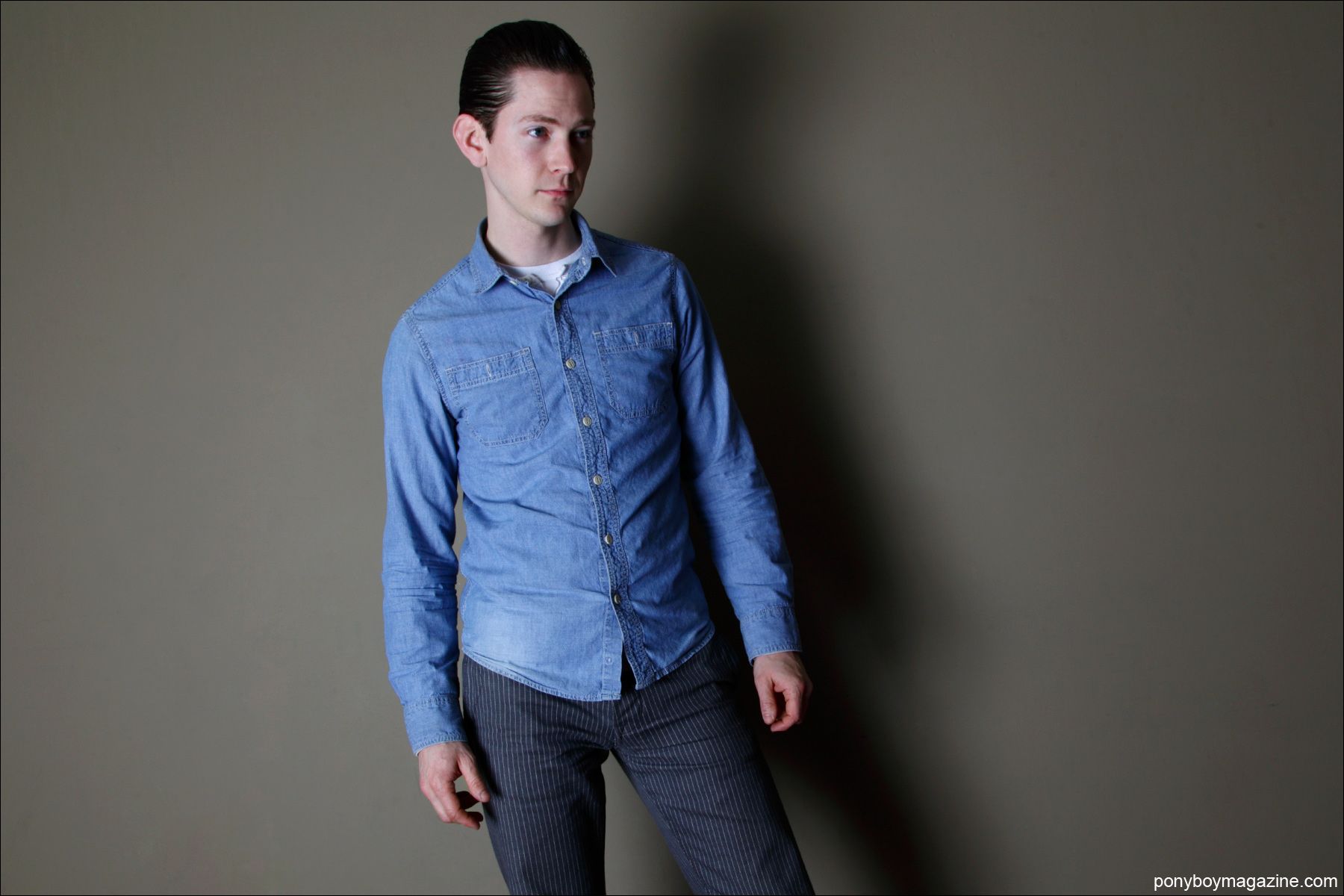 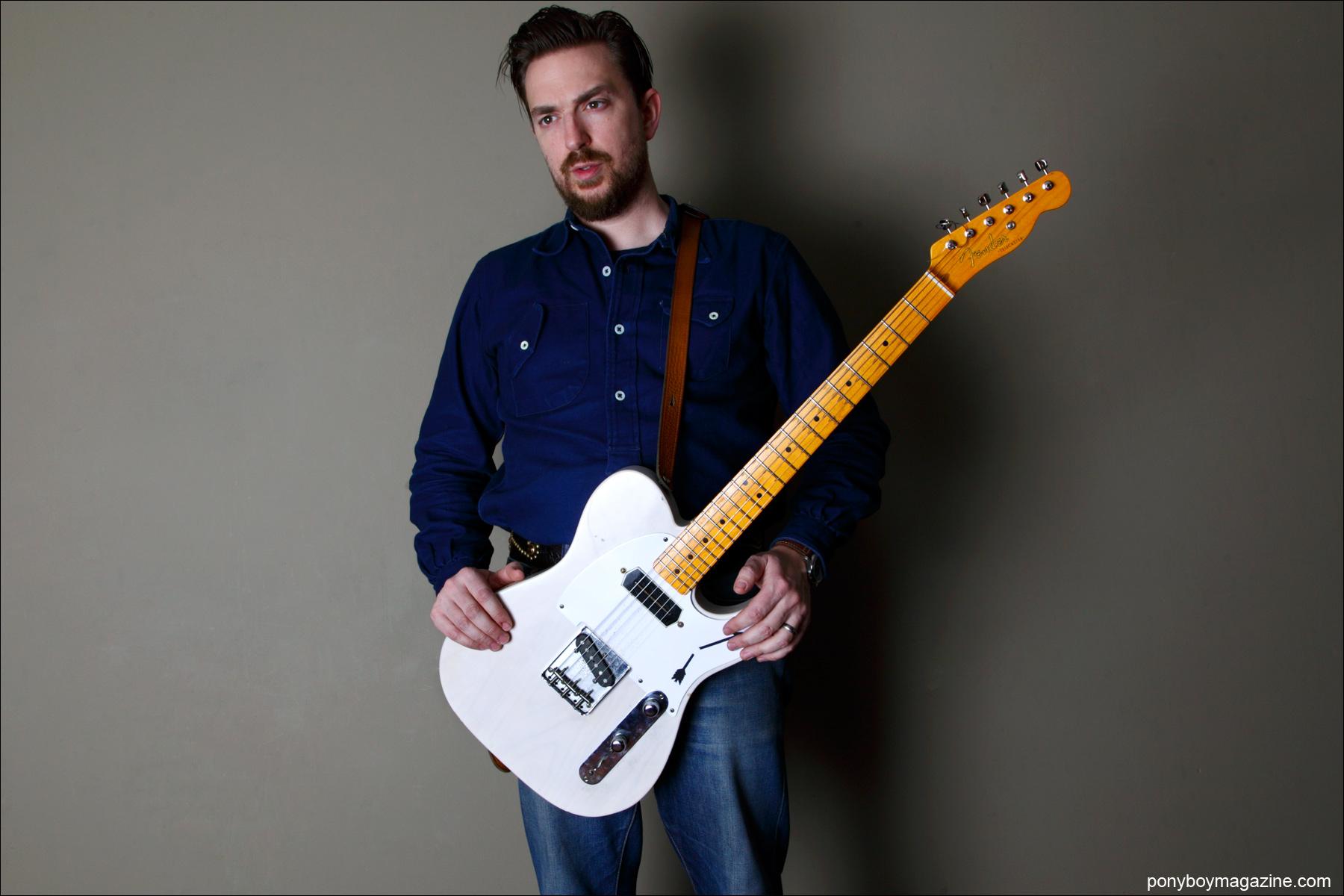 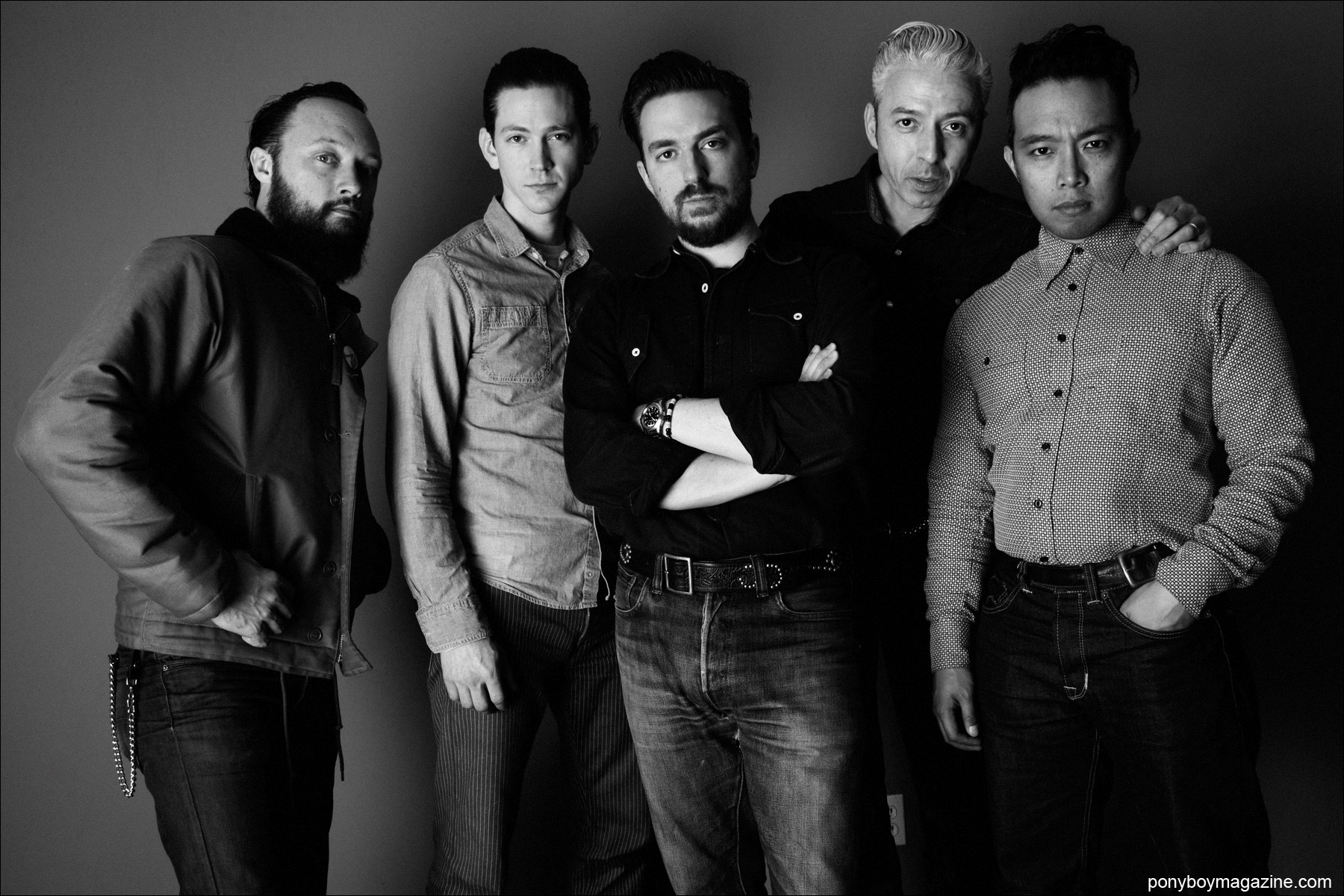 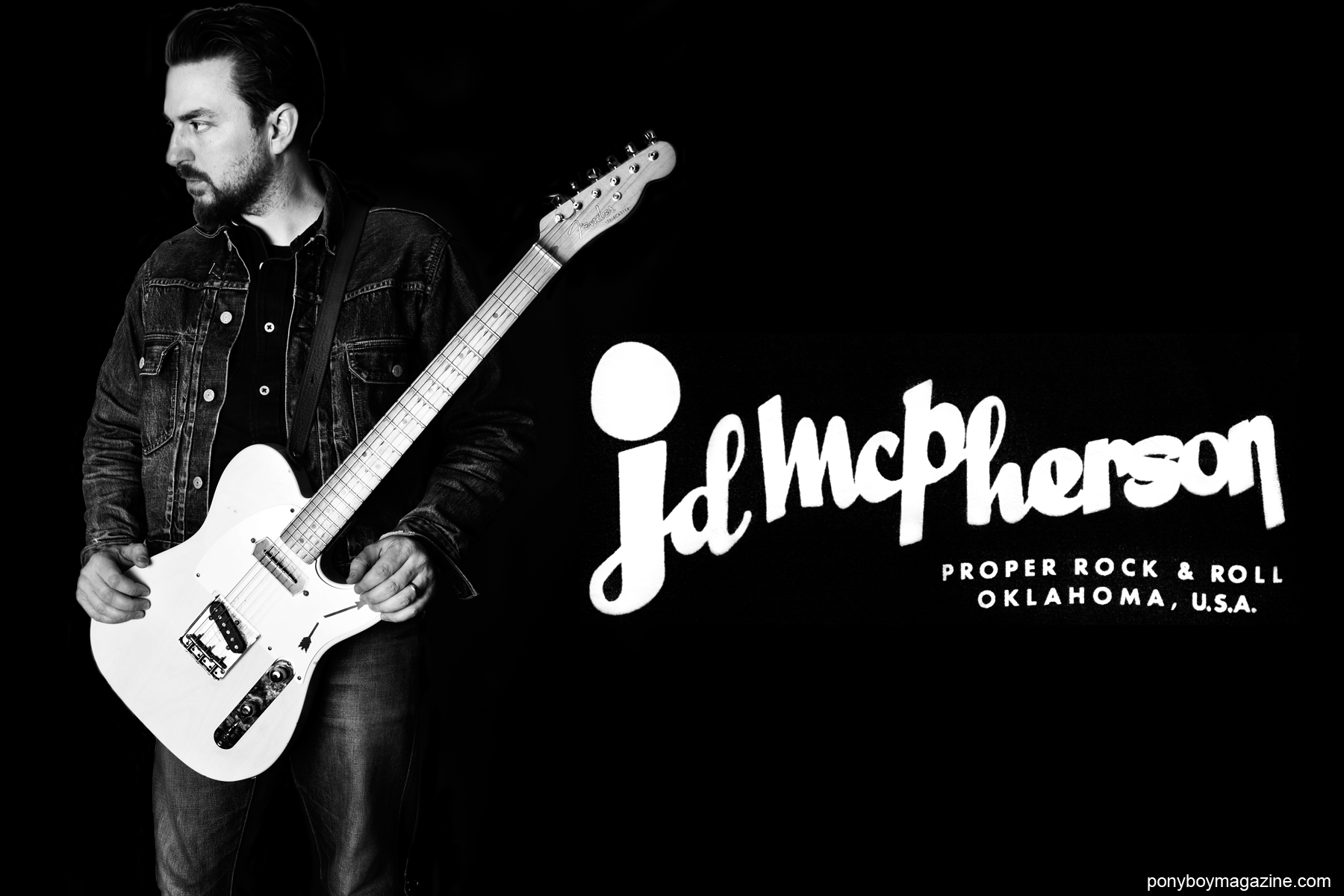 JD McPherson, the gifted Oklahoma born musician, is spreading his love of all things Americana by touring the U.S, promoting his most recent release, Let the Good Times Roll. We first stumbled upon this talent a few years back, and have been passionately attached to everything he does. So it was to our great surprise that we were granted permission to photograph McPherson, his legendary upright bassist Jimmy Sutton, as well as the other members of this terrific ensemble, Jason, Doug and Ray, before a sold-out show in New York City. An interview followed, as we were extremely interested in JD’s background, his thoughts on the making of the creation of this second release, and whatever else he would be willing to answer for our readers. Photography Alexander Thompson.

PONYBOY:  JD, what was your upbringing like in Oklahoma?

‏JD MCPHERSON:  I was raised on my parents’ cattle ranch in beautiful Southeast Oklahoma. People from there don’t say what community they’re from, they say “I’m from Southeast Oklahoma” or they might get more specific and say “I’m from Pushmataha County”. I grew up in an area between Buffalo Mountain and the Potato Hills, affectionately referred to as “The Tater Hills”, right next to Sardis lake.

We raised registered Brangus cattle, which is a breed comprised of Black Angus and a Brahman lineage. Growing up in this rural, isolated environment afforded me quite a bit of freedom to listen to music, play guitar, draw, read, and run around in the woods. That’s pretty much all I wanted to do.

PONYBOY:  When did you start getting into music?

JD MCPHERSON:  ‏At around age thirteen, I started getting interested in what my older brothers were listening to, which was primarily guitar-heavy classic rock, meaning bands like Cream, Led Zeppelin and Jimi Hendrix. This is what got me interested in guitar, and becoming an active listener to rock music in general. I discovered punk rock through rock magazines and what little information was available to me from visits to Tulsa and Fort Smith, Arkansas. There were no record stores where I grew up, so I would save my money and buy music when we visited the city. Punk rock opened up a whole world to me. I really ended up working hard, probably harder than I ever have since, on making and recording music and artwork. It was a very prolific time. I call punk rock a “gateway music”, so you’ll ultimately start getting into other things as well. I got into early rock ‘n’ roll in my late teens. It had all the energy and attitude that I found in the Ramones, but had a little more finesse and sophistication in the musicianship than punk did. I could also identify a little more strongly with the musicians, singers, and writers from the South than I could with four guys from Queens, or a band from the UK.

PONYBOY:   How did the band JD Mcpherson form?

JD MCPHERSON:  It took a while to get the lineup solid, but it began when we started playing shows after making our first record. Jimmy Sutton is the only member of my band who has been there since the beginning. We’ve played with a lot of musicians, but with the evolution into the current lineup of me, Jimmy, Jason, Ray, and Doug, we’re finally hitting on all cylinders.

PONYBOY:  Jimmy is an incredible musician. Tell us a bit about your affiliation/collaboration with the great Mr. Sutton.

JD MCPHERSON:  ‏Jimmy and I worked closely together on the first record.  He enticed me to record at his studio, with all the guys he knows in Chicago, and we all hit it off immediately, both personally and musically. Jimmy is, in my opinion, the coolest upright bassist on the planet. He cares about tone, gets a great sound, and he’s got a really tasteful technique. I never worry about what he’s going to play. He’s an incredible performer, as well, and an asset to the live show. One thing I like about Jimmy’s performing is that he avoids the typical upright bassist’s bag of stage tricks – the “spinning move”, the “two handed slap” etc. He just focuses on playing well. That’s what you want in a bassist.

PONYBOY:  You’ve recorded both your records at Hi-Style’s analog recording studio in Chicago. What is the recording process like?

JD MCPHERSON:  ‏Just to be clear, the first record was recorded at Hi-Style. But the new album was recorded in Valdosta, Georgia, at Soil of the South studio, with Mark Neill and I co-producing. Some supplemental recording and overdubs were done at Hi-Style, as well as at a couple other studios in Tulsa.

The process can be very simple, or very complicated, depending on the song. The song might practically record itself, or it may take work to bring the song into the finish line. The main idea is to always have at least the rhythm section and a guitar record together in the same room, so it has a “spark”. I enjoy using time-tested, classic equipment because of the qualities that these pieces bring to recorded music. I also enjoy the vibe of them just sitting around. However, it’s important to be pragmatic, and to take advantage of every option available. The digital realm has really moved to a cool place in the last few years.

PONYBOY:  Your debut album Signs & Signifiers was released in 2010 to rave reviews. How was your vision different for this follow-up record, Let the Good Times Roll?

JD MCPHERSON:  ‏I took a lot more chances in the writing on this new record. The songs are much more personal, and the music and sound is a bit more experimental. I was so nervous about the personal nature of the new material, that I didn’t play the demos to anyone, not even the producer, until we got to the studio! It took a lot of trust on the part of all parties, but I’m very happy with the result. I do think that the “drop and go” nature of the recording added a kind of raw energy to the songs. The new material wasn’t working with our old process. It became more and more apparent that they needed a different treatment – bigger, more billowy hifi sounds. I was listening to a ton of Link Wray and Irma Thomas. I think the new record is a bit of a mixture of their records.

PONYBOY:  Your first leg of this tour has had sold out shows everywhere. What is touring like for you on a personal level?

JD MCPHERSON:  I love the ebb and flow of record, perform, record, perform. Playing gigs is where you make a connection with people, and it’s incredible. I’m a pretty shy person, but somehow the stage feels like a very comfortable place for me to be. I love hearing folks sing along with the songs, it’s the most rewarding part of the whole thing.

PONYBOY:  What bands/musicians would you consider to be your musical influences?

JD MCPHERSON:  ‏My favorite artists are Little Richard, The Clash, The Ramones, Bo Diddley, Irma Thomas, Ken Boothe, Bad Brains, Levon Helm, Big Sandy & the Fly Rite Boys, The Smiths, Astrud Gilberto, Mickey Baker, Fats Waller, and Link Wray. There are so many, and the list changes all of the time. I’m also a big Madonna fan, and I’ve been listening to a ton of Teenage Fanclub.

PONYBOY:  The band has a big following with the rockabilly crowd, and you’ve been dubbed a revivalist .What are your thoughts on this?

JD MCPHERSON:  ‏‏We love all those folks, as we are a like-minded collective. And as far as being a revivalist, I don’t know how that can be avoided, or why it would be a negative. I just love rock ‘n’ roll so much. I remember as a kid reading an article with Nirvana (one of my favorite bands ever), and Kurt Cobain mentioned that he felt it was his responsibility to introduce bands like Black Flag and Flipper to the mainstream. I definitely feel that if I caused a couple of kids to check out Bo Diddley and The Johnny Burnette Trio, I’ve done good work.

PONYBOY:  How would you describe your personal dress style?

JD MCPHERSON:  ‏‏‏I like classic style, style that will never disappear. Vintage American style is always going to be a constant. I tend to be much more comfortable in clothes that aren’t flashy, but rather rugged and utilitarian. I always thought Desi Arnaz was the coolest looking cat, with his two-tone gabardine suits. However I could never pull that look off – believe me, I tried! I find the style of working class artists like Jackson Pollock and the Beat writers to be much more accessible. I love the photos of Pollock in his Levis and work boots creating his paintings, and the photos of Jack Kerouac in a beat up pair of high-waisted chinos and a PT sweater. You can’t beat a pair of five pocket jeans, and some clunky boots. I have a few good, quality pieces, and I wear them out.

PONYBOY:  What is family life like for you, with touring so extensively?

JD MCPHERSON:  ‏‏‏‏We’re getting used to touring, but it’s really tough. It’s the only downside to being a musician. I am so in love with my family. I have to say that if it weren’t for video calls like Skype or FaceTime, I wouldn’t be able to do it. The first year we were out was incredibly difficult on all of us. However, the shows are growing in quality and occurring with less frequency, so I’m finding a better balance.