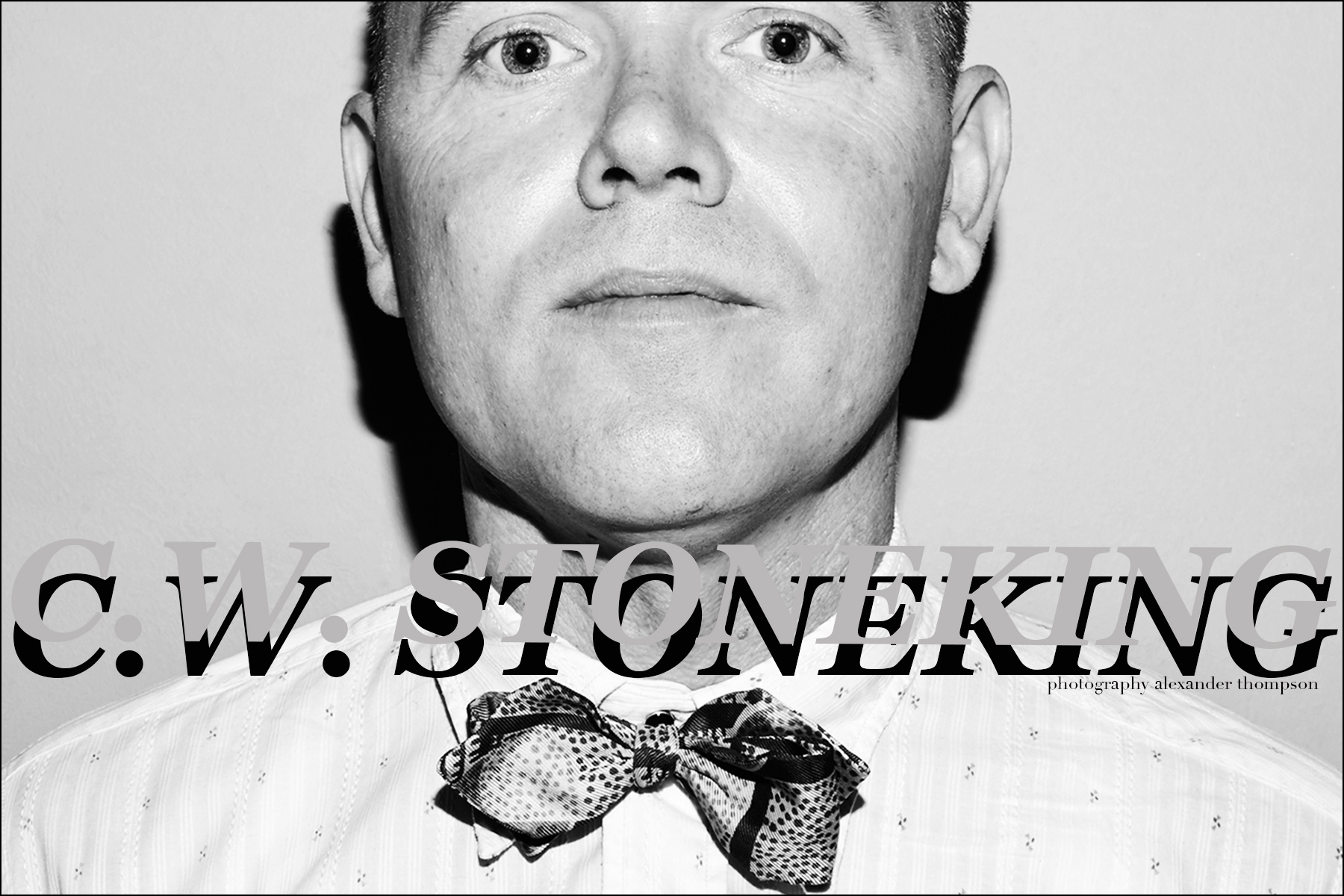 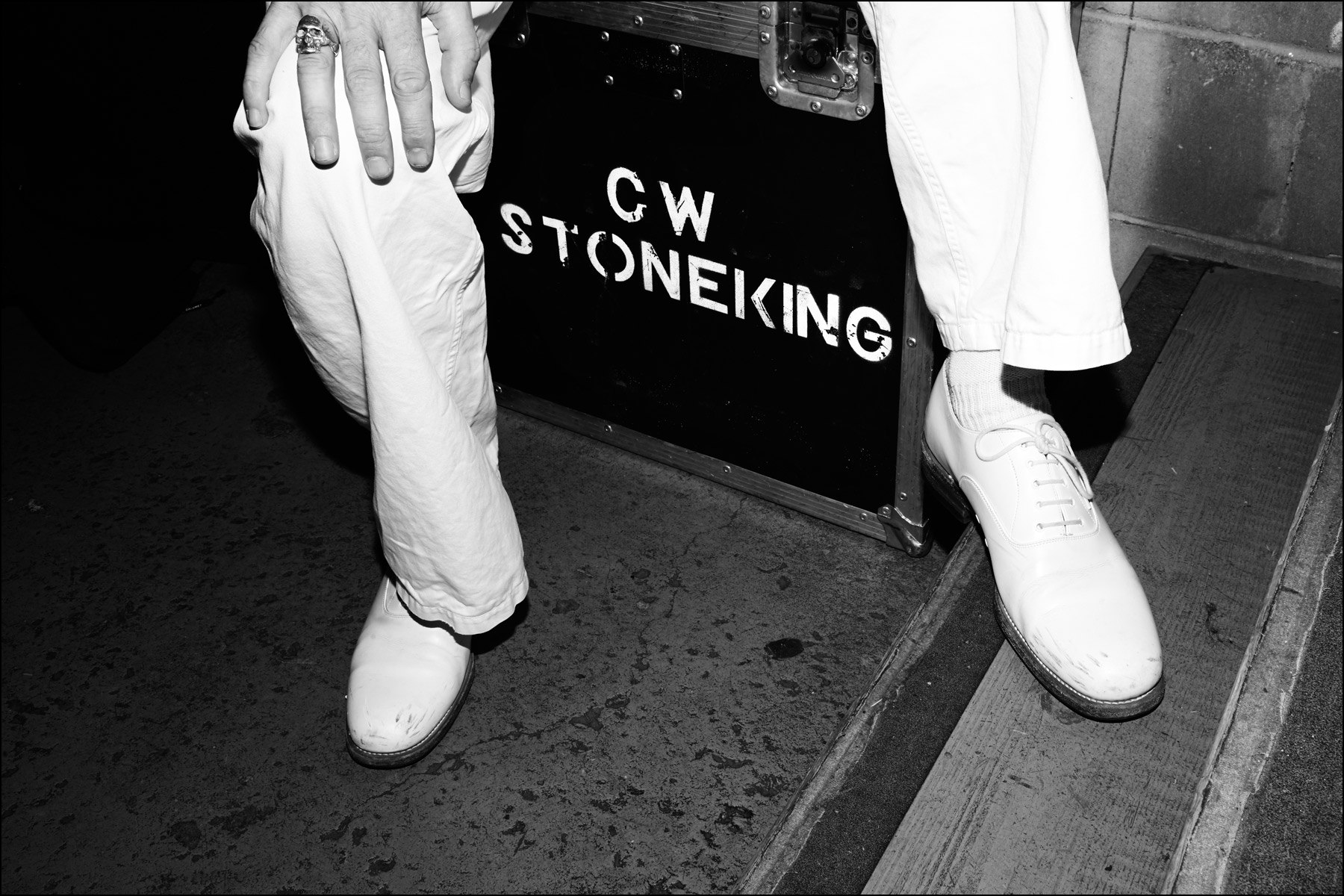 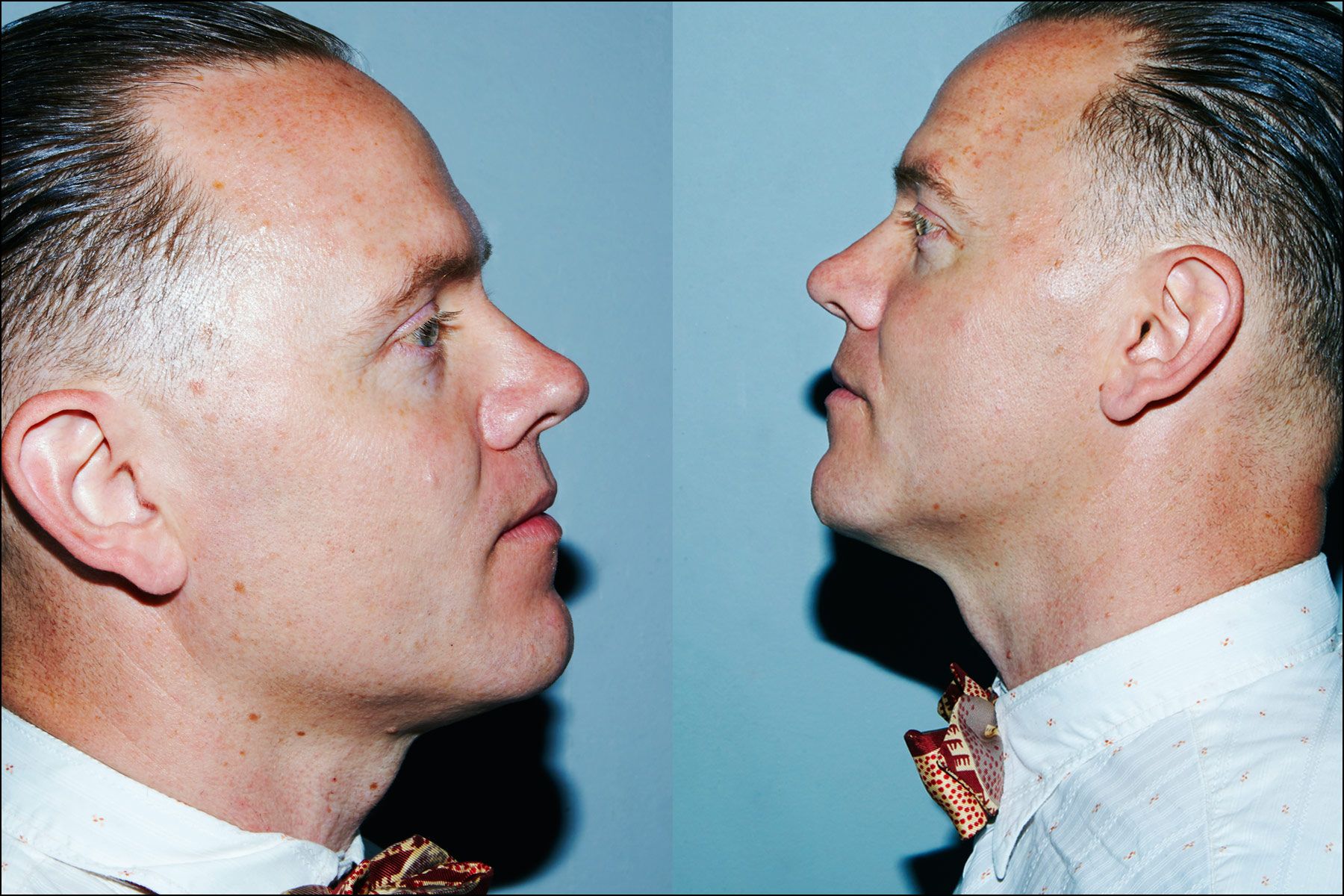 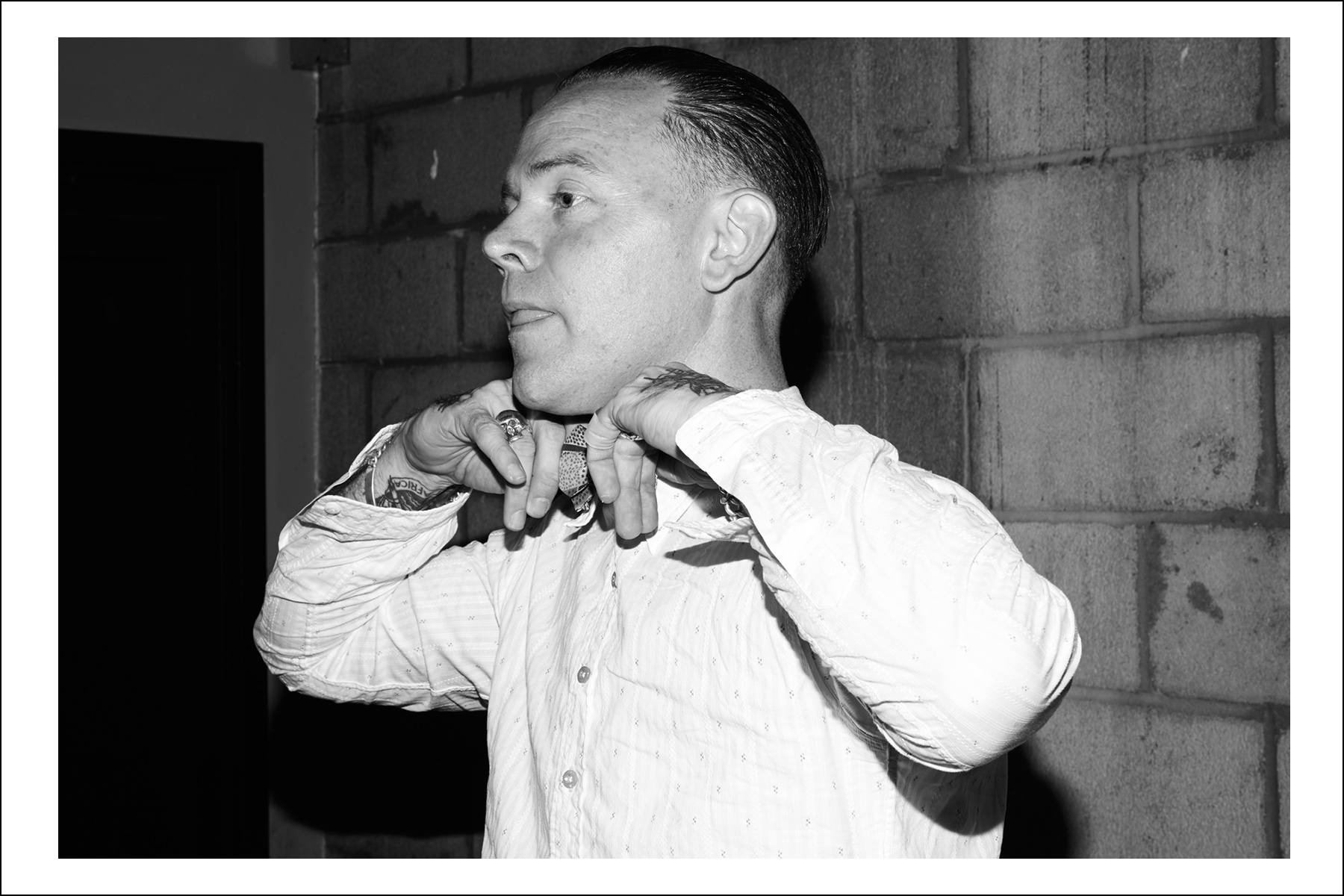 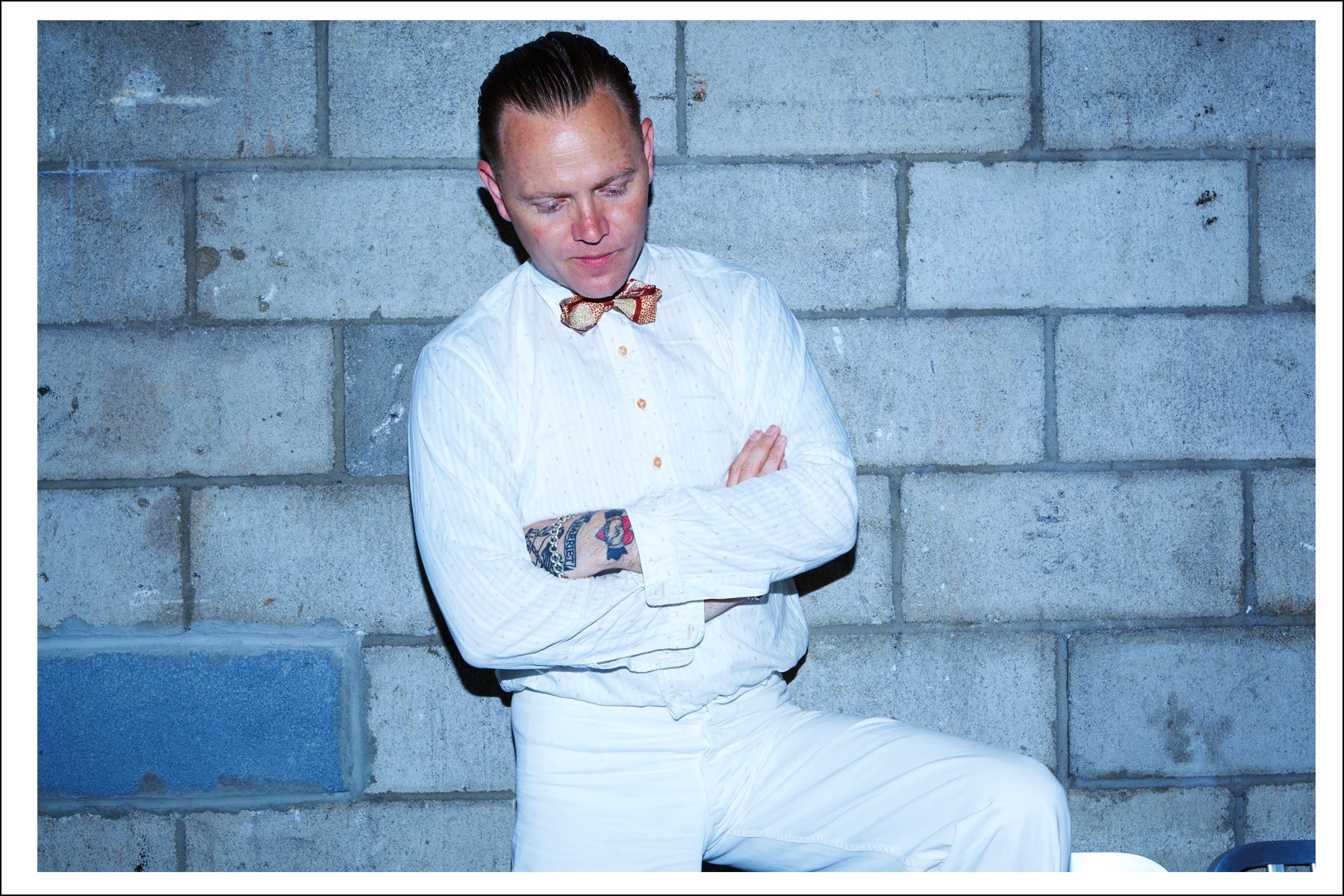 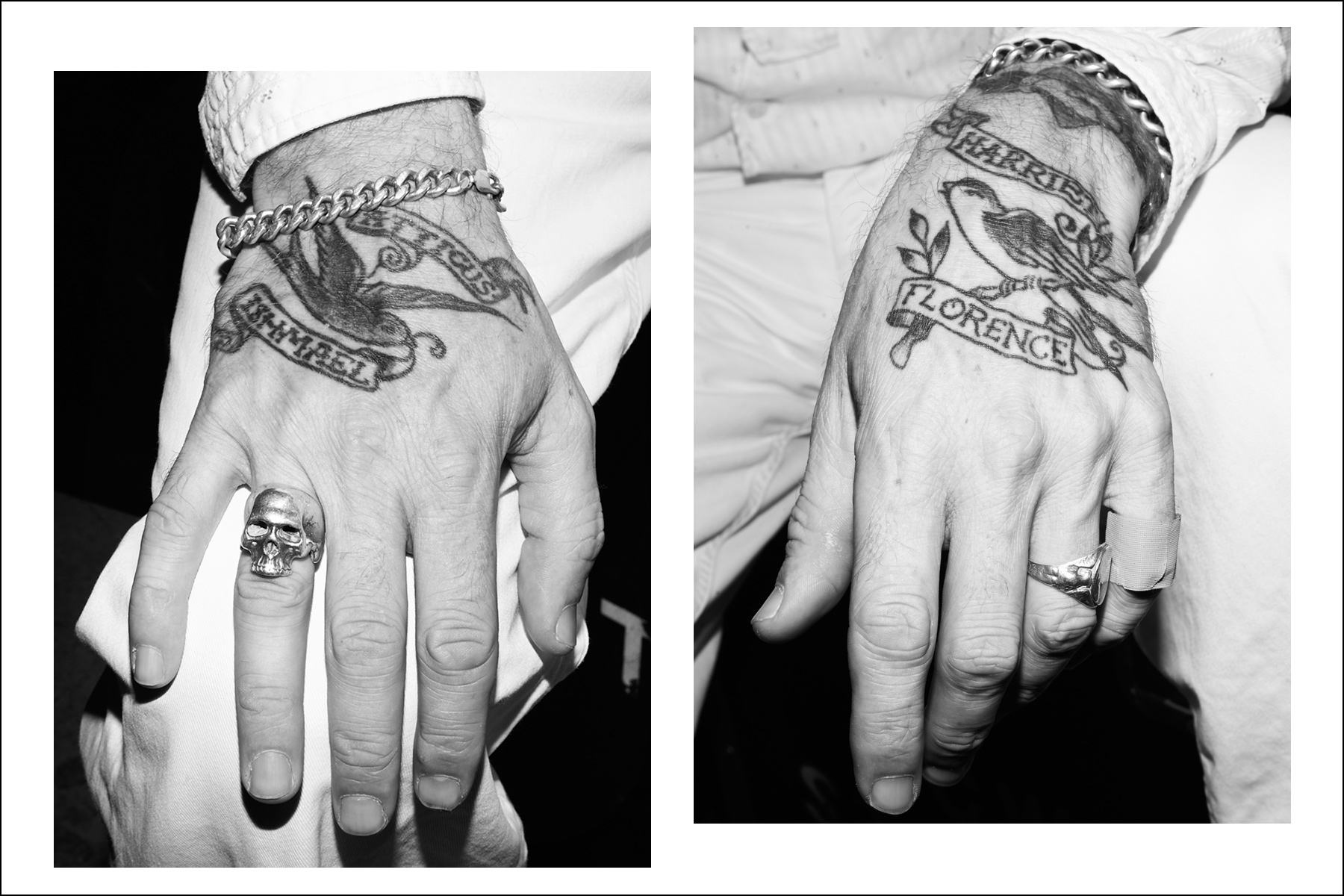 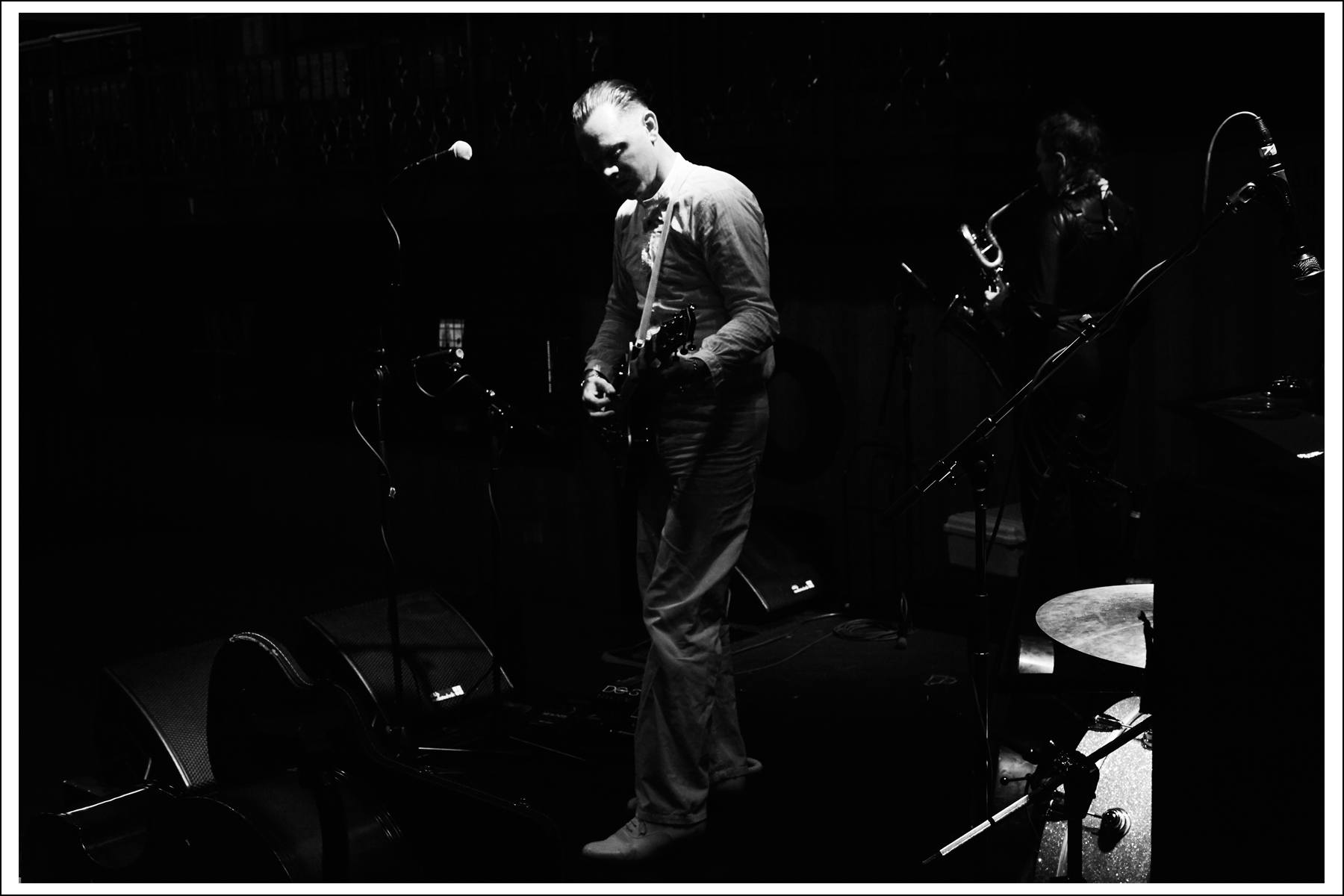 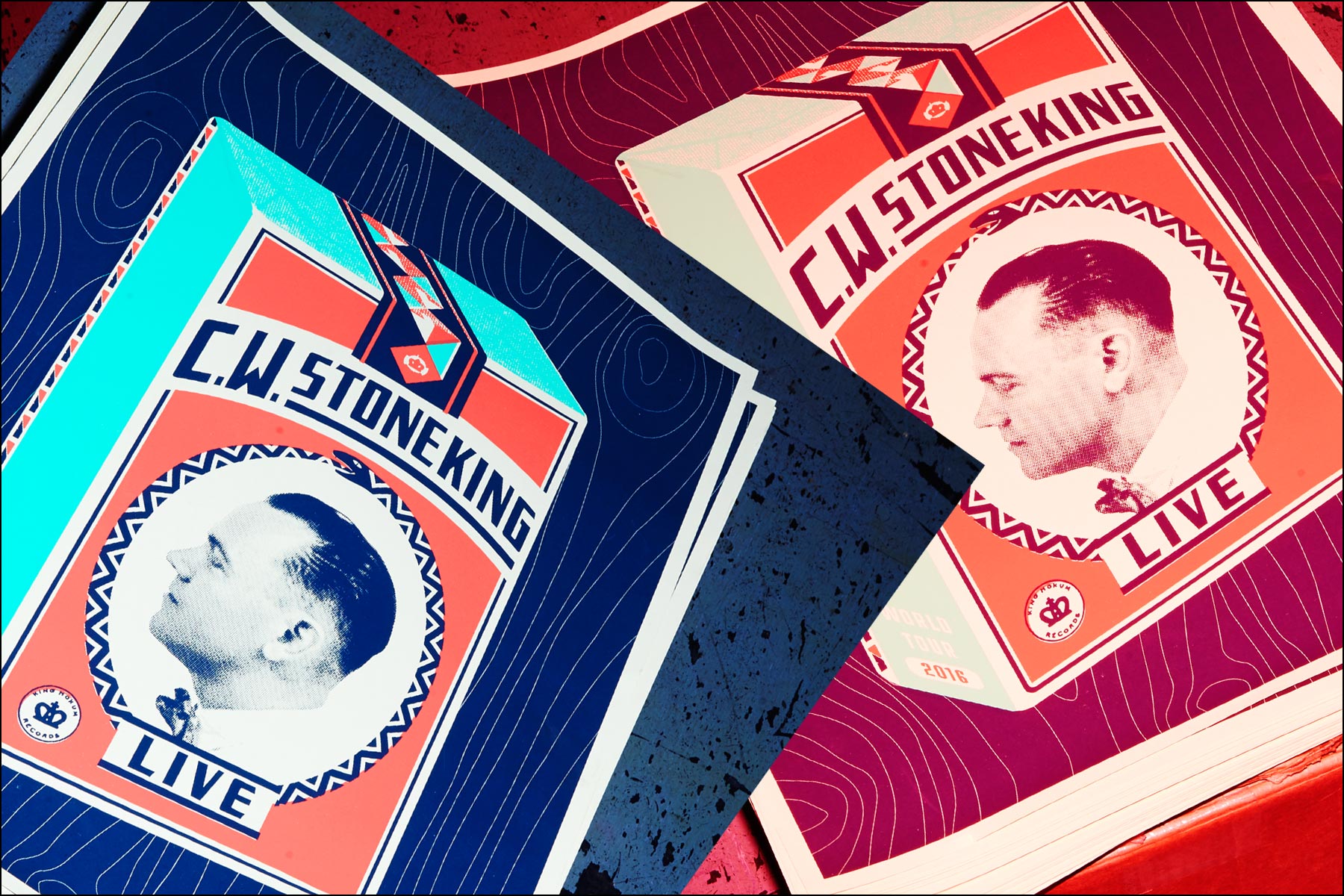 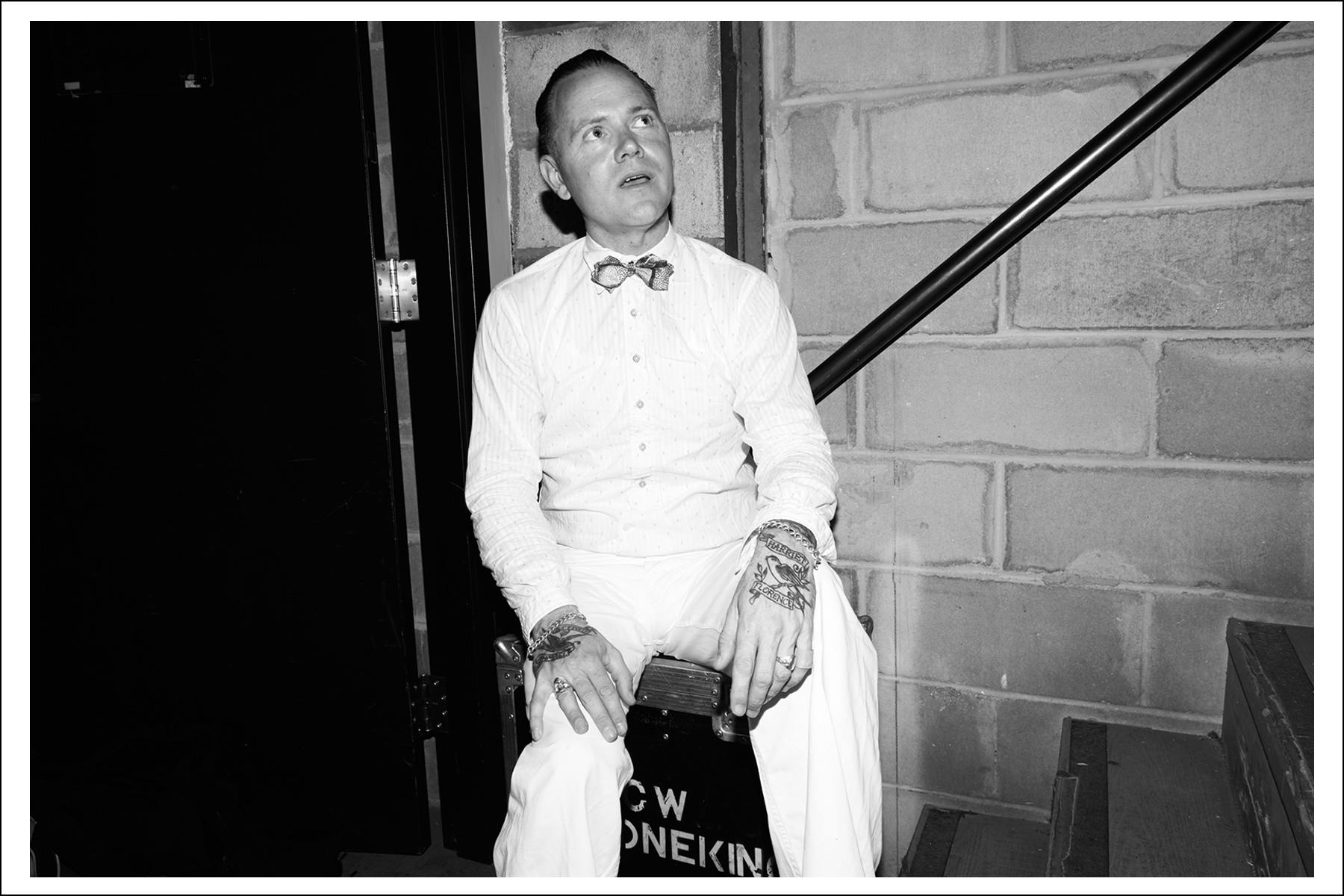 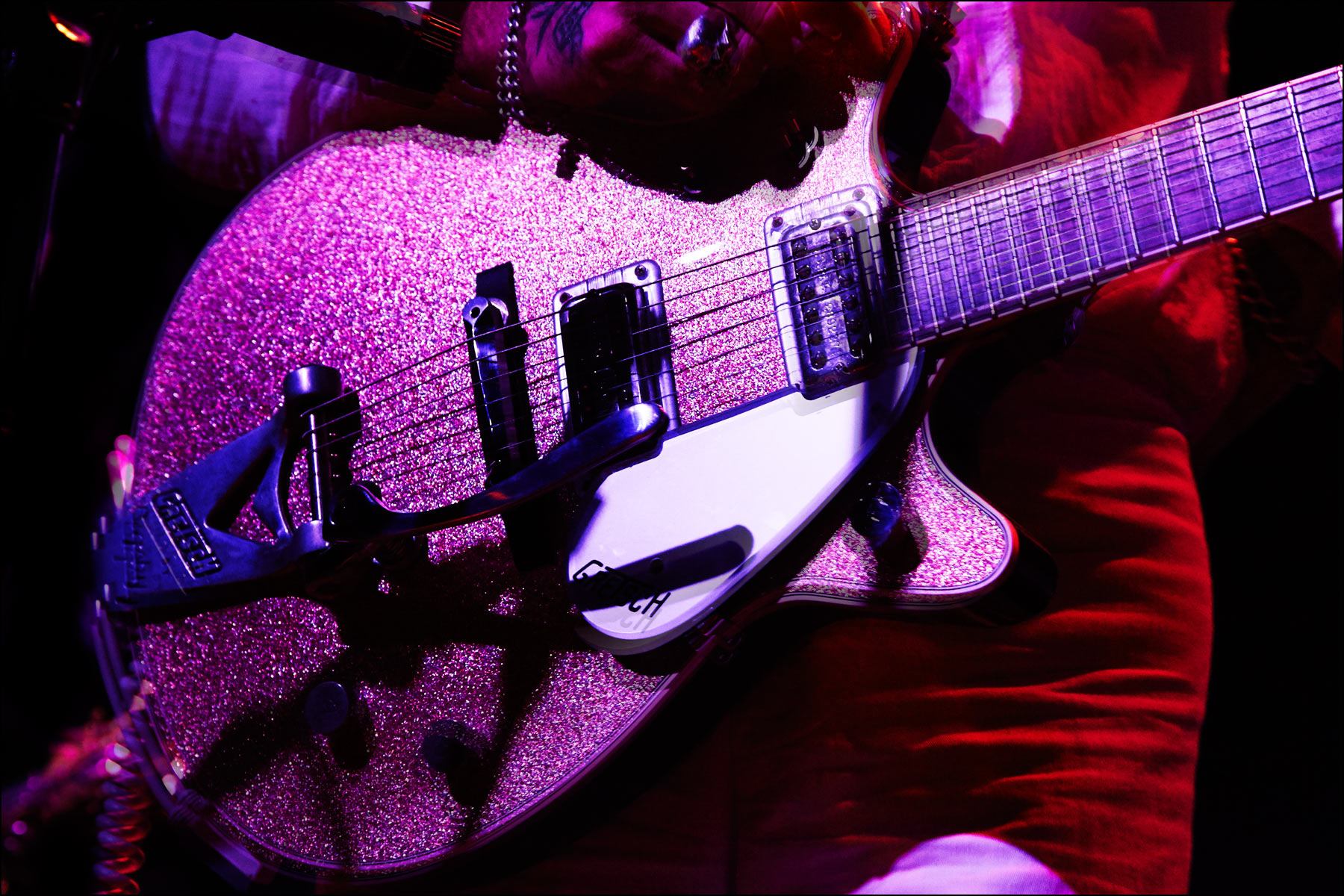 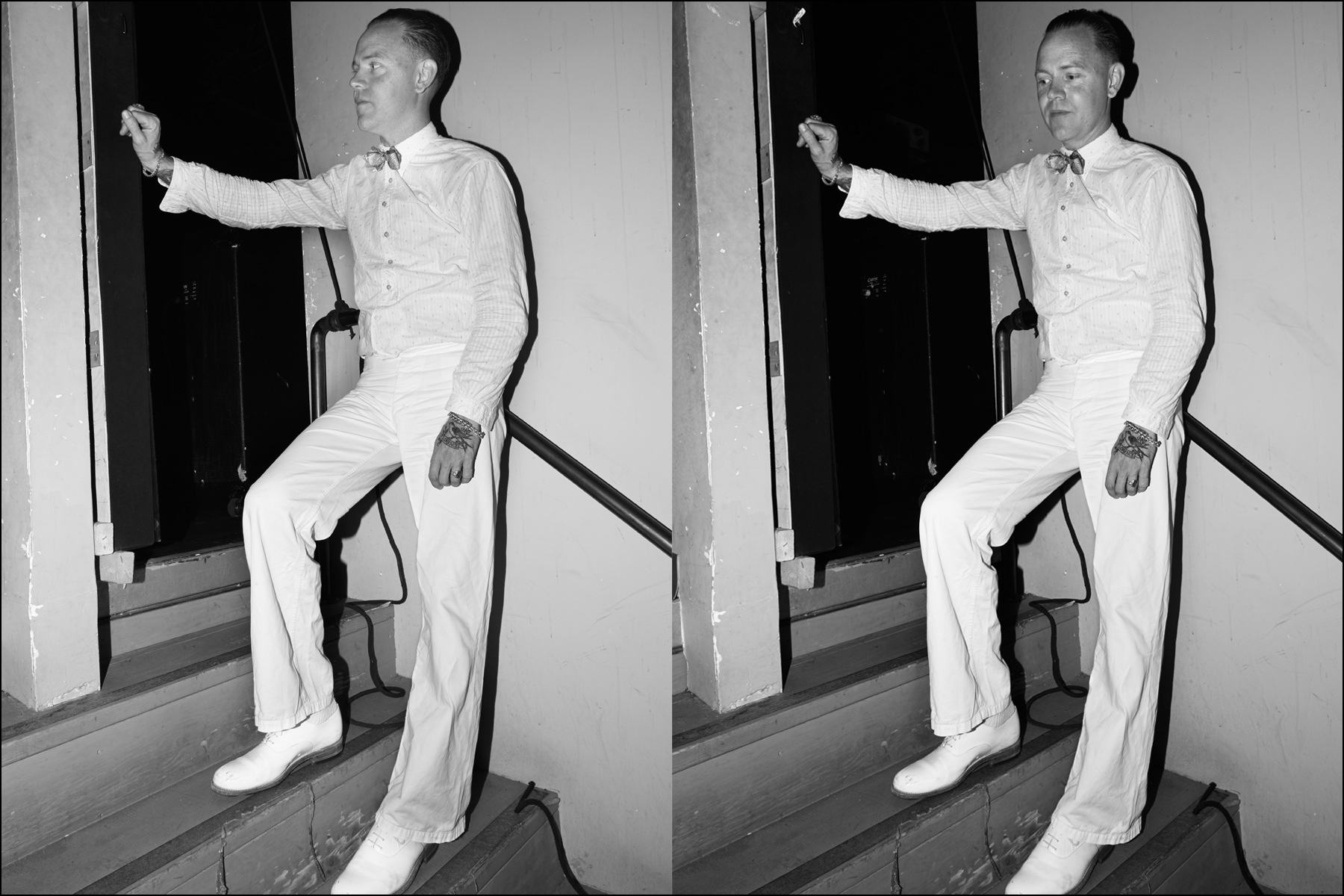 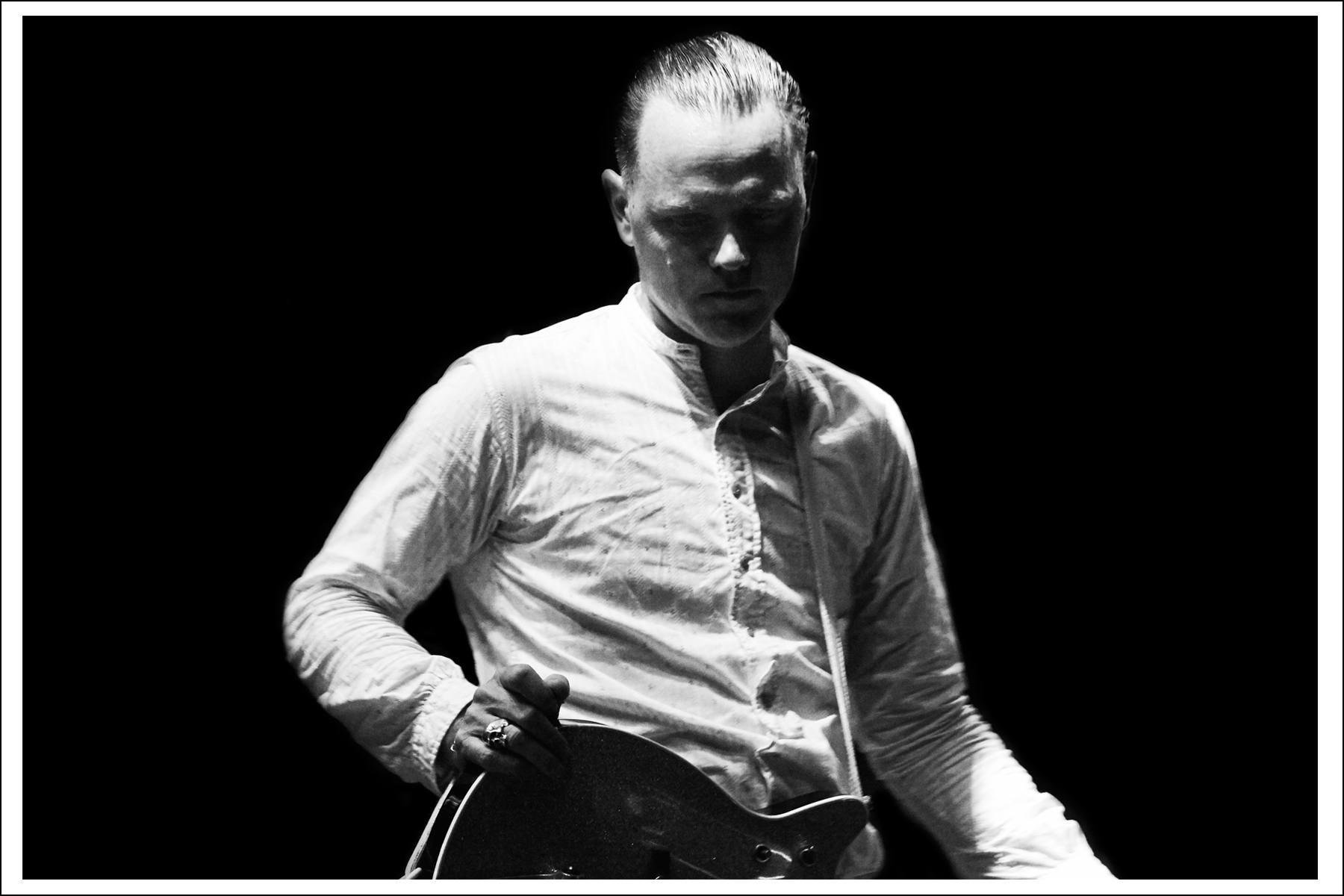 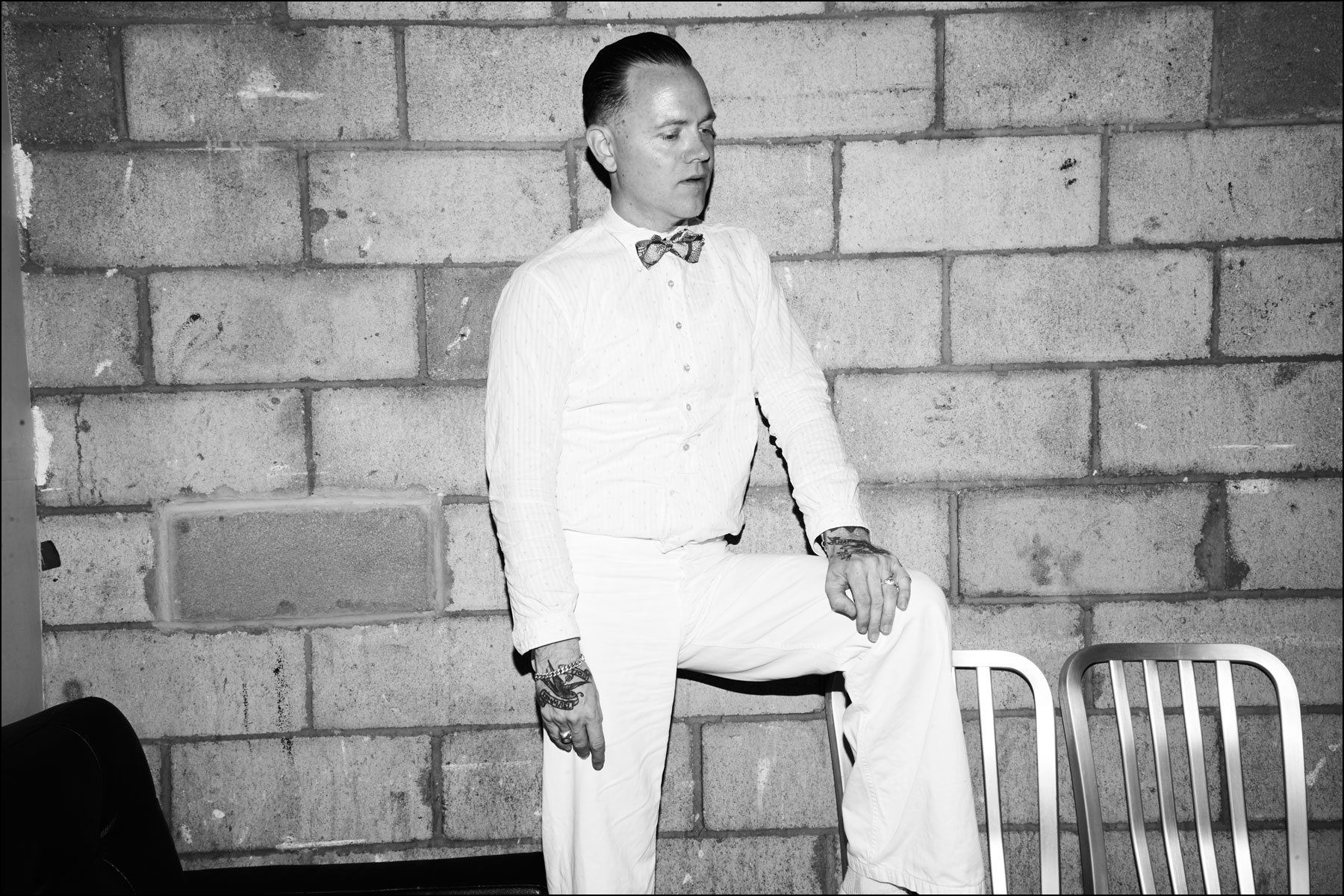 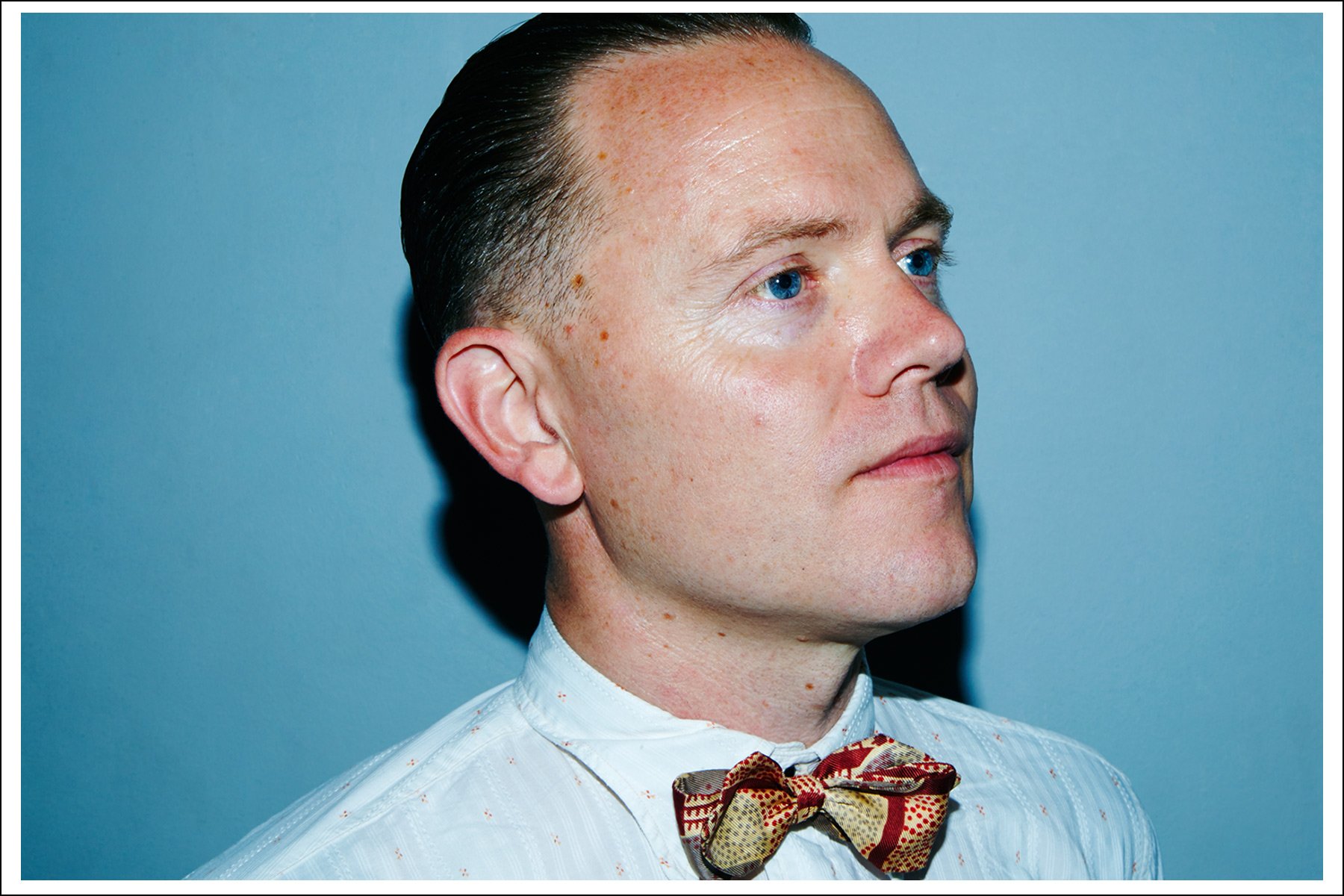 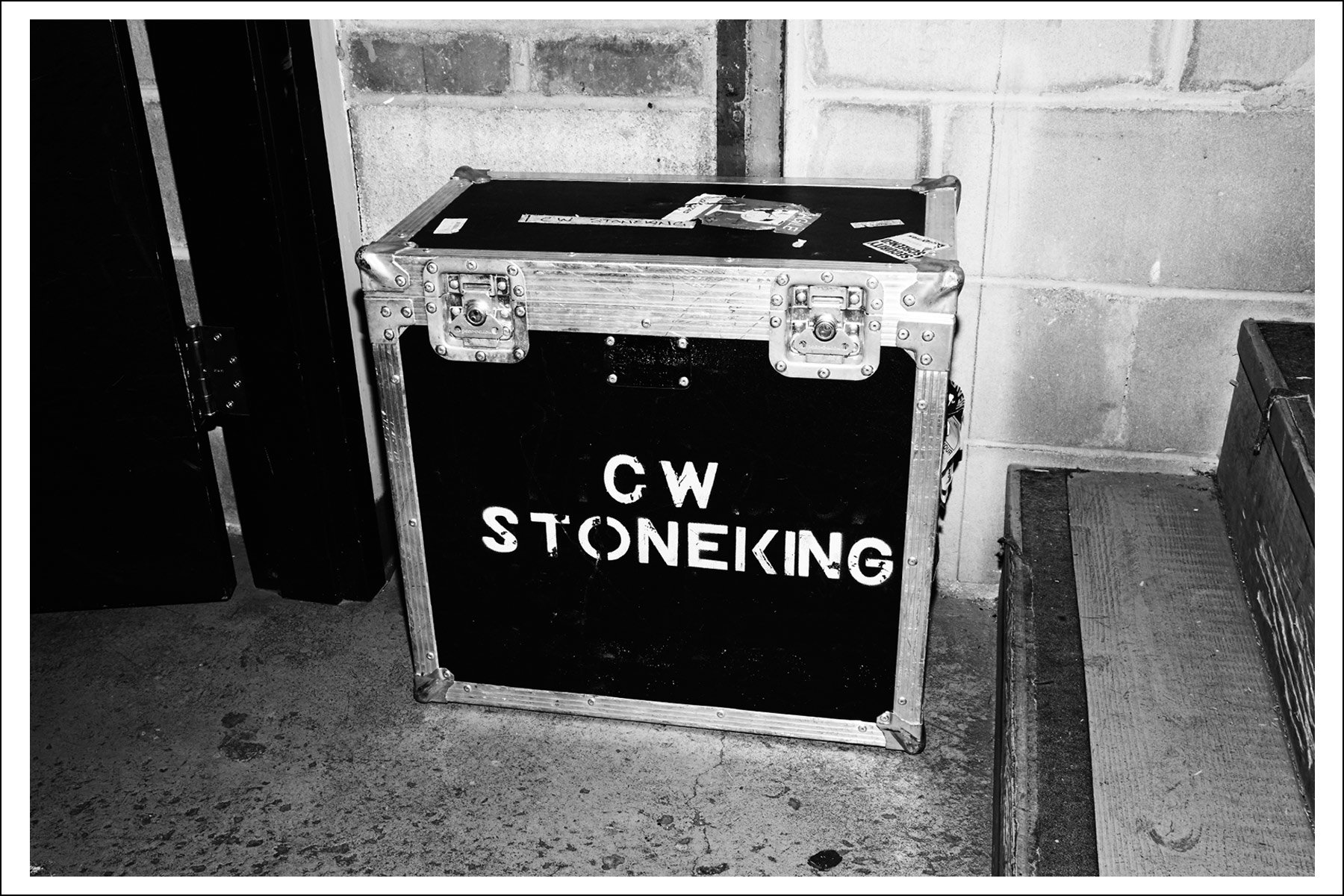 C.W. Stoneking is a gifted Australian musician. It’s difficult to describe his music, as it’s a jambalaya of different musical genres, both from the past and present. The only thing that we can say at Ponyboy is to buy his new album, Gon’ Boogaloo. Oh, and run, don’t walk, to the next C.W. Stoneking show in your city, as it’s an opportunity not to be missed. Really.  Photography Alexander Thompson. http://www.cwstoneking.com

PONYBOY:  C.W., we recently saw you perform at Rough Trade in Brooklyn, New York. Your performance was quite mesmerizing, to say the least. Simply put, it was just out of this world.

C.W. STONEKING:  Thanks very much. The band that you saw is a new lineup I put together here in the States, a condensed version of the type of band I’ve been using most recently in Australia and Europe. I have Jessica Lee Wilkes from Kentucky on bass (double and electric) and backing vocals, Kendra Kilkuskie from Oakland on drums and backing vocals, and Moist Paula Henderson on baritone saxophone. Having the instrumentalists handle the backing vocals seems to give some more urgency to the overall sound, which suits me.

PONYBOY:   We read that you discovered blues and jazz as a child. At what age did you know you wanted to be a musician?

C.W. STONEKING:   Well, I started playing the guitar as a kid and was pretty hooked on it from the get-go, though not specifically attached to one particular style of music. In my late teens I started playing music with a group of people who were more specifically into playing 20s and 30s blues music, and over a course of years that music formed a sort of backbone to my musical journey, both as a player and as a listener. Probably the reason it held my attention so well was the broad, eclectic styles encompassed or touched upon by that early recorded blues music.

PONYBOY:   How would you label or describe your music for someone who’s never heard you before?

C.W. STONEKING:   Well, I was speaking with a DJ in Belgium last night, DJ Blue Flamingo. He’ll often slip some of my songs into his DJ set alongside his 78rpm Blues, African, and Caribbean records. And he says it sounds old. But in his collecting and listening to old records, he doesn’t find anything that sounds exactly like it. It contains elements of rock ‘n’ roll, old blues and jazz, Caribbean and African music, Hawaiian, hillbilly music, as well as small details I pick up from hip hop or pop music that I hear being played.

PONYBOY:  You get dubbed as a retro musician, yet we feel you’re so much more. Tell us your thoughts on this label. Is it annoying to you?

C.W. STONEKING:  My interest in what gets called retro music doesn’t stem from a longing for a ‘bygone era’. I’m always looking for rhythms and harmonies that excite me, as well as unique singers and instrumentalists that unlock hidden chambers of my imagination and also challenge me as a singer and musician. It’s a vital, immediate experience for me. I wish to create the same reaction in the world with my music.

PONYBOY:  We’re just nuts for the Calypso inspiration in your music. It’s just so different. What is it about this music that you like?

C.W. STONEKING:  I like the rhythms, the instrumentation used, the mingling of Spanish and African sounds, the simultaneously high-flown and colloquial language employed and the theatre of the Calypsonians themselves with their fantastic names (like King Radio, Lord Executor, The Roaring Lion, Attila the Hun etc…) and larger than life status.

PONYBOY:  Your guitar playing is incredible. Did you teach yourself how to play guitar?

C.W. STONEKING:   Yes, I’m mostly self-taught. I took some lessons for a couple years as a young teenager, but mostly I’ve learned from working stuff out from records (cassette tapes usually) and just many, many years fiddling around on guitars.

PONYBOY:  We won’t ask you to name your favorite musicians, as we’re sure there must be so many and you probably get asked that question all the time. But if there is one musician that you would say was the most monumental in the making of C.W. Stoneking, the musician, who would you say it would be?

C.W. STONEKING:   There was a guy I kind of knew through some other people when I was 19 or so. He would’ve been mid to late 40s and played fantastic guitar on a Gibson Kalamazoo archtop guitar. He was also was a great singer. I only met him maybe 6 or 7 times, but he was a great inspiration to me at the time and made some kind of familiar benchmark in my mind for me to aim for through my 20s when I was really into learning a lot of old blues songs. His name was Ken Pedlar, not a professional musician. I think he was a truck driver, but a great musician all the same.

PONYBOY:   As far as recording your music, is it what one would expect? Bare to the bones, lo-fi recordings?

C.W. STONEKING:   The latest album Gon’ Boogaloo was like that, all recorded on only 2 microphones, straight to a 2-track tape machine, no overdubs, just everyone around a single mic, with me singing into the second mic. The previous album, Jungle Blues, was much more involved, a lot of overdubs and a lot to manage in the mixing stage, although I had a very strong vision with that album which made it a lot of fun to make, hearing the ideas solidify into a recording, Jungle Blues and my first album, King Hokum, were recorded using pro tools on a computer, albeit with some very nice ribbon mics and tube preamps.

PONYBOY:   Has it been a tough road, as far as finding your niche and sound, playing the streets, touring, etc…?

C.W. STONEKING:  I wouldn’t say it was real tough. I’ve always enjoyed playing music, whether I was busking in the street, playing in small bars or doing what I do now out on the road touring. There sure have been some bad gigs along the way, but on the whole, it’s been a lot of fun. I never actively went seeking a niche. My audience found me mostly via my albums when I began to make them. The toughest part for me is writing songs to a standard that I’m really happy with. It’s a challenge and doesn’t seem to get easier for me.

PONYBOY:  When would you say the turning point was for you, as far as your music career is concerned? Was it when people started noticing you and acknowledging your talent?

C.W. STONEKING:  Once I started putting out my albums, then interest began to spread, and I was able to tour outside of my hometown at the time (Melbourne, Australia) and to take a band on the road. Before that I mostly played solo. Any money I got I put into the music, taking my band through the UK and Europe, and now in the US. It’s a slow process when you do it independently, but there’s always something happening.

PONYBOY:  Your voice is quite unusual, not just when singing, but speaking as well. It’s as if you’ve lived a hundred years. Does this eclectic voice come from years of interesting experiences and stories?

C.W. STONEKING:  Well, I have an ungainly voice. It’s always been that way I think. I think it’s at it’s best when I’m turning it loose on a song. But in normal conversation, I think it’s ungainly, like I got a heron folded up in my throat, croaking away in there.

PONYBOY:  You’ve got such personality, both on and off stage. Have you ever acted or been approached to be in a movie? It seems as though you’d be a real natural, quite intriguing to watch on film.

C.W. STONEKING:  No, I don’t like acting. I did a voice for a cartoon character once, but don’t really like to act. I find it very different than playing music or singing. I think it doesn’t suit my personality.

PONYBOY:  You just released your first US album on June 3rd. Is it on your King Hokum label?

C.W. STONEKING:   Yes, correct. Gon’ Boogaloo is my first US release, and it’s out on my own label, King Hokum Records. It’s been released already in Australia, but as I said, things take a bit more time sometimes when you’re an independent operation. I have my US band and will be touring all over the US in support of the album release through 2016. You can check my tour dates on my website http://www.cwstoneking.com  if you wanna catch a show.

PONYBOY:  How is this new album different from your past releases?

C.W. STONEKING:  I play the electric guitar and I use a lot of female backing singing in the songs. Those are the 2 main differences. The music is a bit more rock ‘n’ roll sounding.

PONYBOY: You’re touring endlessly to promote this new release. Do you go home to a family? Or are you the traveling musician with very little roots, always on the go?

C.W. STONEKING:  I have a wife and 4 kids in Australia, but I’m always traveling. Sometimes I’m off the road for a long stretch. But this year, and probably next year, I’m going be out playing a lot.

PONYBOY:  You have a great style of dress. We just love the white shirt and trousers with bow tie. Is it primarily your stage wear, or how you dress daily?

C.W. STONEKING:  I dress like that all the time, It’s one less thing I gotta think about.

PONYBOY:  Do you wear vintage clothing? Are there any men’s clothing designers or labels that tend to fit with your sense of style?

C.W. STONEKING:  I don’t really wear vintage clothing. I used to in my 20s and 30s, but the good stuff I used to find has dried up. My favorite shirts are made by my friend, Christophe Loiron, at Mister Freedom. I have a bunch of shirts from him and also some of his jeans that I wear round the ranch when I’m fed up with keeping whites white out in the dust. I pick up bits and pieces here and there, sweaters from North Sea Clothing, sometimes a jacket from Wrangler or LVC or somewhere. I get repro pure cotton WWII white sailor pants from one joint in California, and have been getting them for close to 10 years. Nos British Naval officer white shoes. The only vintage stuff I really wear all the time are my bow ties.

PONYBOY:  Tell about your aspirations, as far as your music career is concerned?

C.W. STONEKING:  Pretty much, I’m just trying to surprise myself musically, to make something with a strong foundation, but that can blow my mind a bit when I make it. If I can keep doing that and have a broad touring network of cities and countries to visit and perform in, that’s all I really want. I guess the more well known you get, you can get more places, do a song with Kanye. I don’t know. 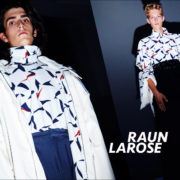 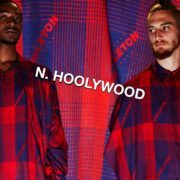