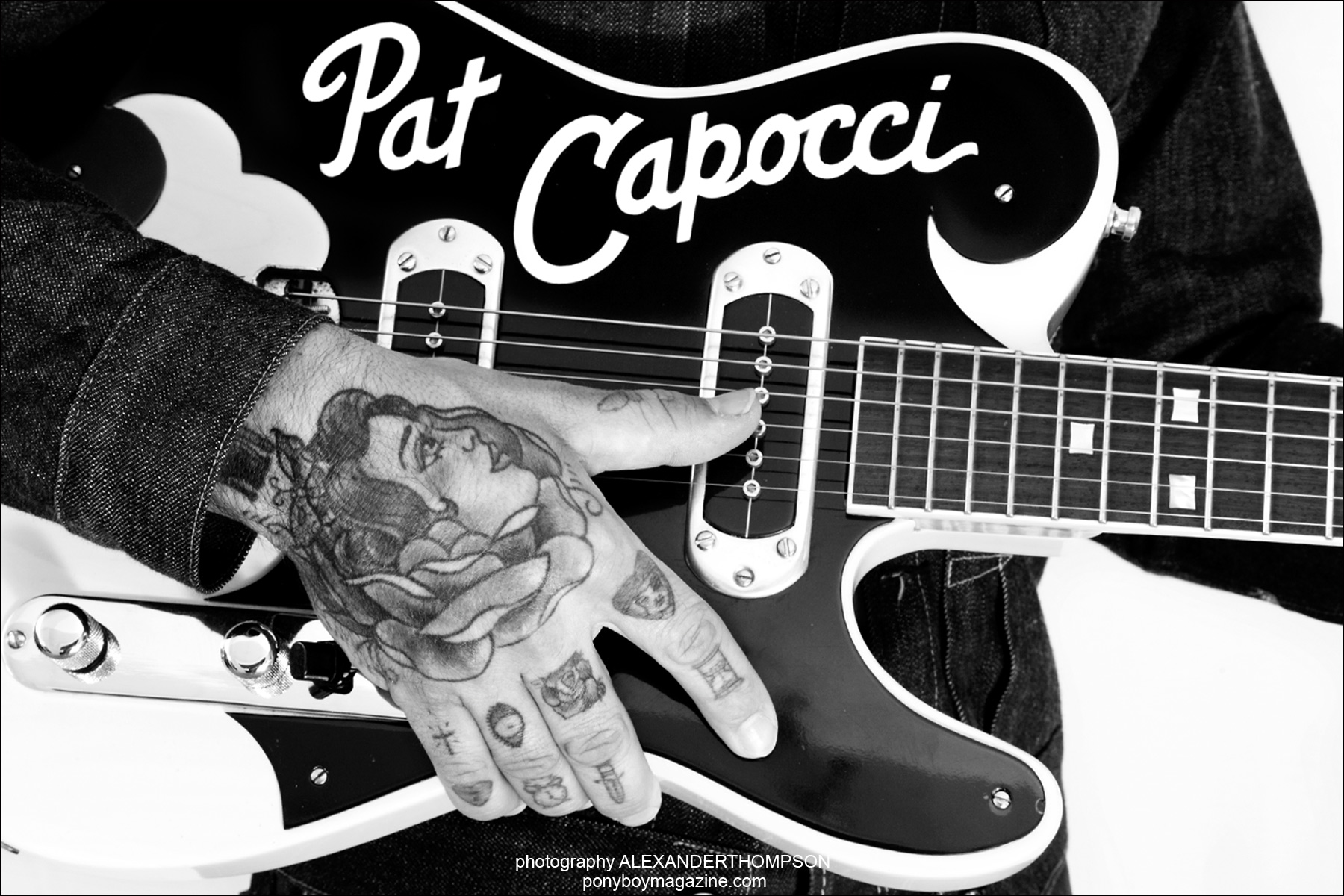 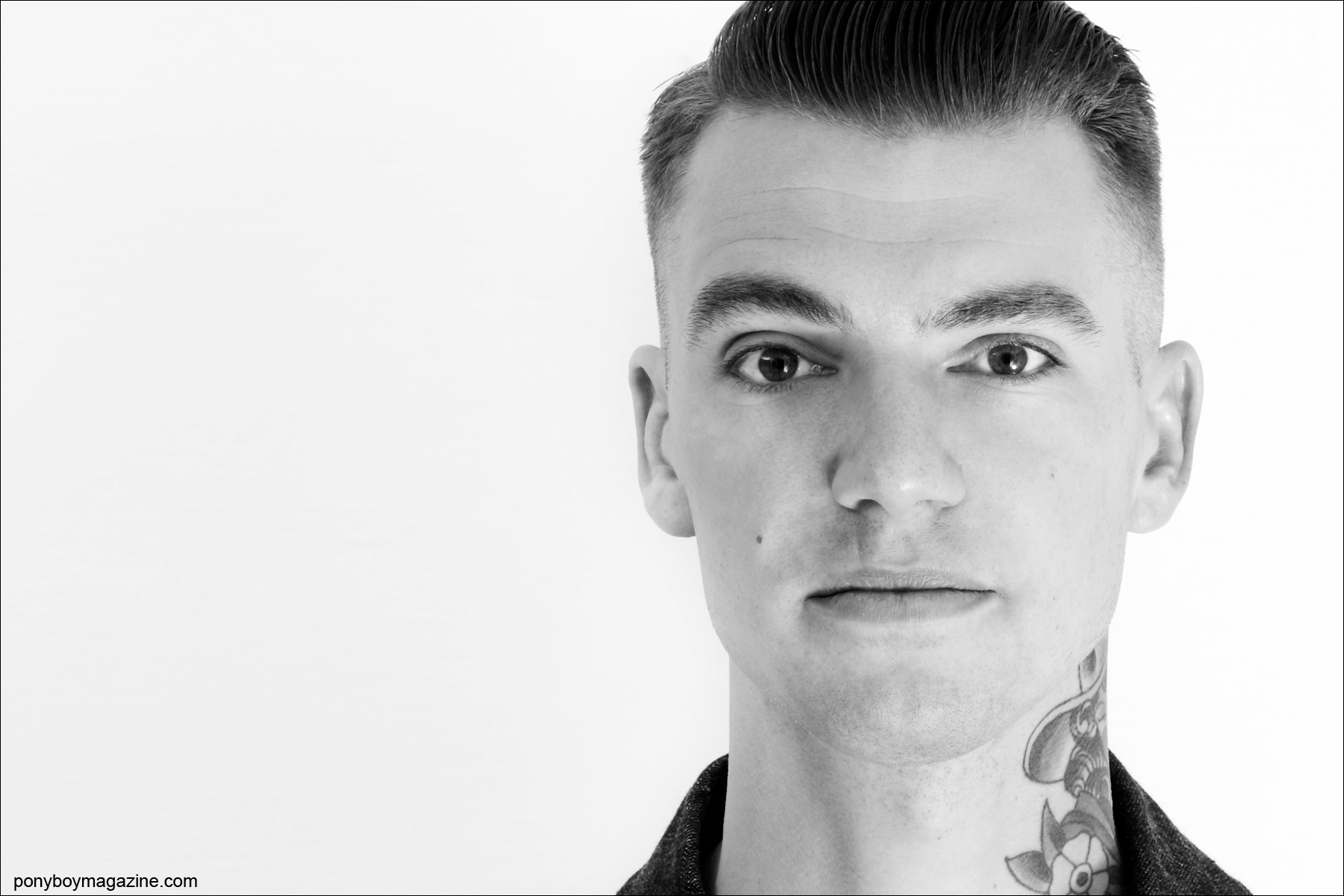 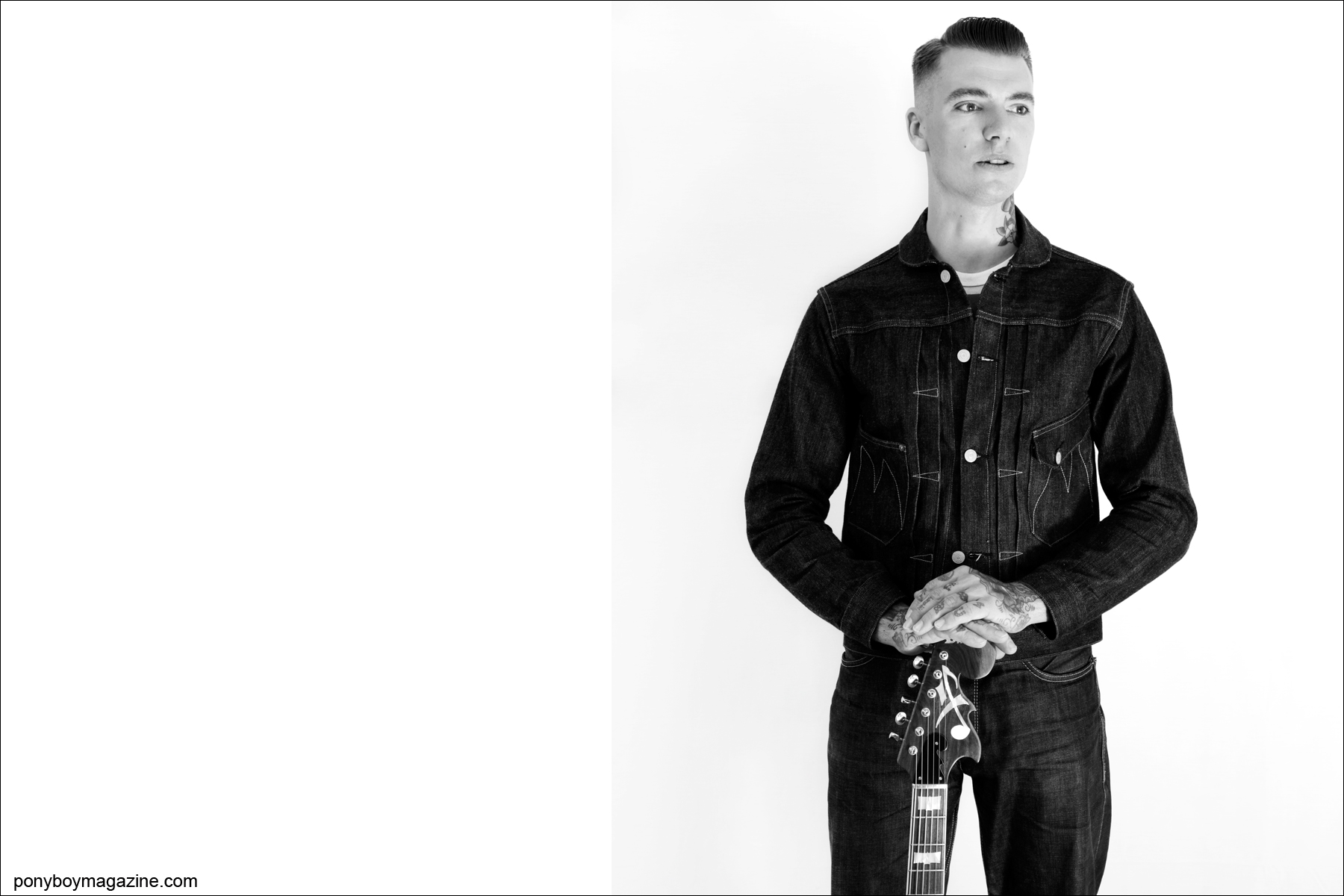 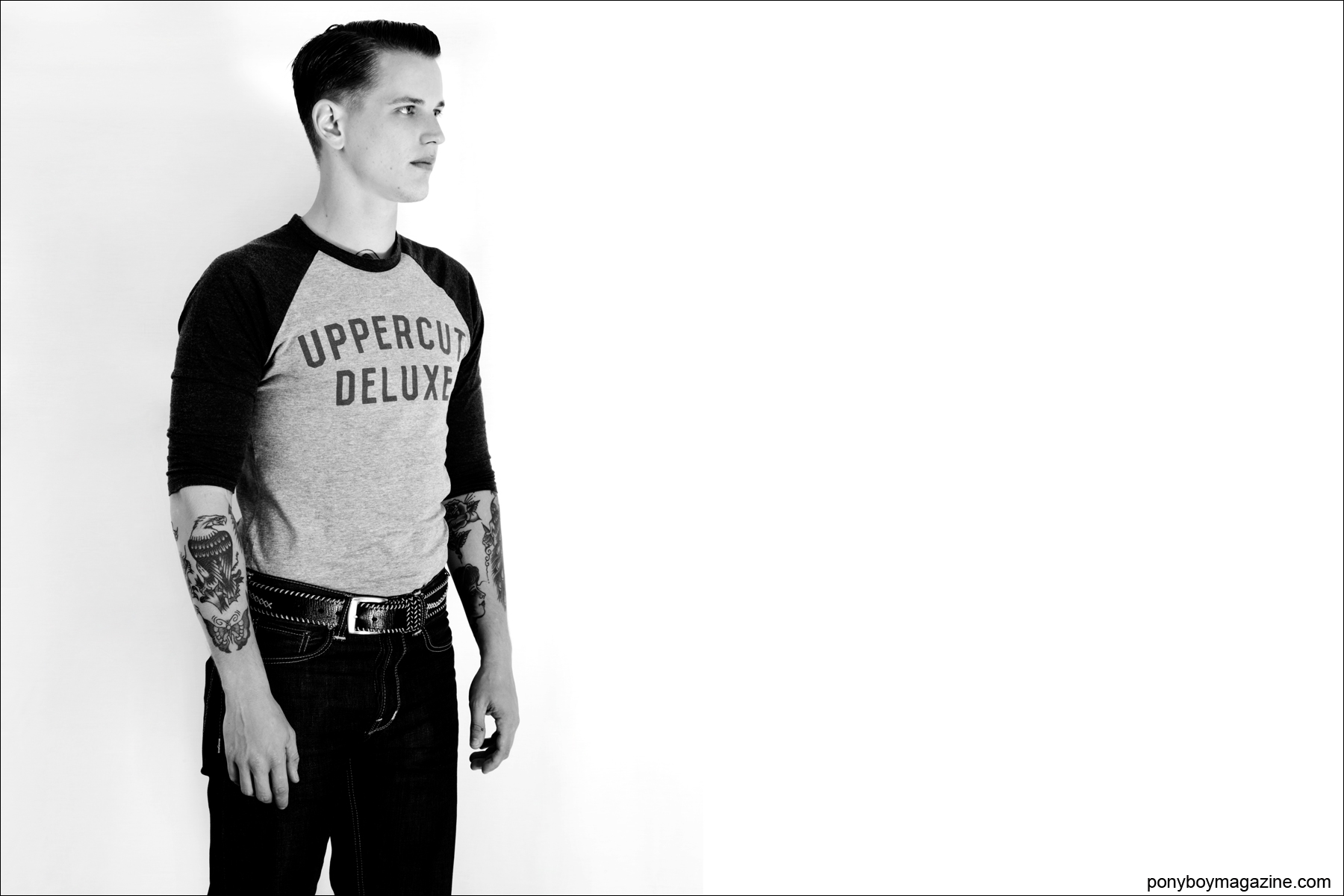 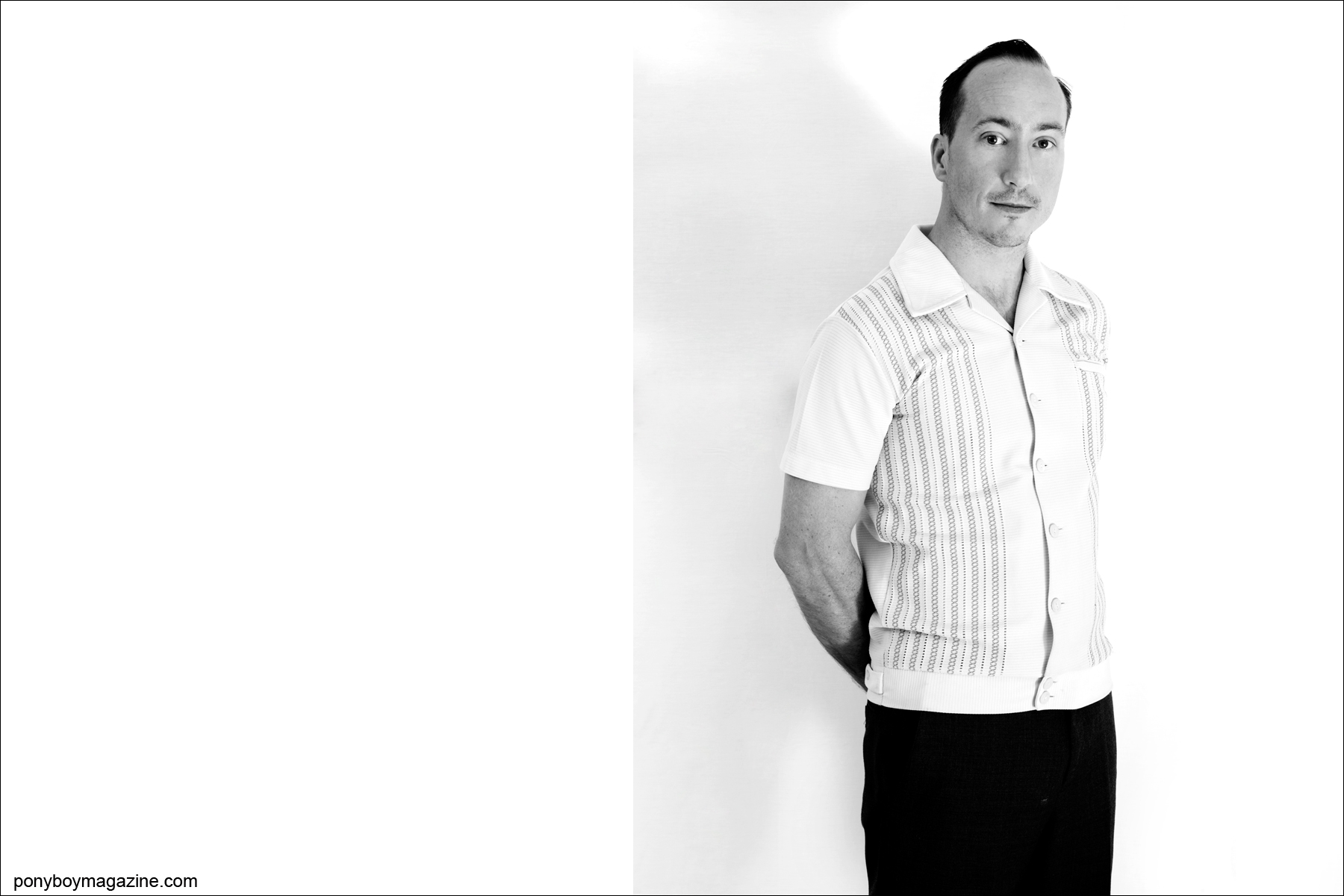 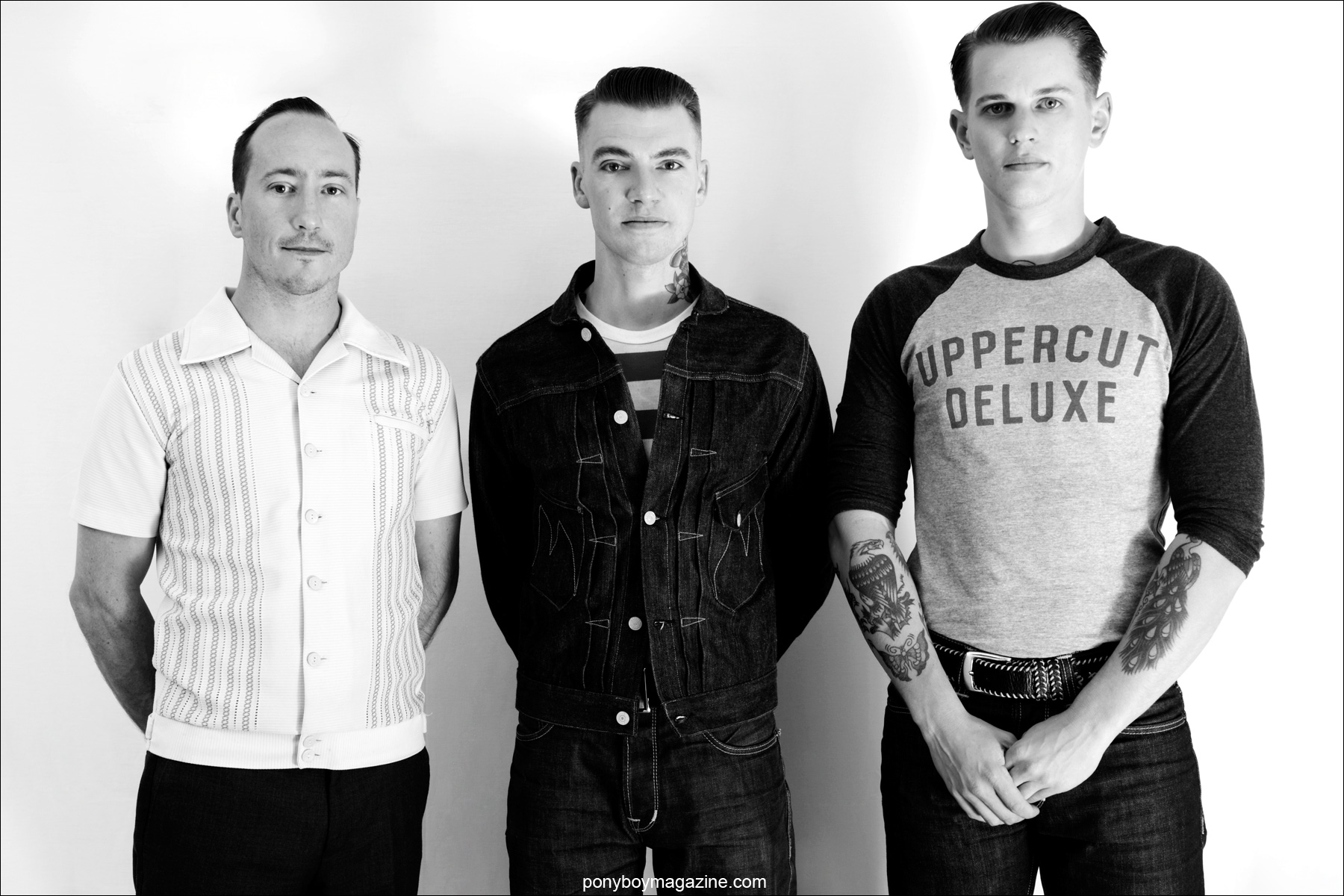 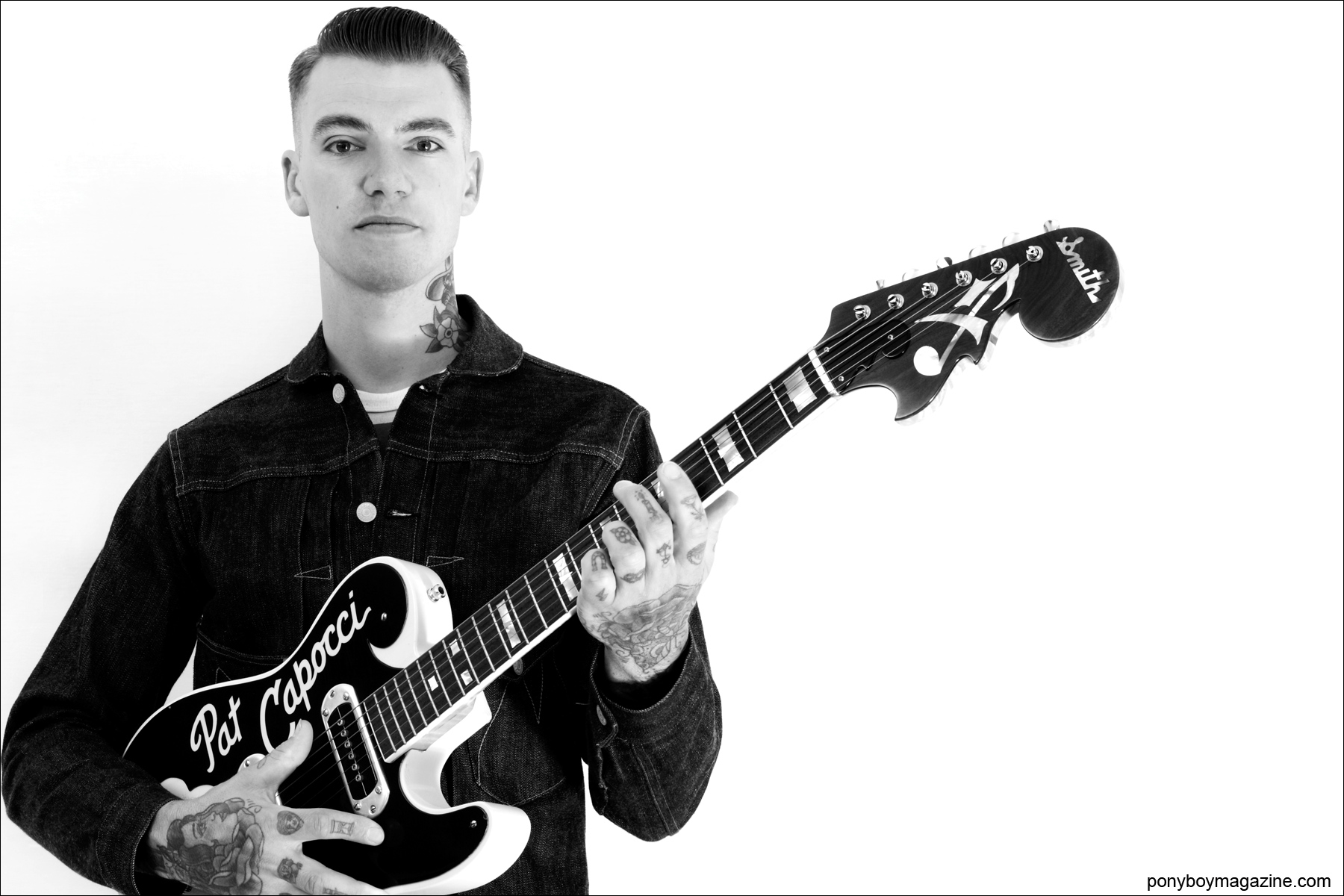 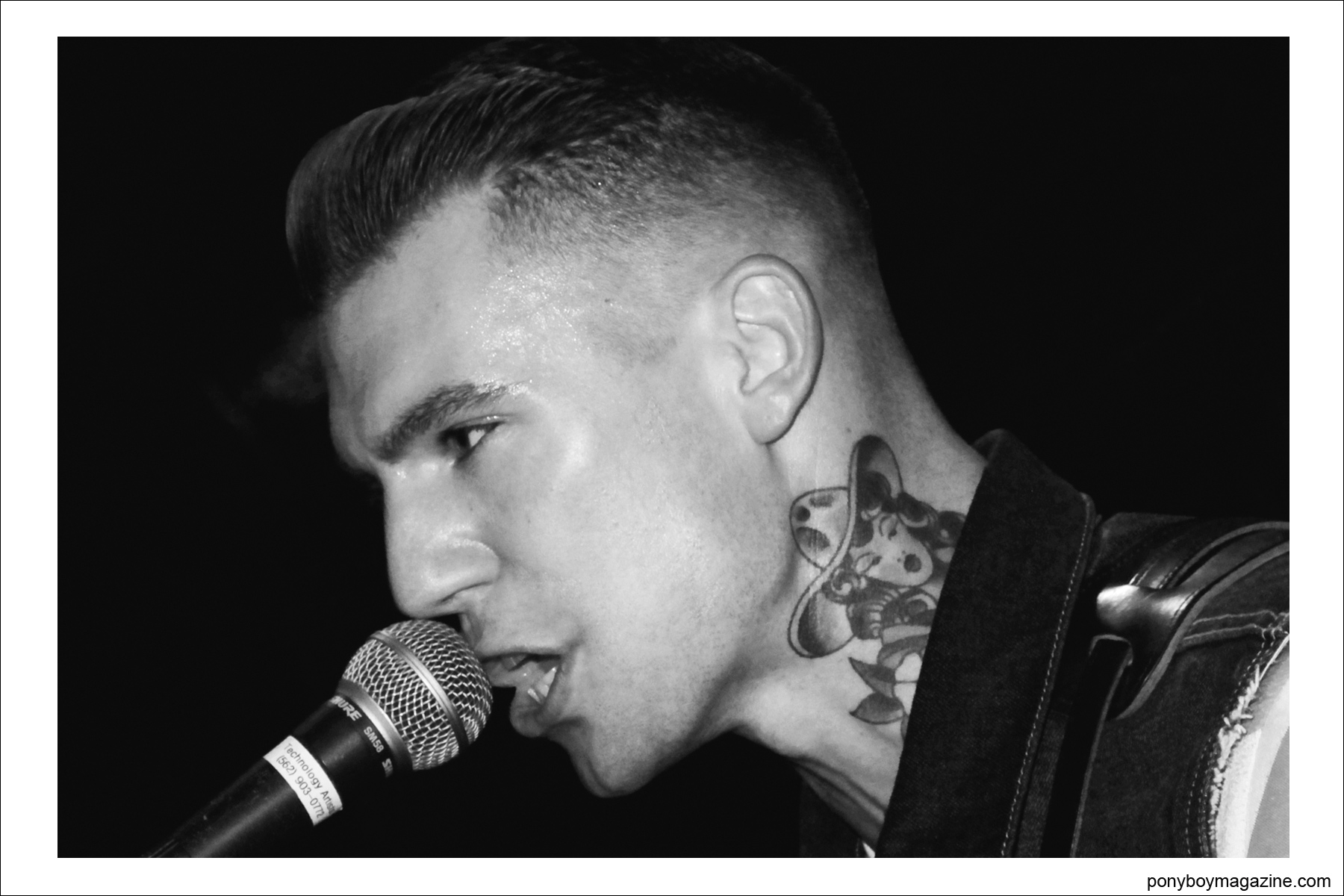 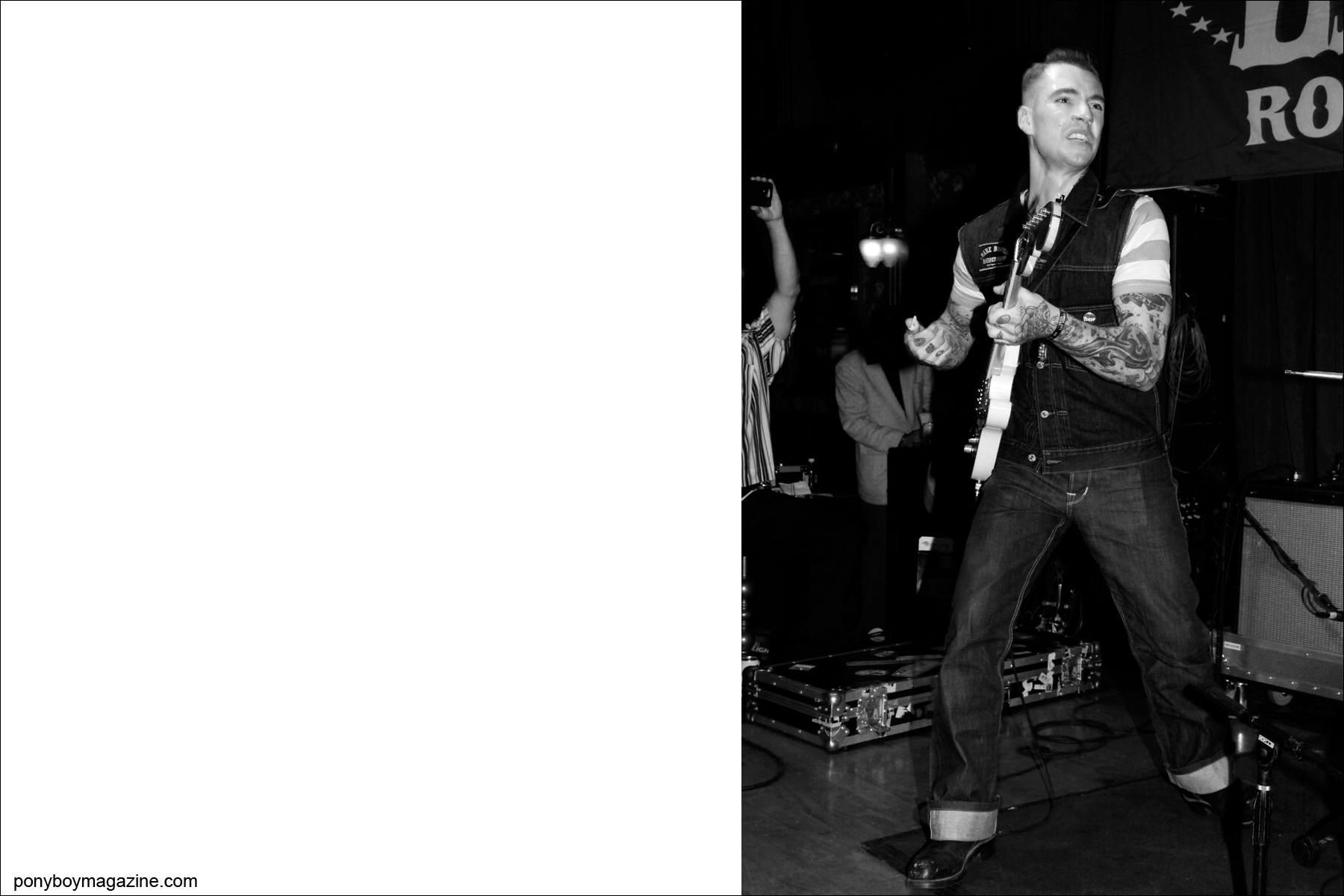 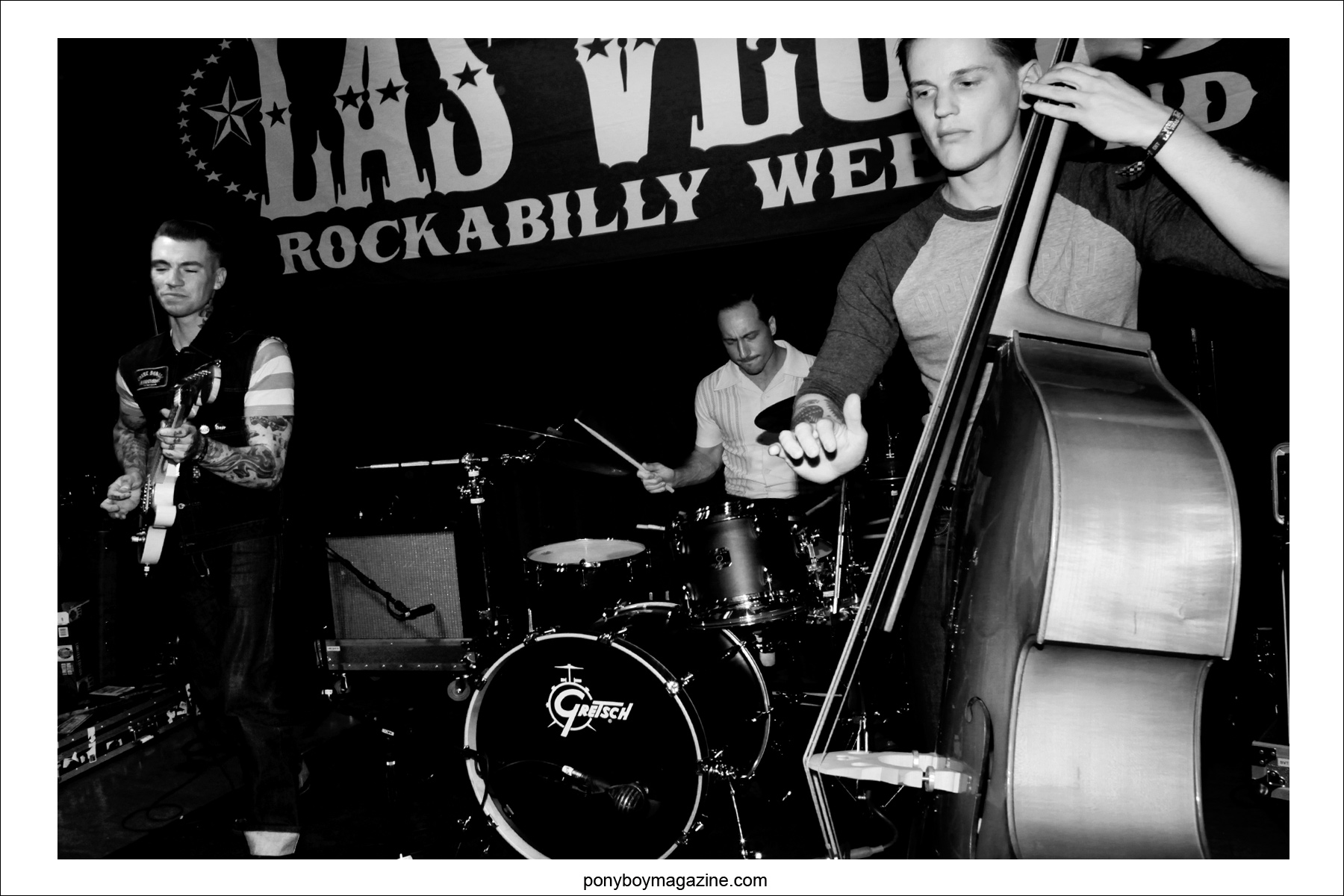 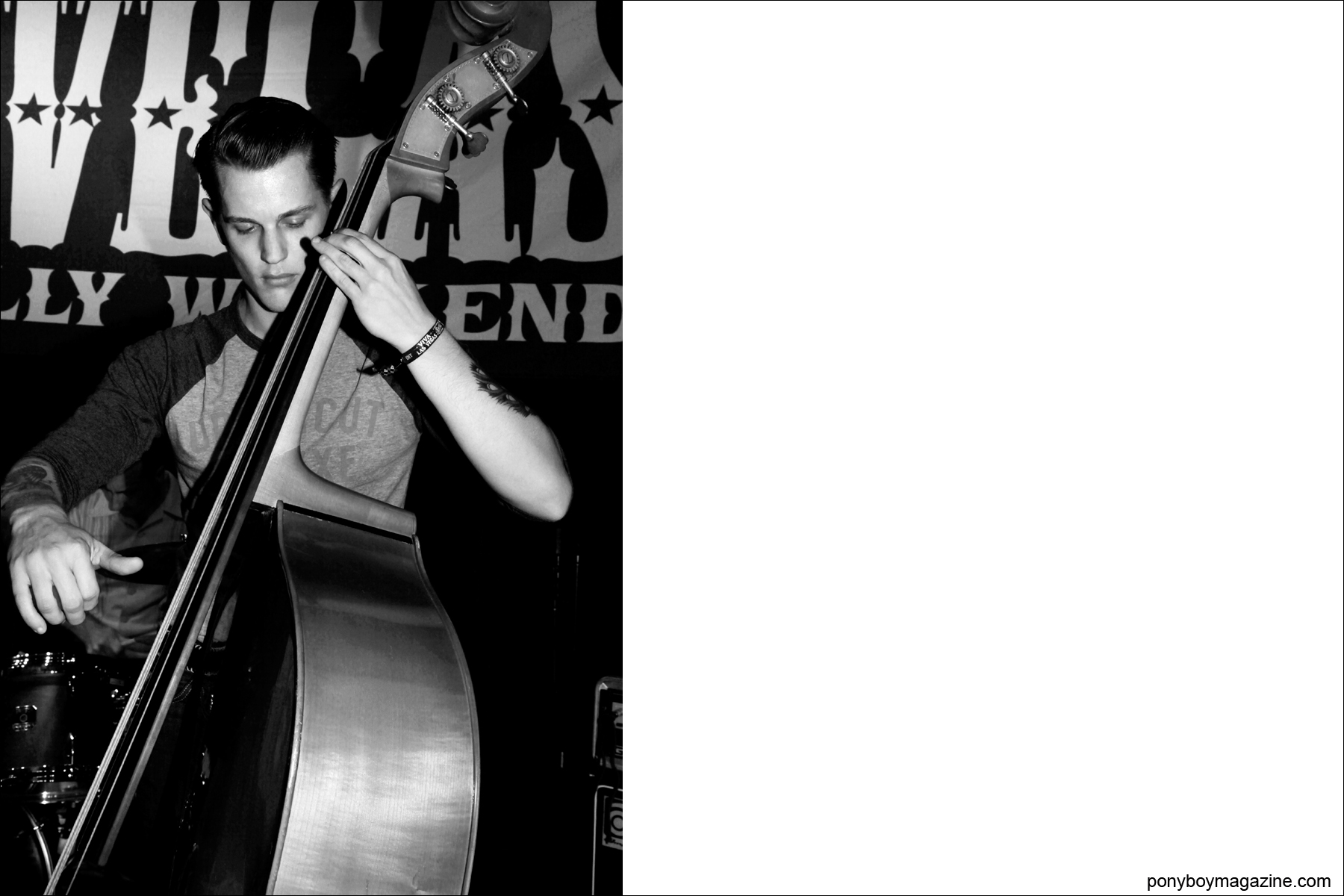 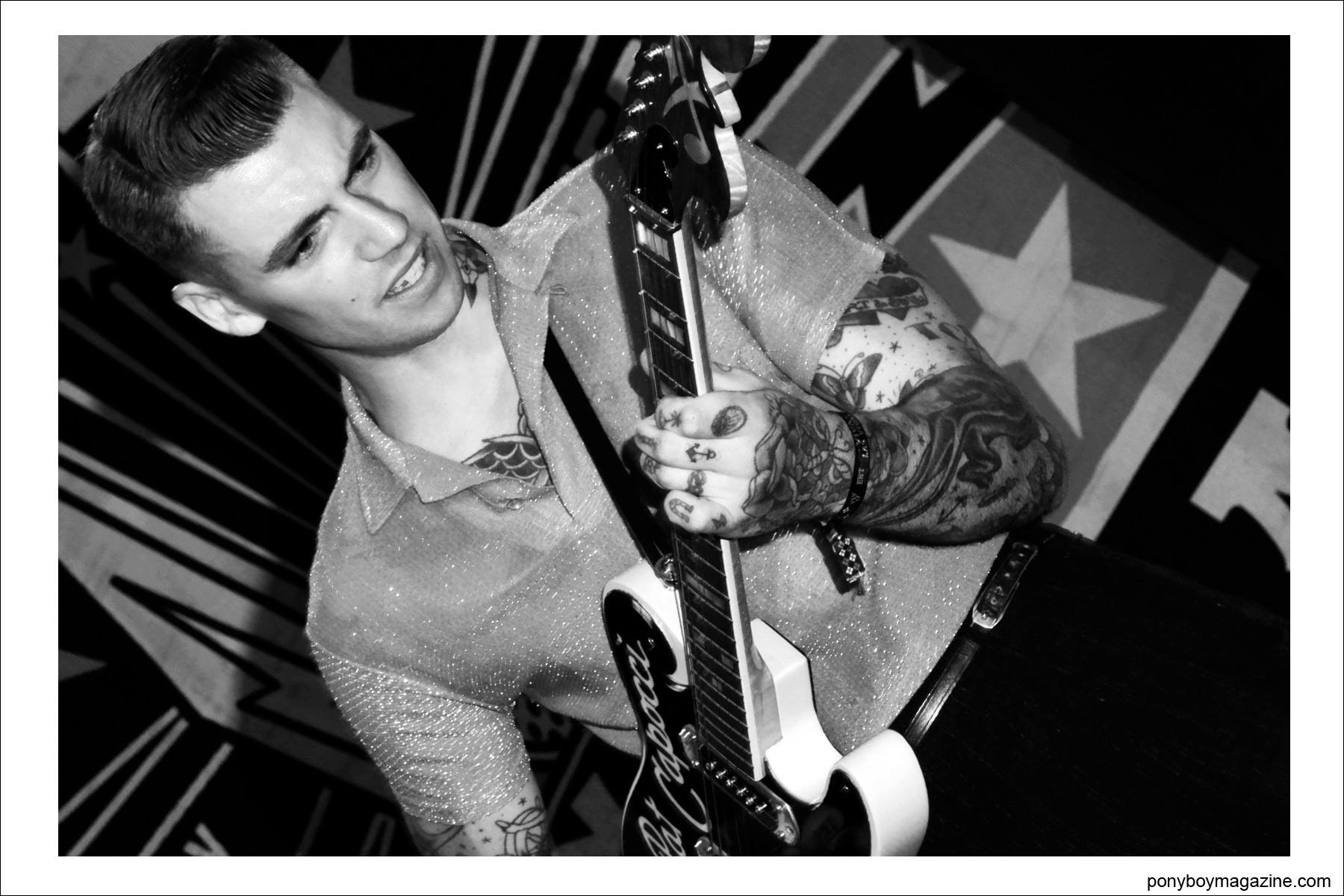 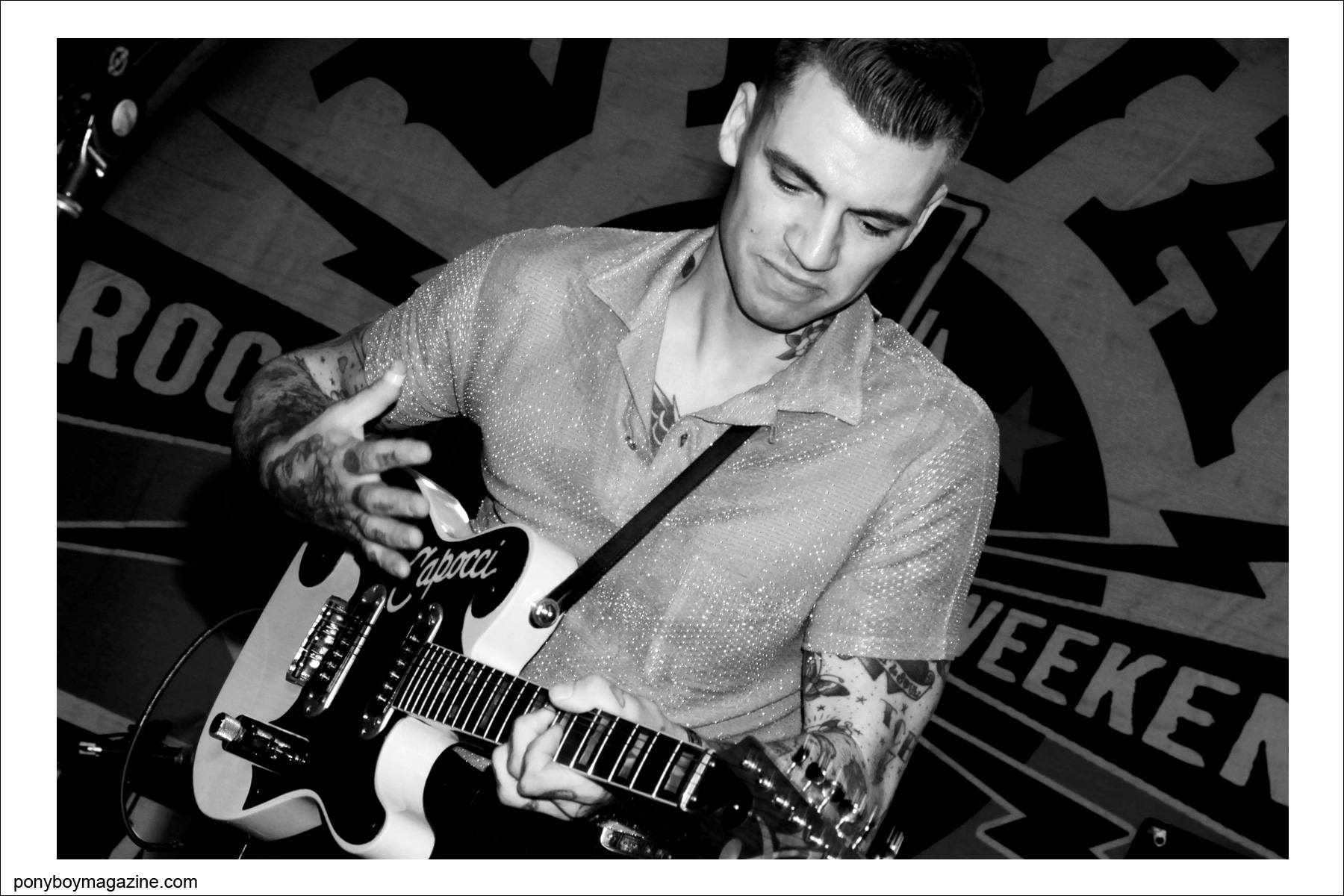 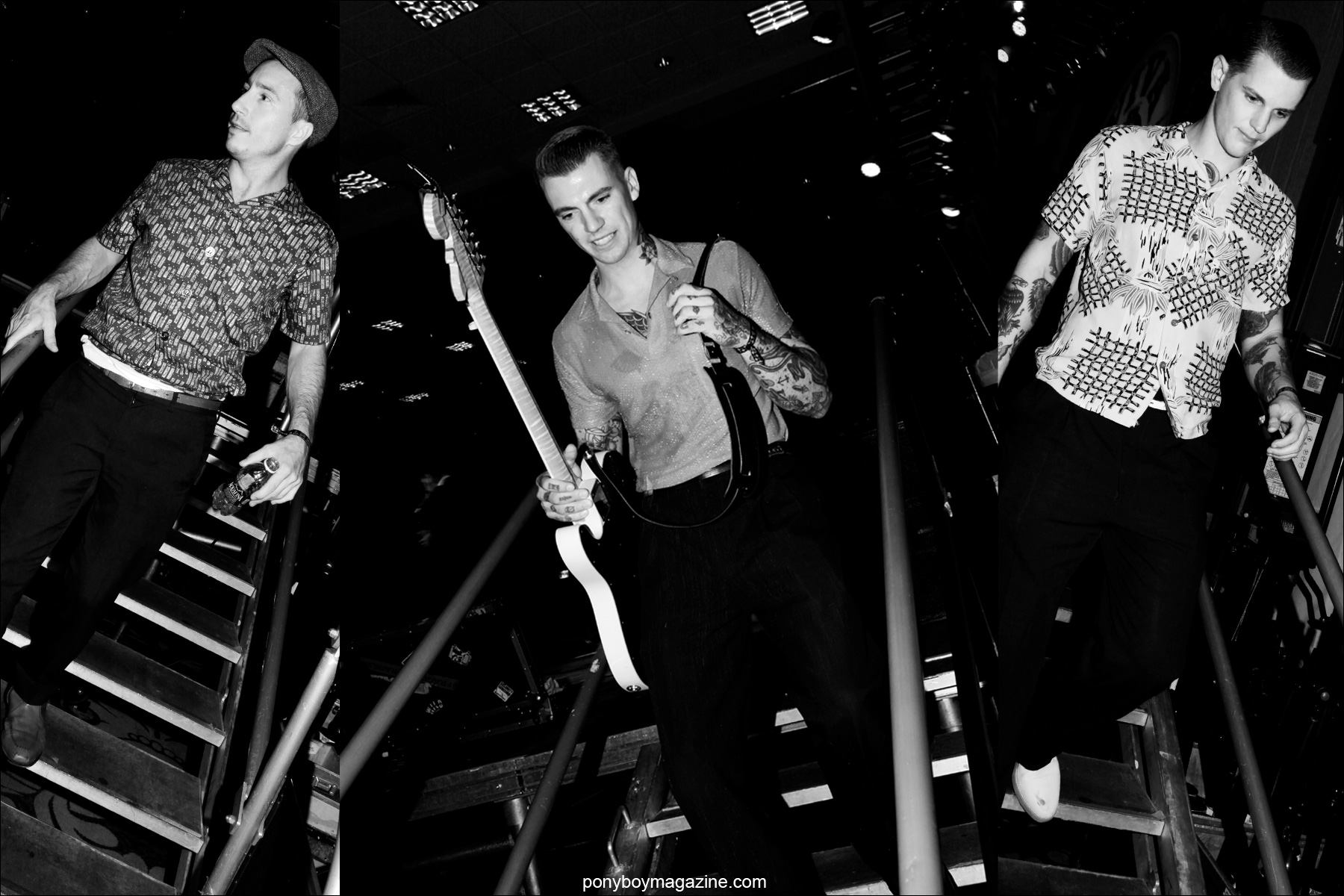 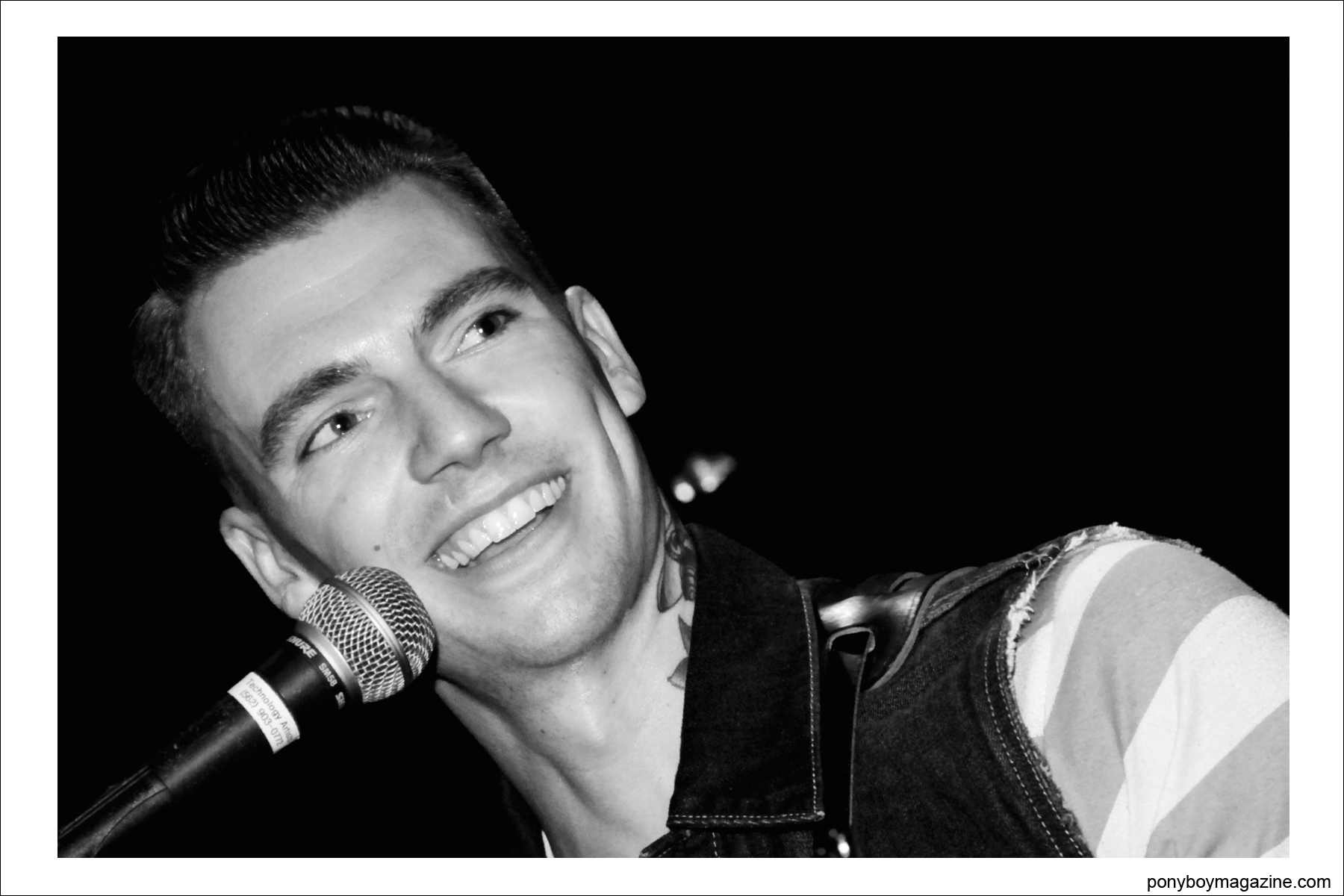 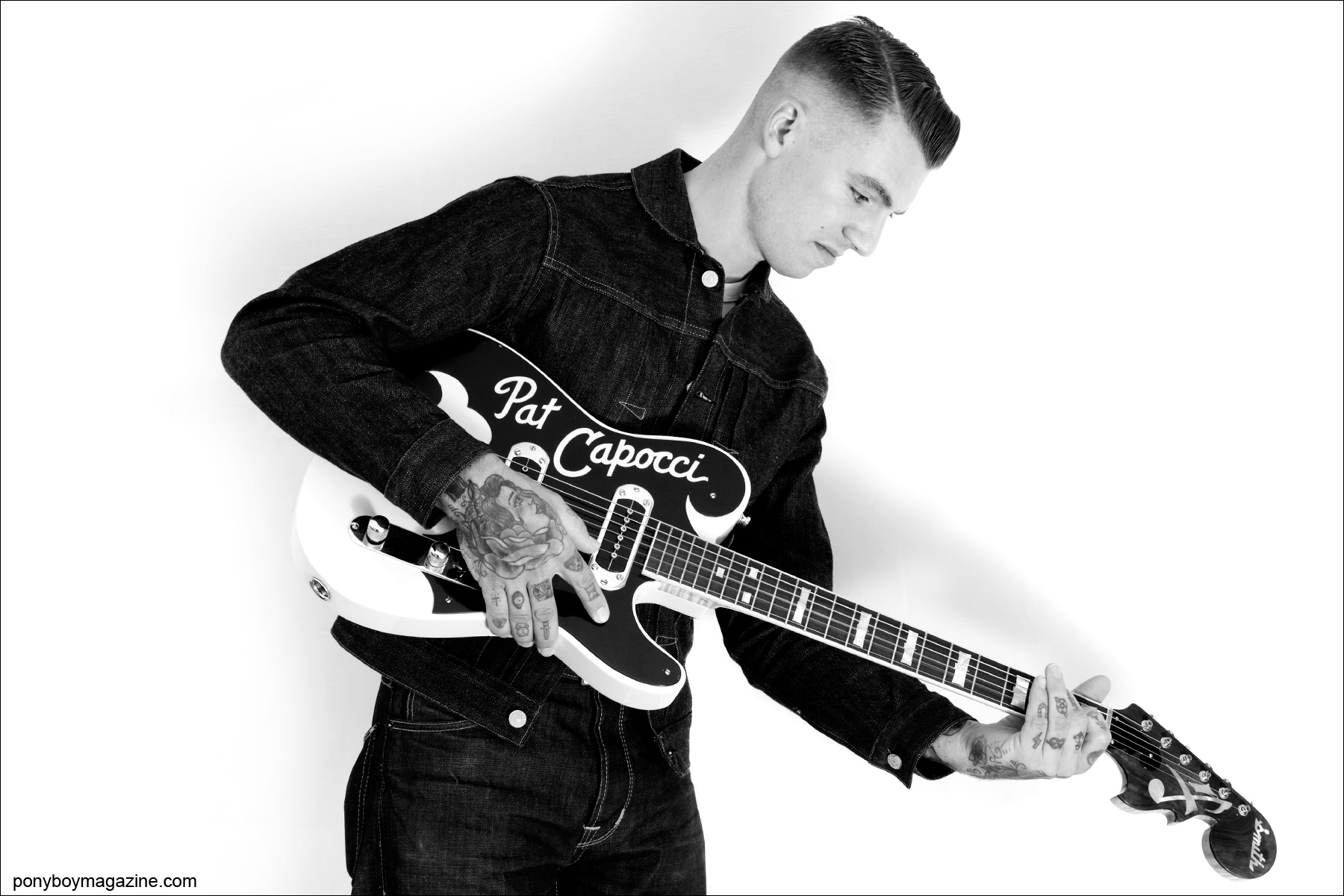 Pat Capocci is a young Australian rockabilly sensation on the Wild Records label out of California. We caught his much anticipated performances at Tom Ingram’s Viva Las Vegas rockabilly weekender this past April. We were also able to squeeze in a quick shoot with the talented musician and his bandmates. His guitar playing is unreal and demands a presence on stage.

PONYBOY MAGAZINE:  Pat, how did you get into playing music?

PAT CAPOCCI:  My folks had a super huge influence on my musical tastes when I was growing up. Dad played guitar and had a pretty epic collection of Chicago blues and early folk records. So, from as early as five years old, I dabbled with the guitar and was hip to the right kind of tunes.

When I hit my early teens, I had been playing for a while and grew a little bored with the guitar until I discovered punk rock. My love for skating and surfing all tied in with my musical taste/lifestyle and renewed my love for it. When I was around fifteen years old, I made a solid decision that I wanted to become a better player and get serious. So, I spent every moment in my room listening and jamming to the records I loved. When I wasn’t busy doing that, my dad took me to the local pub and I would jam with whomever was there. These were the best lessons, as I had to think quick and use everything I had been learning to get through the sessions. I’m still super thankful for all the guys who let me stumble my way through their tunes. And from there, I just kept working hard, listening, learning and playing.

PONYBOY MAGAZINE:  And, so how did you get into the genre of rockabilly music?

PAT CAPOCCI:  I guess, at that same time I decided to get super serious about the guitar, I started digging deeper for guitar-orientated records. The genre really didn’t matter as long as I could learn something from the music and apply it to my playing. I used to hunt through the “roots” section at the local record shop and dig through R&B, western swing, bebop, country, hillbilly and then eventually found a few rockabilly records. At the same time, the only “new” rockabilly records I could get were by Deke Dickerson and Big Sandy with T.K. Smith and Ashley Kingman pickin’ on them. And those guys really helped bridge the gap between past and present and taught me to embrace all those great genres.

PONYBOY MAGAZINE:  What’s the rockabilly scene like in Australia? Is it small?

PAT CAPOCCI:  Over the years the scene in Australia had dwindled. In the 80’s and early 90’s there was a solid crew. And for me, some of the musicians from these eras were my earliest inspiration and still are. But in the last fifteen years things have definitely picked up and there are a lot more bands and folks from all walks of life who have embraced the scene, which is a great thing.

I also feel that vintage fashion has been a catalyst for a lot of people discovering rockabilly music. I guess well made, stylish and timeless clothing has struck a nerve in the trendy hipster circles. Funny enough, through clothing and digging a little deeper, this crew now has a soft spot for the music as well. That all said, compared to Europe and the US, the Australian scene is tiny, but it’s definitely growing.

PONYBOY MAGAZINE:  How did you get signed with Wild Records?

PAT CAPOCCI:  We had released three records, two split cds and we played on countless sessions with Australian label Press-Tone Music over an eight year period. The relationship we had was great, and still is. But, it was time for a change.

A lot of the work we were doing was moving overseas, so we needed a label that covered a lot of ground internationally with a strong name and a good reputation. The fact that we were friends with a lot of the Wild bands made the decision to team up with Wild Records super easy.

PONYBOY MAGAZINE:  Do you have a camaraderie with the other Wild acts?

PAT CAPOCCI:  For sure, I’ve know a lot of the guys for years now. We all seem to cross paths and end up at the same festivals when we’re touring Europe or the States. Viva Las Vegas was great for that this year, as we got to reunite with a lot of old friends and meet some of the new younger acts that are on the Wild label.

PONYBOY MAGAZINE:  We think you’re part of the next wave of younger musicians in the rockabilly genre, bands that are talented and will have longevity. What other bands would you consider to be in this group?

PAT CAPOCCI:  Thanks for the kind words, and also for using the word “young” in the same sentence as I’m thirty this year. So I’ll take any compliment about age that I can get at this stage! Ha! Ha!

I guess for some folks we’d be considered “new” as people are still discovering our music. But the reality is that we’ve been playing for over fifteen years already, and that’s a lot of gigs, tours, recording, and travel under our belt. I think longevity comes with being true and honest to yourself. Just stick to your guns! And that’s why I dig guys like The Walters, The Zazou Cowboys, Mary Simich, Nico Duportal, The Rhythm Shakers, JD and The Doel Brothers–all killer and no filler!

PONYBOY MAGAZINE:  We saw you play at Viva Las Vegas this past year and are really impressed with your guitar playing. It seems to almost crossover to a heavy rock at times. Is it safe to say this, even though the genre of music is different?

PAT CAPOCCI:  Thanks for the kind words. I am glad you dug what we did. I’ve never really thought of my picking like that before. But, yes, I guess it does touch on a heavier shredding style when we lock into a groove and start jamming. All of my favorite musicians are all round players, not slaves to any particular genre. I like to keep to that frame of mind on all gigs, keep my ears and mind open, and just play music.

PONYBOY MAGAZINE:  What artists did you grow up listening to? Who were your influences?

PAT CAPOCCI:  I’ll try and be brief on this one because I could talk about my influence’s all day long.

I guess, if I really had to pinpoint who the main guys are that shaped my playing and pointed me in the right direction, it would be Johnny Guitar Watson, Dave Biller, Charlie Christian, Elmore James, TK Smith, Junior Watson, Deke Dickerson, Hollywood Fats, Merle Travis, Dan Nosovich, and Jimmie Vaughan & The Fabulous Thunderbirds. The T-birds and Jimmie are still a massive influence for me. I bought their first record “Girls Go Wild” when I was fifteen and it blew my mind. I couldn’t believe what I was hearing! I could say similar things about all the guys I’ve mentioned, though. They’ve all had a massive roll in the way I play my music today.

PONYBOY MAGAZINE:  Do you have a day job or is music your full-time profession?

PAT CAPOCCI:  Yes, I’m a barber. I work at Captain Sip Sops in the beach suburb of Manly. We’re one of two shops located on the East Coast of Australia, the other being in Noosa. I guess the concept of the store is a first, for Australia anyway. The Noosa store was the first shop to open, and then two years later expanded to Manly. We share the retail space with Thomas Surfboards and have a selection of shred sleds, clothing and apparel. For me, this is a dream job as it’s basically an extension of the lifestyle I already live.

PONYBOY MAGAZINE:  What plans do you have for the band and yourself in the upcoming future?

PAT CAPOCCI:  We’ve just released our fourth record and are about to start an East Coast tour of Australia to promote it. We’ll also be making a film clip for the title track Pantherburn Stomp over the next month, which should be super fun. We have a new 45’ coming out in four weeks, a firey little duet with the incredible Marlene Perez from The Rhythm Shakers. I’ve also started writing some new tunes for a possible on-line only release that I’m hoping to do with our good friends from Sweden, The Domestic Bumble Bees, while we’re in Scandinavia in December. That should be a fun tour. We’re just locking it in at the moment. It will be five countries in five days with the Bumblebees. Other than that, we practice, do gigs, work, record and repeat!

Thank you for your time and great pics, Ponyboy magazine!