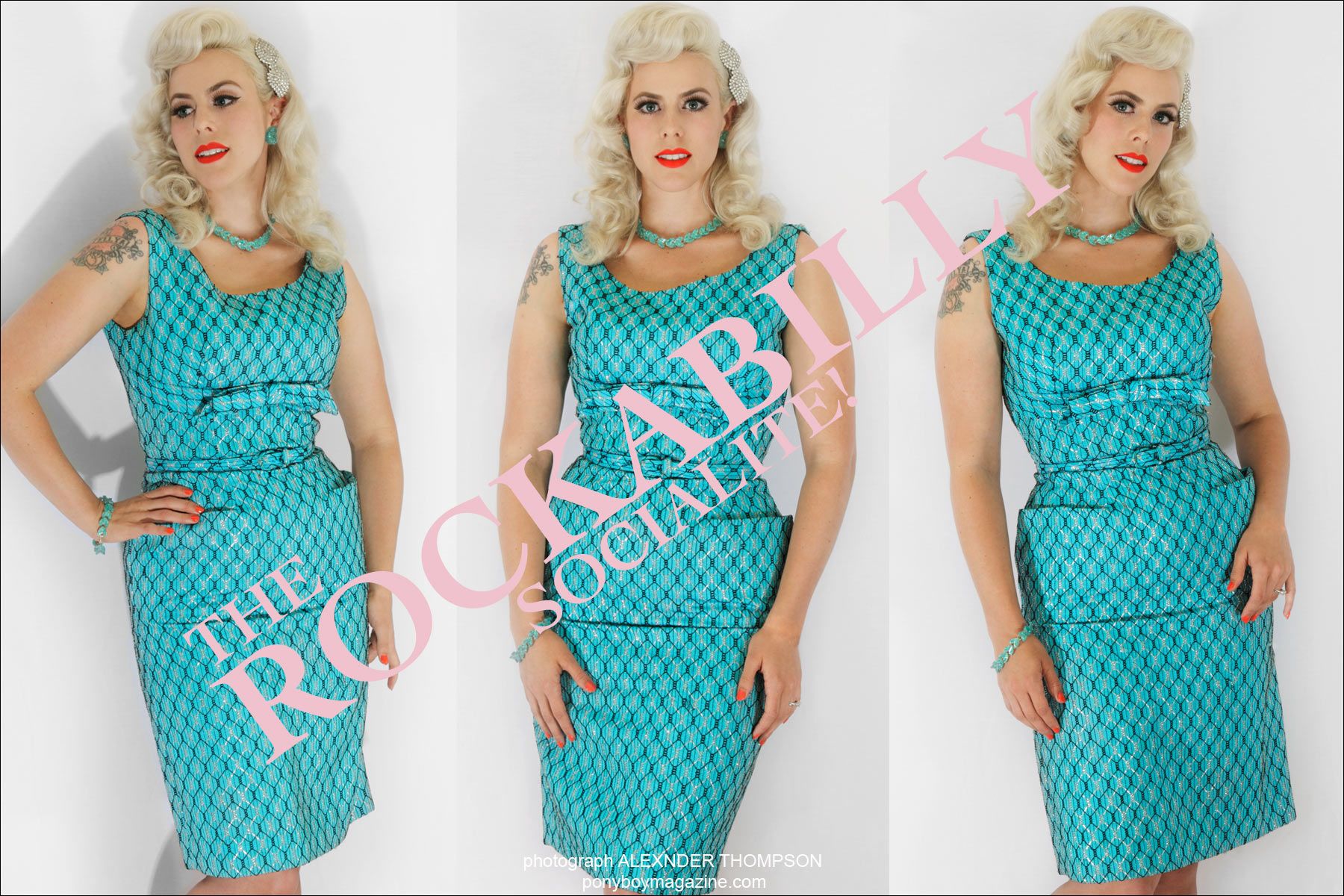 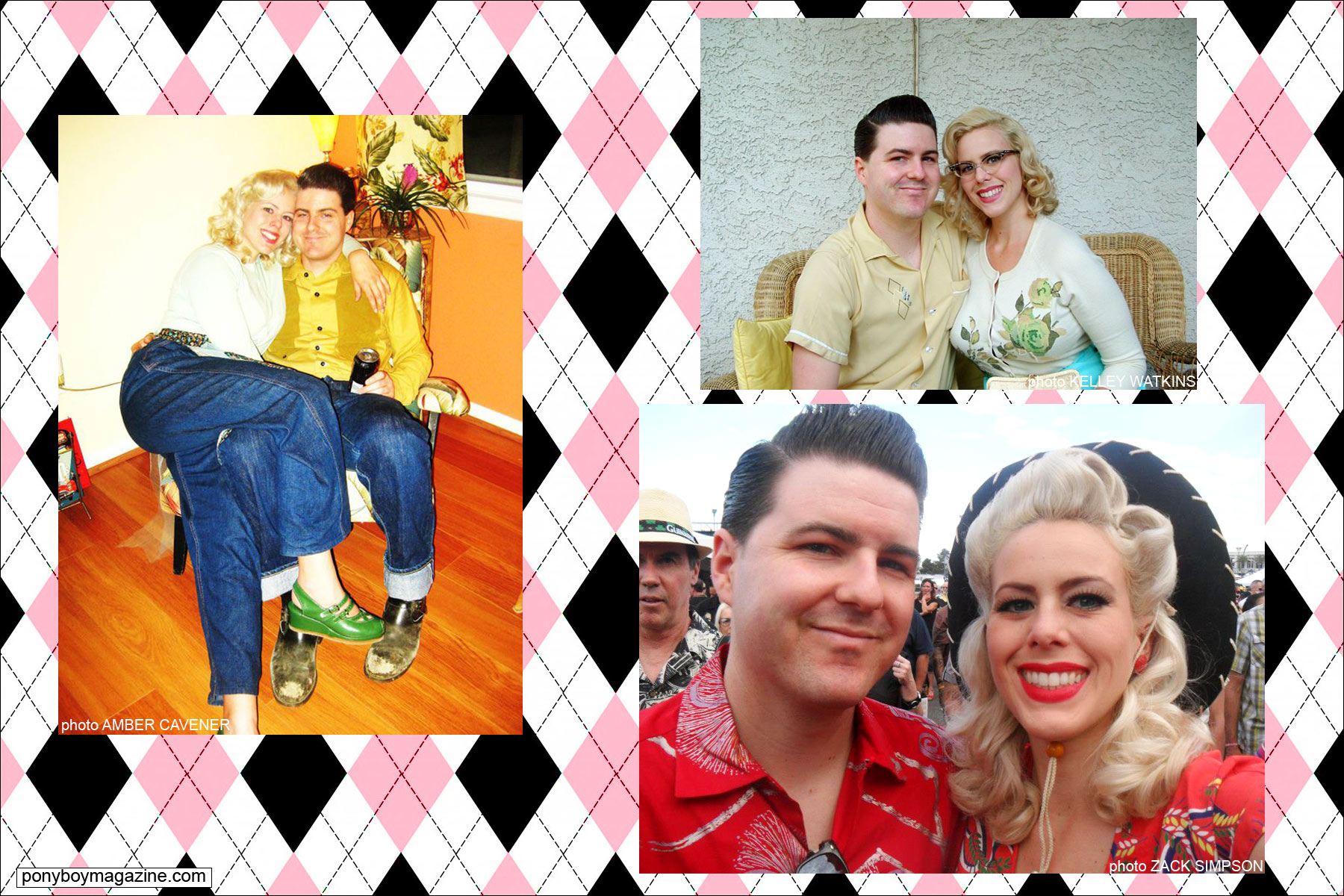 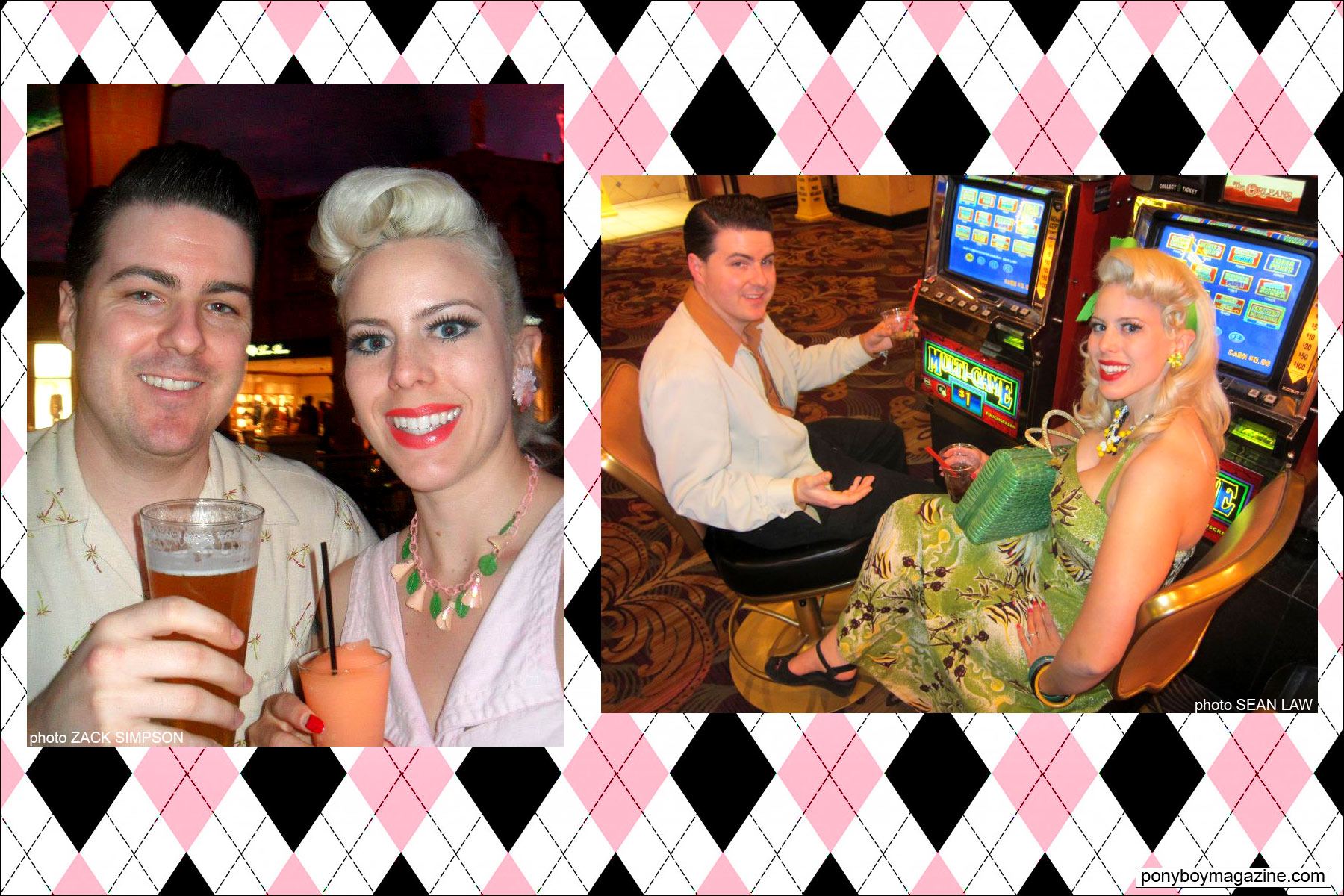 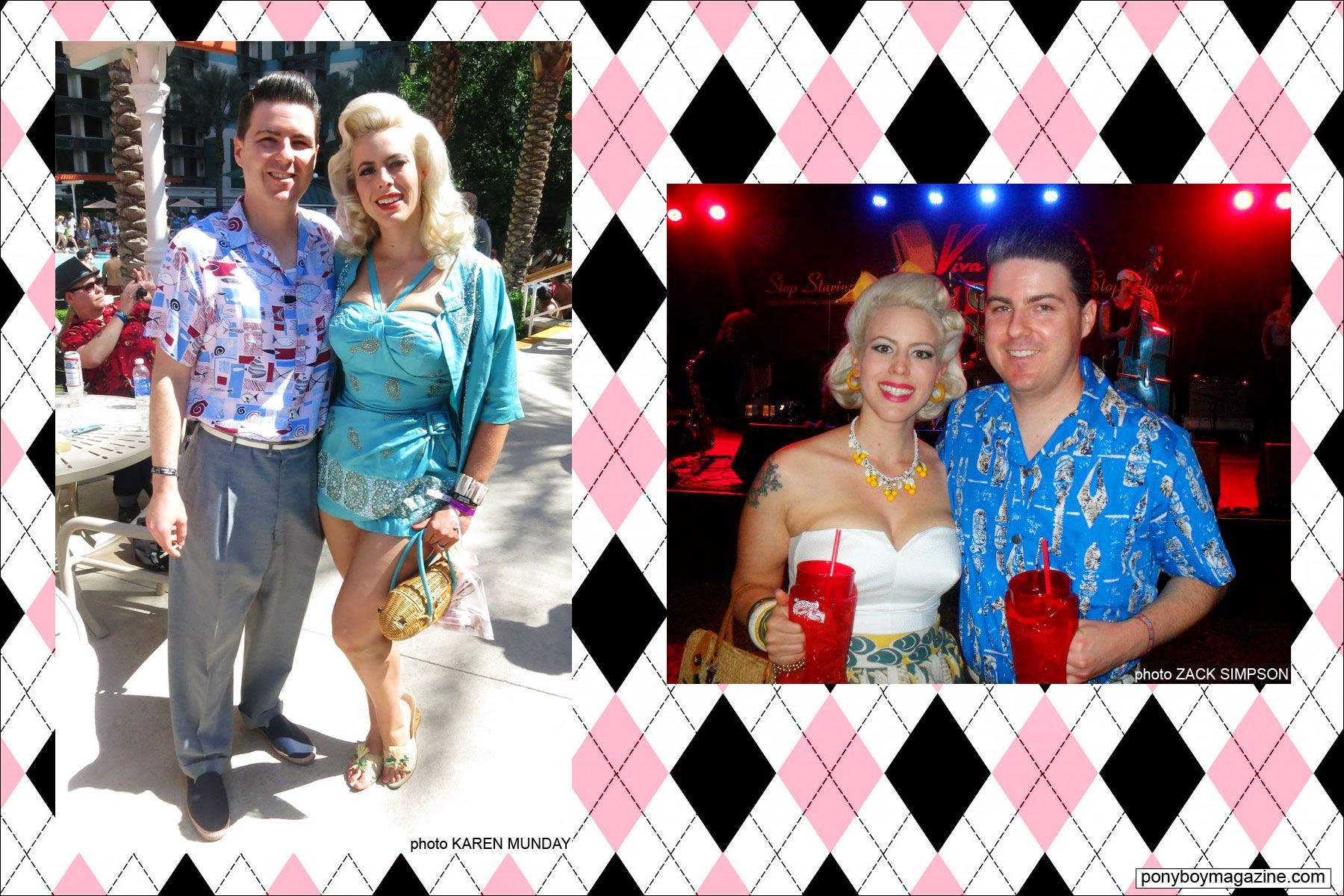 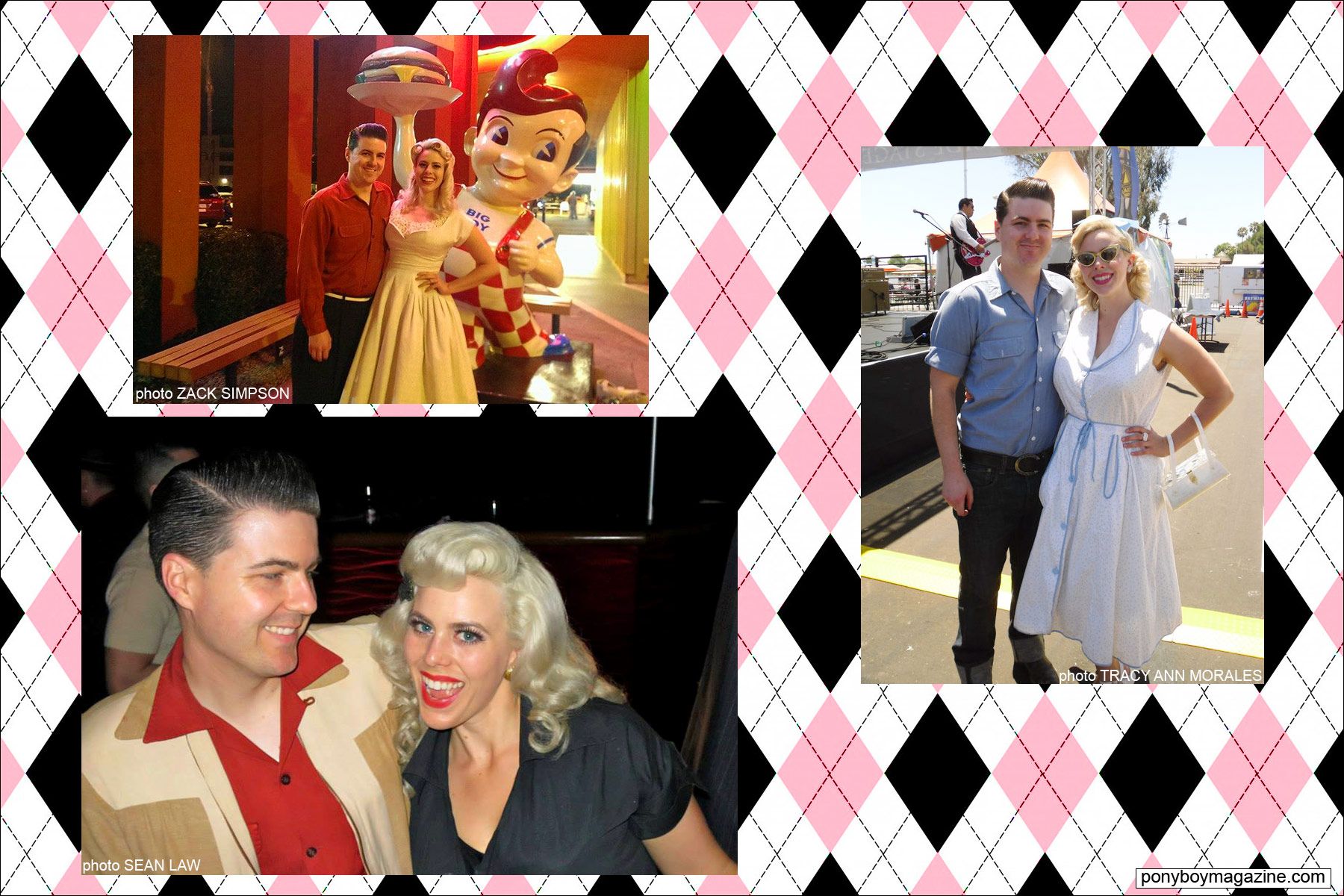 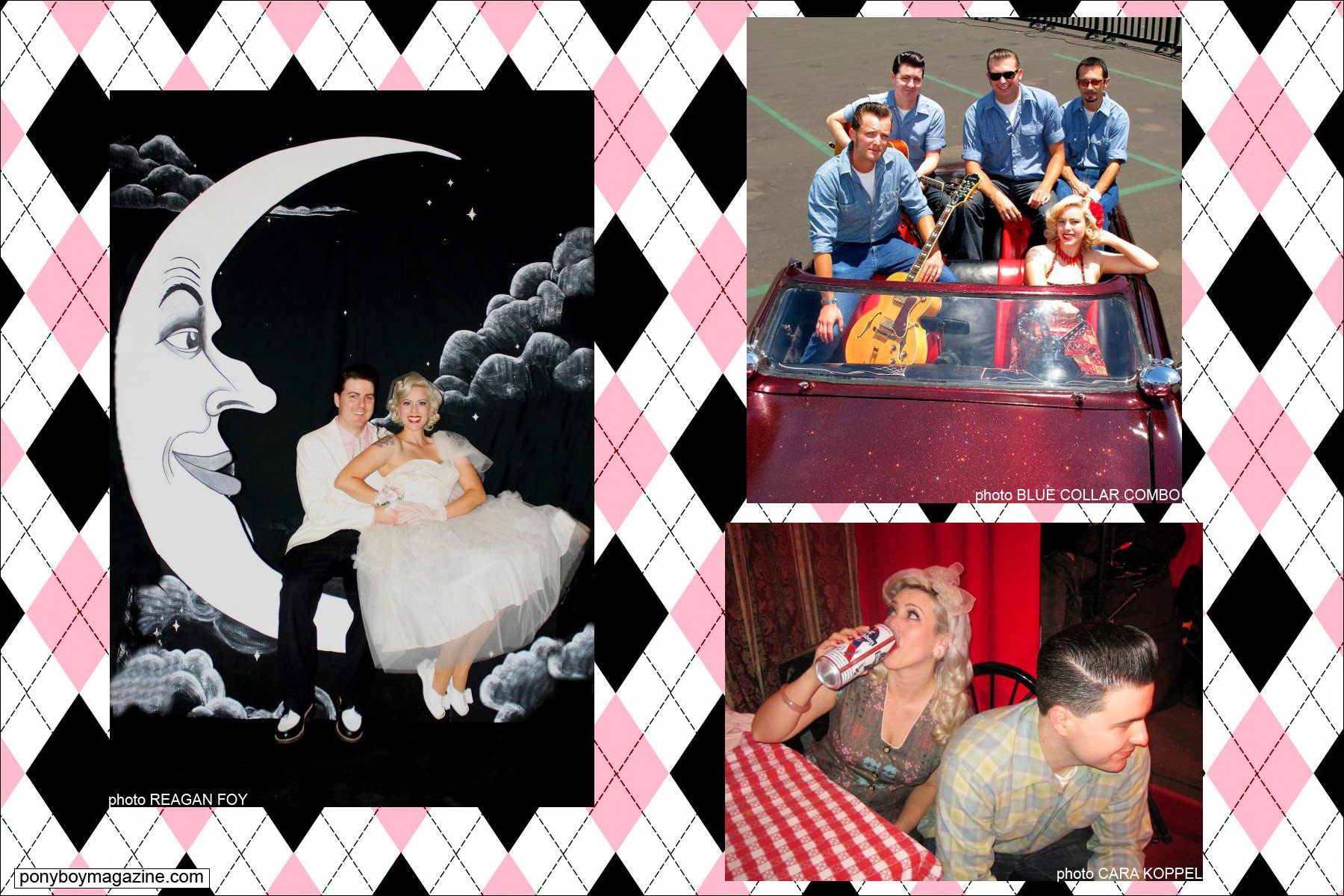 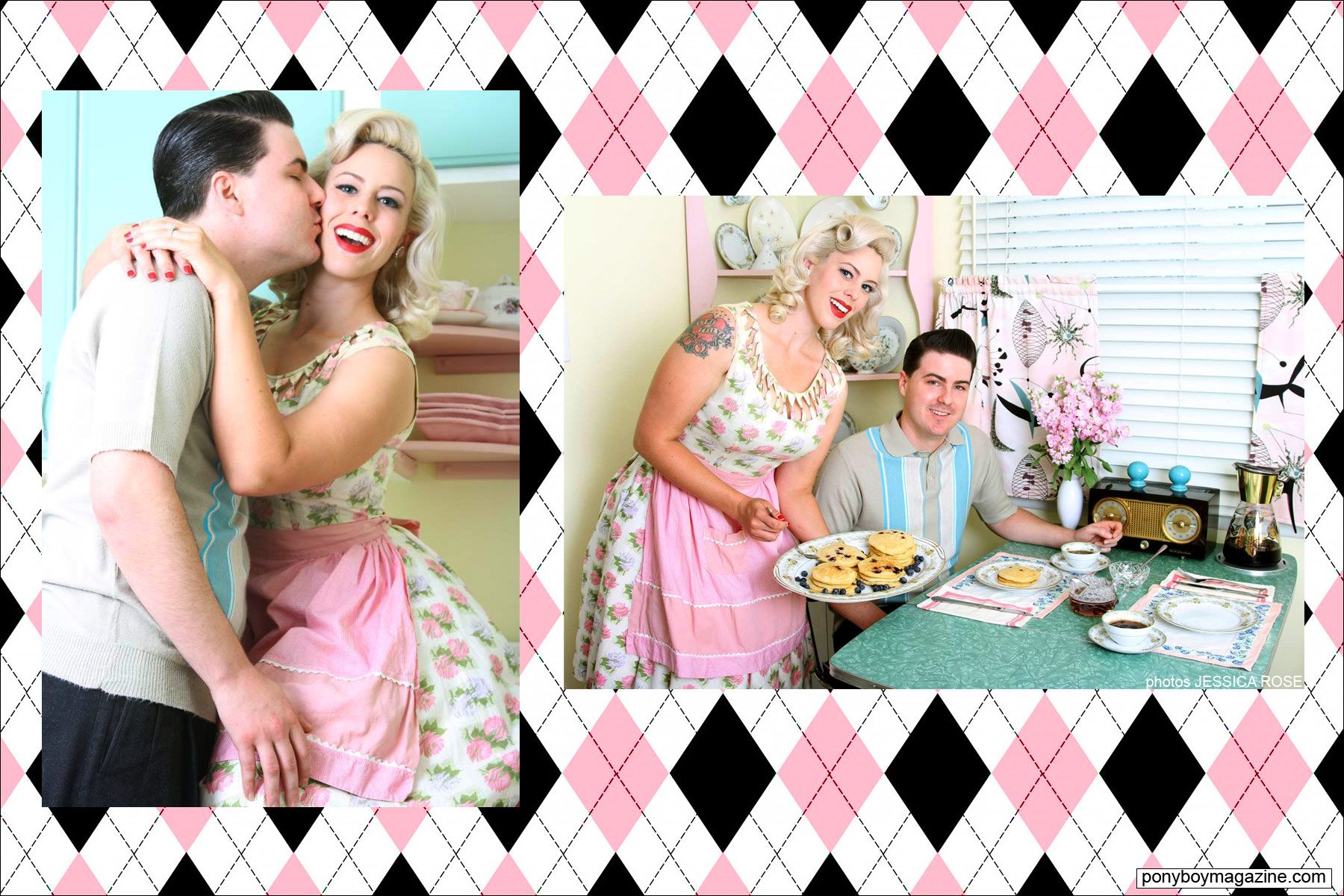 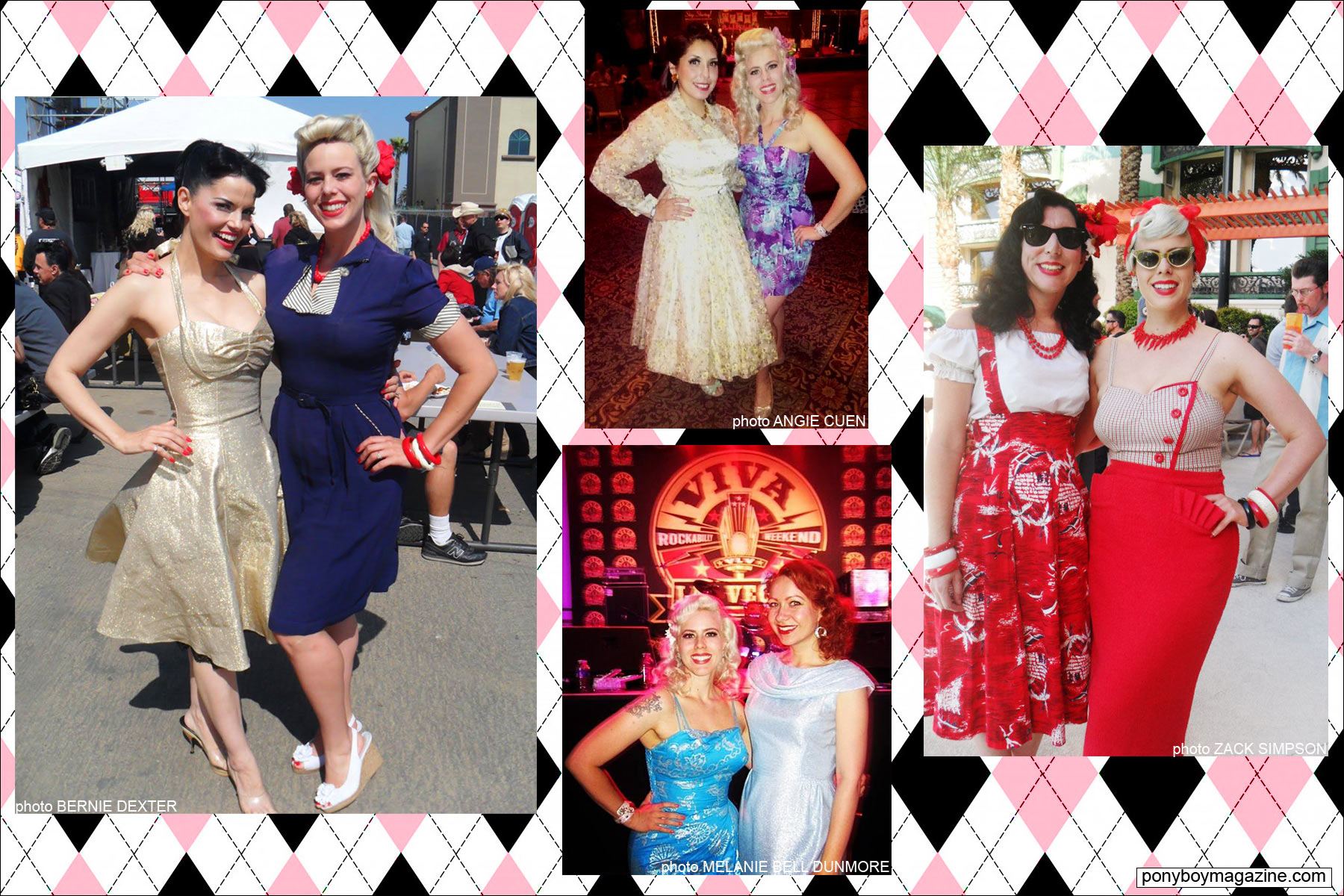 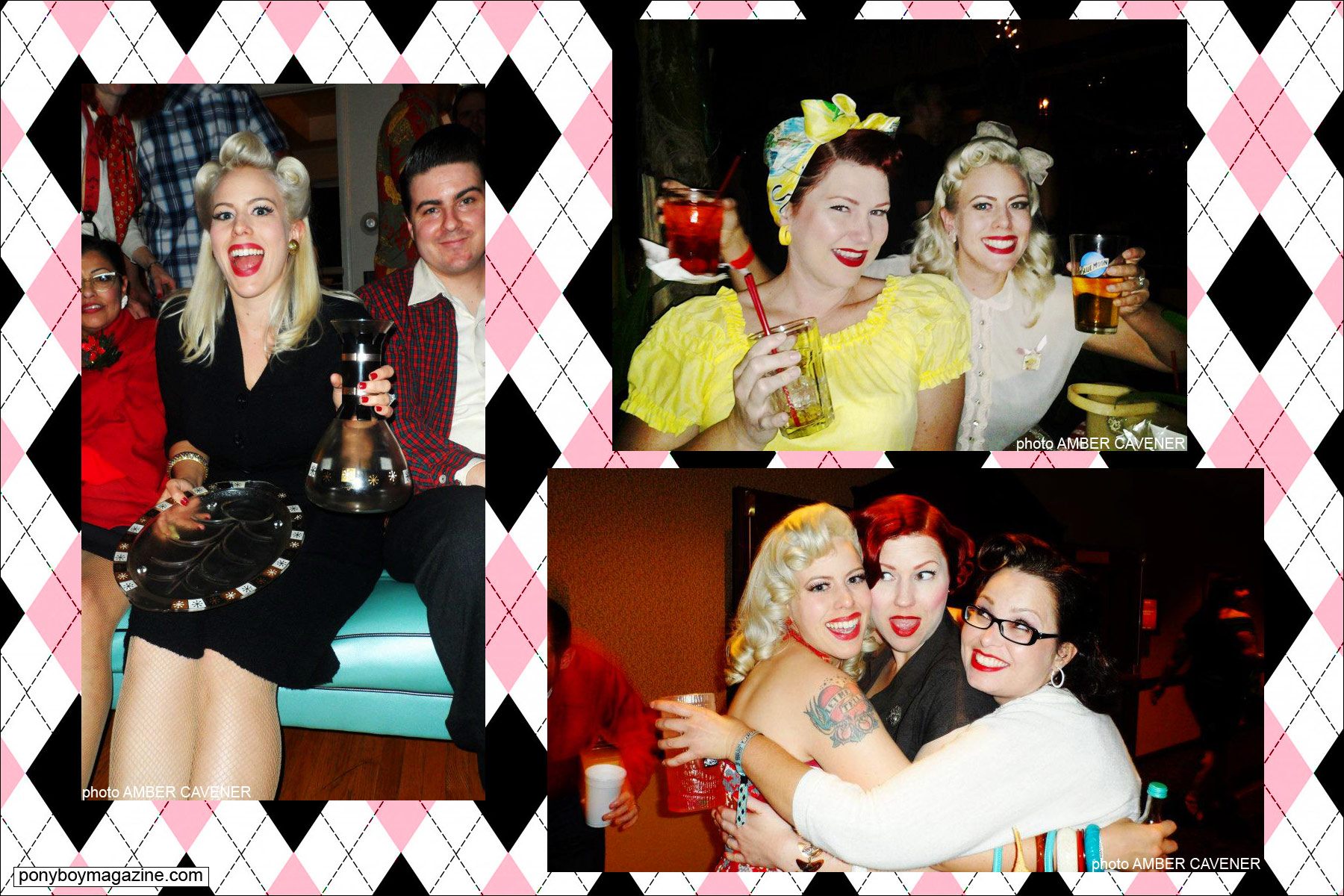 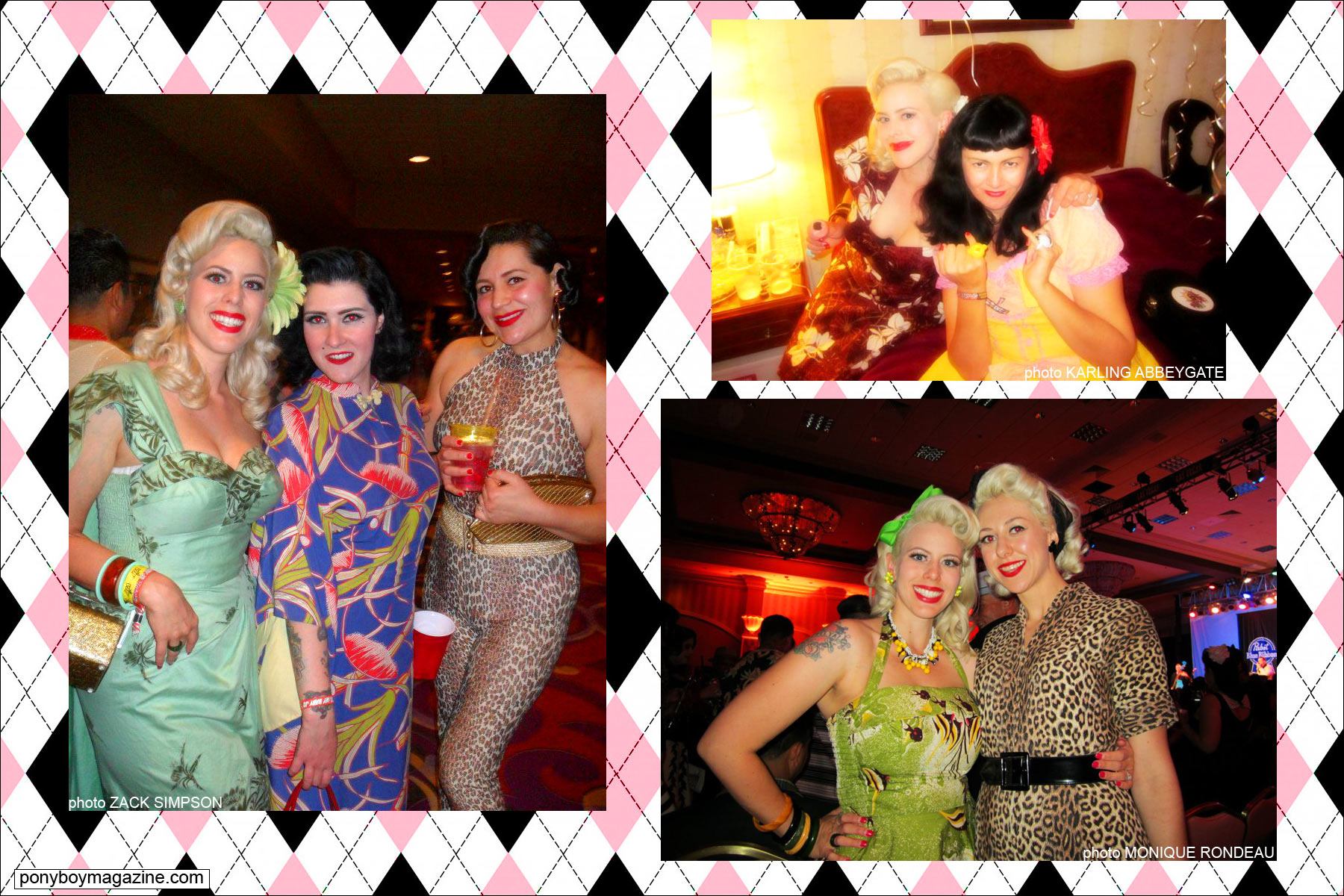 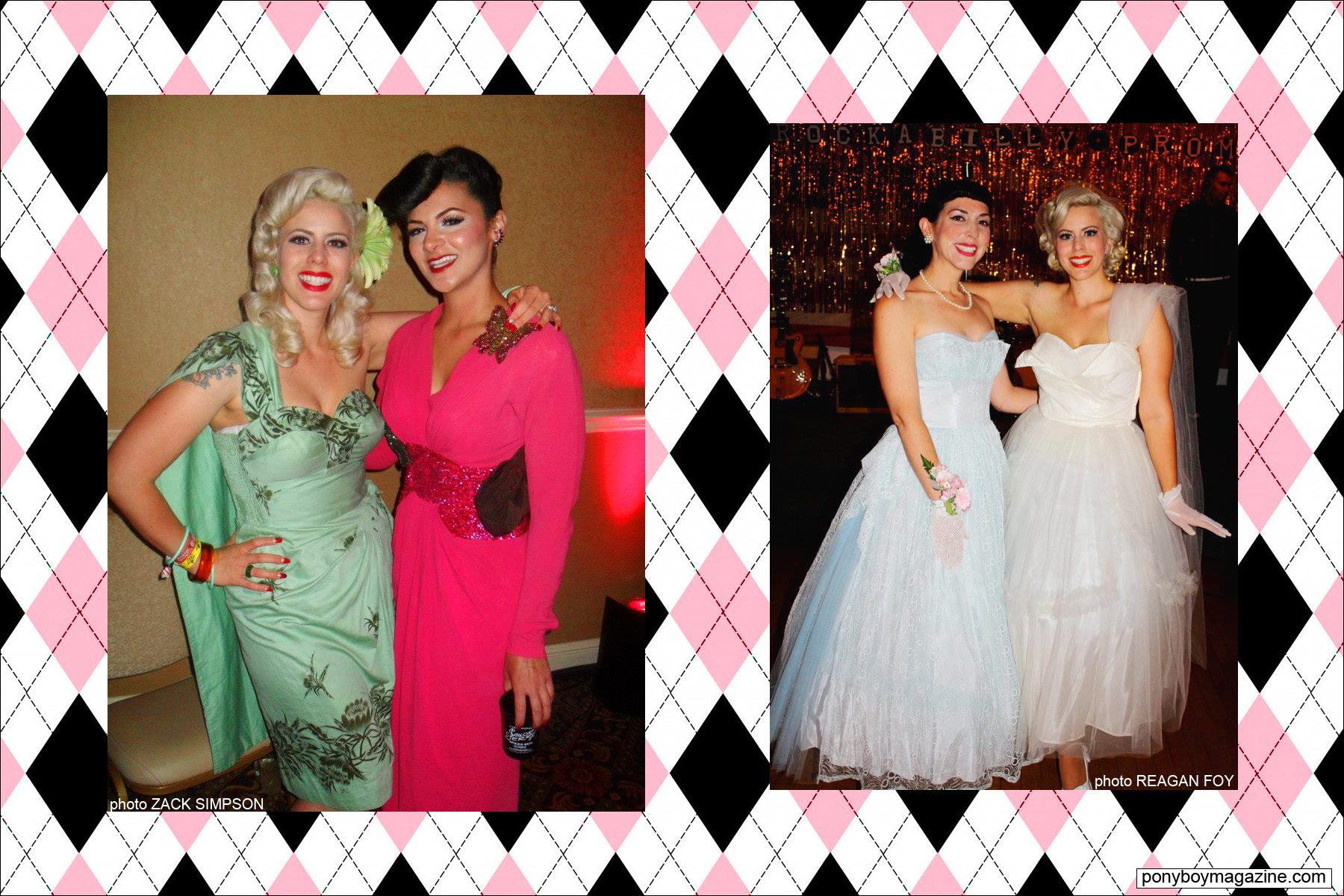 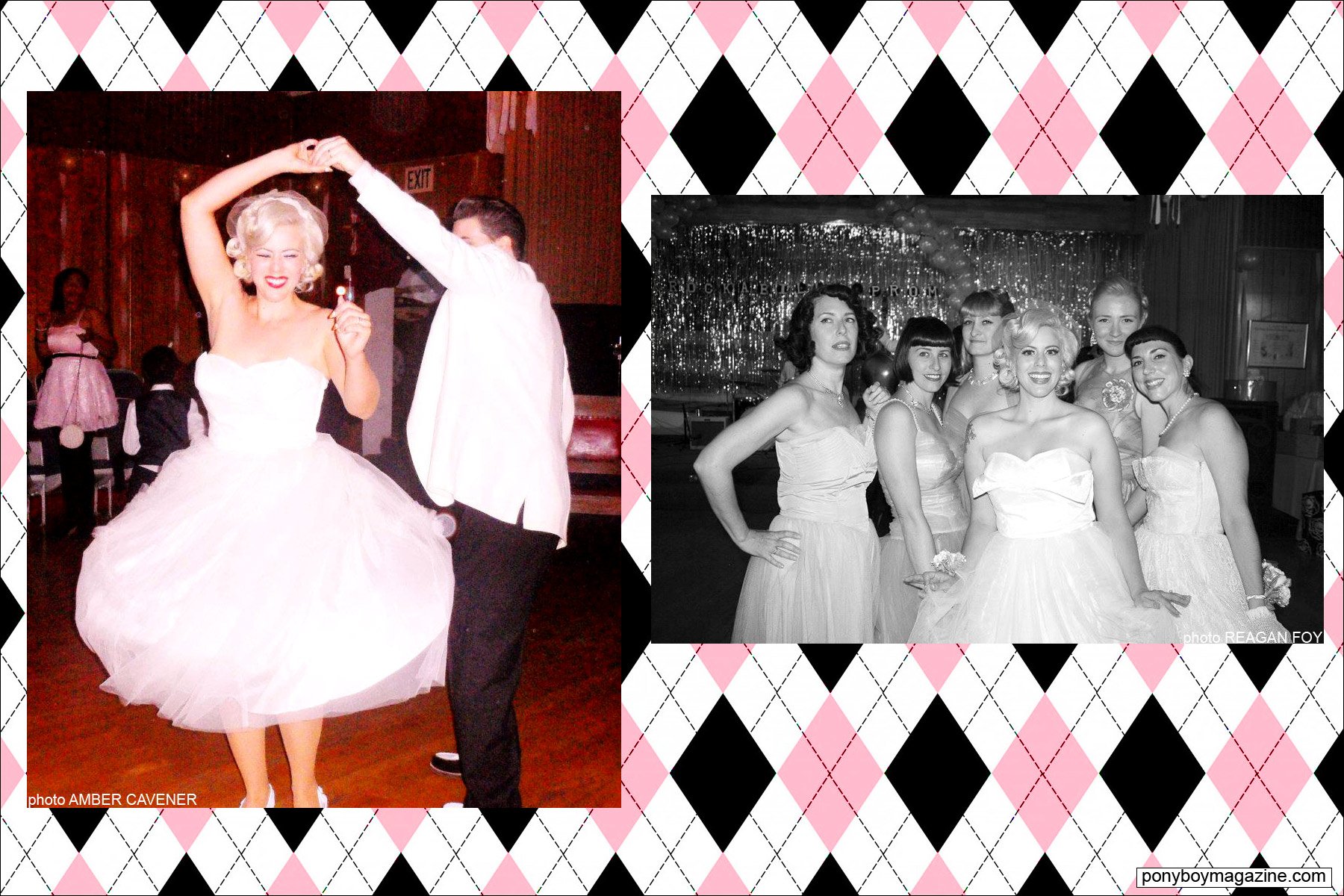 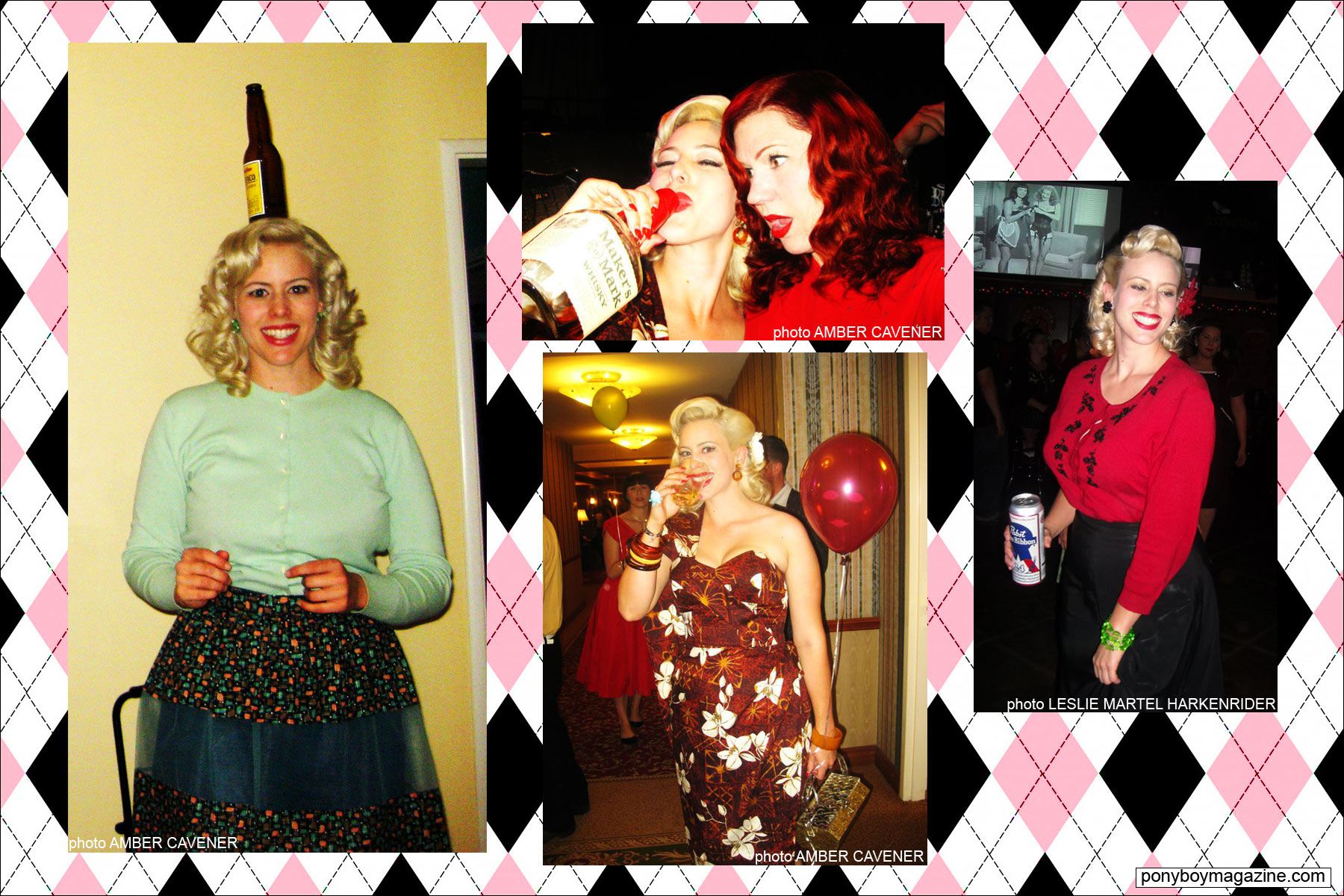 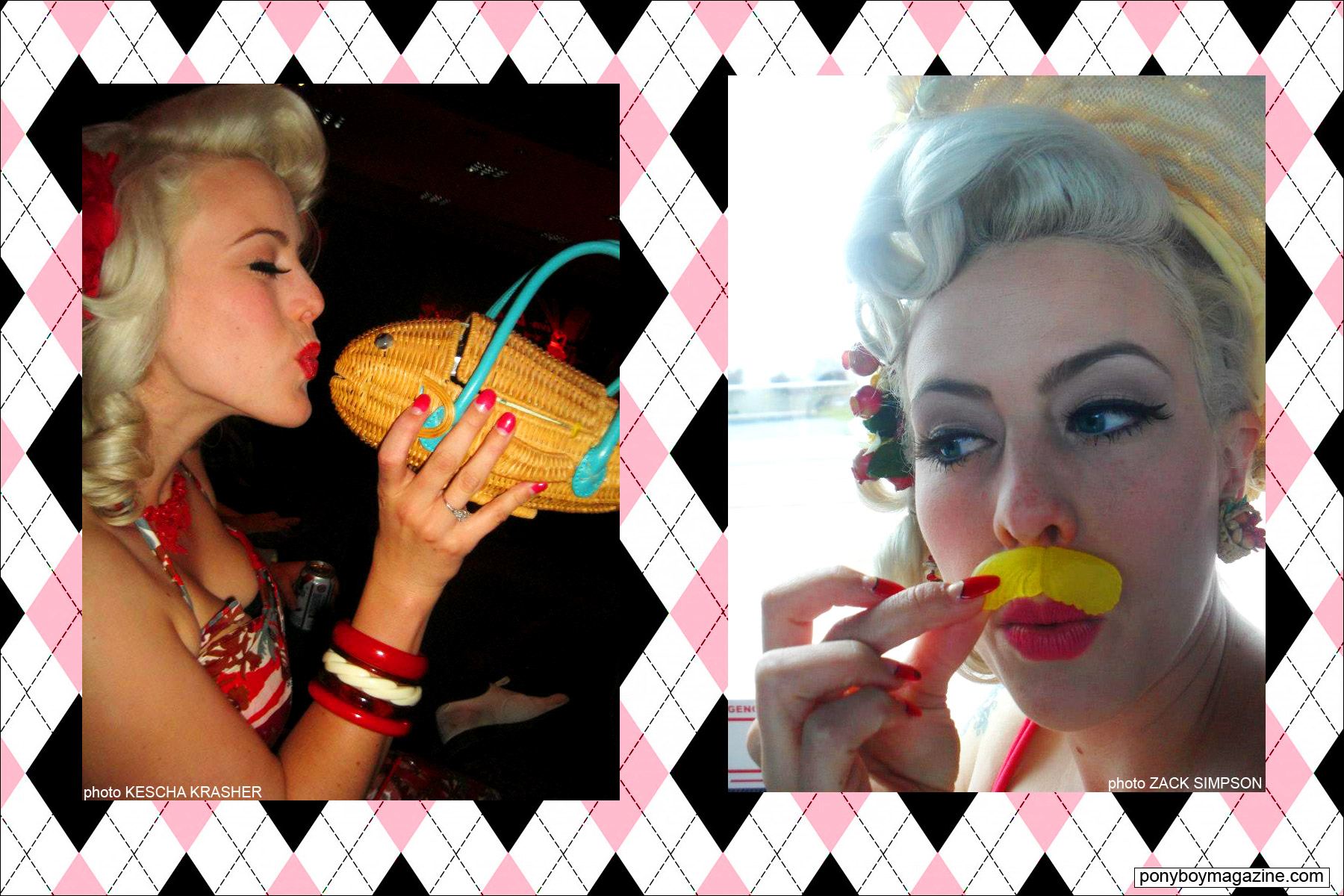 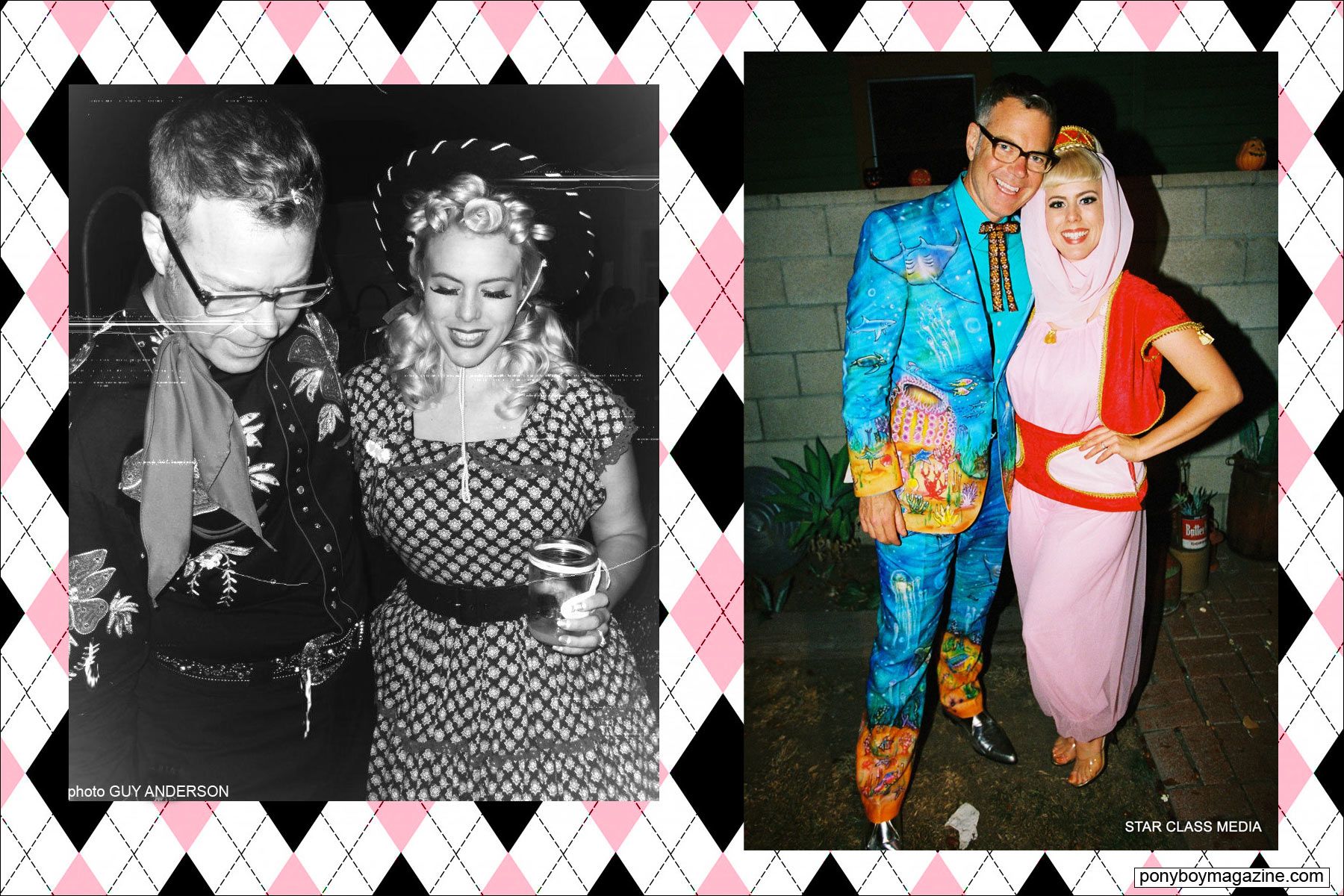 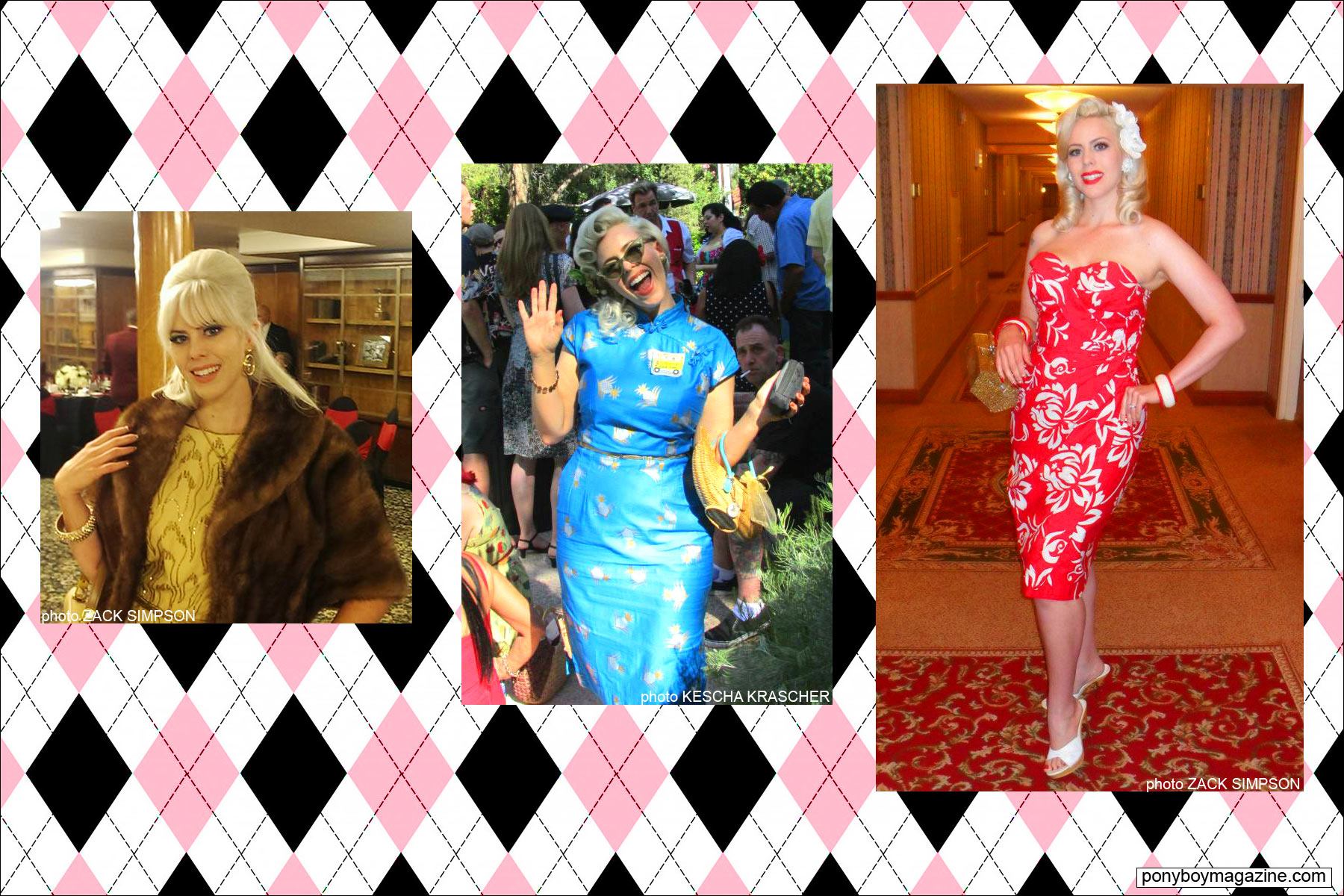 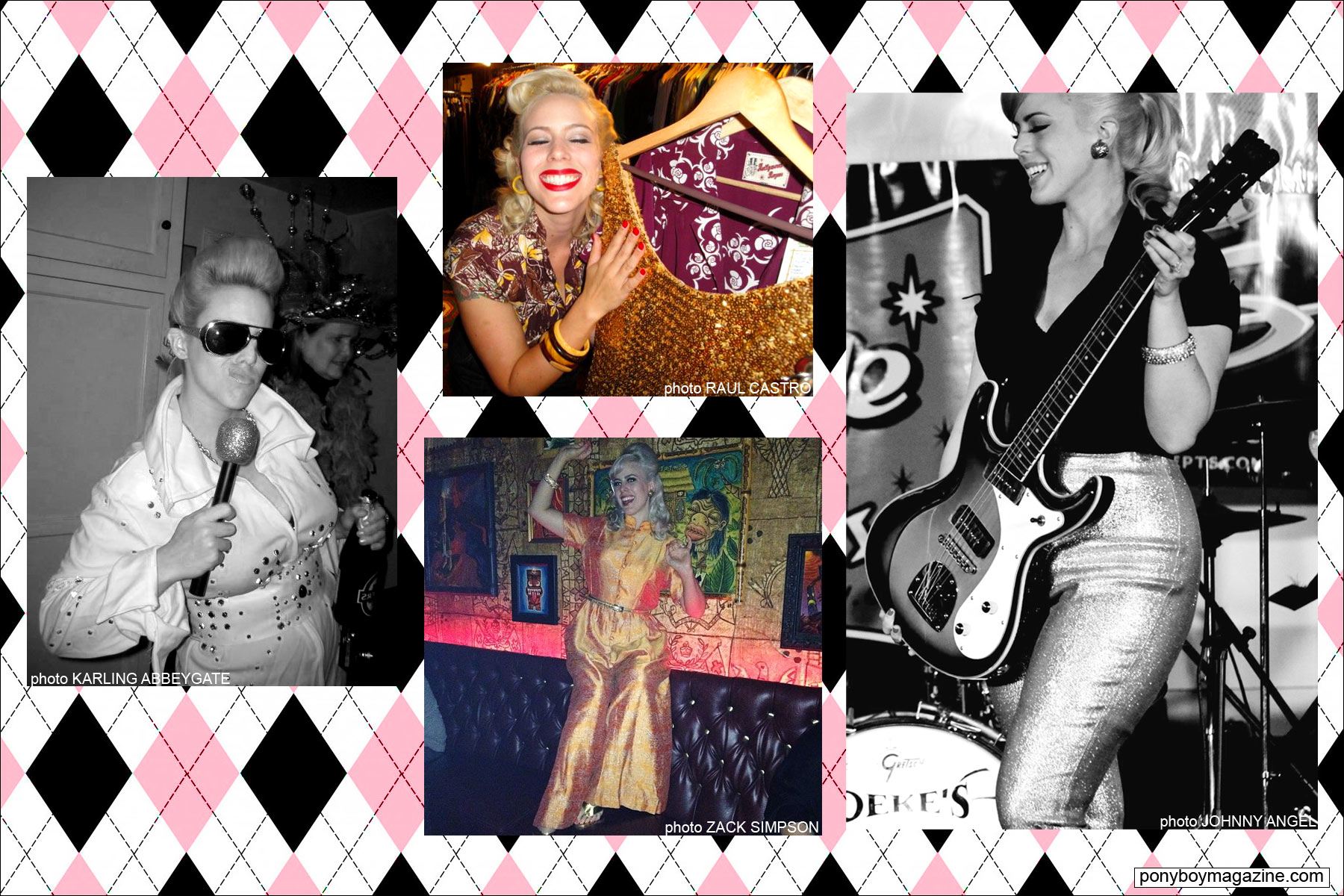 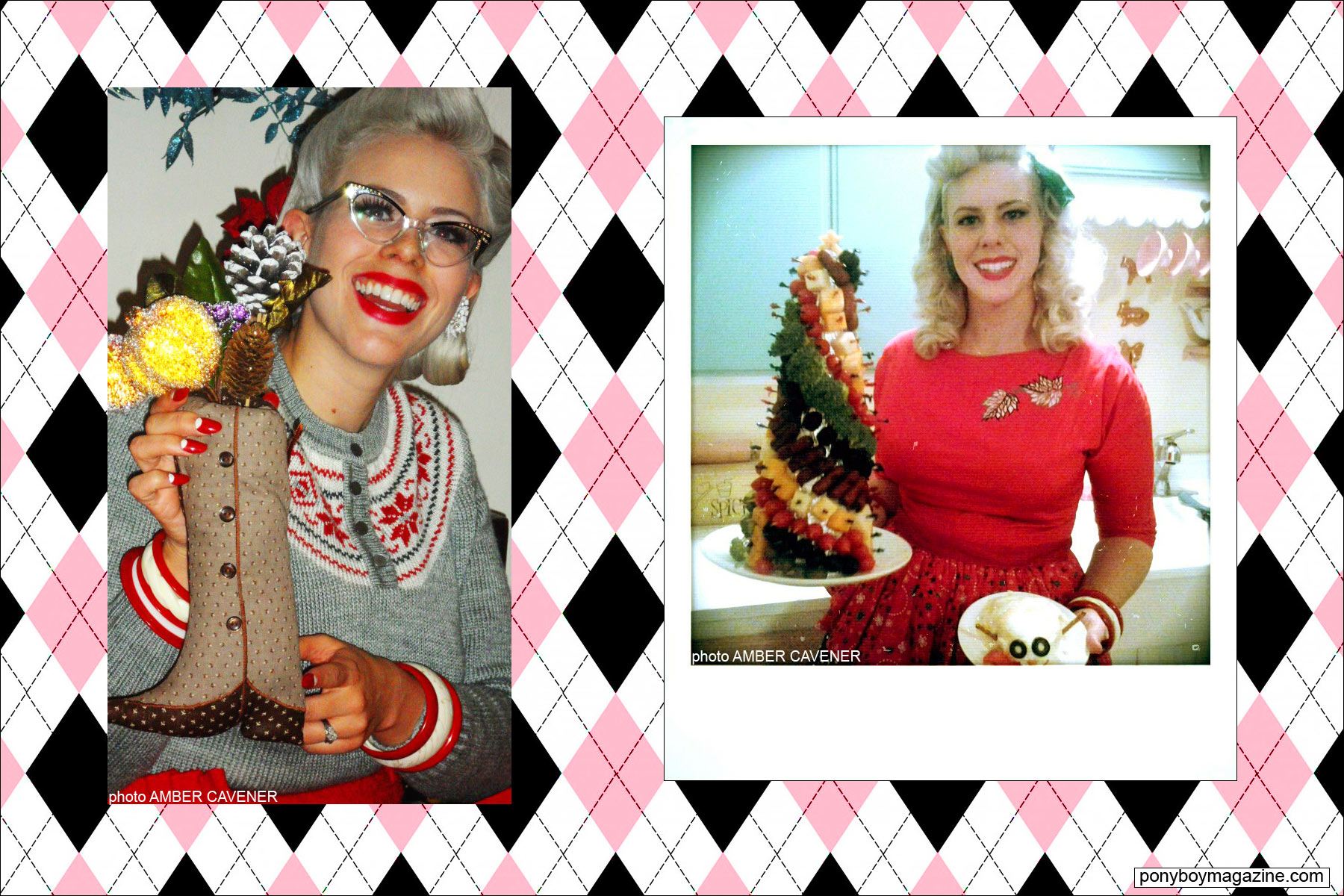 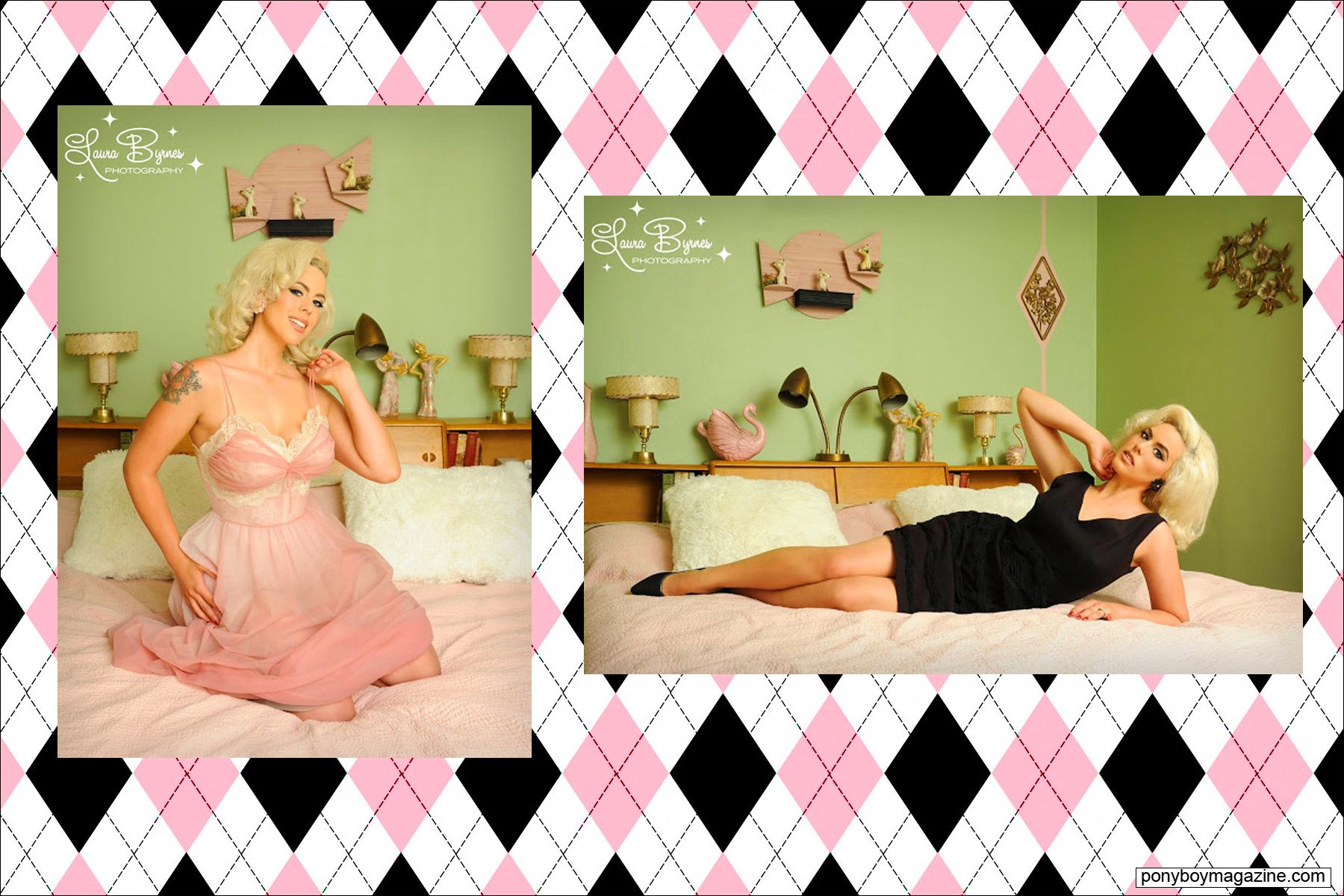 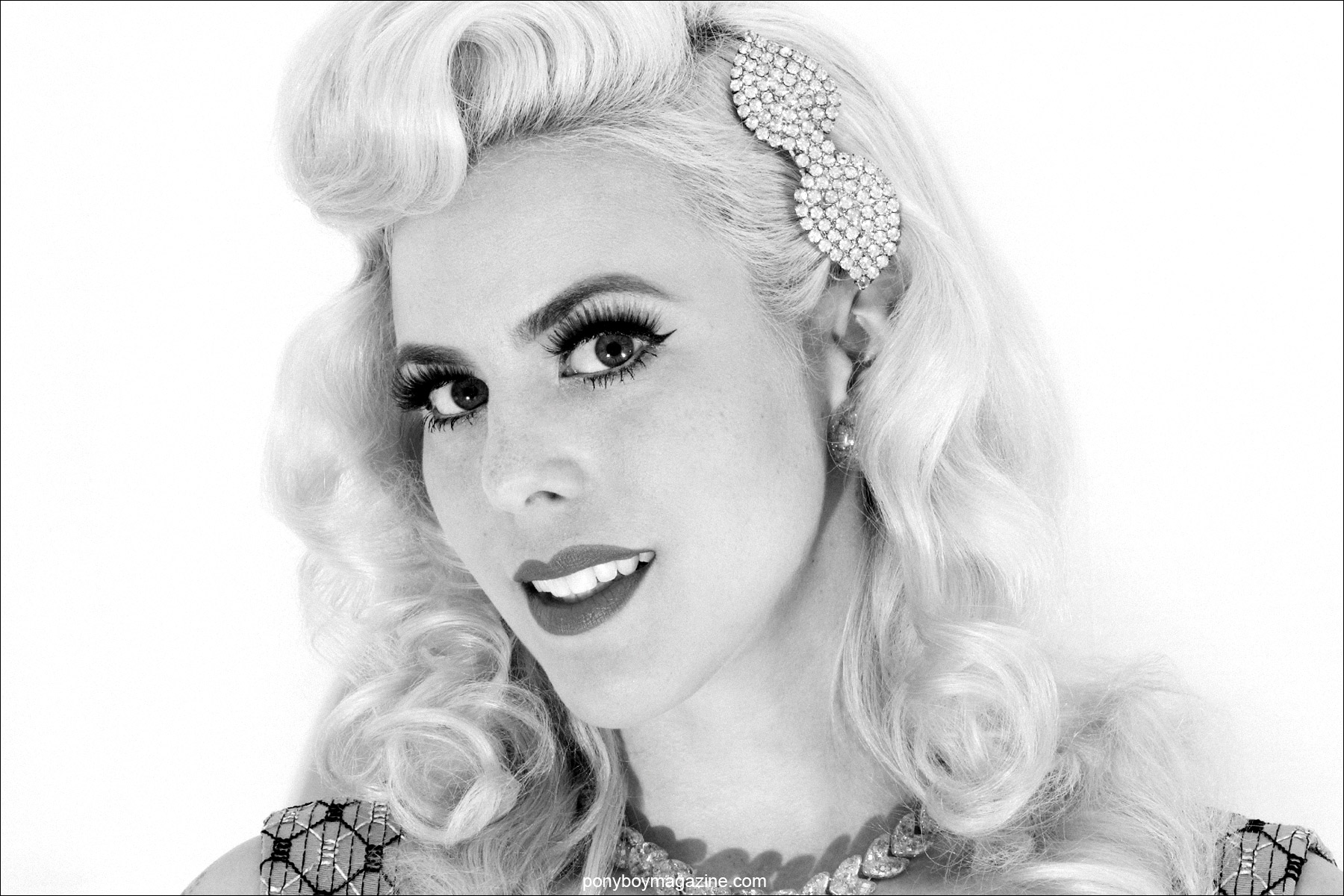 Dollie Deville. The blond and beautiful West Coast based 5o’s gal you see at most weekenders has the biggest smile and is always dressed head to toe in great vintage attire. In her highly popular website known as The Rockabilly Socialite, she offers tidbits to the world which range from vintage style tips to the best rockabilly bands. She recently expanded her site to include a men’s perspective from her husband and writer Zack Simpson, who is now known as The Rockabilly Gentleman. We caught up with Dollie to find out about her background, how she met Zack, and what she has in store for the future. Photos courtesy of Dollie Deville.

PONYBOY:  Dollie, please tell us your background. Where were you raised?

DOLLIE DEVILLE:  I was born and raised in Southern California. I’ve been here my whole life. I really am a California girl. I don’t think I could live anywhere else!

PONYBOY:  When did you first start getting into vintage 1950’s fashion and music?

DOLLIE DEVILLE:  I didn’t realize it until I was an adult, but I was influenced at a young age. I remember my grandma would play 50’s songs, specifically “Papa Loves Mambo” by Perry Como, to wake us up in the morning. My grandpa had wired speakers all around the house so you could hear it everywhere. My grandma grew up during the great depression, so she always taught me to treasure and care for what you have. And she did this with all of her vintage glasses and dishes. I also remember another family member having a 50’s Chevy, which he adored. I wore a vintage dress to my 8th grade dance and recall being happy that I was unique. I really starting getting into it as a lifestyle after meeting my husband Zack. He took me on dates to Bob’s Big Boy in his ’55 Ford Fairlane. Those were great times!

PONYBOY: How and when did your successful blog “The Rockabilly Socialite” come about?

DOLLIE DEVILLE:   I actually started the website at a recommendation from a fellow rockabilly blogger. I never thought my life was unique or interesting until someone pointed it out. Then I realized that it might be a great way to get involved in the rockabilly “scene” and help support the music, especially since I am not a musician. I think it started about five years ago and has grown beyond my wildest dreams. It’s actually the #1 rockabilly blog on Google now!

PONYBOY:  We love the site. It is definitely knowledgeable for both insiders and outsiders of rockabilly culture. Where does the inspiration come from for your site?

DOLLIE DEVILLE:  I hardly even need inspiration really. I just write about what I do, what I want to do, or about the things I like. They say “do what you love” and that’s really the case with my site. I never run out of things to talk about. Instead, I run out of time to write it all!

PONYBOY:   How would you describe your personal style now?

DOLLIE DEVILLE:  My moto is “live colorfully”! I love colors and prints. I wear way too many accessories and a bow much too often. But, that’s how I like it!

PONYBOY:   Tell us about the controversial “Wives with Beehives” pilot that you were heavily featured in. That’s how we first became aware of you.

DOLLIE DEVILLE:  I don’t really know what to say that hasn’t already been said a hundred times. Basically, it was pitched like it was going to be a cool show, but in the end Hollywood just ruined it like they always do. It turned into “The Real Housewife’s of Vintage”. It was a great disappointment. It’s probably the thing I am most embarrassed about in my life thus far. However, I have come to peace with it. Nothing keeps me up at night.

PONYBOY:  How and when did you meet your husband Zack Simpson?

DOLLIE DEVILLE:   I met him in 2005 at a pet store he used to work at. I used to go in just to see if he was working. I didn’t even have a pet! I didn’t know his name, so I called him the “pet store boy” when I mentioned him to my family. We joke that I gave him a “forever home” like he was the pet I rescued. I was only seventeen at the time, and never thought I would meet my future husband at a pet store, but life is funny like that. The first thing he ever said to me was that I was rockabilly and I didn’t even know it yet. Boy, was he right!

PONYBOY:  Tell us about his band The Outta Sites.

DOLLIE DEVILLE:  The Outta Sites are the 60’s Mersey beat band he formed with Chris “Sugarballs” Sprague, Pete Curry (both of Los Straitjackets) and Jason Eoff. I love this band because there is no one out there doing exactly what they are doing. I see so many of the same types of bands all of the time, so it’s great to see something so fresh and unique to change it up. Each of the members are insanely talented, and they have great chemistry on stage. They ‘re really a pleasure to see play. The guys are all really nice and even let me travel with them. I have gotten to go to so many new places. I even got to tag along to New England where they played The New England Shake-Up this past weekend. And they will be playing Spain in February for The Rockin’ Race Jamboree. My husband works so hard on his music while also working full time. And I couldn’t be more proud of him!

PONYBOY:  You recently added Zack as The Rockabilly Gentleman on your site. That’s a great idea. What brought that about?

DOLLIE DEVILLE:  Necessity, really. I needed help. He has always been my right hand in the past, so it just made sense. I trust him more than anyone. He is a creative writer, knowledgeable of the music from the inside, and he knows his fair share about fashion. He was just the perfect fit. I am enjoying working on the site more now that he is on board. We also get to have dates disguised as meetings, which is fun.

PONBOY:  What do you have in store for yourself in the future?

DOLLIE DEVILLE:  Who knows! I am kind of up for anything. Zack and I have big plans for the site in the next few years. I am just starting a cookbook that I want to self-publish by the end of next year. I am also in talks with a clothing company to guest design a line for them. Hopefully it all works out!