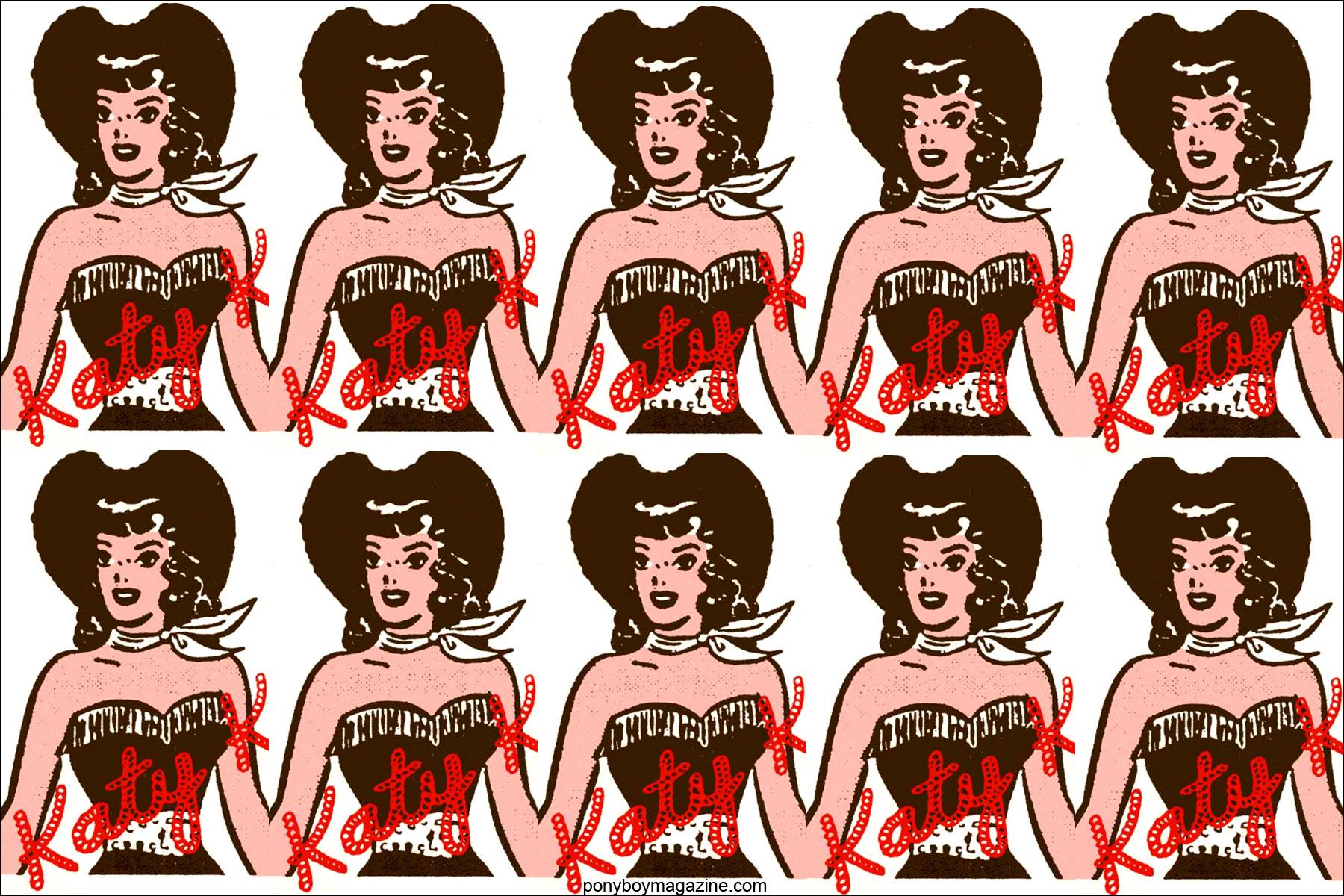 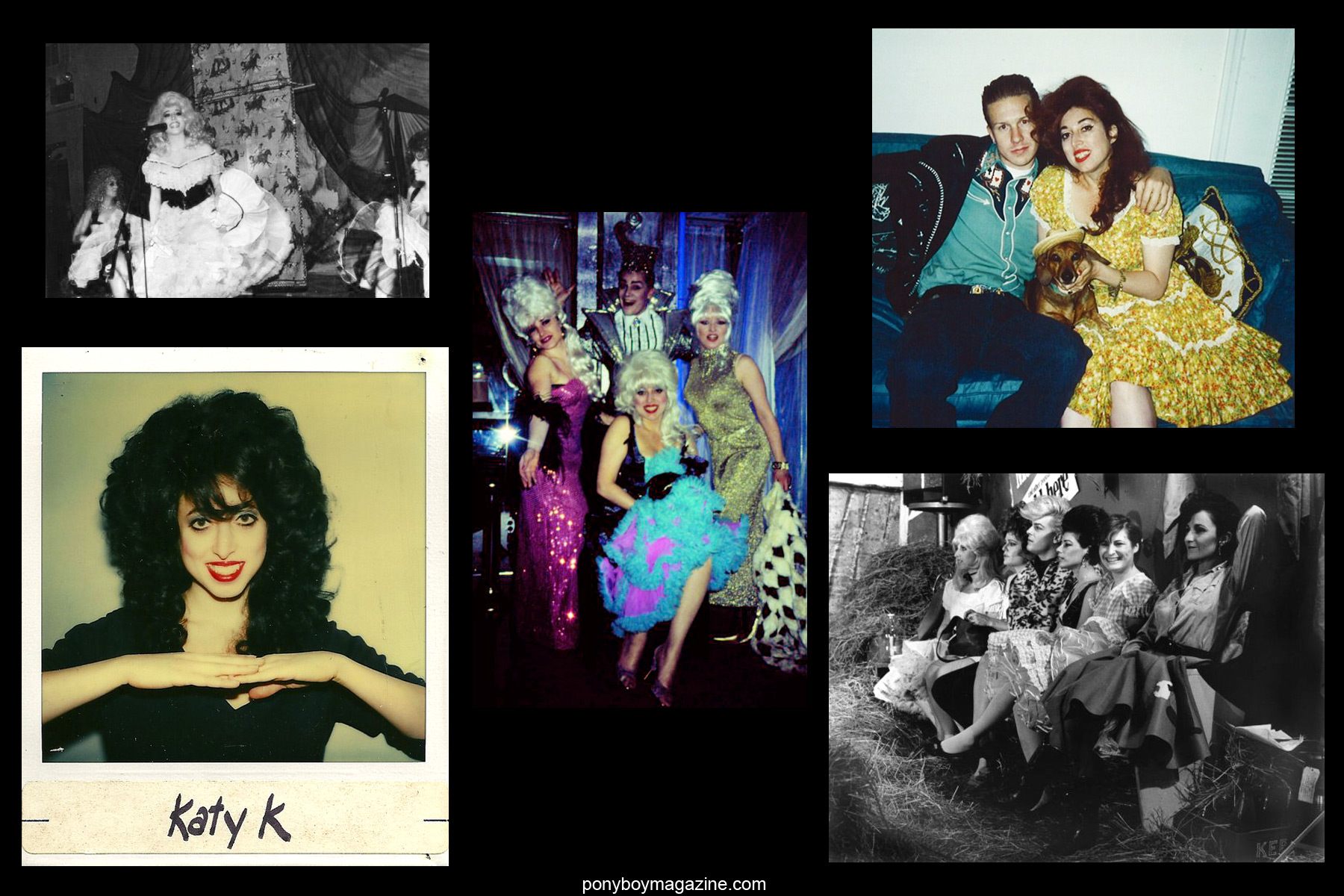 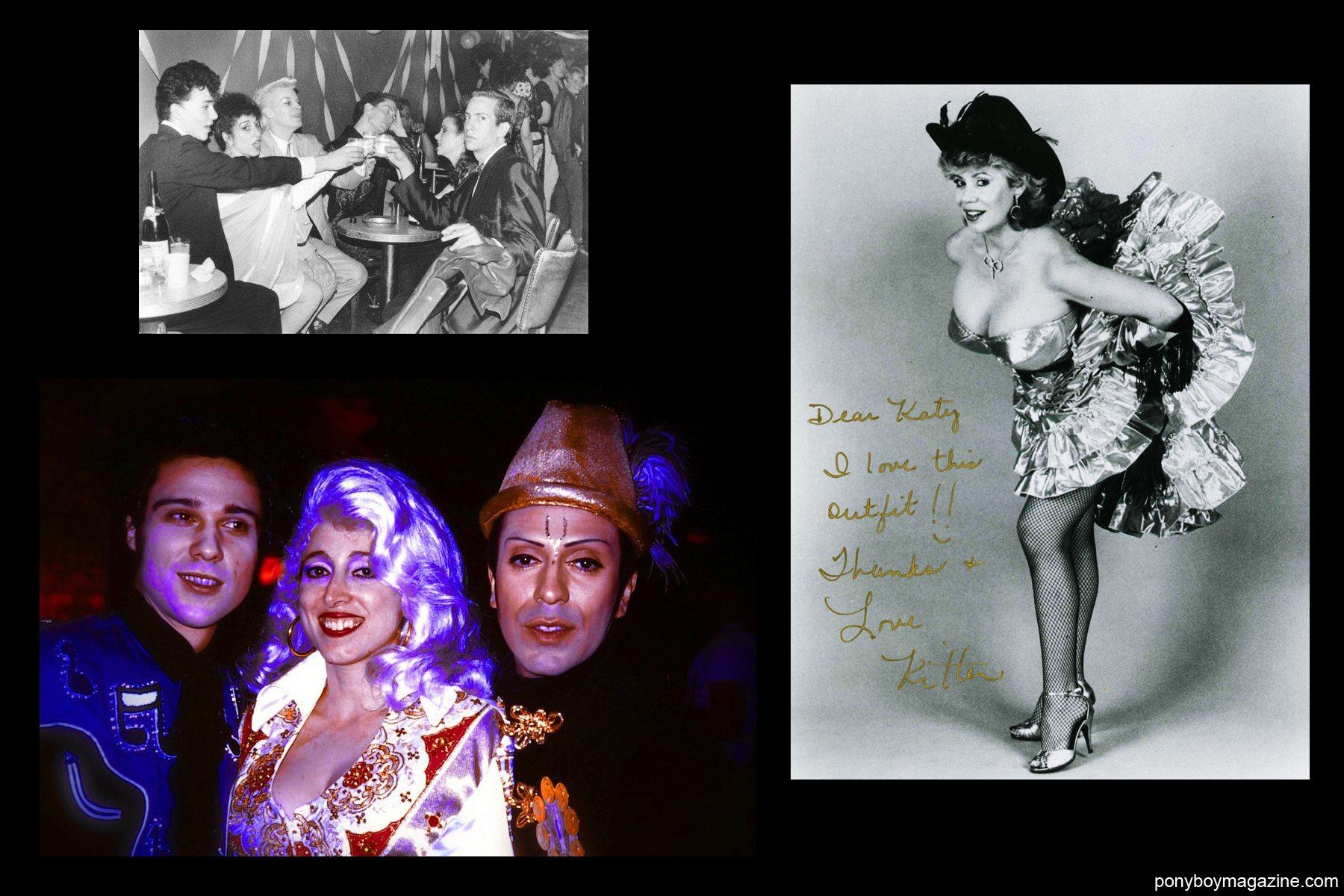 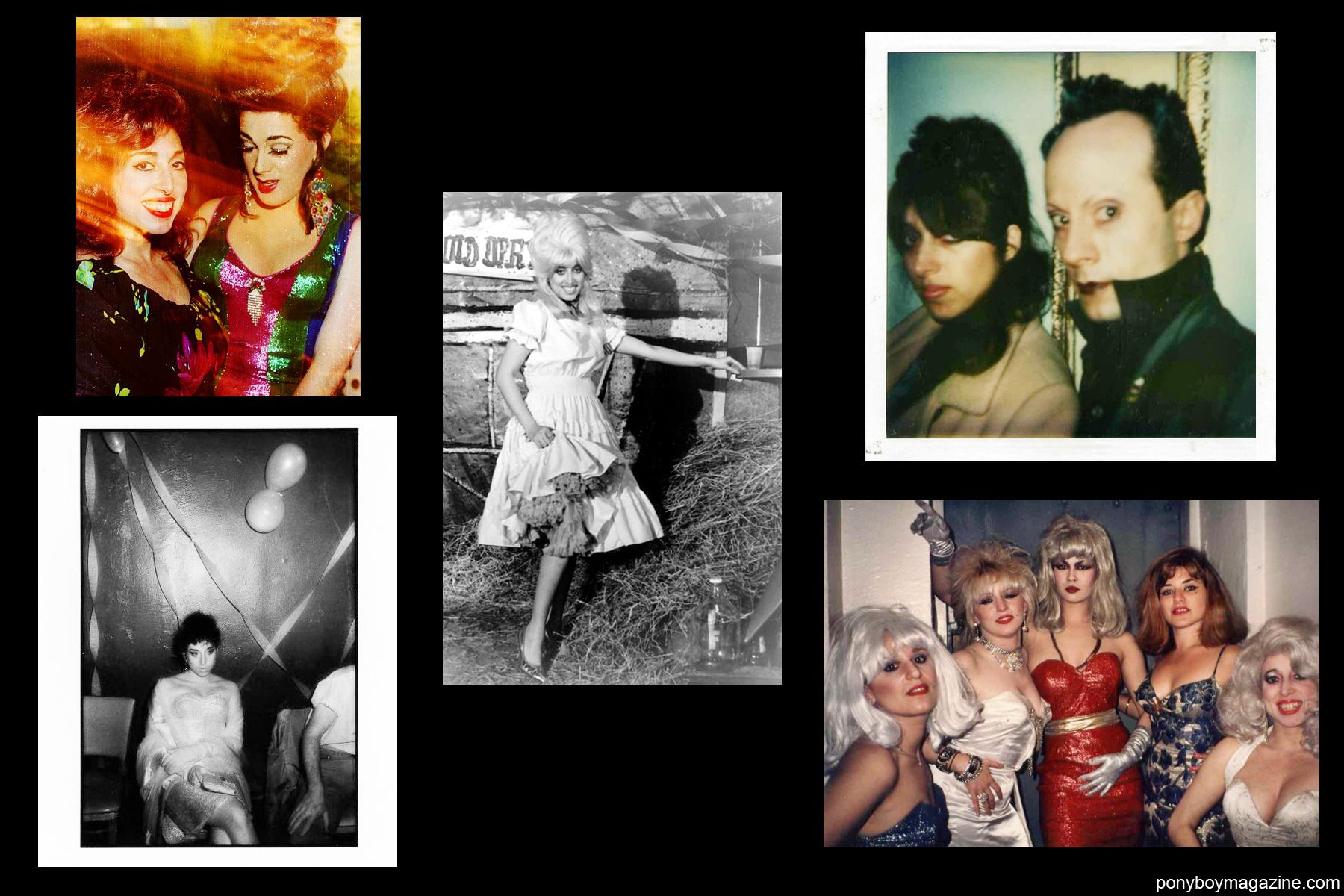 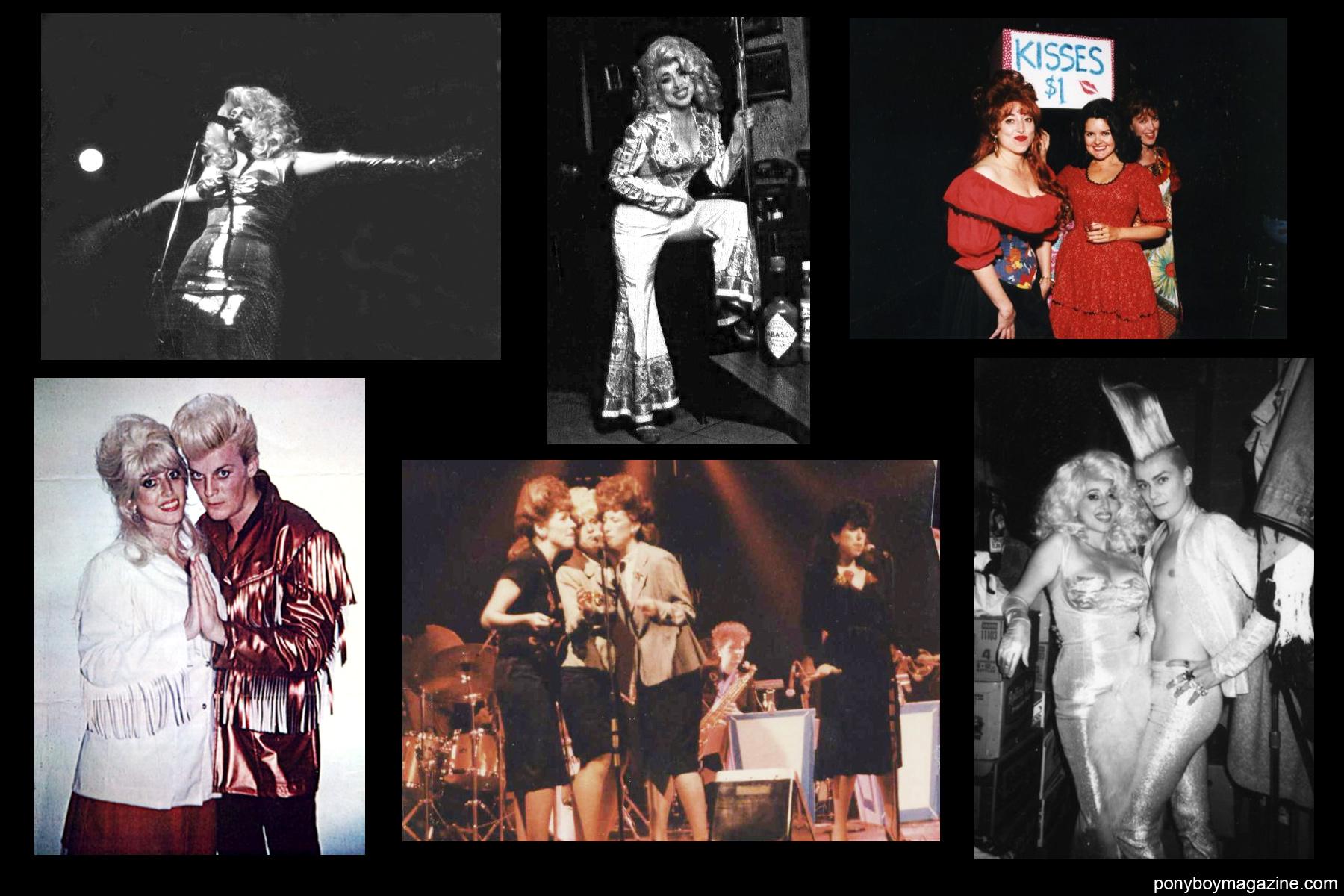 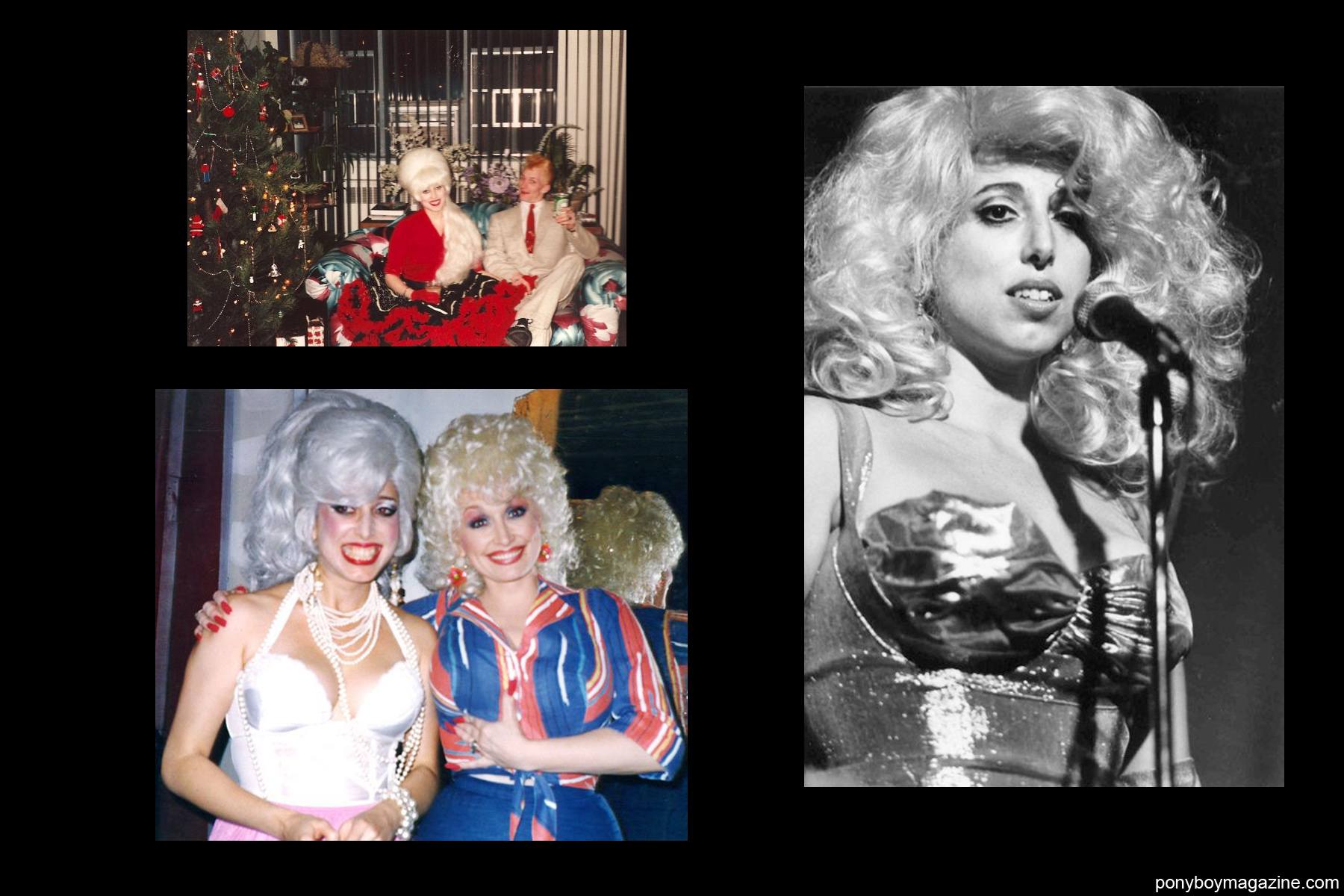 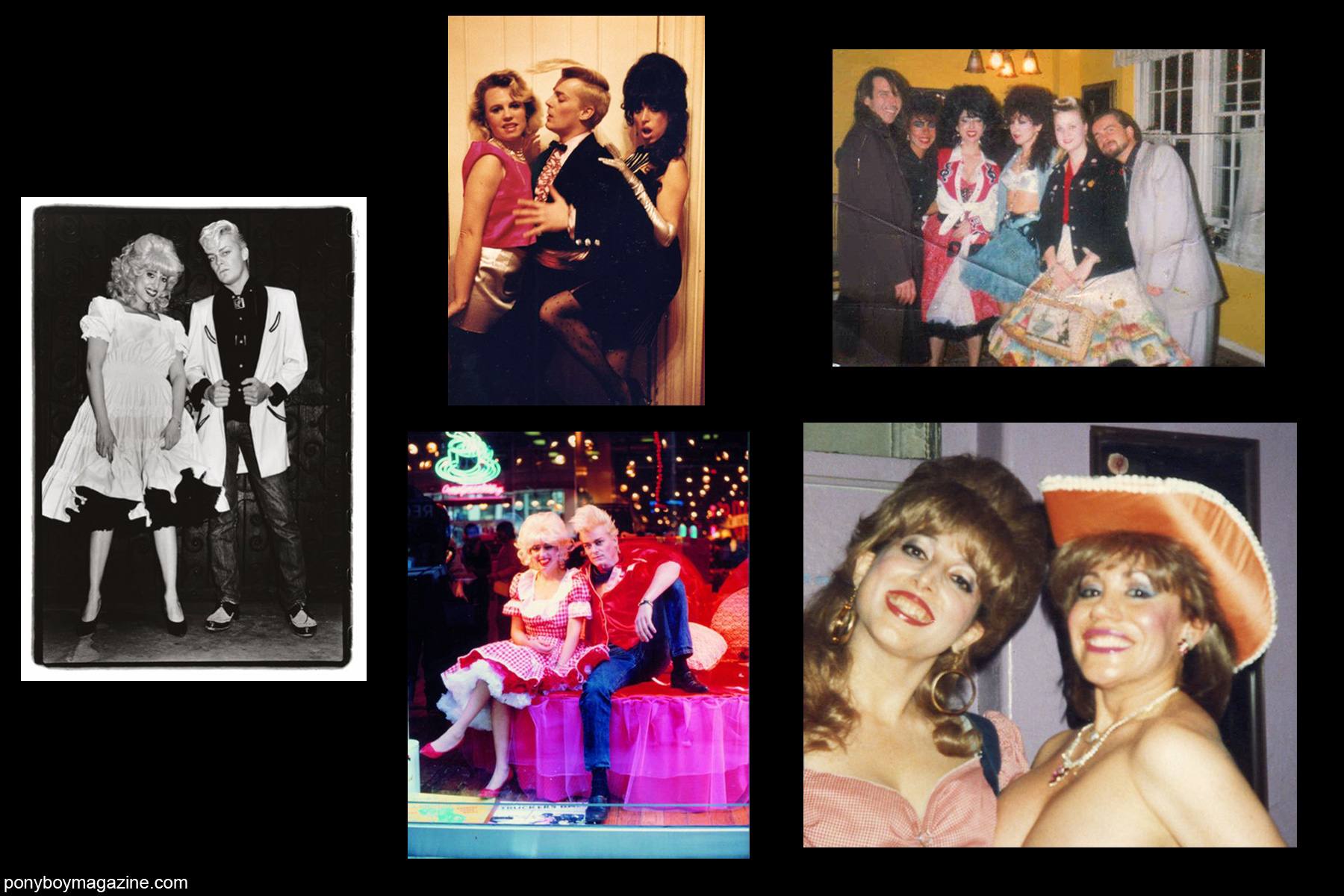 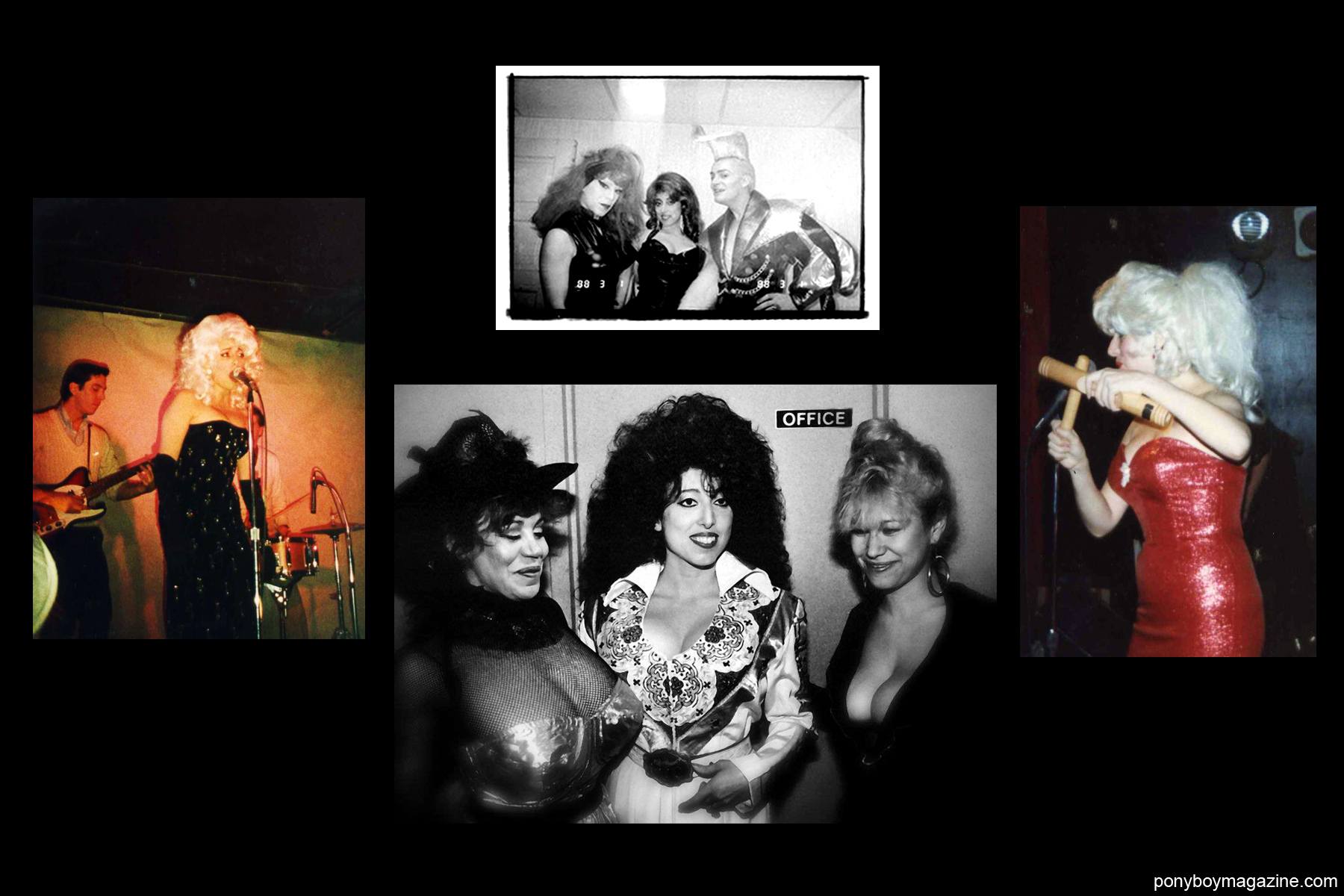 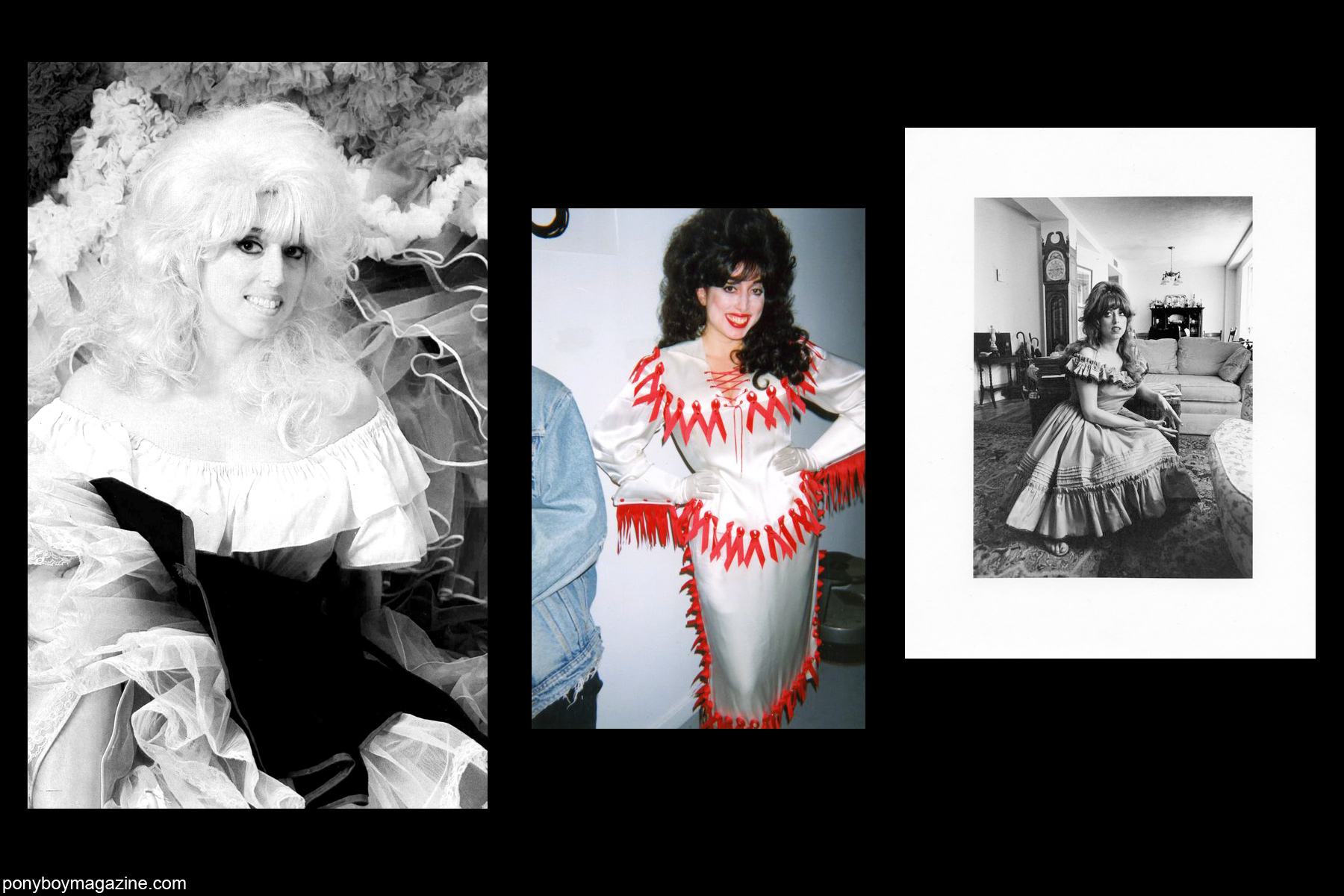 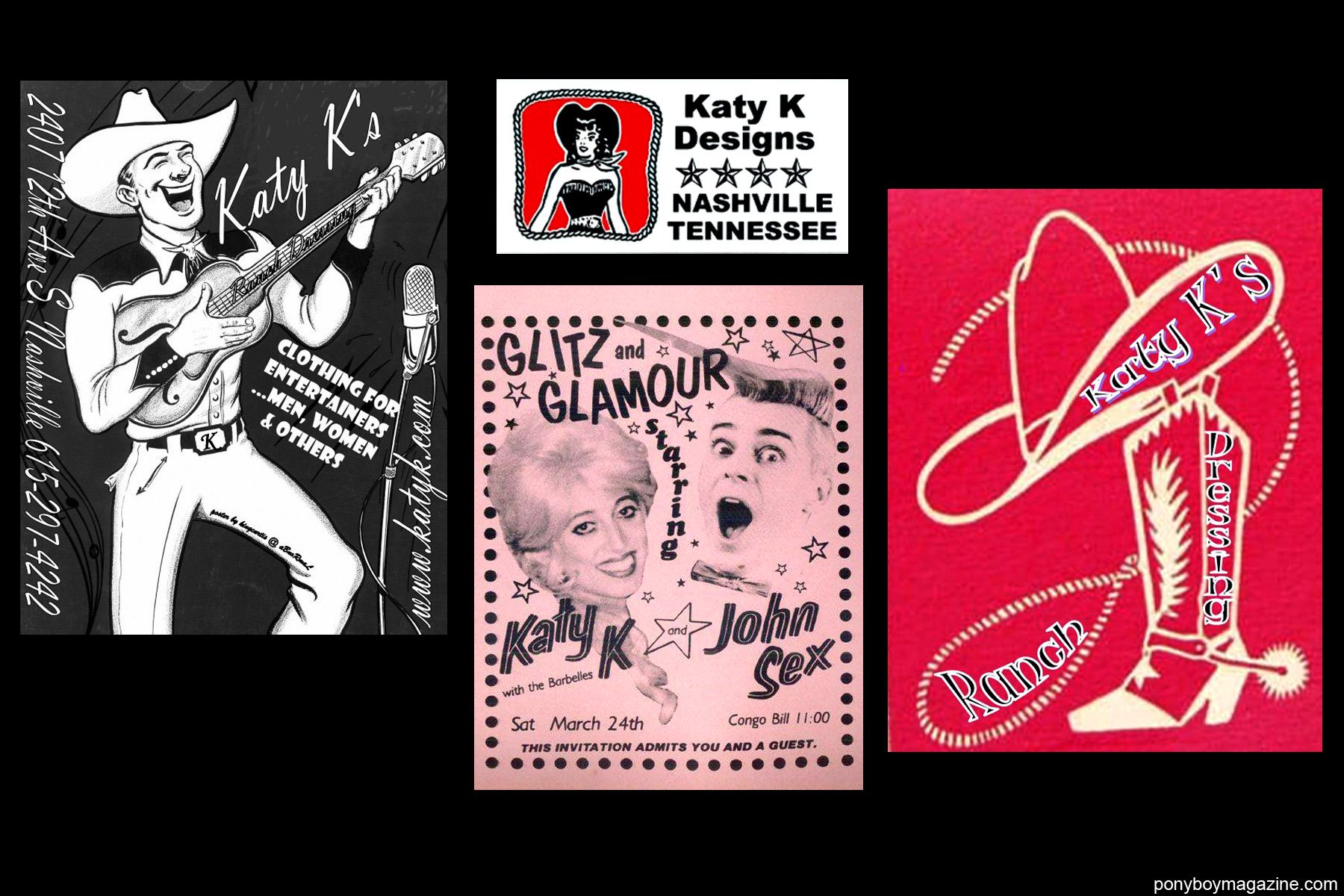 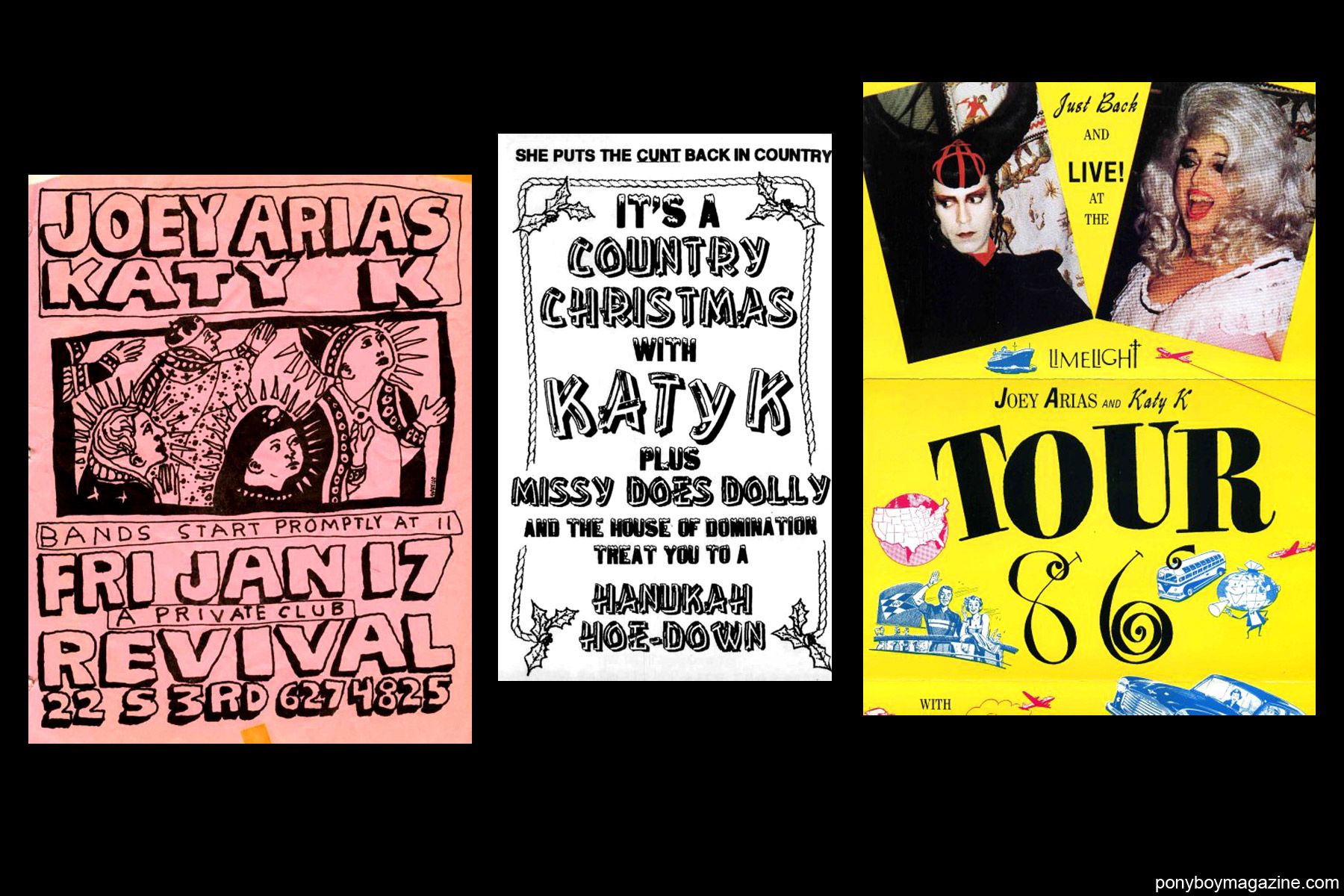 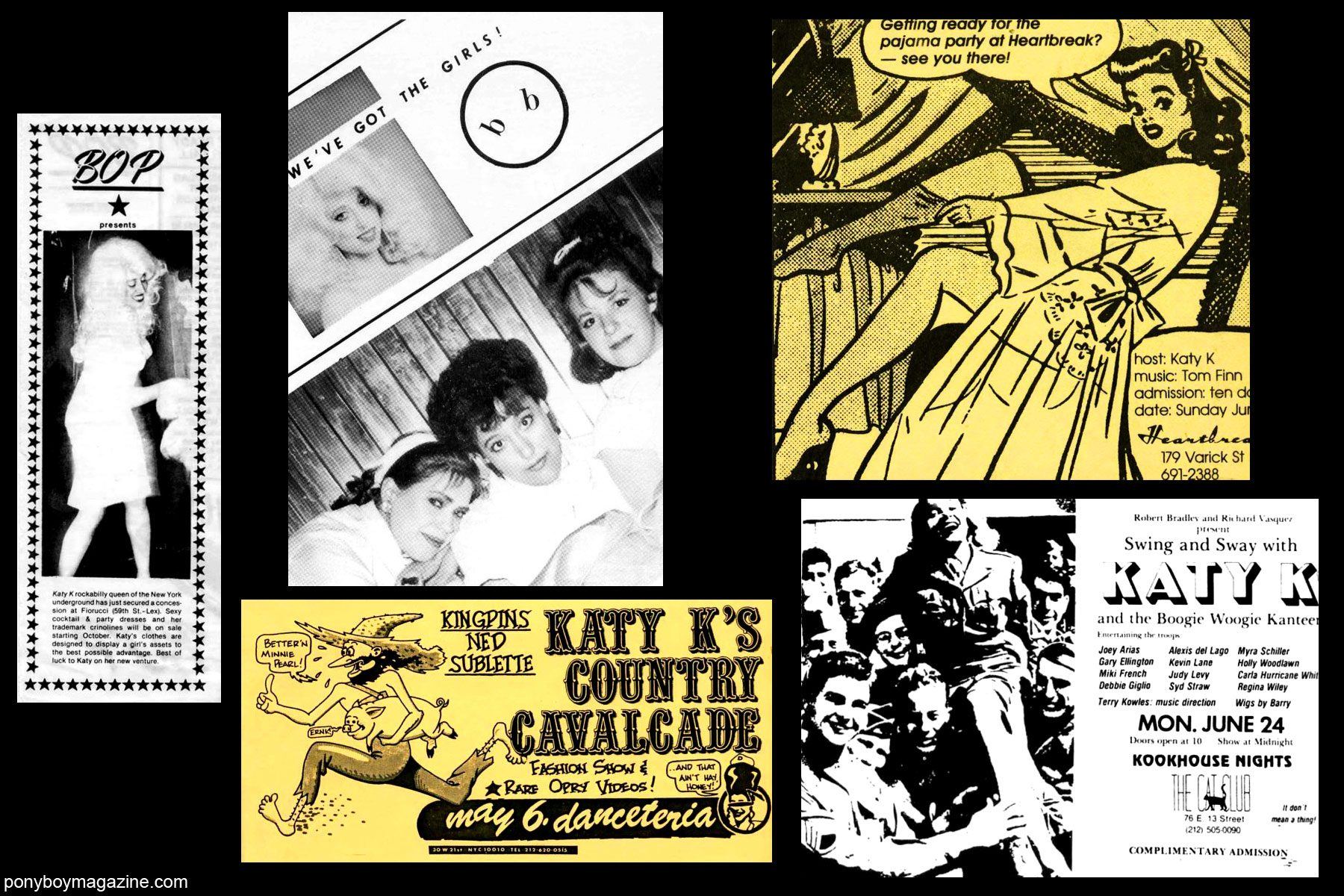 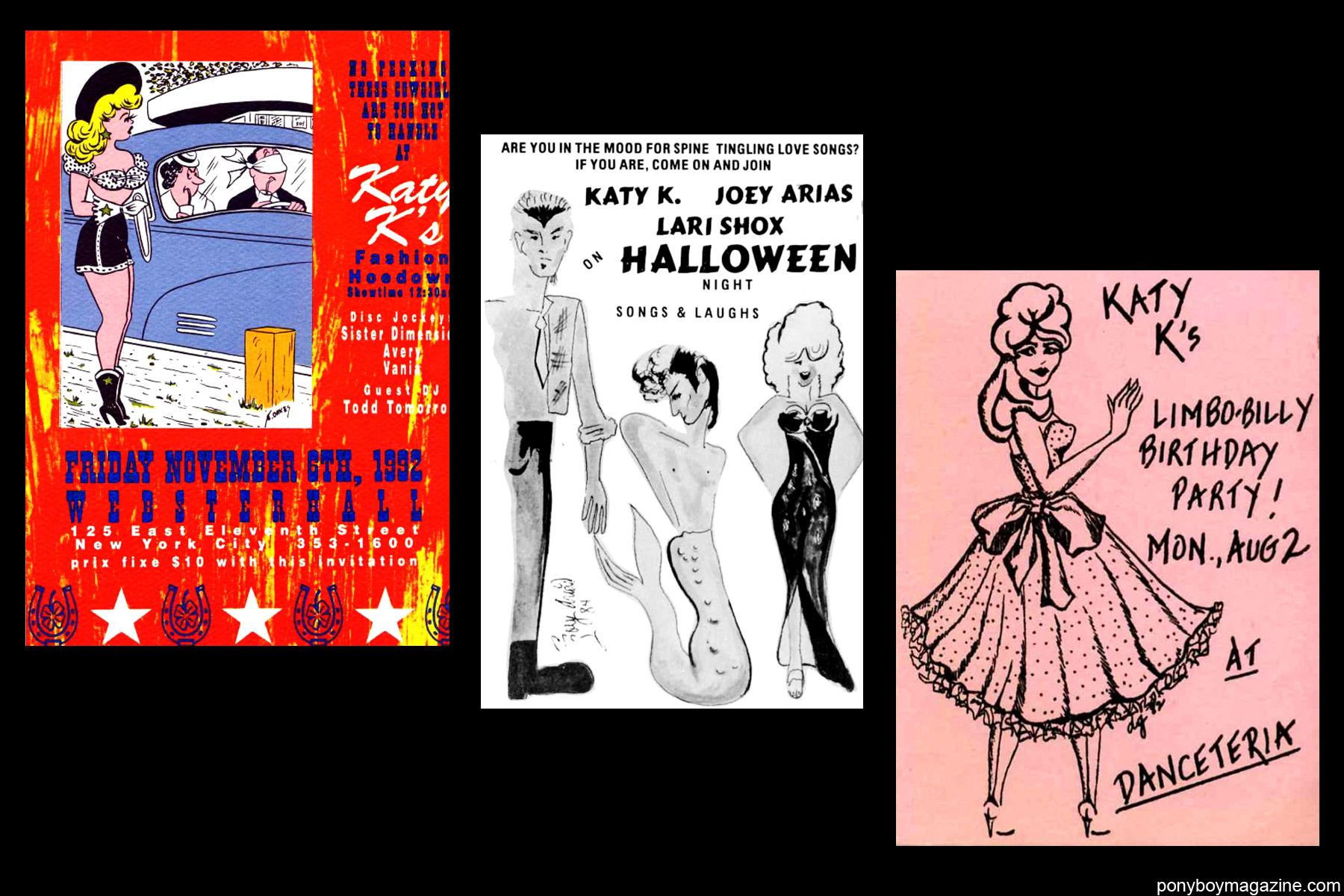 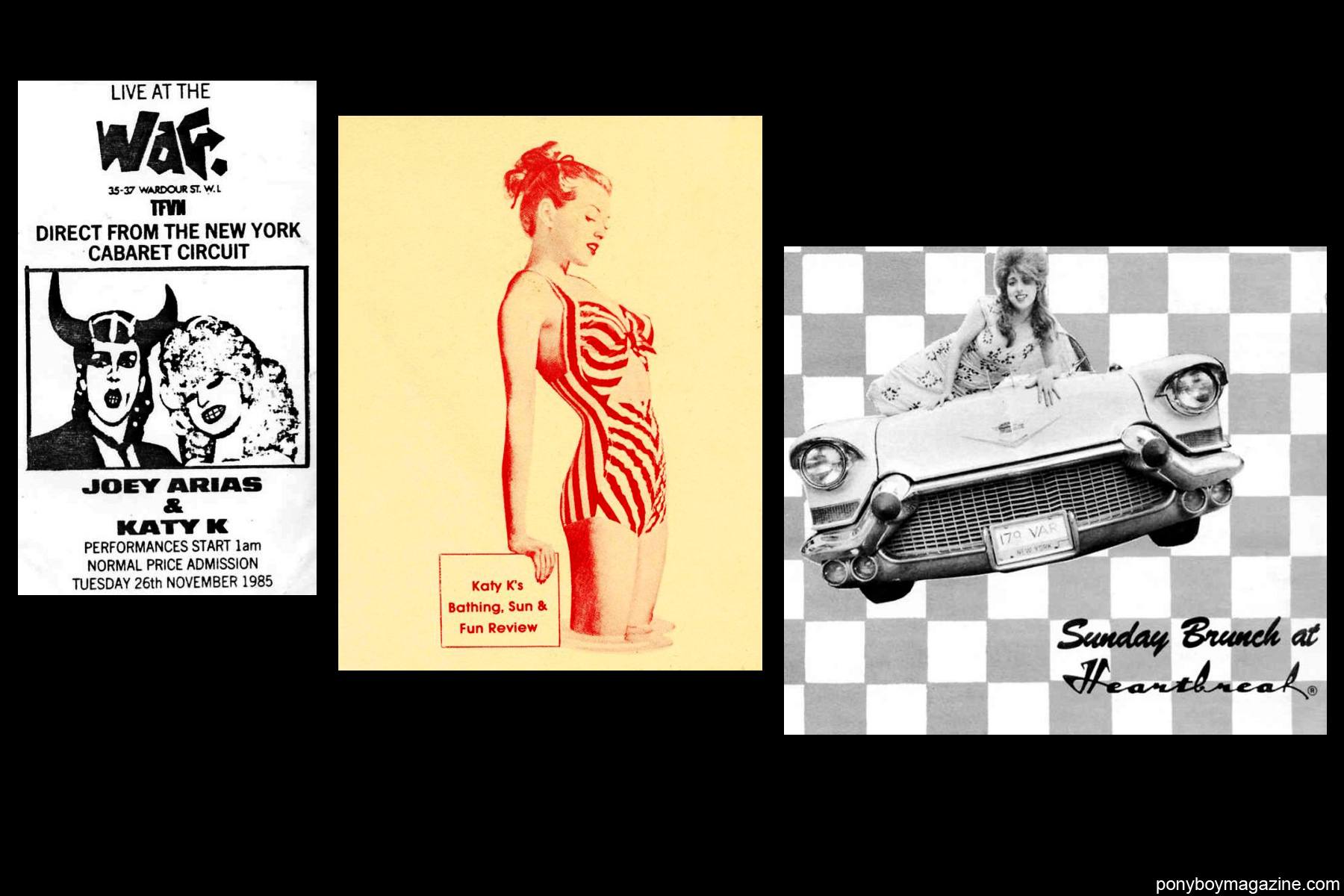 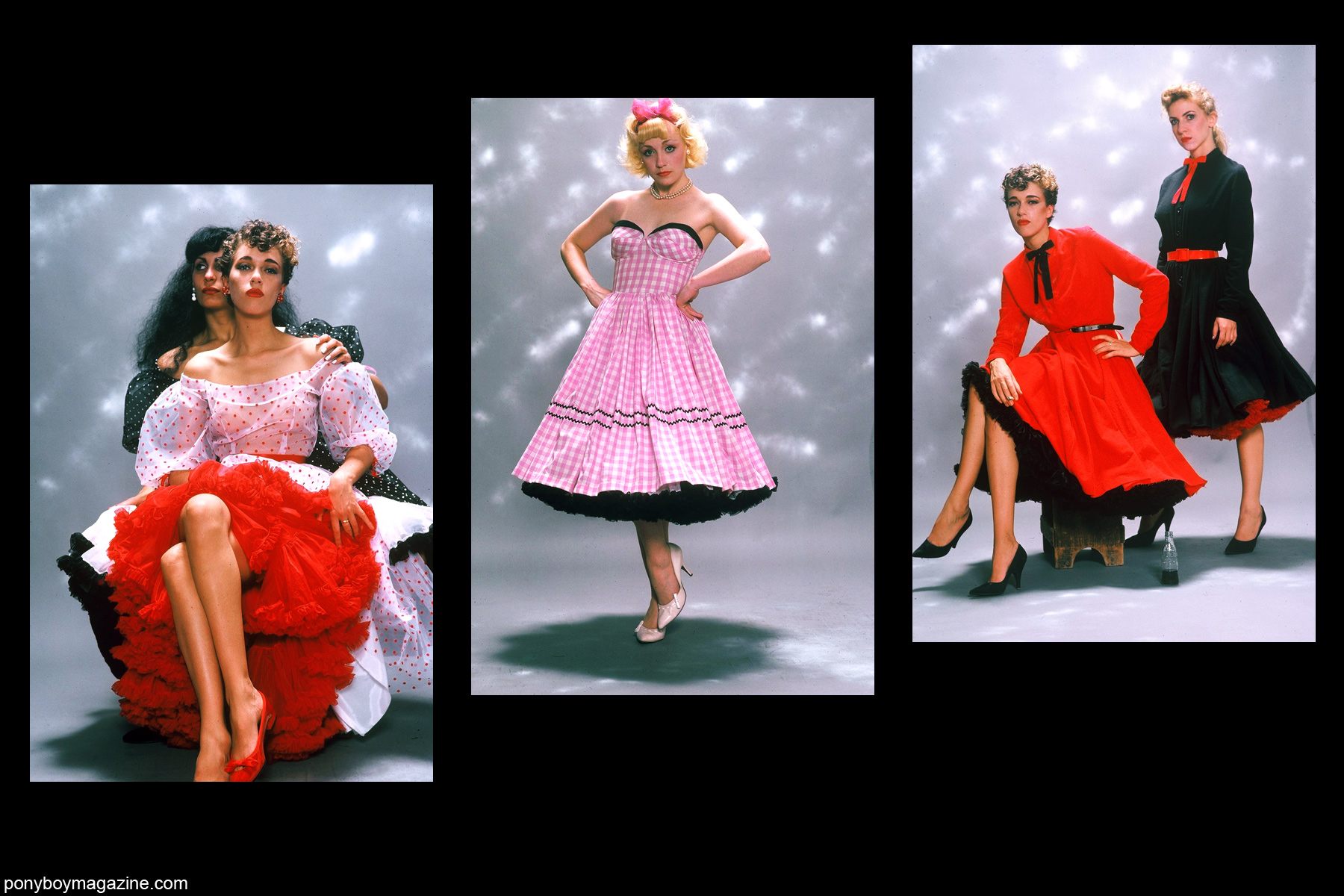 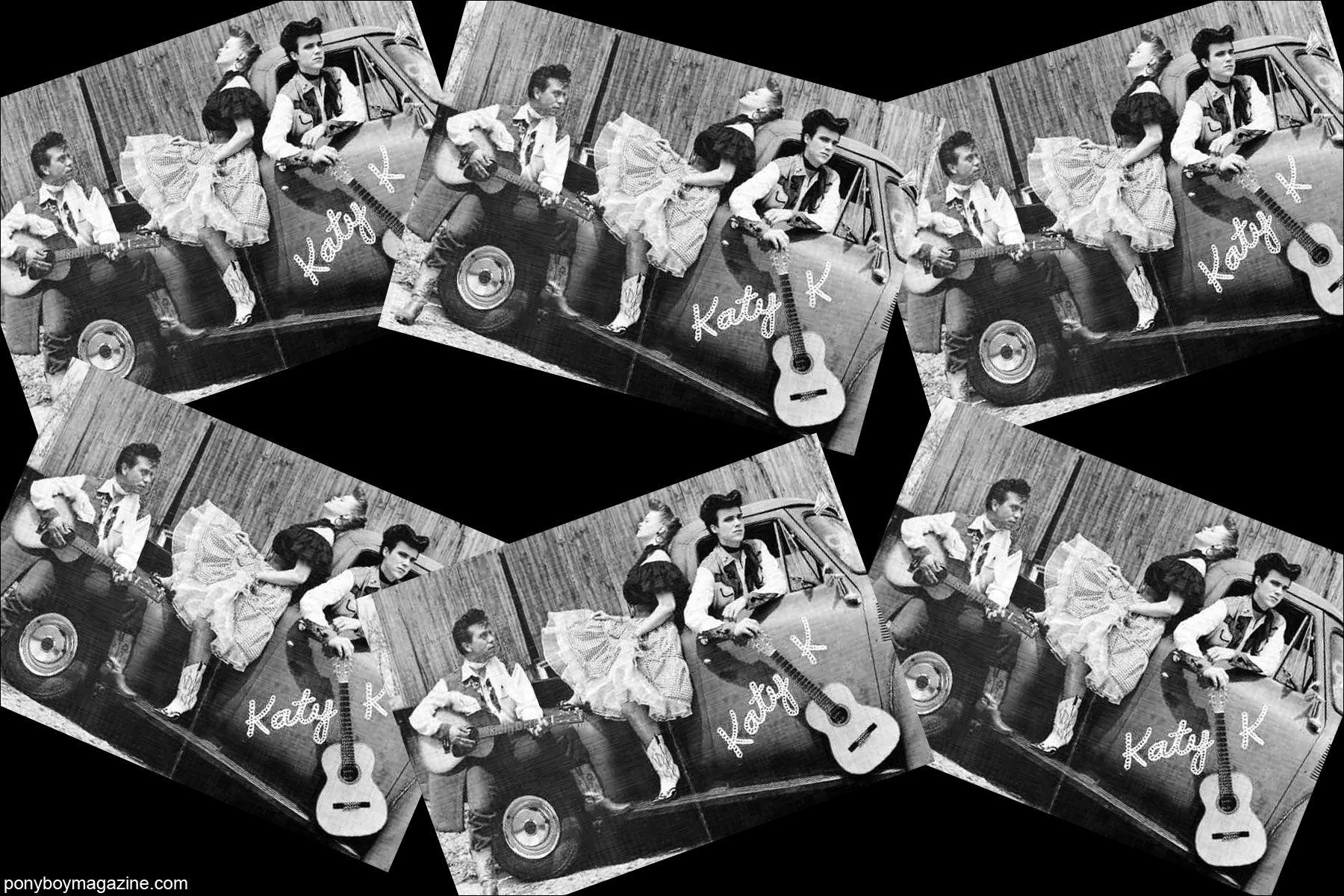 Downtown Darling. Performance Artist. 80’s Rockabilly Queen of New York. Underground Designer of County Couture. Kitschy Nashville Store Proprietor. “Katy K” has worn many hats – some of which may have been cowboy hats. This 1980s girl-about-town is legendary not just for the artists she befriended and performed with (who happened to include Klaus Nomi, Ann Magnuson, Joey Arias and John Sex), but for her quirky outrageous country ensembles that she donned at the coolest downtown clubs. As longtime aficionados of Katy K, we were beyond belief when she agreed to an interview with us. All photos courtesy of Katy Kattelman.

PONYBOY: You’re a New York transplant that’s now settled into Nashville for 20 years with your own amazing store named “KATY K’S RANCH DRESSING”. What made you leave New York and do you ever long for it?

KATY K: I left New York back in ’94 for several reasons. Screaming Mimi’s, the store that I had my retail concession in, had to move to smaller quarters when Tower Records took over the building we were renting. The new space on Lafayette was too small for me. I also was not happy with New York in the early ’90s. I started missing NYC in 2009 and got a place in Harlem where I go every month to recharge and get inspired.

PONYBOY: You were a performer back in downtown Manhattan in the 80s nightclub scene. How did that all come about?

KATY K:  Klaus Naomi called me one night and told me to come to this great club on St. Marks Place called Club 57.  The B-52’s were there and it was the coolest, most original and most unpretentious place I had ever seen. I met John Sex, Kenny Scharf, Keith Haring, Ann Magnuson, and so many more talented people.  We all started doing shows.  Ann was really the catalyst for all this. I remember doing an Elvis tribute, a Trucker’s Ball, and a Night at the Opry.  John Sex did a lot of the posters.  We even did a burlesque show when I bought my first pasties. Things were so open and accessible then.  I started doing shows everywhere like Mudd Club, Danceteria, Palladium, Webster Hall, The Ritz, etc. John and I were a team in the beginning but I later teamed up with three girls who later became The Bodacious Ta-Ta’s.

PONYBOY:  Being a big part of this exclusive community must have been exhilarating and wild. Please tell us your most surreal moment back then.

KATY K:  There were so many moments, like meeting Barry White in an elevator, being pushed by a drunken Bianca Jagger at Studio 54, being on Andy Warhol’s TV show, having to walk home barefoot on New Year’s Eve in the snow from the Mudd Club, blah blah blah got a million more…

PONYBOY: You were quite close to legendary performer John Sex and everyone sees photos of him from back then with the outrageous hair and clothing. What was it really like being his friend?

KATY K:  He was a shy boy from Long Island with a brown mullet when I first met him.  He was going to the School of Visual Arts and working in a coffee shop in the West Village. He was a talented screen printer and artist but never had the confidence. I think he may have felt eclipsed by Keith Haring and Kenny Scharf. He was like a sponge. He soaked up everything and took it nine steps further. He was a generous, truly fun-loving man and I miss him dearly.

PONYBOY: And how did designing clothes come about for you?

KATY K: I was wearing vintage 40s and 50s clothing and started altering them. I stayed with Sebastian and Jasper Conran a bit in the late 70s in London and they encouraged me to design.  I started making clothes for my friends and myself. My first project was making raincoats out of shower curtains and jackets out of velvet Elvis paintings. I just walked into boutiques and tried selling them. Sometimes it worked. Eventually, my friend Joey Arias got me a concession at Fiorucci’s which was the hottest store in it’s day.  I did a country-inspired booth with petticoats, western shirts and 1950s style clothing. By this time I had a wonderful Dominican lady named Lydia who actually did most of the sewing.

KATY K: My style icons were Maria Muldaur, when she was with Jim Kweskin Jug Band, as she was the first girl I saw wear fishnets. Some of my other icons were Ronnie Spector for eye make-up and hair, Mamie Van Doren, early Fredericks of Hollywood, Brigette Bardot, and Sally Starr, who had a kiddie show in Philadelphia when I was growing up.  She had platinum blond hair and Nudie cowgirl outfits. Also I would include Tempest Storm, Blaze Starr and designer Jean Louis who did a lot of Marilyn’s stuff and Nudie of Hollywood. Lastly I cannot forget Kitty Wells, Wanda Jackson, and my all-time favorite, Miss Dolly Parton.

PONYBOY:  Fiorucci was this huge mecca for the downtown New York “hip” in the 80s, even though it was located uptown. What was it like having an in-store boutique at that time?

KATY K: It was just wonderful. Everybody was there including Madonna, Elvira, Andy Warhol, Gloria Swanson, and Jackie O.  Joey Arias, who is one of my best friends, had a positive energy and through him I met everybody. People would come to Fiorucci just to see him as he was one of the first people in New York to have pink hair. He had a photographic memory and remembered everybody. He also is one of the funniest most imaginative humans on the planet. John Sex and I did a show in the window for Valentine’s Day. Klaus did a big show there as well. It was magical.

PONYBOY:  You’ve had some great celebrity clientele. Who was your favorite to design for and why?

KATY K:  My favorite was Kitten Natividad. She was so sweet and unassuming. We made her gorgeous VaVaVoom gowns with 20” zippers that she could easily remove on stage. Lydia and I had to build a special mannequin to accommodate her huge boobs. She stayed with me in NY for a while and I got to talk to Russ Meyer on the phone, which was a thrill.  Rufus Thomas was another great I worked with.  I made him a fake pony skin cape lined in gold satin. I also made stuff for Loretta Lynn that is in a glass case at the Ryman,  Cyndi Lauper, Whitney Houston for “I Want to Dance with Somebody.” Laura Wills who was one of the owners of Screaming Mimi’s got me tons of clients during early MTV video days.

PONYBOY:  We love Nudie of Hollywood. Are the pieces hard to find? How many Nudie suits would you say you own?

KATY K:  I personally own just two. When I first came to Nashville before the internet, eBay and Etsy, I found quite a few. I had a Roy Roger’s, Webb Pierce, George Jones, Skull Schulman, Bill Anderson, Johnny Cash and other over-the-top pieces. Sometimes I regret having sold them, but I am not a museum.  They are very hard to find now, although I just turned up two in California that I sold immediately on Etsy.

PONYBOY: Do you still own any of your Katy K archival pieces from the ’80s-’90s?

KATY K: Yes, I still have some.

PONYBOY: Are you still making clothing for clients and your store?

KATY K: I still do although the retail takes up much of my time as well as my real estate business.