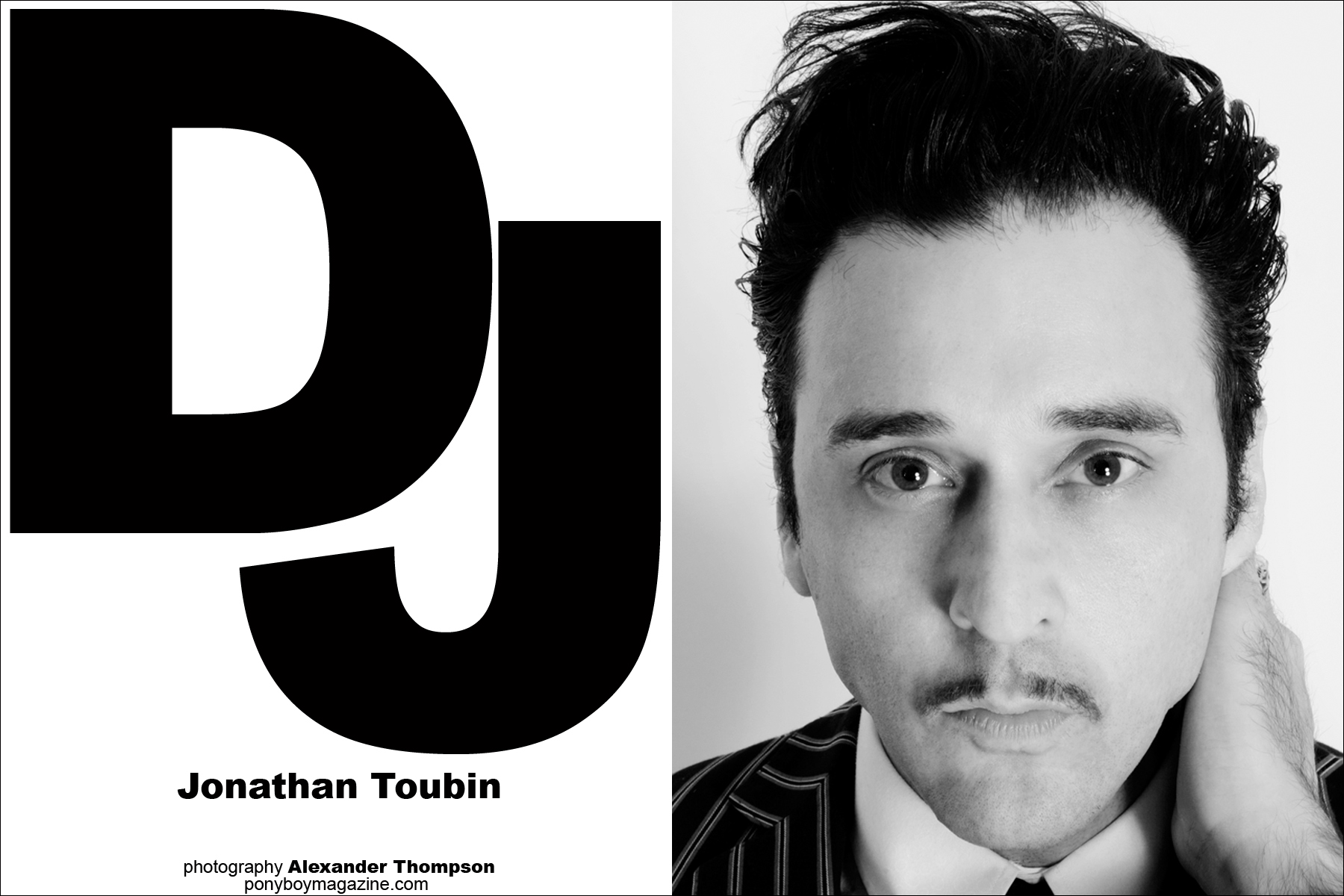 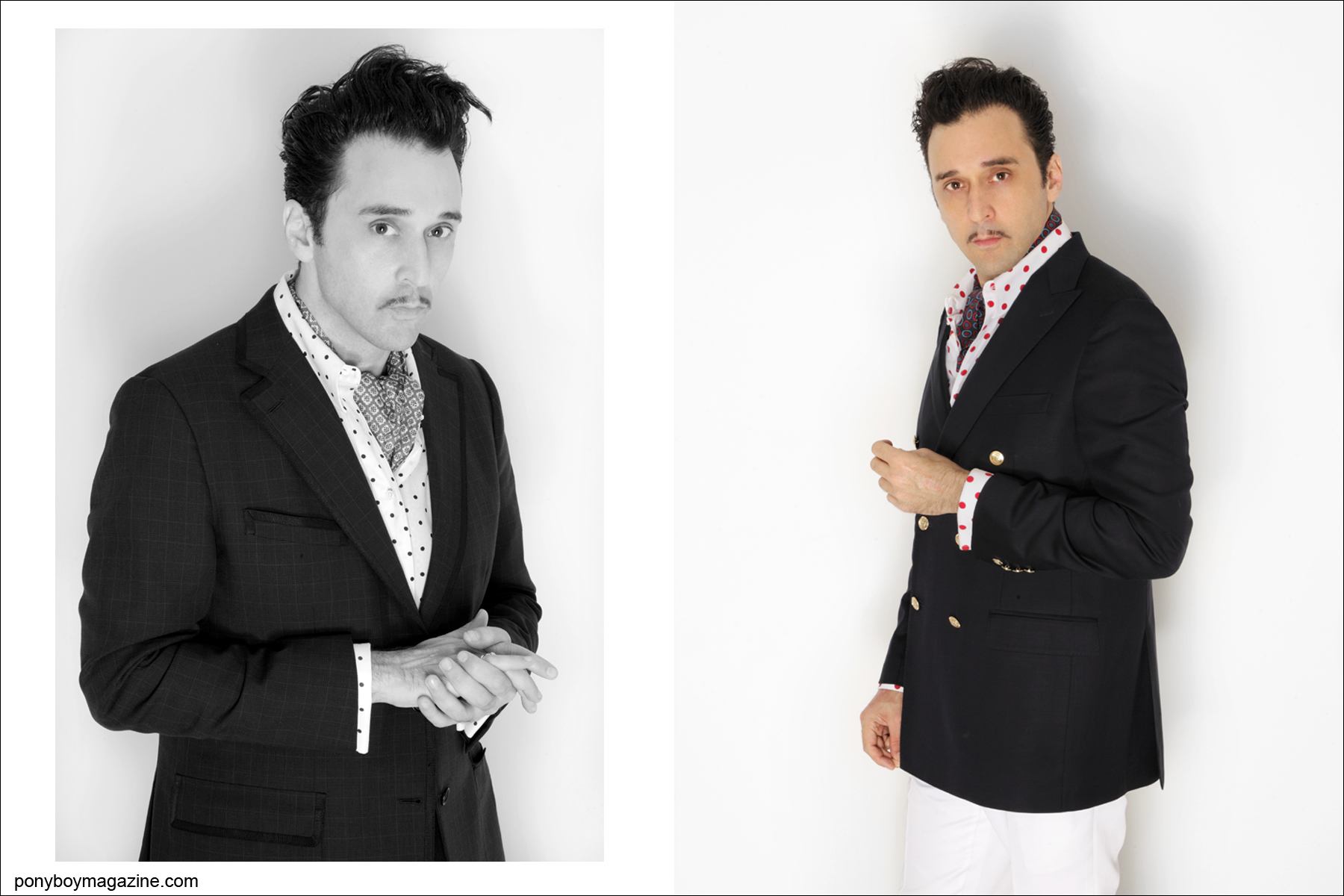 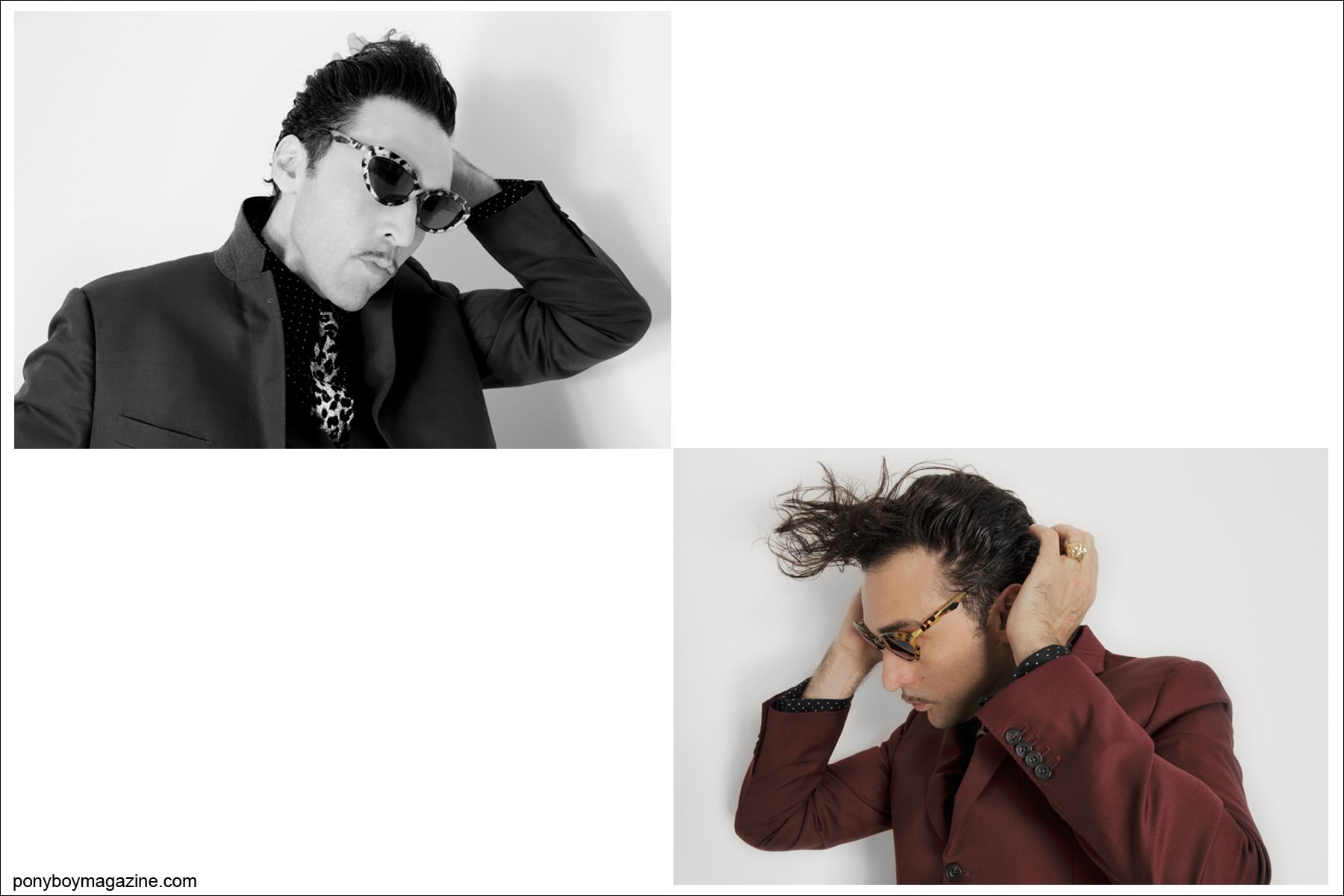 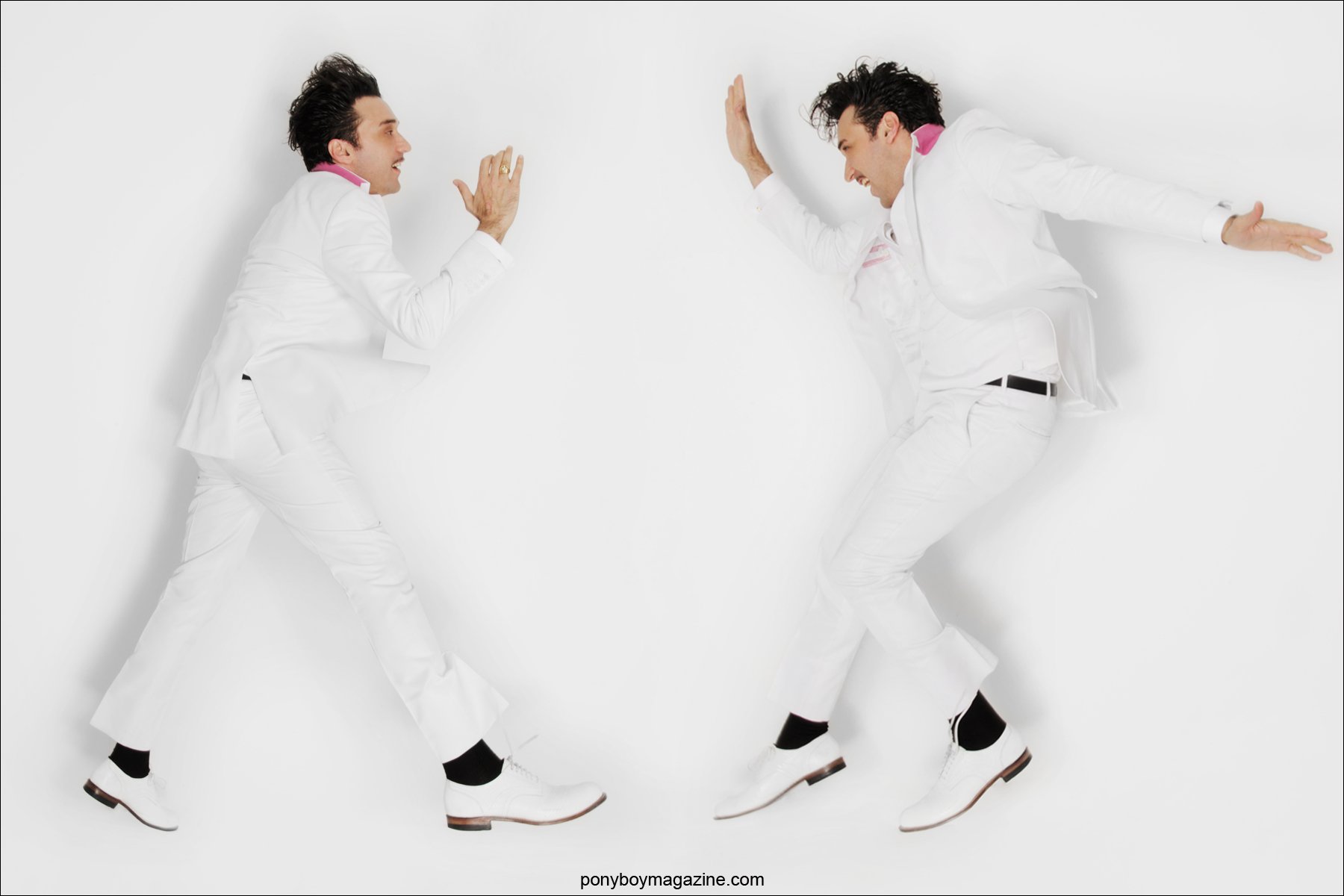 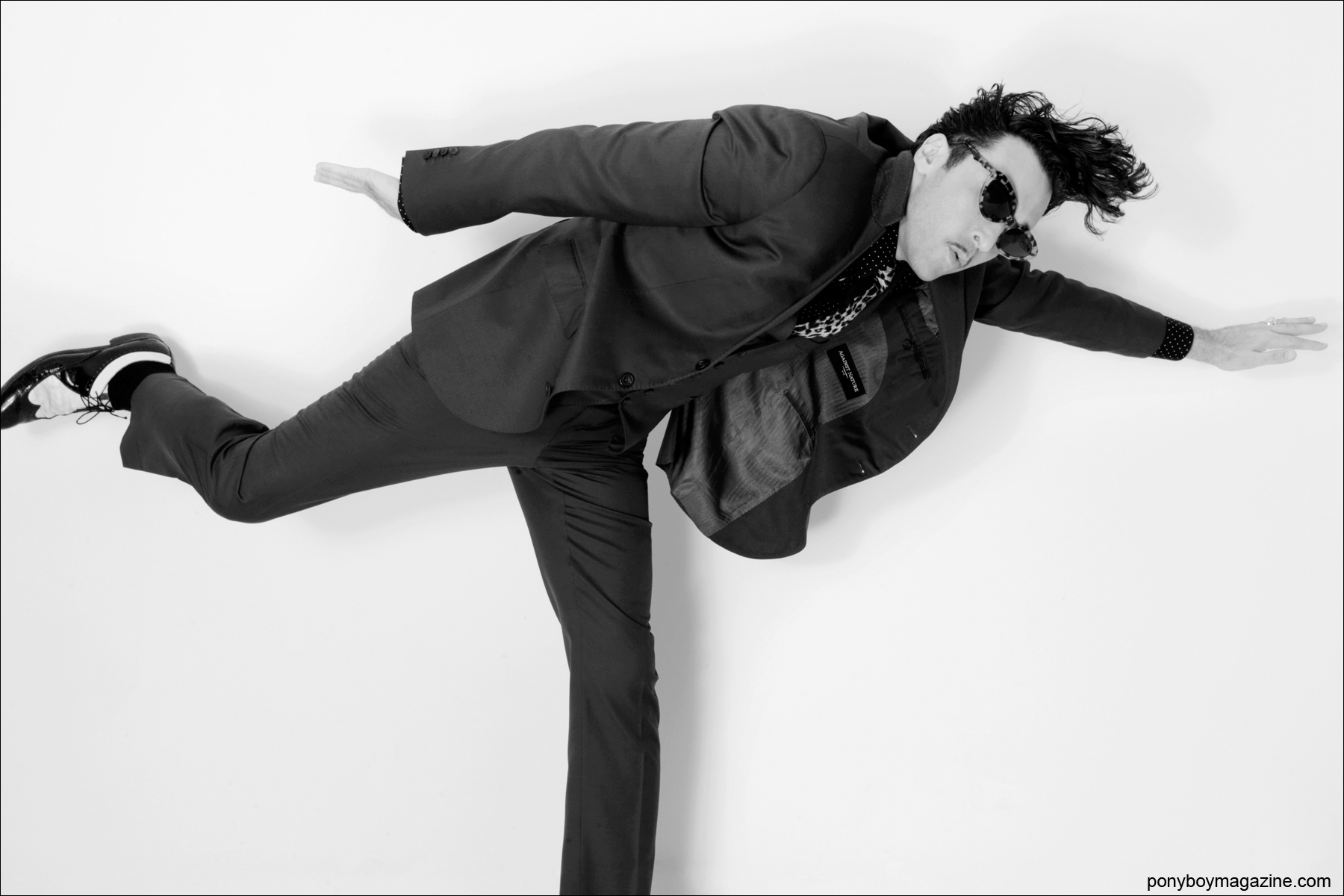 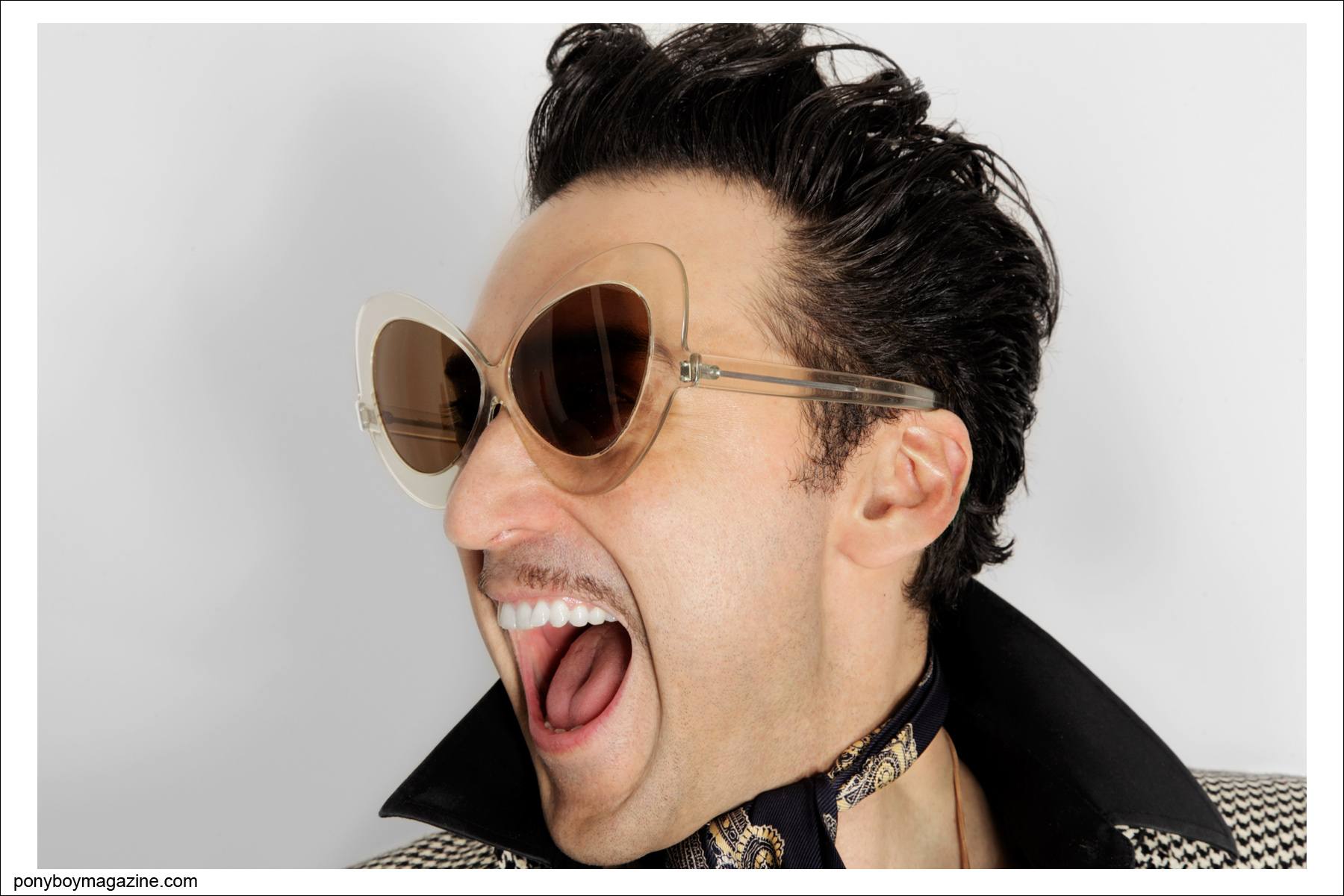 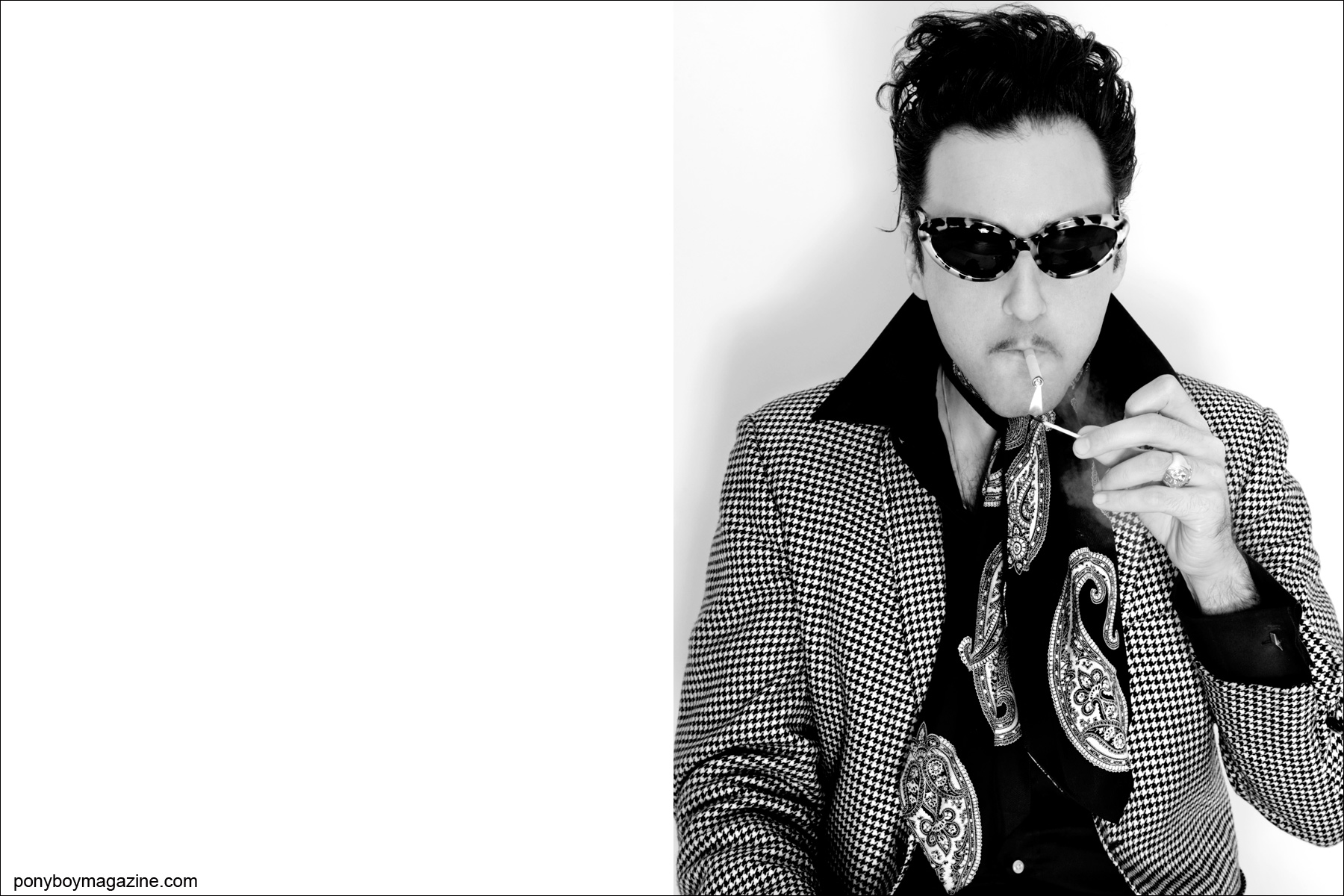 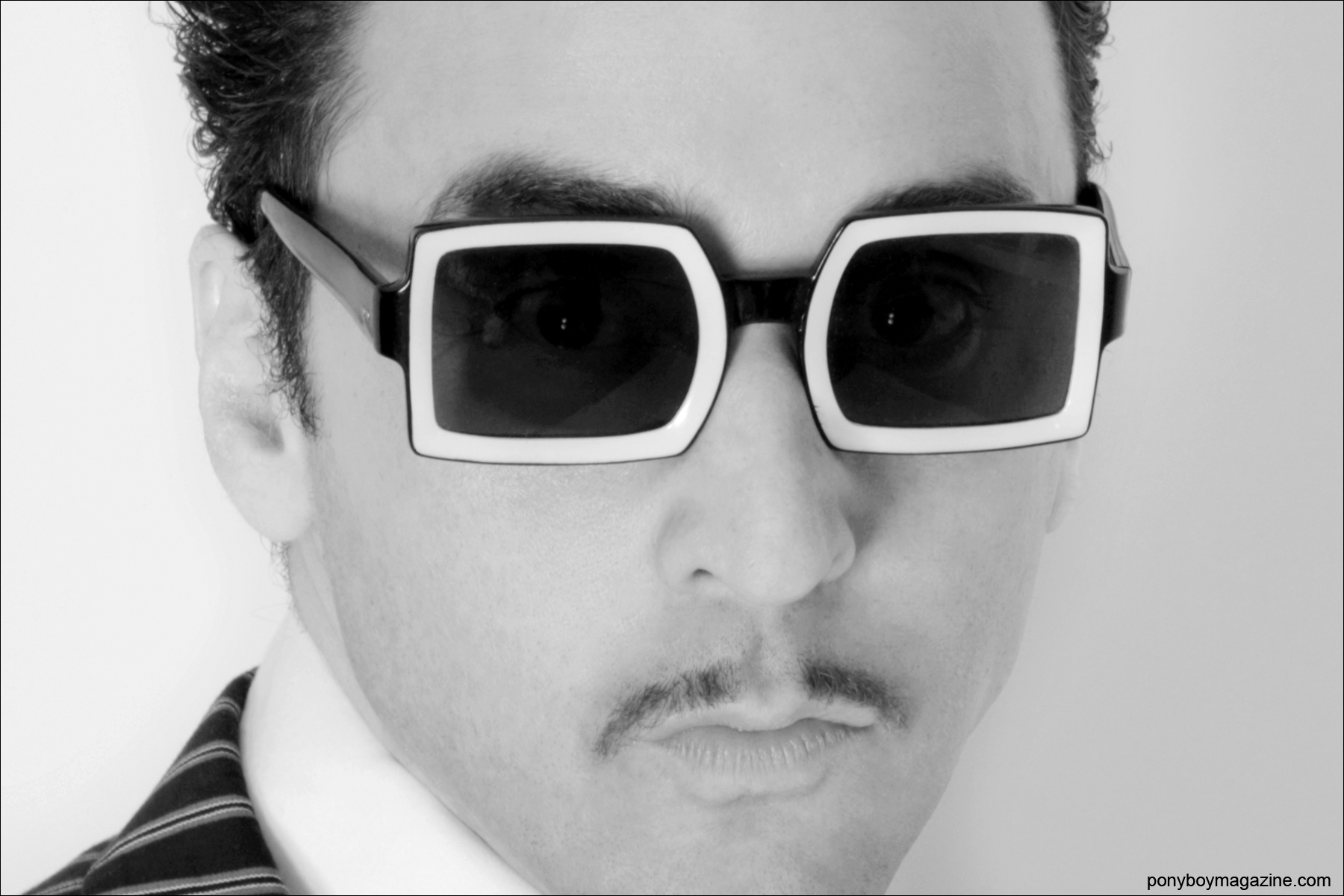 Jonathan Toubin is a very well-established New York City DJ known for exclusively spinning 45′ records, as well as for his infamous Soul Clap and Dance Off parties. In fact, his notoriety spans the globe. Over two years ago he was catapulted into the spotlight and global media after suffering a freak accident while in Portland for a gig. We caught up with Jonathan after our photo shoot, our inspiration being the amazing performer Esquerita, to find out how he’s holding up after his grueling rehabilitation and jet-setting all over the world to spin records.

PONYBOY:  Please tell us about your background Jonathan?

JONATHAN TOUBIN:  I was born and raised mostly in Houston, Texas. And then I went to college in Austin for nearly a decade before coming to New York City.

PONYBOY:  How long have you lived in New York?

JONATHAN TOUBIN:  I moved here in 1998. So, I guess I’m coming up on my sweet sixteen year.

PONYBOY:  Ha! How did you get into djing?

JONATHAN TOUBIN:  Well, I’ve been into buying records since I was a kid. I worked at record stores and spent a few years on college radio and occasionally played records at punk shows. But I was more interested in being a musician in bands than a DJ. I honestly never looked at a club DJ and thought that person was somebody I wanted to be. Fast forward to 2006, I put on a record release party for Kid Congo Powers and did a decent job. So, Ian Svenonius and Calvin Johnson asked me to put on two DJ gigs for them. Then Hari from Motor City said he was booking Wednesdays and I should do a party there. I started turning up with a lot of special guest DJ’s and spinning mostly Texas punk and garage, psychedelic stuff, blues, etc. People started asking me to play at their clubs and within a year I had more gigs than I could handle. So I quit my day jobs.

PONYBOY:  You’re well known for spinning 45’s. Do you play these exclusively?

JONATHAN TOUBIN:  Yes! When I started at Motor City I played everything, even cds, mp3s, and vinyl comps. But when I started finding original 1950’s-60’s 45’s, they sounded so much bigger and were harder to follow up with than the other stuff.  I started getting asked to spin dance parties, so I was really at a loss with just my punk and rock. I tried out a lot of stuff. But I noticed that the big drums on the early rock and soul records really stood out and got people on the beat. And it felt totally different at that volume than the more recent records, re-issues and digital stuff.

PONYBOY:  When did your career as a DJ really take off?

JONATHAN TOUBIN:  It’s hard to say. There’s always been a slow and steady. I probably picked up an average of five people per night just by being there in the early years. But that adds up after 1600+ nights. In New York City in 2008 I had six weekly residencies, tons of after hours and crazy one-off parties, and some road gigs. I definitely could feel something happening. In 2009 I hooked up with Panache Booking and started touring more consistently, as well as spinning more international parties. But really it’s been a slow build and even though there have been a few bumps, like after my accident, I’ve developed most of my following the old-fashioned way by just being there.

PONYBOY:   Of course, everyone wants to know about the freak accident.

JONATHAN TOUBIN:  Well, yeah, basically I got run over by a car in a hotel room bed in Portland, Oregon and it nearly did me in. It broke and punctured most everything there is to break and puncture. And after a lot of time and medical attention, I slowly got back to New York and to my life in mid-2012. Oh, man, there’s not much to say that hasn’t been said about it! I’m so glad that chapter of my life is over. I’m just happy to be functional and getting back to what I do. Also, I am extremely grateful to everyone that helped me out with the benefits, especially my girlfriend and family, and everybody that showed me so much love and support. And finally, I’m super stoked to have Obamacare as of a few weeks ago. I couldn’t get coverage due to my encyclopedia of pre-extisting conditions.

PONYBOY:  Do you still suffer any after effects? The rehabilitation must have been brutal.

JONATHAN TOUBIN:  Hell, yeah! But what can you do? My big thing is that I need to get my ears working again. My hands are still healing and stiff. I also still have a lot of glass in me that needs to come out and some metal that needs to stay. I have scars and aches and pains. But, overall, I came out smelling like a rose!

PONYBOY:  Your friends threw a major benefit show that featured the Yeah Yeah Yeah’s, Gibby Haynes from The Butthole Surfers, Jon Spencer’s Heavy Trash and many more to help with your overwhelming hospital and medical bills. It must feel really good to have had such great support from family and friends.

JONATHAN TOUBIN:  Yeah, always!  I can’t begin to tell you how grateful I am to the many amazing folks in my life! I couldn’t have done it without them.

PONYBOY:   Does flying around the world get tiring?

JONATHAN TOUBIN:  Sometimes! Today I just got back from Australia. When I transferred at LAX from a thirteen-hour flight to a six-hour flight, I certainly questioned my existence and didn’t want to get on board. But it’s amazing to see these places, meet the people and eat the food. But most of all it’s fun to make them dance! And very interesting to see which of the records they get into and which they don’t. The differences are broader than you’d imagine. But, yeah, I guess I’m always tired, but happy to do the job and grateful that anyone actually wants me to do anything anywhere.

PONYBOY:  We love your SOUL CLAP & DANCE-OFF parties. Do you have any plans in the future for anything major?

JONATHAN TOUBIN:  February 22nd is the first ever National Dance-Off at Brooklyn Bowl. The Brooklyn Brewery is flying the first-place winners in from around the USA and Andrew WK is going to be my contest selector. What’s particularly great about this event is that one contestant will be picked from people who happen to turn up at the party, They’ll get a chance to get into it with the national champs at the end for the $1000 grand prize. The Soul Clap party will also be the official closer of SXSW in Austin again, as well as at The Burgerama Festival in Orange County. I have lots of US and Canada trips planned until May, when I’m back to Europe.  I still have my long running rock-n-roll party at Home Sweet Home every Friday as well.