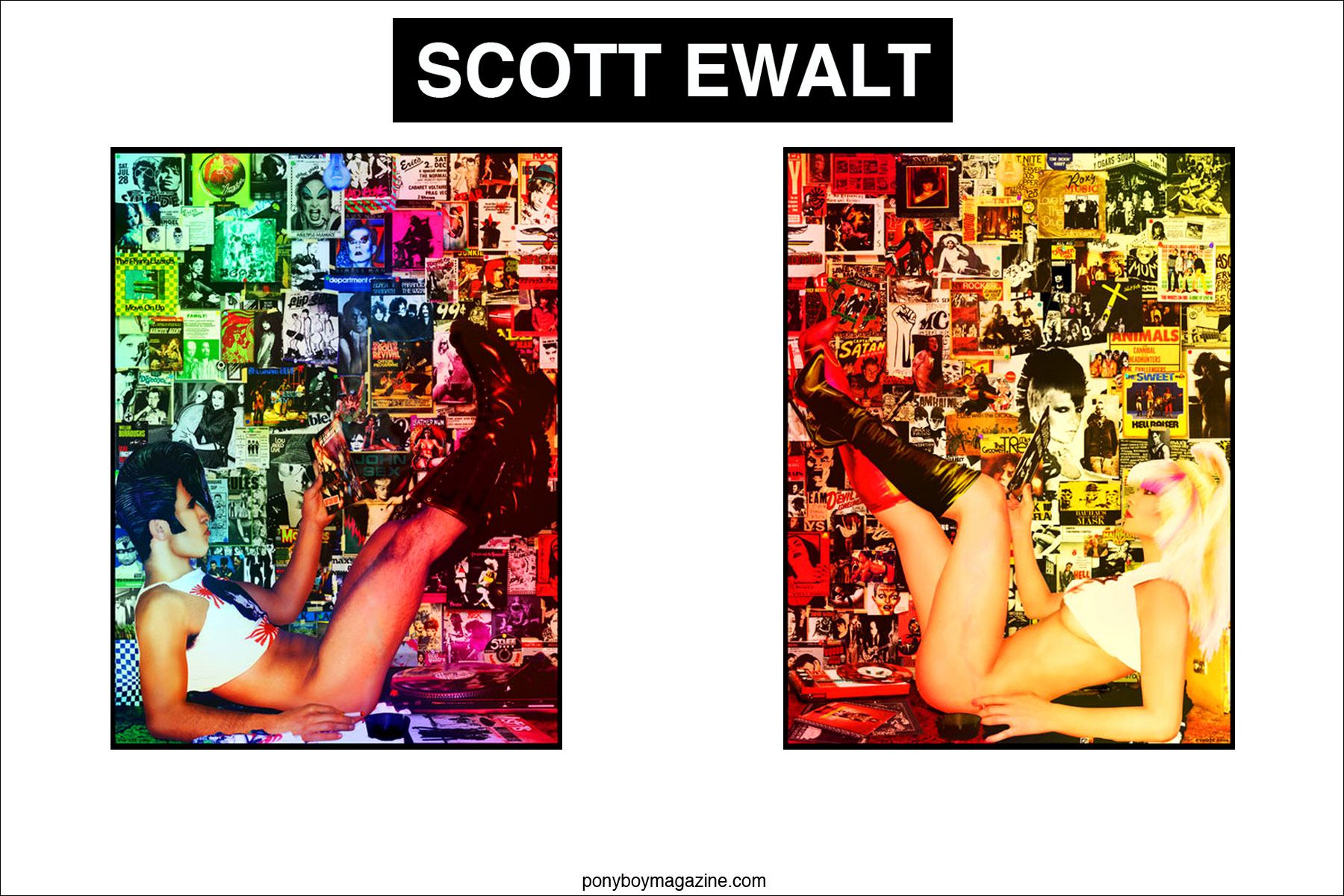 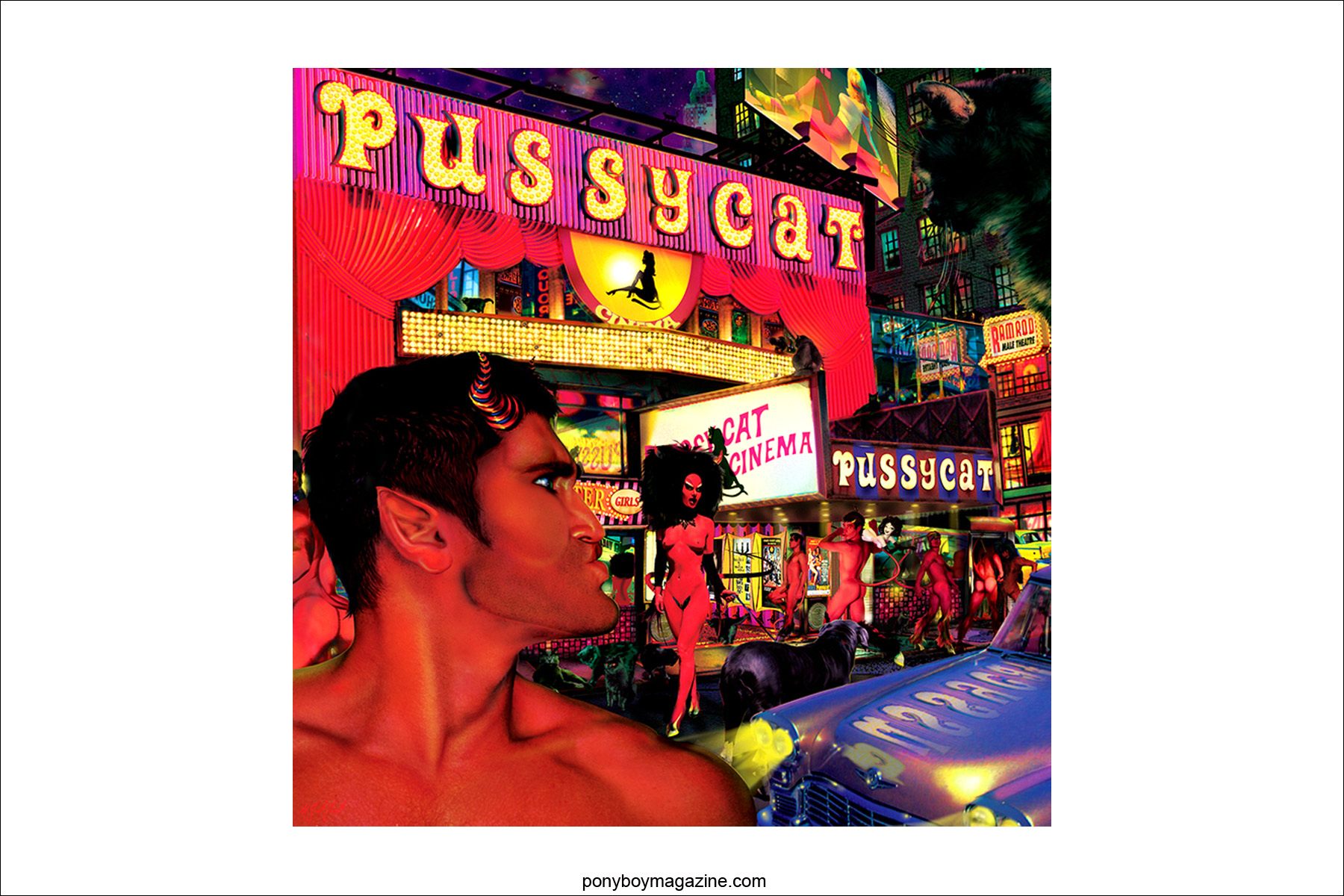 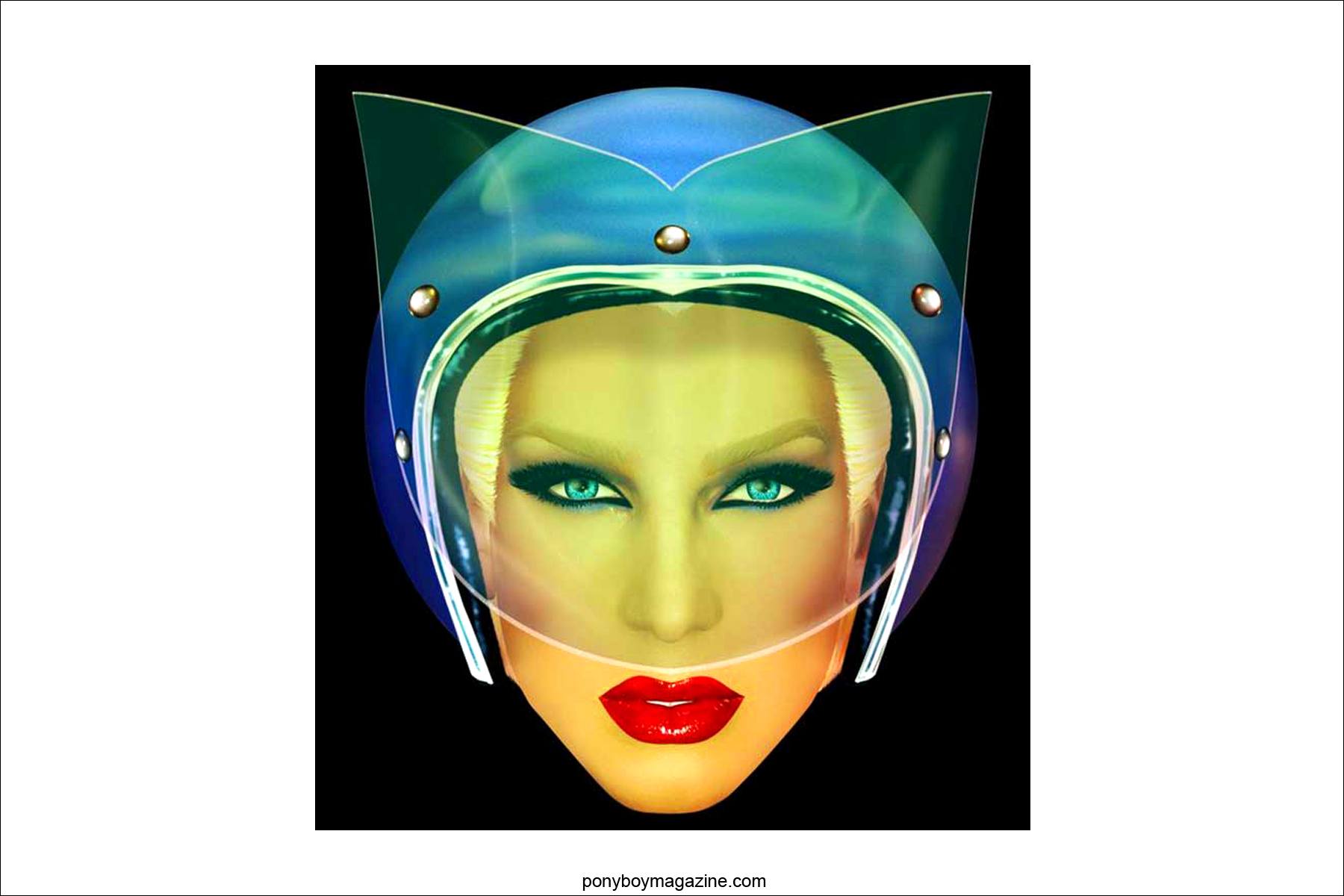 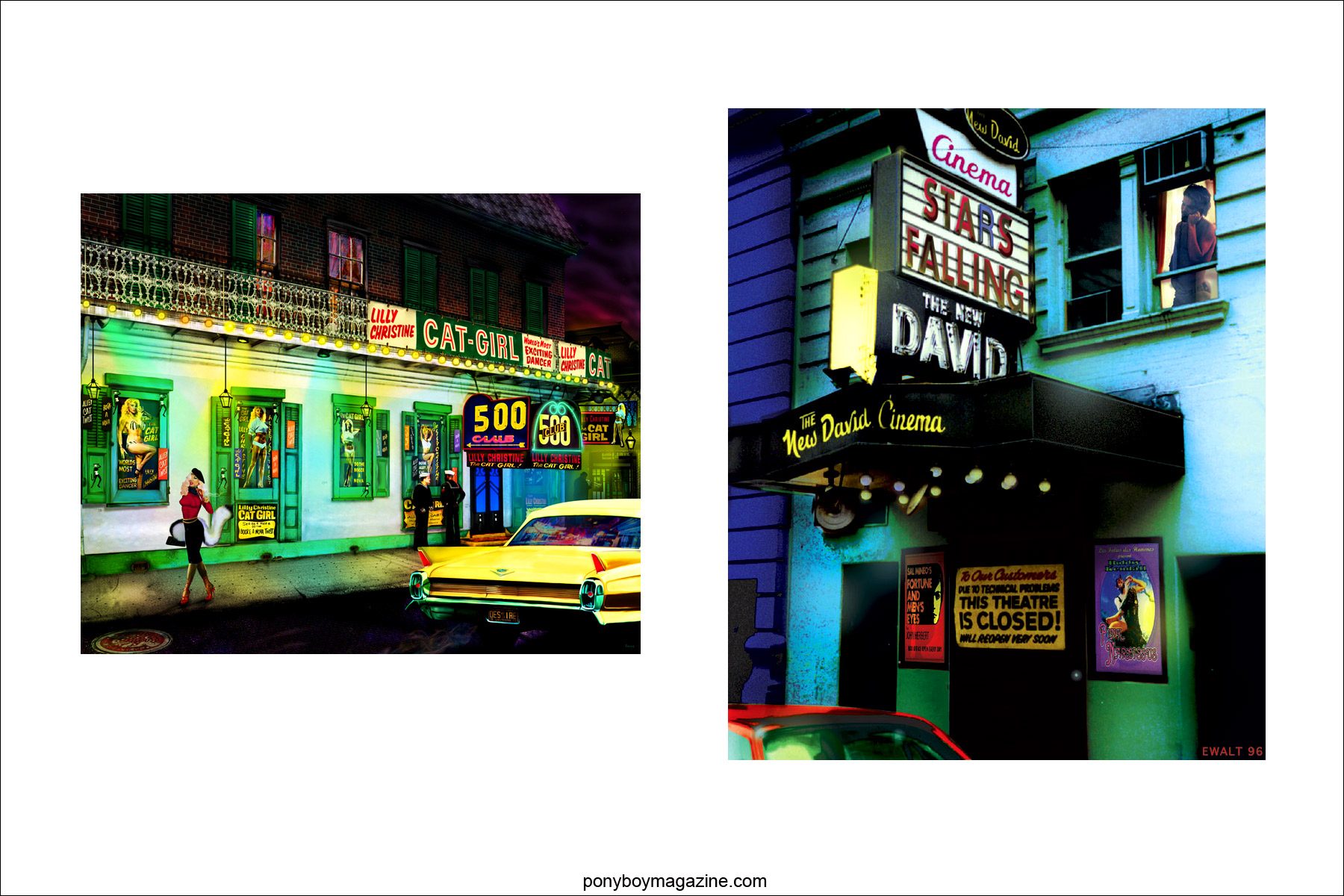 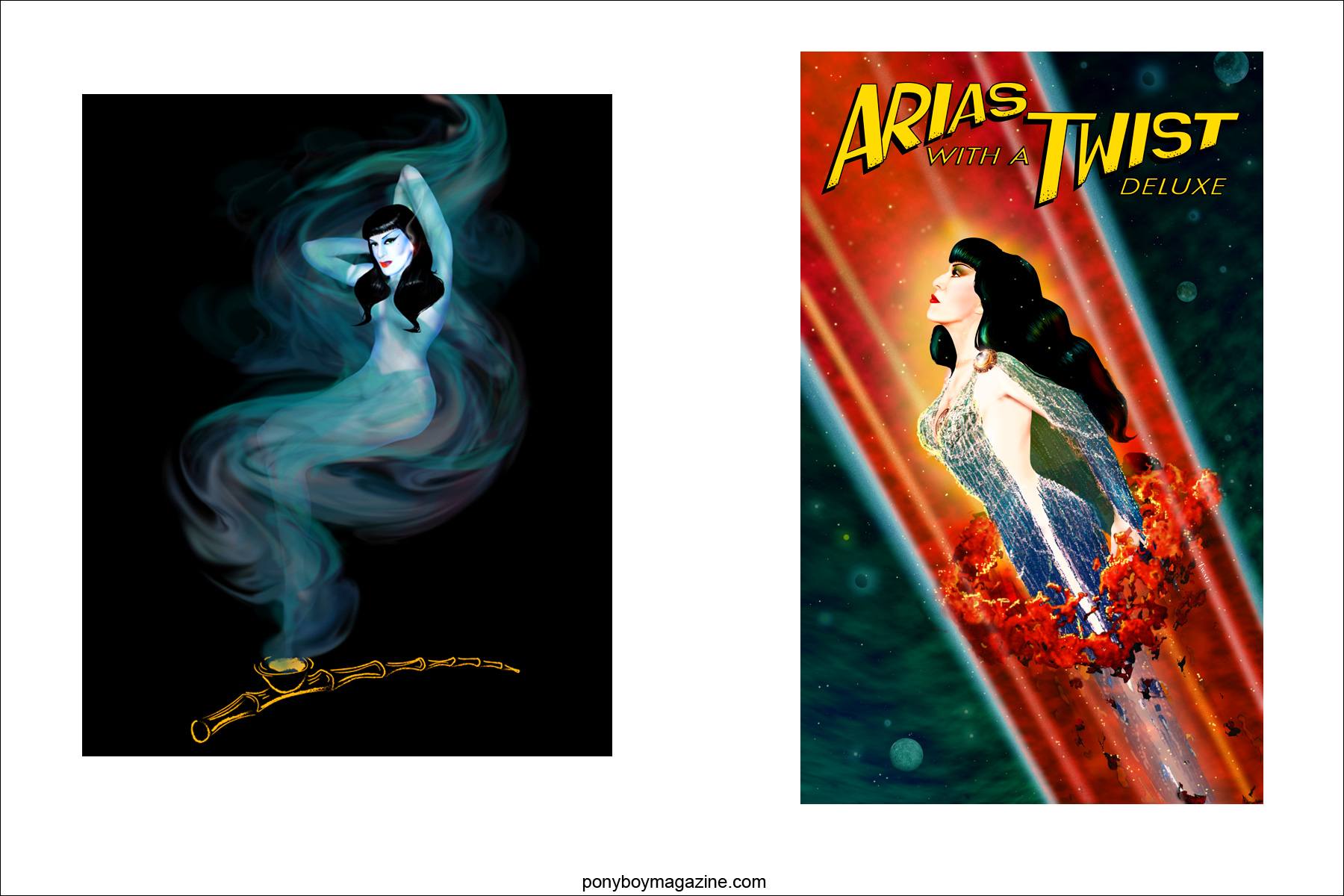 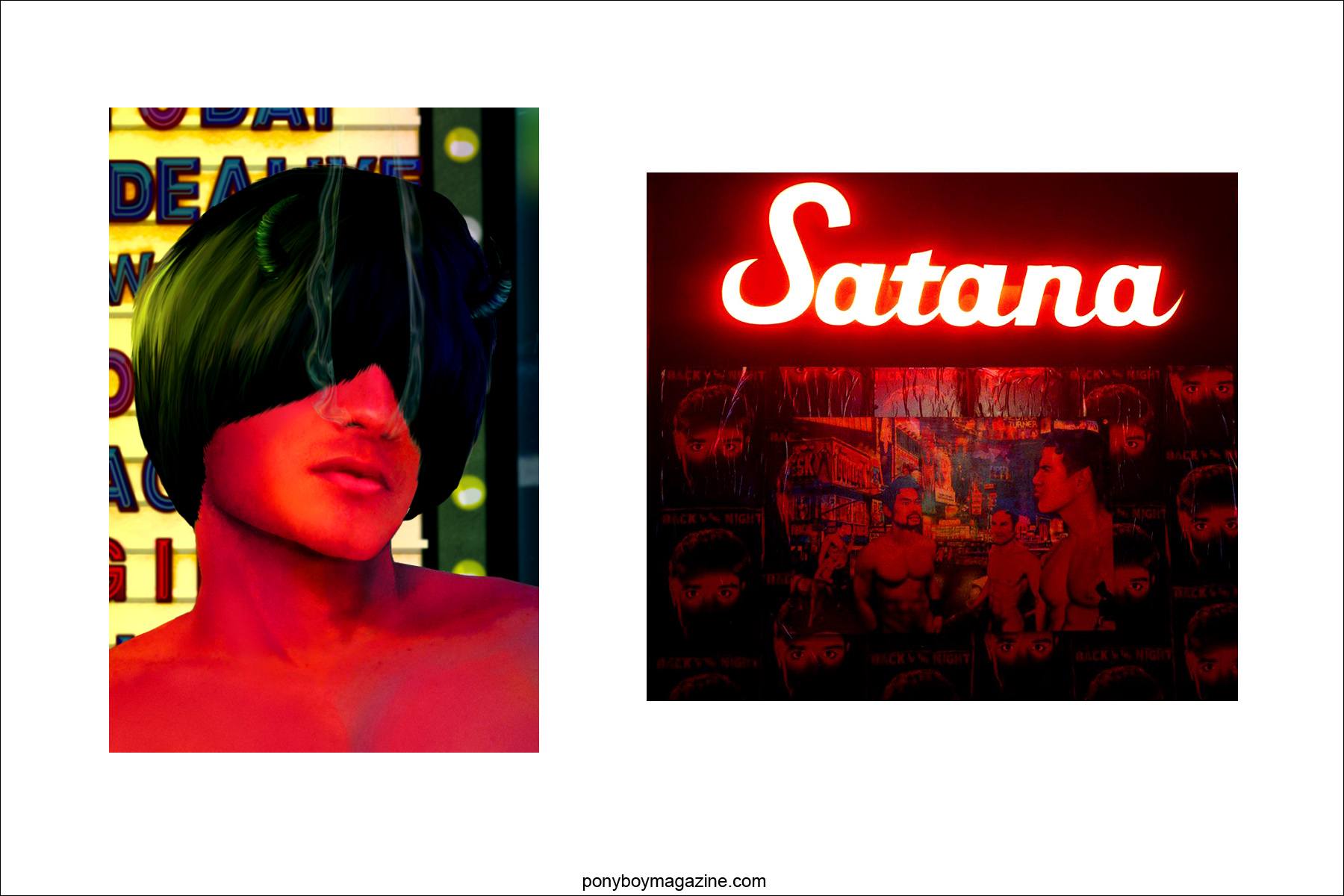 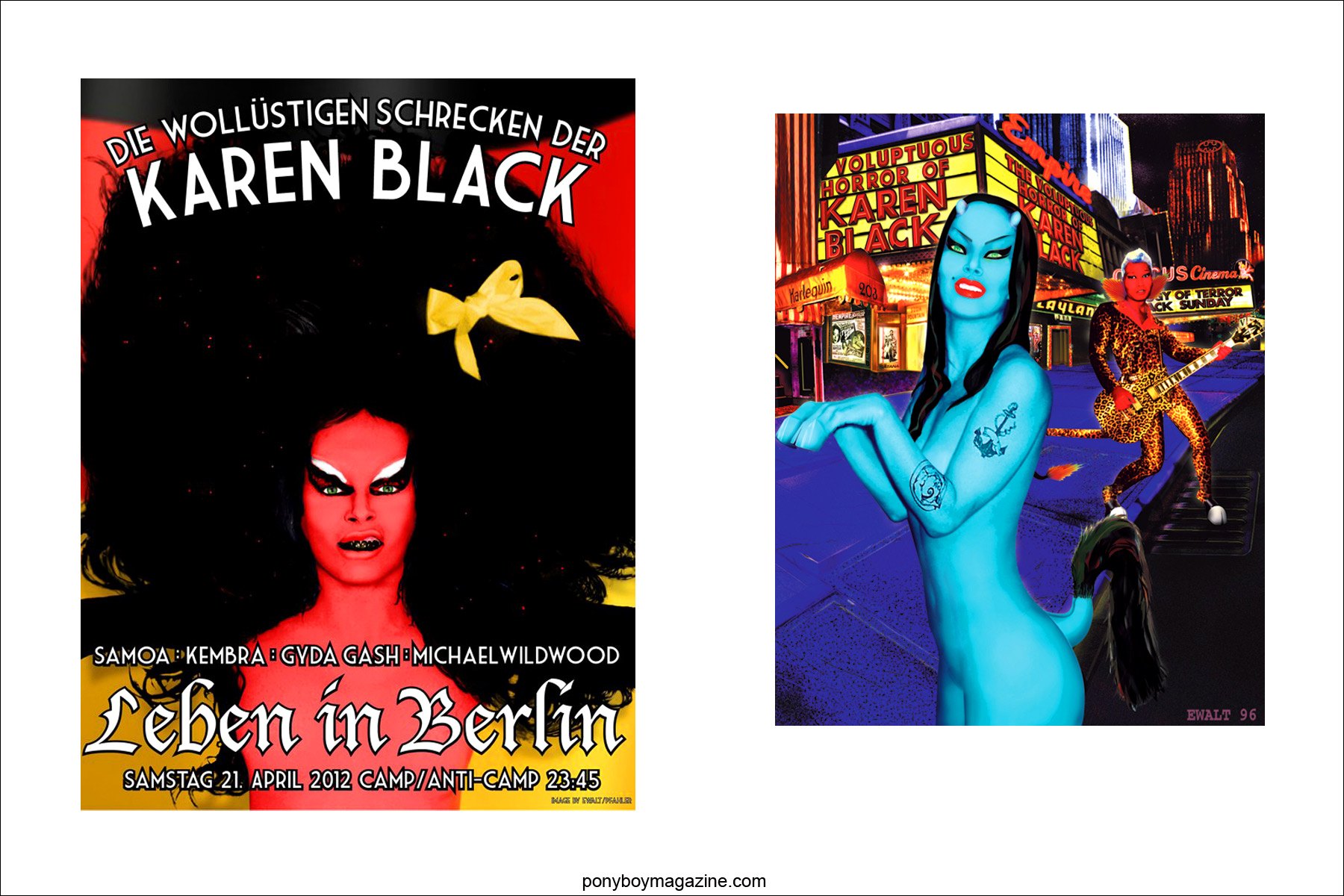 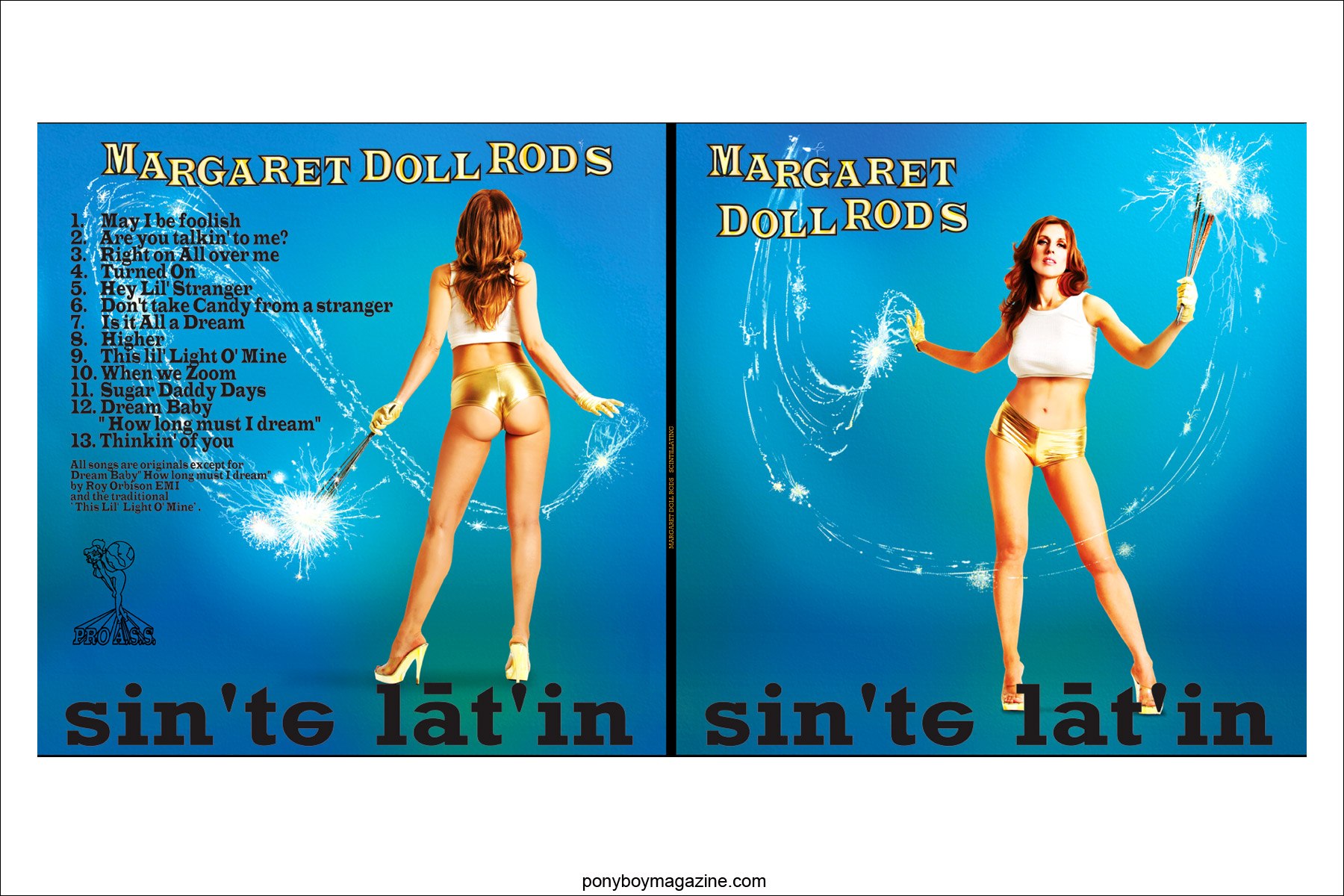 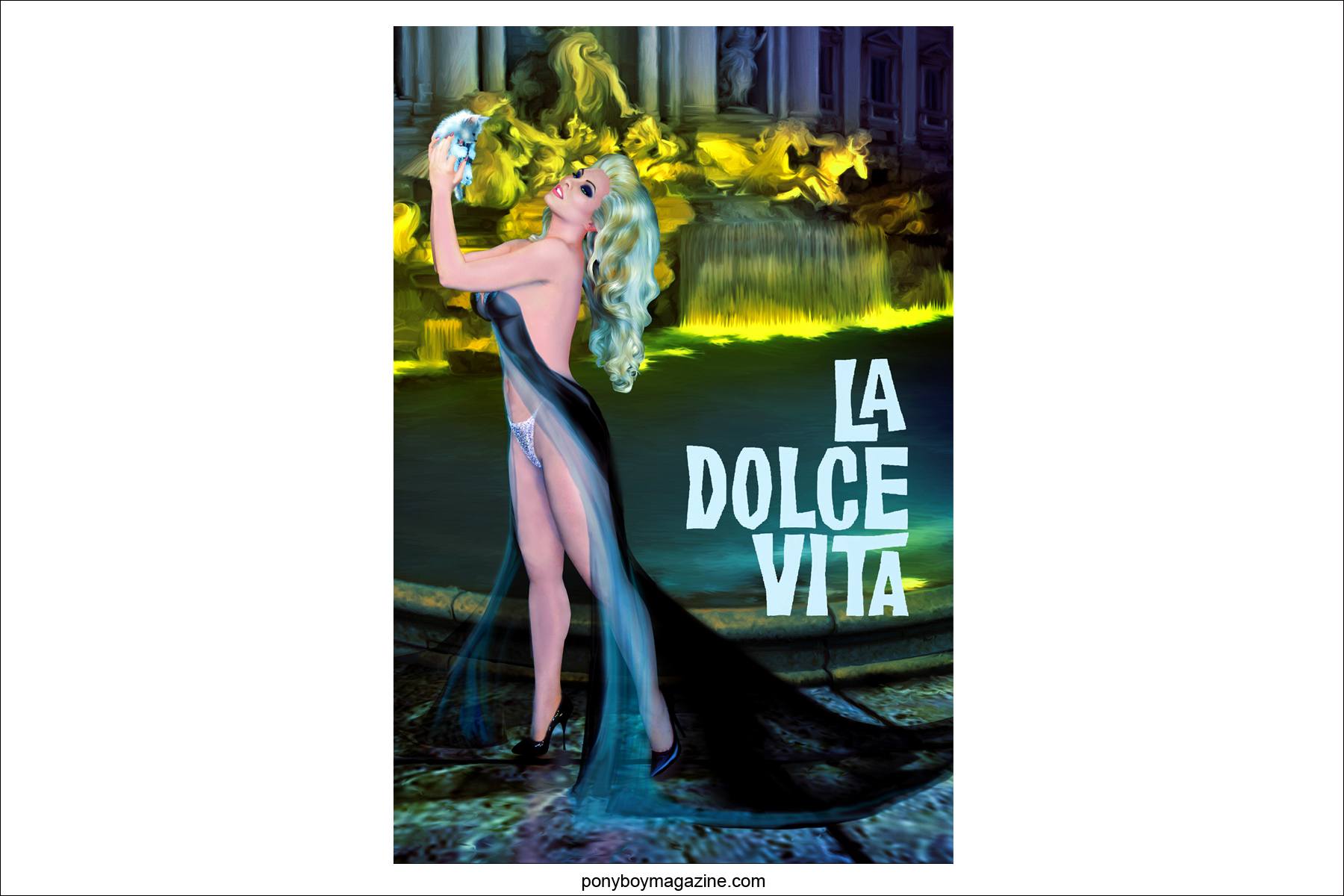 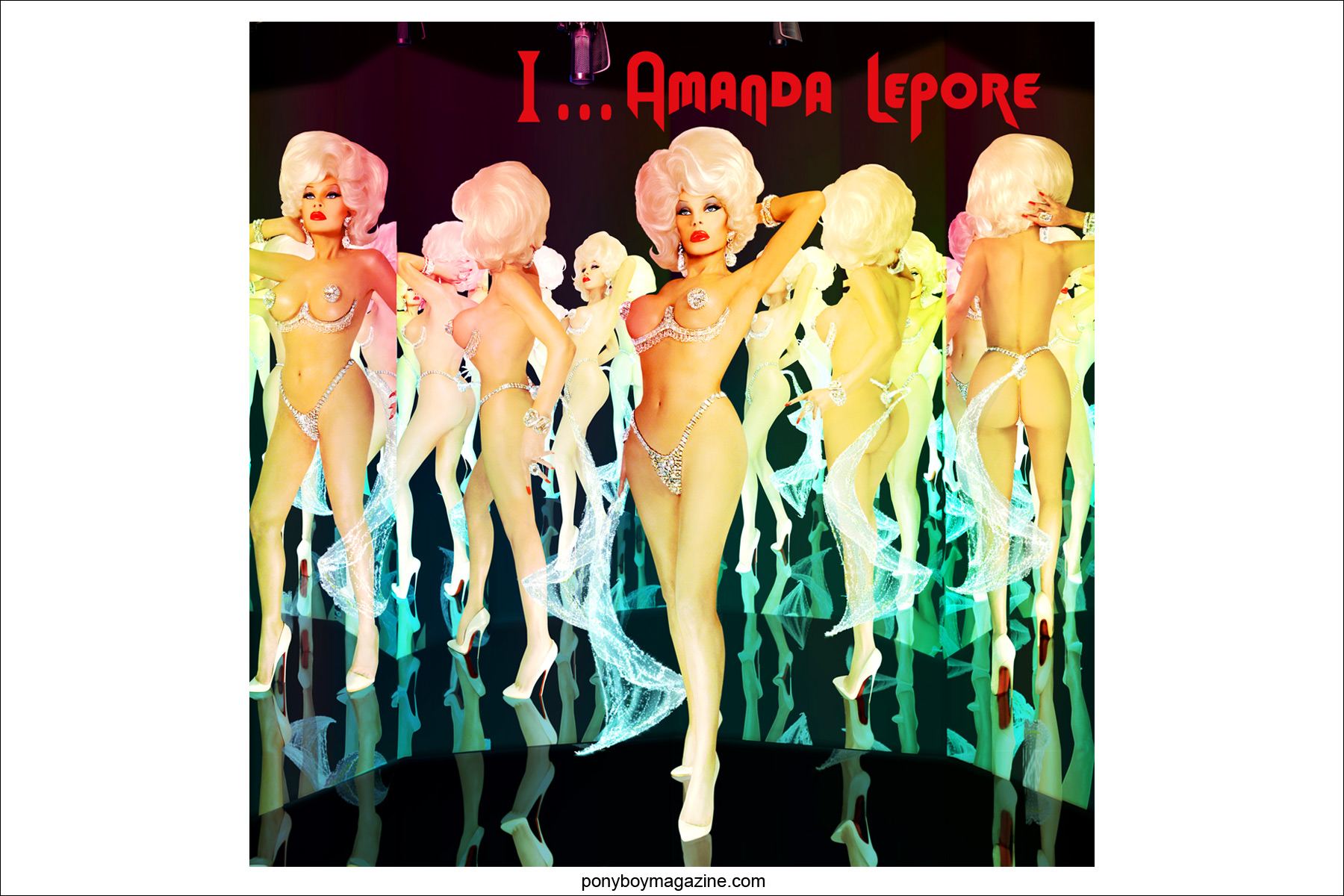 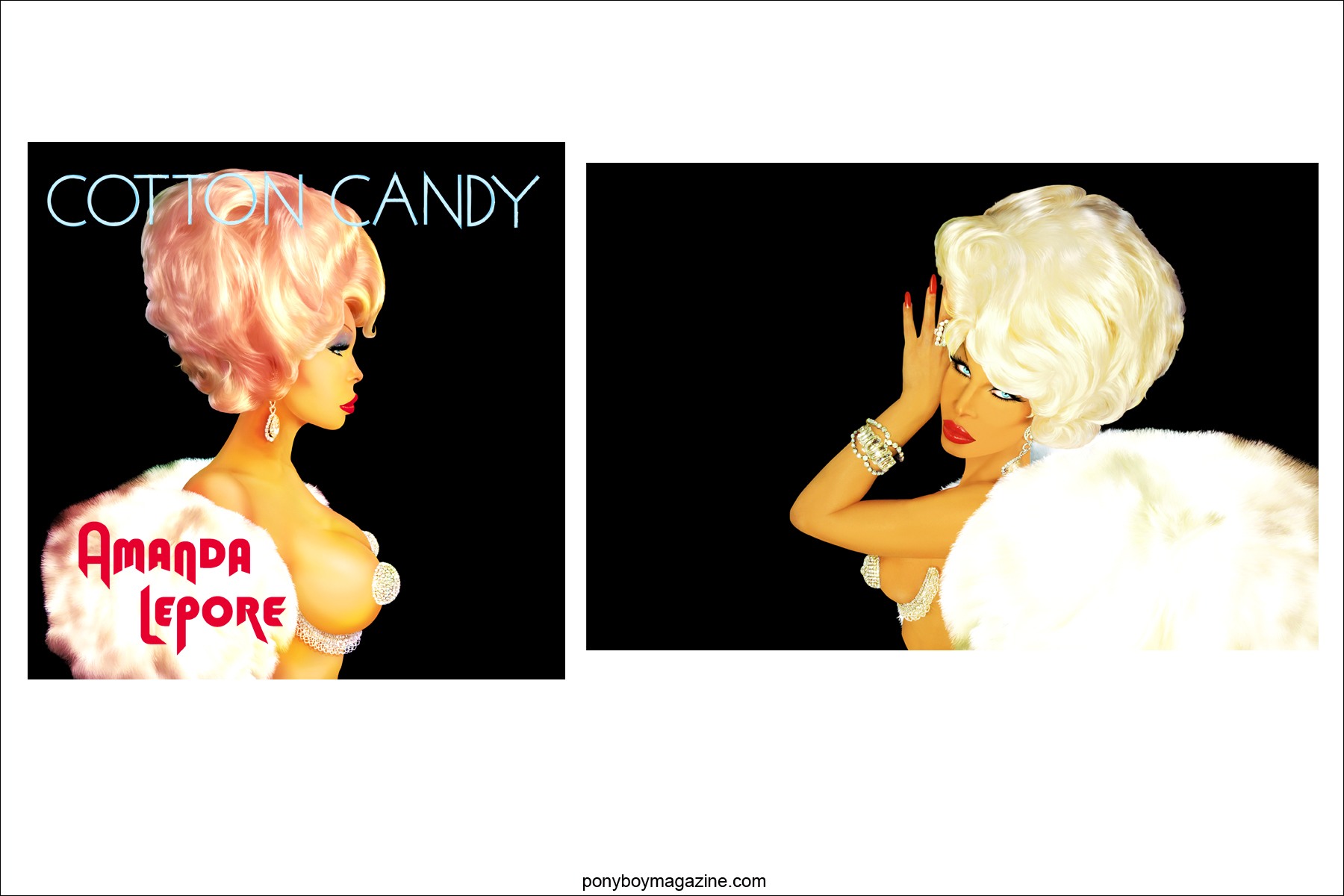 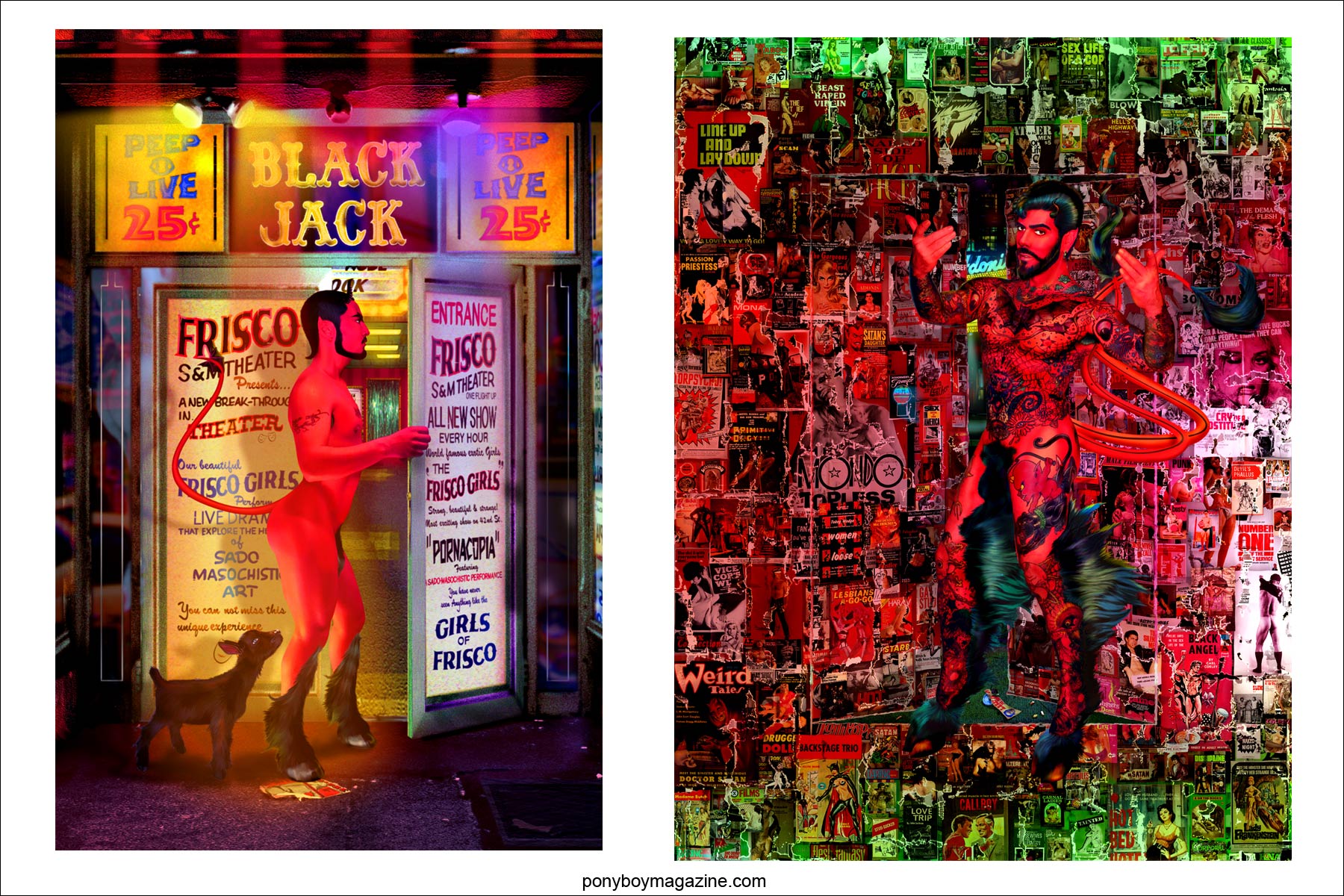 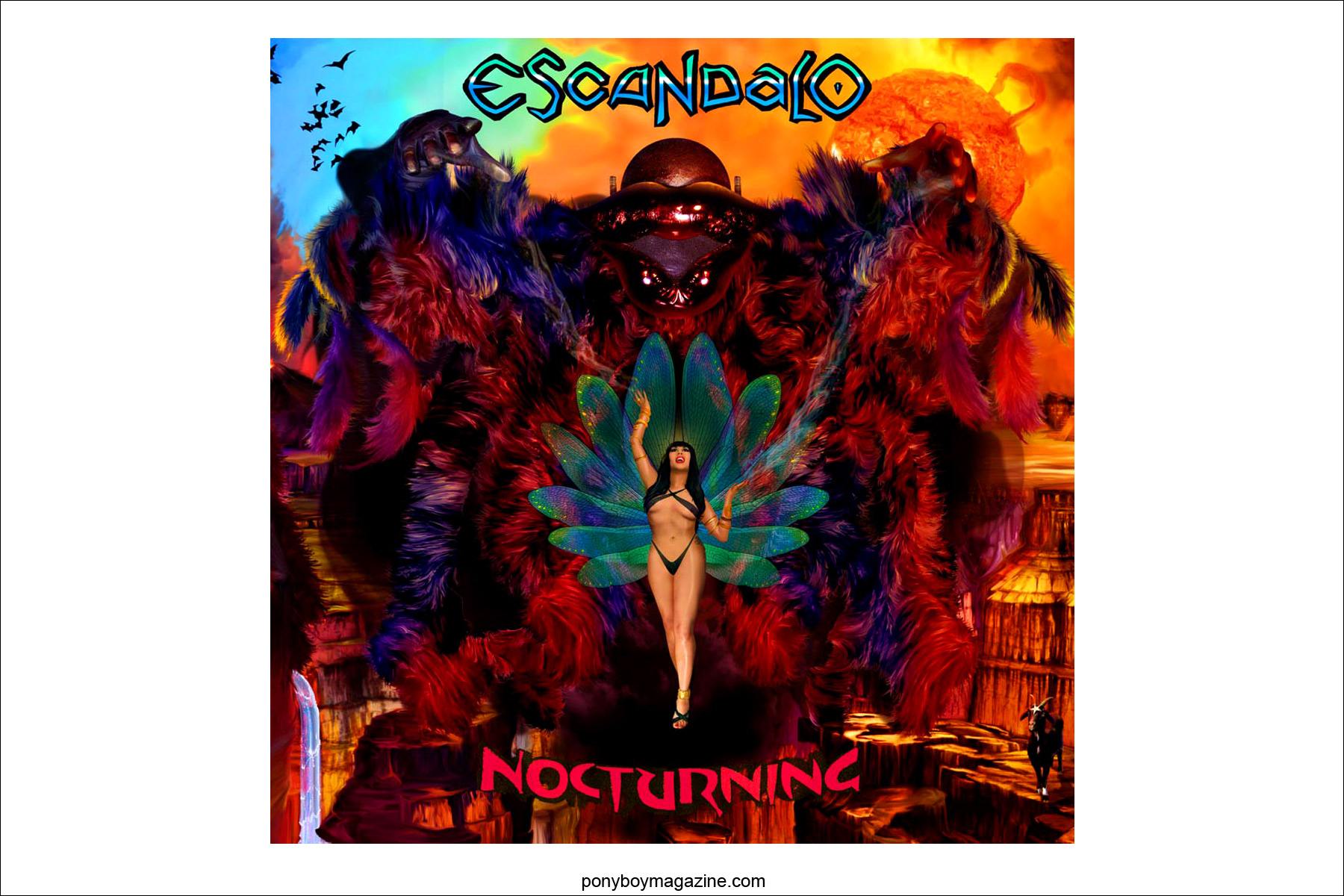 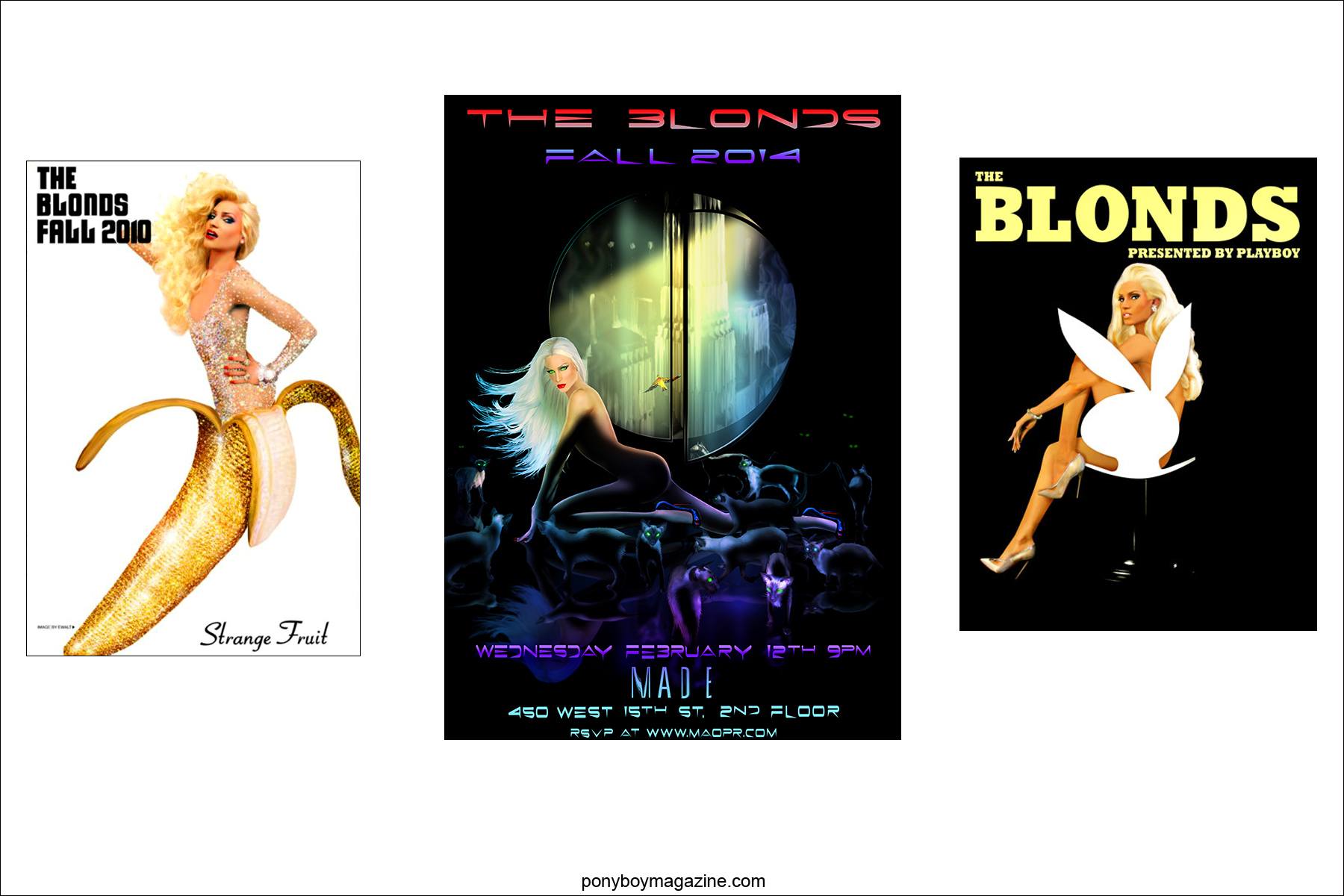 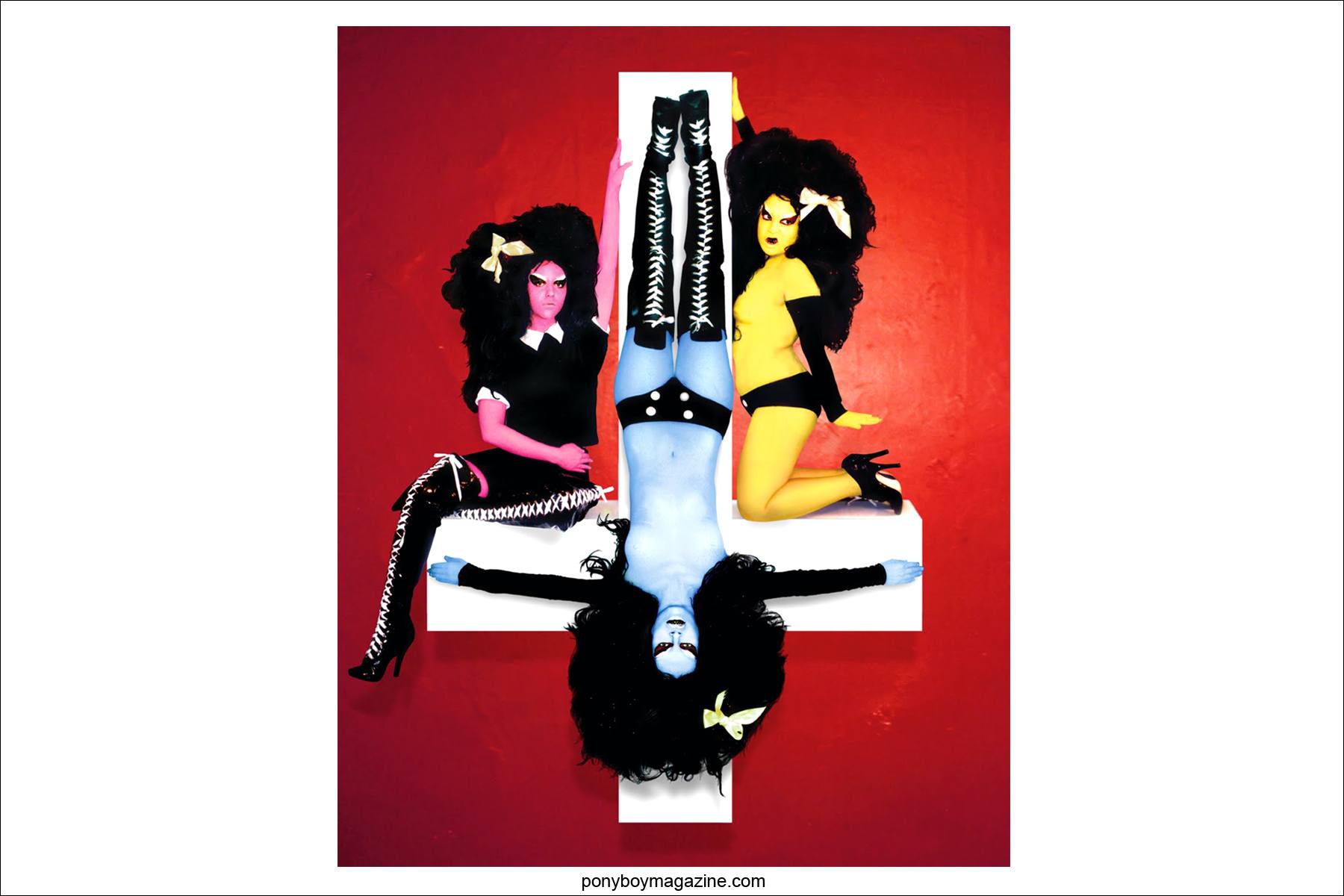 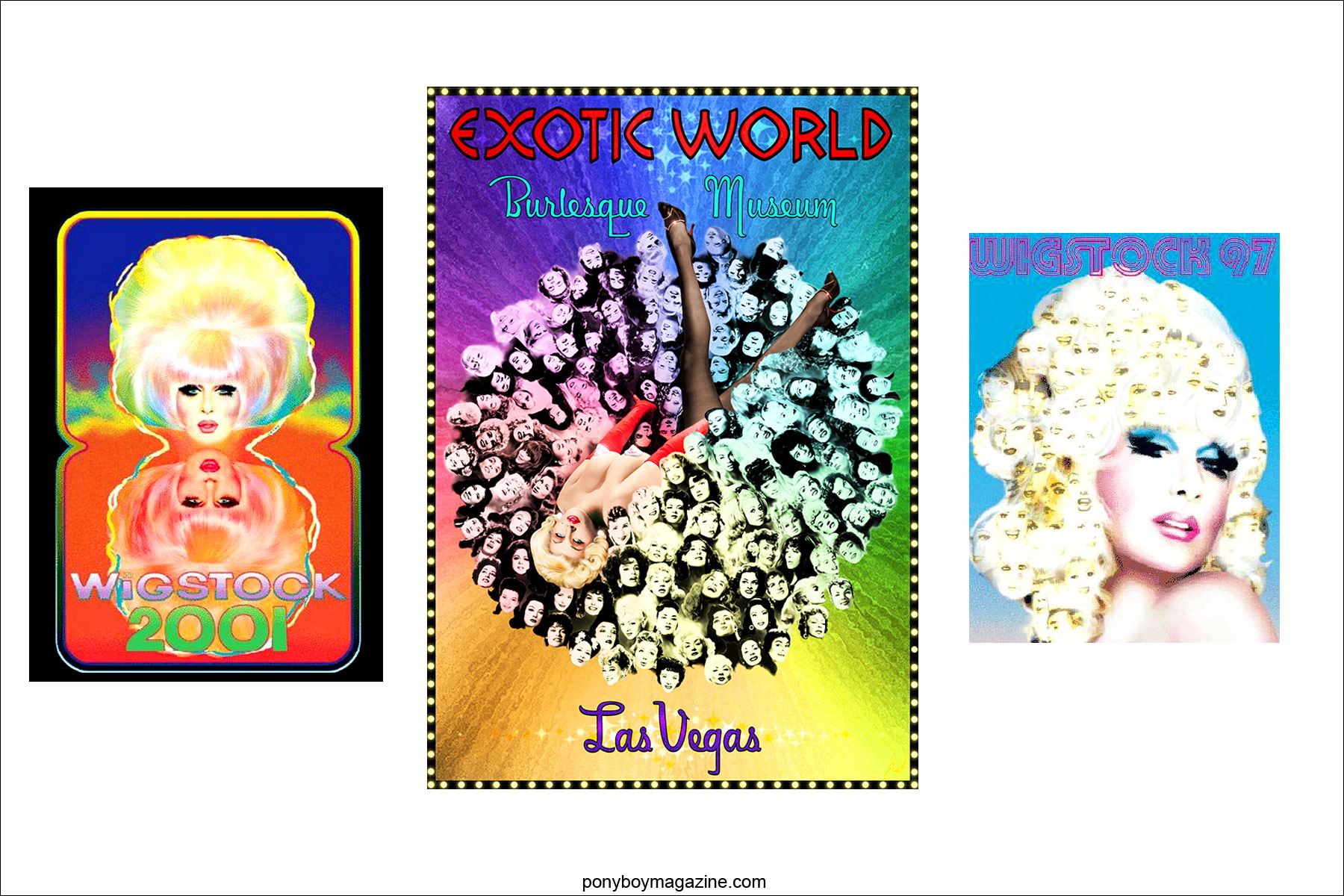 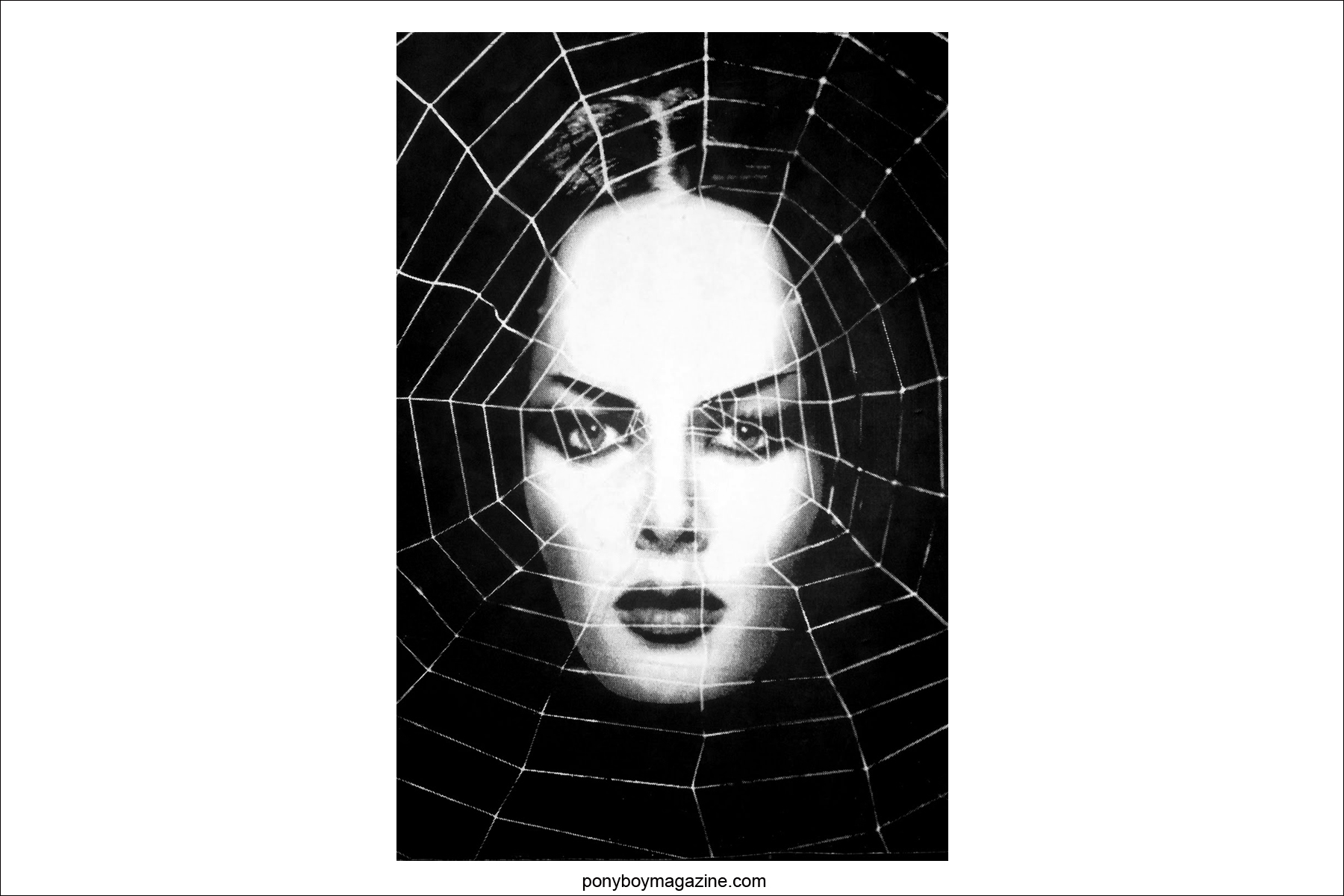 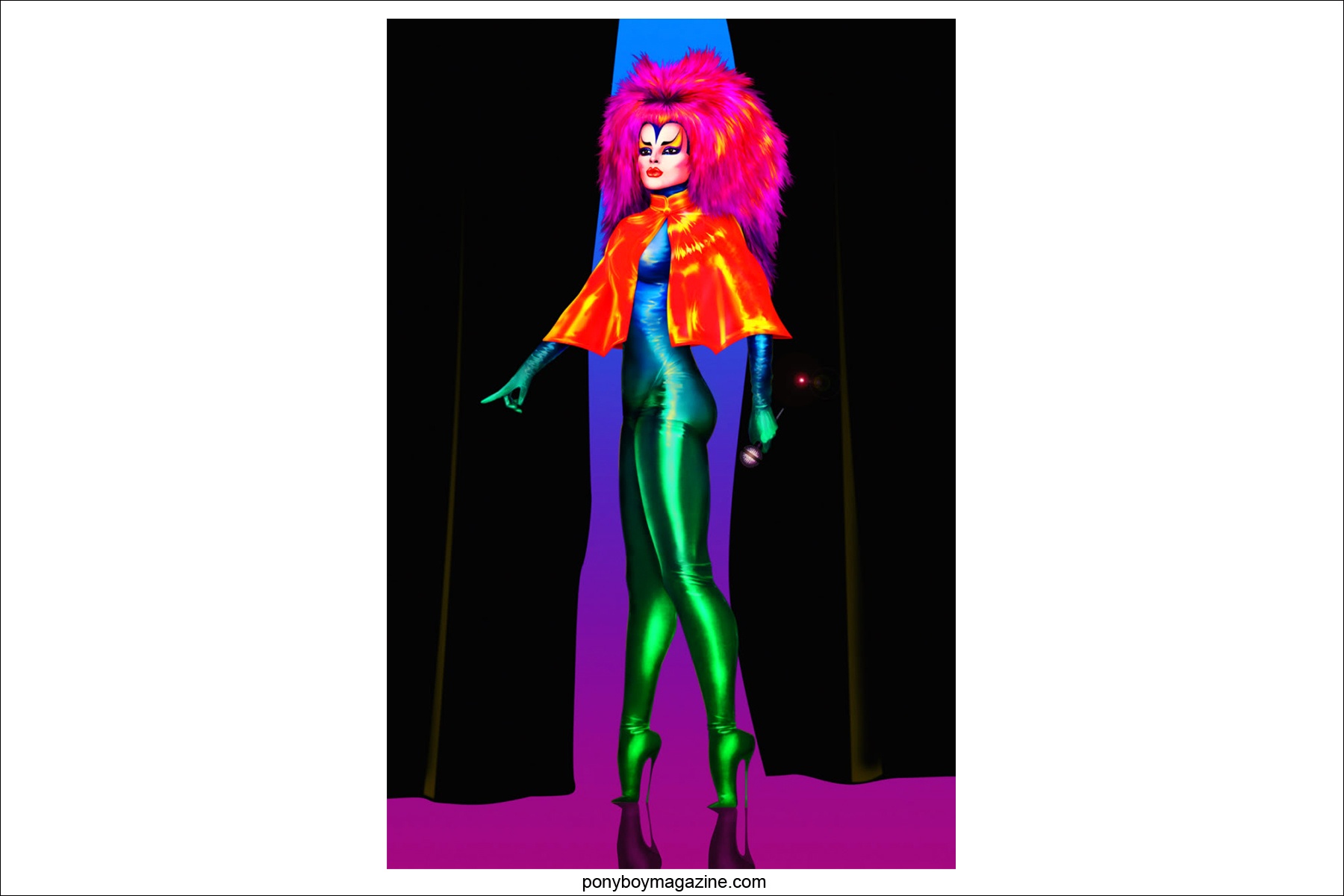 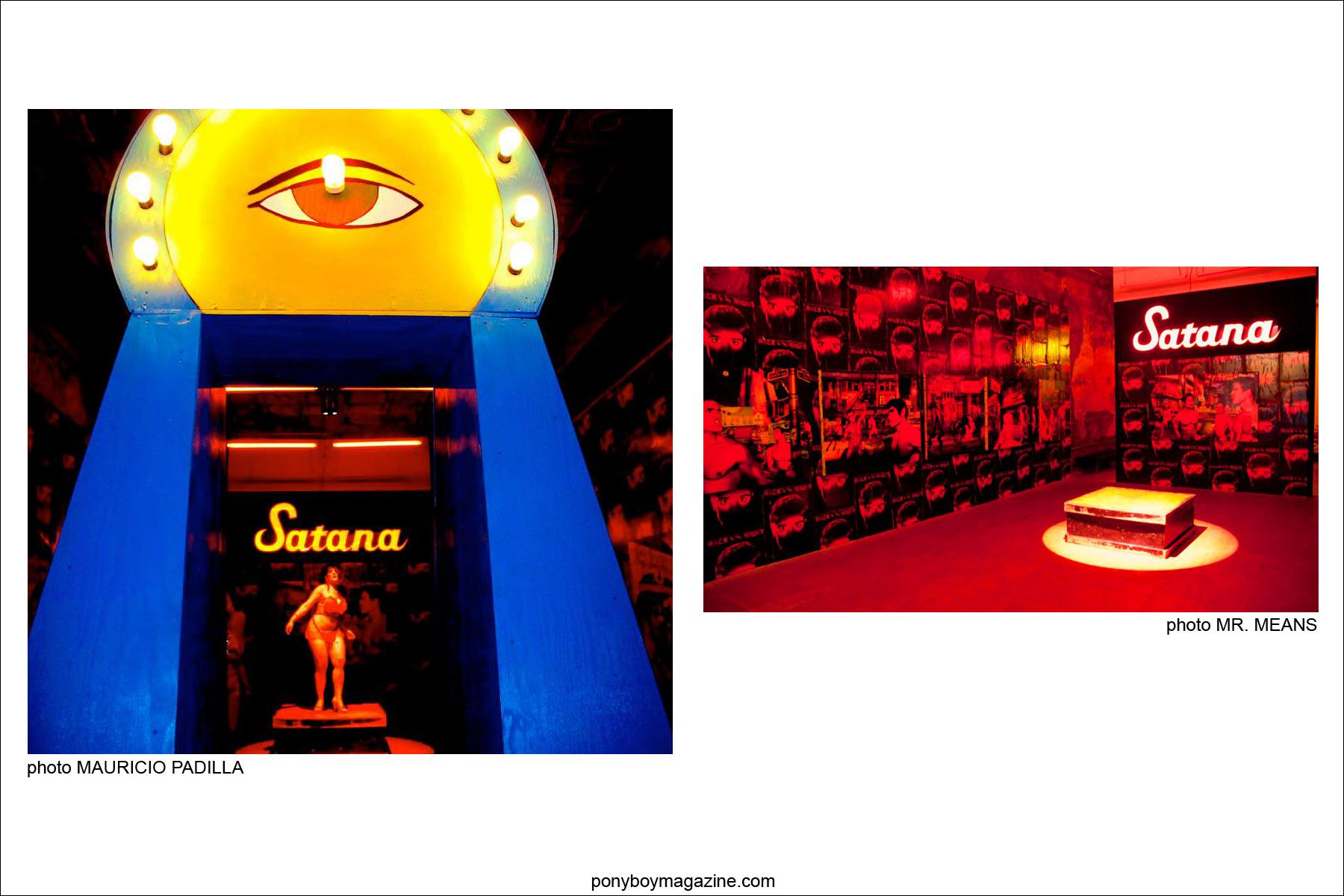 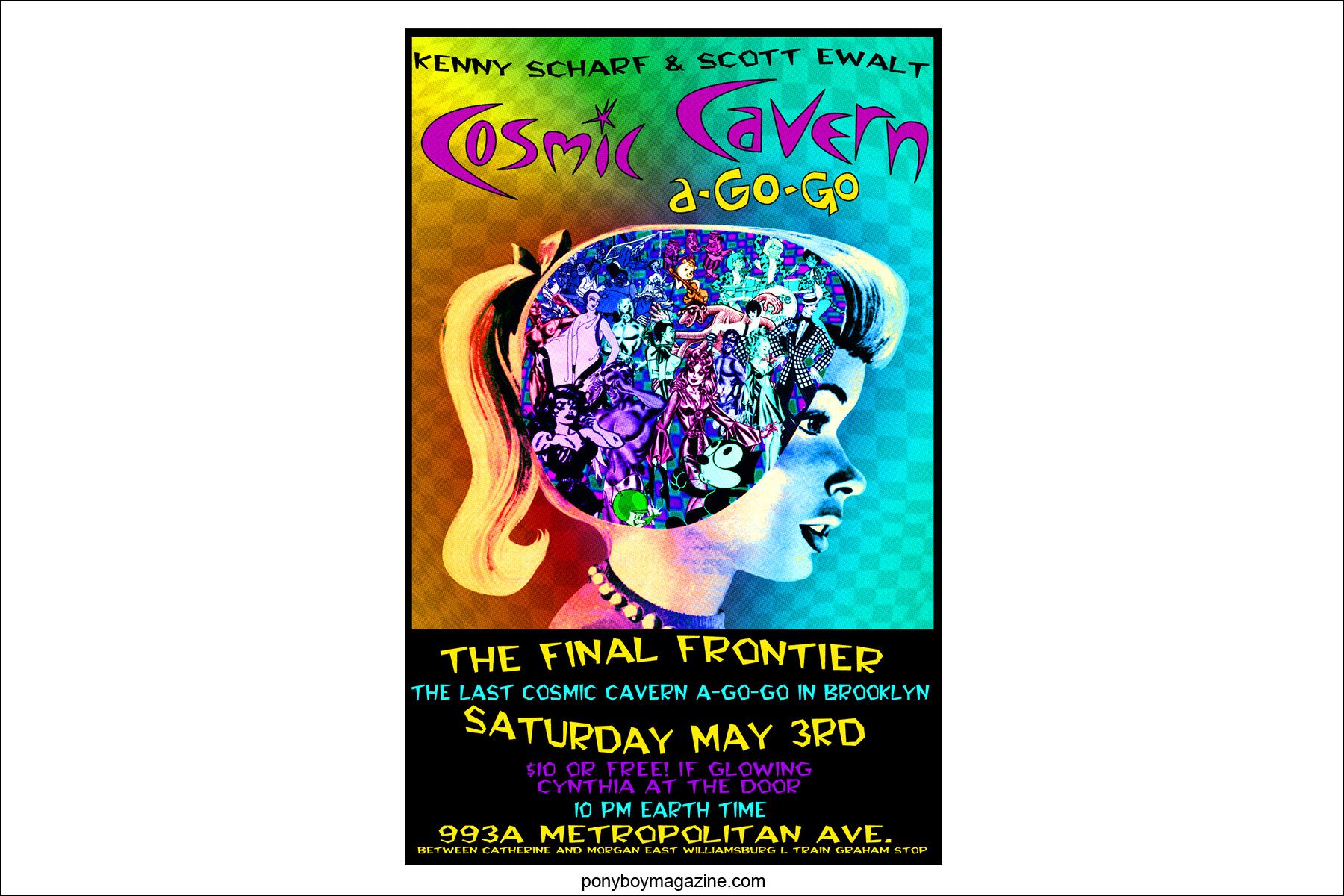 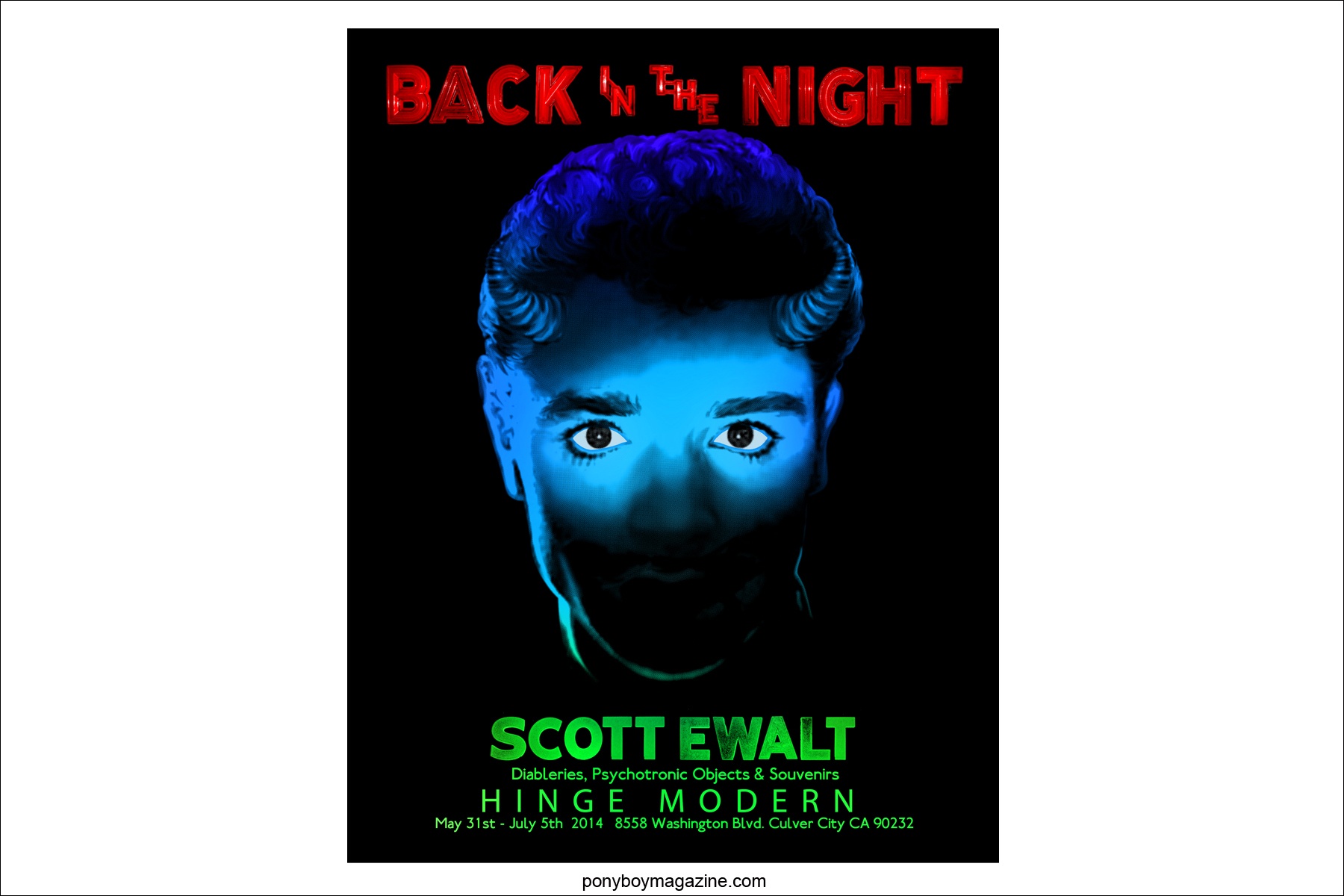 Talented New York artist and collector Scott Ewalt is enamored with the seedy and campy side of life, something that we at Ponyboy thrive on as well. Ewalt is a longtime dj, spinning at many of New York City’s trendiest clubs, events and fashion shows. His exhibit, dubbed Back in The Night, which originally ran over a year ago at Participant Gallery in New York, will make it’s debut on the West Coast. This extraordinary exhibit took over 20 years in the making and was well worth the wait. The inspiration is drawn from the old male revues and topless bars of New York City’s Times Square. Back in The Night at Hinge Modern in Culver City, California opens May 31st and runs through July 6th. An exhibit not to be missed!

PONYBOY:  Scott, please tell us where you were raised and when you moved to New York City?

SCOTT EWALT:   I was raised in Santa Cruz and San Diego. I moved to New York to go to college and to swim. Luckily, my best friends from home, Perfidia, Miss Lauren, Miss Guy, Todd Tomorrow, photographer Ron Bachman and a handfull of others moved here shortly after. So, we were a gang and all supported each other and collaborated, and still do.

PONYBOY:  We remember meeting you at a Maxi Records party in the early 90’s. You told us you went to Princeton and were friends with Brooke Shields. Ha!

SCOTT EWALT:  I’m almost sure we met earlier. I did go to Princeton with Brooke. We were friendly, but she knew my friends better. She was beautiful and super nice.

PONYBOY:  Did you study art in school? When did you decide to become an artist?

SCOTT EWALT:  I’ve been making images my whole life. I had done ads and logos for companies when I was was still in middle school and even earlier. I studied painting and architecture in school, which is why my work often includes buildings within a dreamy environment. It was an uphill battle, but after graduate school I really hung my shingle and took it seriously.

PONYBOY:  You were around in the Patricia Field scene in the 90’s as well. How did you meet Pat?

SCOTT EWALT:  I met Pat when Perfidia, Guy and Lauren started working at Pat’s store on East 8th Street in the Village.

PONYBOY:  Pat has always been a supporter of young artists. Did she buy your work?

SCOTT EWALT:  I did a funny window for Pat’s with Perfidia honoring Yma Sumac’s concert series when she came to new york. Yma came to the store and was very touched. Yma was on David Letterman and we were so proud of her. That’s when Pat and I started being friends. I started collecting Times Square signage and burlesque ephemera in the 80’s. And I bought the two marquee signs from the Venus. Pat is part Greek, so I sold her the second sign. She loved it so much she named her second store Venus. And I did the promotional artwork for the store. We’ve collaborated many times and she is always complimentary of what I make.

PONYBOY:  People constantly bitch about how New York has lost it’s edge, and artists are being driven out of Manhattan, etc.  What are your thoughts on the current state of the city, culturally?

SCOTT EWALT:  Everyone moves to New York wanting it to be the ideal of what they grew up with. New York is always in flux, so I don’t think anyone gets what they came for. But it also encourages people to change it themselves. New York is great when you’re young and that will always be true. It is true that a large number of artists have been pushed off the island by rents, but I still feel it’s just as inspiring as it ever was and as vibrant as you make it.

PONYBOY:  We also remember that you’re friends with 60’s model/icon Peggy Mofitt, the muse of the late fashion designer Rudi Gernreich. How did you meet? Are you still in touch with her?

SCOTT EWALT:  I met Peggy and Bill Claxton at a gallery opening for Steven Arnold. She liked the way I looked and said ‘Rudi would have loved you’. I told her I was a true fan of her and Rudi, and I was also a big fan of Bill’s LP covers for Chet Baker and other west coast jazz artists. I think they liked that I adored both of them equally. I had her come and lecture at UCLA and show the then rarely seen Basic Black film, which is seminal. We remained friends until I moved back here.

PONYBOY:  You also have a close friendship with pop artist Kenny Scharf. How long have you known him for?

SCOTT EWALT:  We met from Joey Arias, and were immediatley like brothers. He is the nicest guy in the universe and has been a solid and constant catalyst. We are doing our last Cosmic Cavern a Go-Go party on May 3rd. It’s a dayglow psychedelic love fest, not to be missed.

PONYBOY:  Tell us about your art. What really inspires you?  What makes you get up in the morning and work till the wee hours.

SCOTT EWALT:  I’m very inspired by the history of punk from 19th century diablerie artists and goth night clubs, victorian male burlesk, the surrealists of Paris in the 20s, Berlin’s wild boys in the 30’s, burlesque/vaudeville/variety/road show culture in the 40’s, the great bondage illustrators, the Ed Wood gang, Screaming Jay Hawkins and Little Richard from the 50’s, the vox drenched punk bands like The Music Machine, The Sonics and garage bands from the 60’s, the glam culture of Lou Reed, Iggy Pop, and The New York Dolls. along with airbrush art and photorealism from the 70’s – and especially the way bands like The Cramps, Plasmatics, Soft Cell and The Misfits reintroduced it all for my generation. I like some high art but I’m equally inspired by forgotten psychotronic filmakers and artists. I’ve been lucky enough to meet many artists here that live it, and that inspires me the most.

PONYBOY:  How would you describe your art? And who would you say your typical client is?

SCOTT EWALT:  I guess the underlying element is inversion, which is not what the high art world likes right now. They reward for making the beautiful ugly and vague abstraction. I lived through some dark times culturally here, so my art makes the unsavory celebratory, and is never vague. For me, the real punk is to do something very difficult and complicated and to make my ideas clear. My typical collector likes my work for the endurance and discipline.

PONYBOY:  You recently had an amazing solo exhibition here in New York with great reviews. And now you’ll be moving this exhibition to Los Angeles?

SCOTT EWALT:  Thanks. I’m very excited about going back to California. I love the culture. I have some amazing friends there and have a good feeling about it. I’m being shown at Hinge Modern, which is the perfect place for me.

PONYBOY:  And finally, tell us about your fascination with Russ Meyer, your old sign collection, and your extensive tee shirt collection.

SCOTT EWALT:  Well, I love punk culture. I love Roger Corman, Russ Meyer and Ted V. Mikel’s films. They were the punks of Hollywood. I also love strippers and burlesque, both female and male. I especially like Russ Meyer because he united burlesque and filmaking from the beginning. I also like real people cast as they are. He and Fellini were both doing this long before Warhol. So his films are the best eye candy and I love all his women. Meyer’s paramour/muse, Kitten Natividad, is a close friend. And I have also had friendships with Tura Satana, Haji, Raven de la Croix, and Cynthia Meyers. I love burlesque signage for many reasons. They were basically discarded until very recently, which made them easy to collect. I love the way they elude to sex and subversion in a playful way, aren’t vague, and are made with great skill. I love that Times Square sexuality and its culture was microcosm. I started collecting t-shirts for a few reasons. Out of shyness, I liked how they spoke for me and they are the only thing that fit my lanky torso. But most of all, I love that they are Warhols for your body and only get better with age and wear. I have about 1000 original strip club and punk shirts. For my show I recreated 10 shirts from adult businesses that probably had them, but I’ve never found. This is a unifying theme with all my work.