We first met a young Brian Hurd (a.k.a. DADDY LONG LEGS) at a rooftop barbeque in Astoria Queens roughly 20 years ago. Brian was a somewhat shy individual at the time, a transplant that really stood out in our minds. In conversation he seemed eager and excited to be a working musician in the grind and hustle of New York City. We didn’t see much of him after that, until about 10 years later when we ran into him at a party in Williamsburg, Brooklyn. Brian seemed as though he had sprouted 10 feet, and was easily the center of attention of a gaggle of very pretty, young ladies dressed in 60s/70s attire. We spoke briefly, but it wasn’t until a year or so later that we saw him as we were exiting a Jonathan Toubin Halloween party at Don Pedro’s in Brooklyn. Brian insisted on playing his harmonica for us. We were quite blown away at both the talent and determination that he had playing that damn piece of metal.

Since then we’ve watched the birth and evolution of a band that formed 10 years ago named DADDY LONG LEGS, which Brian co-founded with DJ Josh Styles and Murat Aktürk. All three musicians are predominantly dressed in black while performing, visually stylish in a retro sort of way. Attendees of a DADDY LONG LEGS show experience a bluesy and powerful lo-fi trip, like nothing else we’ve ever witnessed before. What’s really unique about this trio is that they’re not only a group of talented musicians, but they’re also very electrifying “entertainers”. Brian stands tall and confidant onstage, giving off southern evangelical preacher vibes. He mixes his stage shows up by alternating between his harmonica and guitar, and at times he’ll even play both simultaneously. Josh Styles wears oversized vintage sunglasses, while guzzling cans of beer and beating his drums. Fans eagerly await his mid-to-end-of-show shenanigans that take him front of stage with drum and drumsticks in mouth for a pounding, exhilarating moment. Murat is the stylish rock ‘n’ roll guitarist, looking as if he leaped off a 1970s CBGB’s era album cover. We just love this band. Read our interview below with Brian Hurd, synching in with the re-release of Lowdown Ways on YepRoc Records.  Photography Alexander Thompson.

PONYBOY:  DADDY LONG LEGS is unique, unlike anything that we’ve ever seen before. When did you start the band?

DADDY LONG LEGS:  It’s a little blurry now, but I believe we were officially conceived in 2010. I was playing my harmonica on the streets and at house parties and that quickly evolved into a duo with our guitarist Murat Aktürk. Not long after that, our drummer Josh Styles heard what we were doing and put a beat to it! 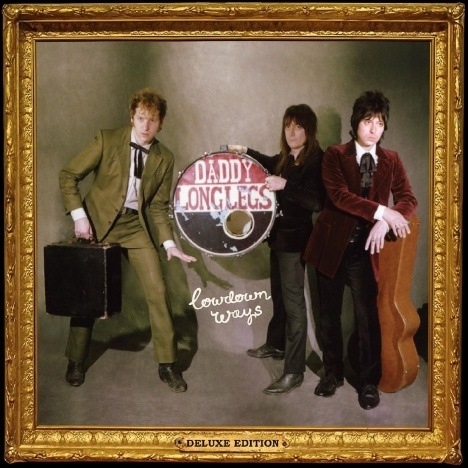 PONYBOY:   Tell us how the three of you met?

DADDY LONG LEGS:   Well, we were already old friends by the time we started DADDY LONG LEGS. We knew each other from our previous bands that were playing around the Lower East Side at the time. I used to go see Josh deejay at his monthly dance party, SMASHED BLOCKED, and Murat would be there hangin’ out, looking sharp as usual. A lot of those nights ended back at their apartment ’til the wee wee hours, where we were bonded over blues and booze!

PONYBOY:   We’ve always loved the name DADDY LONG LEGS for a band. Where did it come from?

DADDY LONG LEGS:   It’s a high school nickname that stuck. Later on when we were looking for a band name that one seemed like the natural choice and was in the spirit of the razor sharp bluesmen that we idolize.

PONYBOY:   You have three studio albums, one live album and various singles. Your most recent record, Lowdown Ways, was just re-released as a deluxe edition. How is this version different from the first release a year ago?

DADDY LONG LEGS:   It’s the exact same record, but this time the folks at YepRoc Records have included three previously unreleased bonus tracks: “Off My Rocker”, “Blind Chicken” & “Money (Talks Like A Man)”, co-written with our pal, Jake La Botz.

PONYBOY:   “Winners Circle” is a favorite of ours from the album, with a raw somewhat 70s rock ’n’ roll feel. The lyrics for that song almost seem reflective of DADDY LONG LEGS as a band, being outsiders in an overly produced, mainstream music world. Is this correct?

DADDY LONG LEGS:   You nailed it! As a matter of fact, when we were writing songs for the album and we came up with something that we thought was a strong track we’d put it in what we called the “Winners Circle”. Well then, of course, Winners Circle had to become its own song and we all know what that’s about cuz we have lived it! 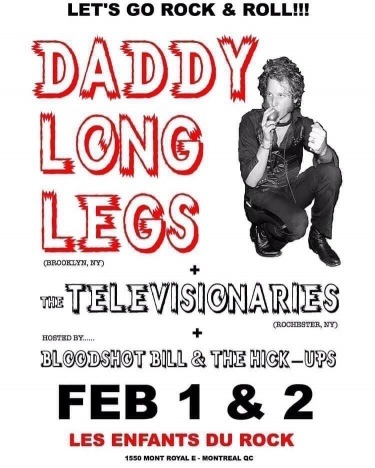 PONYBOY:   “Célaphine” and “Begone” are both songs on the record where the harmonica is really dominant, front and center. One thing we’ve always been curious about is how harmonica playing evolved in your musical career?

DADDY LONG LEGS:   I keep it raw but my tone is always getting bigger and my phrasing more melodic. Our recent recordings are more versatile between the amplified blues harp sound and that lonesome acoustic tone. I really love playing both of those styles and am always learnin’ and evolvin’ as a bluesician.

PONYBOY:   The great Jimmy Sutton produced this record. How did that come about? Did you guys know each other beforehand?

DADDY LONG LEGS:   We didn’t know each other personally, but we were hearing all the amazing stuff coming out of his Hi-Style studio and loved the sound. We did have a lot of mutual friends and eventually connected here in New York. That turned into a writing session in Nashville and then the recording took place in Chicago, with Alex Hall engineering the album.

PONYBOY:   Jimmy and his Hi-Style studio put out such spectacular rock ’n ’roll records with that fantastic throwback, lo-fi sound. The outcome of the recordings have such a raw and unfiltered sound. When a listener puts the record on, one really feels as if they’re front and center at a Daddy Long Legs show. We’d say this is a success. What was it like working with Jimmy? And what was the recording process like?

DADDY LONG LEGS:    Jimmy is very meticulous and wants to get everything just right. He’s become like a big brother to me. The actual recording was a lot of work, but also a lot of fun, and we made some memories and accomplished what we wanted in the end.

PONYBOY:   We love the video for “Pink Lemonade”, starring Lucille. Who directed it and what was the direction behind it?

DADDY LONG LEGS:    We wanted this video to reflect the urban side of our aesthetic. I wrote the synopsis for the video and we got Ryan Weibust from Unproduction who we worked with before to direct it. We filmed it on the streets of Brooklyn in one night.

PONYBOY:   We also were in awe of the Lowdown Ways trailer, especially in the beginning – the three of you all dressed in black, walking and stomping. It makes us think of a 60s/70s western. But we’d have to say that our favorite DADDY LONG LEGS video is “Bourgeois Blues”. It really feels like an old reel that was salvaged from the 1930s or 40s, raw and with the dancing skeletons superimposed. And, of course, you playing guitar with the harmonica sticking out of your mouth is so incredible! It’s a work of art. Who directed that and how did the concept come about? 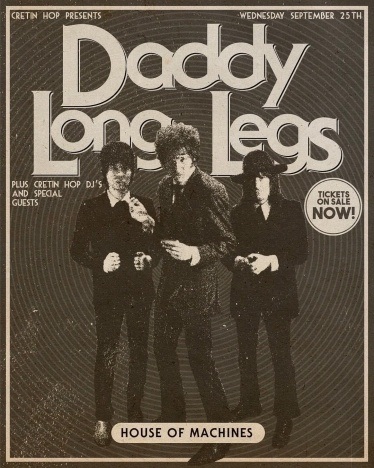 DADDY LONG LEGS:    That’s an oldie, but a goodie. It was a no budget video done in Miss Fancy’s living room. It was her idea to use old cartoons from the public domain. The Lowdown Ways trailer was filmed in January in 20 degree weather and we almost froze to death, but that’s the sacrifice you make for your art. Ha, ha!

PONYBOY:   The visuals of the band, the style of dress, primarily all in black, with hints of western 70s mixed with Teddy Boy references is quite alluring. And we’ve always agreed that visuals are an integral part of a musician’s or band’s makeup. What inspires DADDY LONG LEGS, as far as style?

PONYBOY:   What musicians would you say have been the most impactful or influential to DADDY LONG LEGS’ music?

PONYBOY:   Are there any modern day musicians that you would you love to collaborate with on a song or project?

DADDY LONG LEGS:   Not really, but I am honestly blown away by how much truly great music there is happening out there right now. If you think there’s nothing original under the sun, you’re looking in the wrong place. Rock ‘n’ Roll is alive and well, people. Believe!

PONYBOY:   Who are some of the local NYC bands that you guys like to watch and perform with?

DADDY LONG LEGS:   That comes down to individuals more than bands these days. Cats like Blind Boy Paxton and Harlem Slim, and, of course, we always continue to do events with DJ Jonathan Toubin. As far as bands go, I have to mention The Nude Party, Mystery Lights, Baby Shakes, The Trash Bags, Miranda & The Beat, the list goes on. It was a good time for music in Brooklyn until this coronavirus happened…

PONYBOY:   We’ve seen the progression of your stage shows, as we’ve been there since the beginning. Your performance as the frontman has hints of almost a deep-south Pentecostal pastor. It’s very impactful. 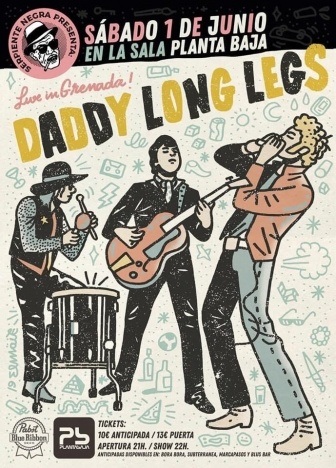 PONYBOY:   Josh Styles is a madman drummer and his unique live antics at front of stage are always so amusing. The combination of the three of you is such an enticing show to watch. Looking back, where would you say the best DADDY LONG LEGS shows with the most receptive crowds have been?

DADDY LONG LEGS:   Spain, England and Ireland. Also, our hometown shows are always good, but we put the same energy out there no matter where we are.

PONYBOY:   You guys are known to tour quite extensively. And more recently we remember a big UK tour back in January/February. Do you feel that DADDY LONG LEGS is well-received overseas? Would you say you have a better following in Europe?

DADDY LONG LEGS:   Yeah, but that’s true for most American bands. They have a deeper appreciation for our music and it’s an honor to bring music that’s connected to the source to those people. It’s tougher in the states because it’s such a vast country. And let’s face it, we’re not playing pop music!

PONYBOY:   What’s life like for the three of you now with the coronavirus? Are you writing songs for the next record? Tell your hungry fans when we can expect to see the next project drop?

DADDY LONG LEGS:   It’s a big change for all of us. It’s hard to come to a full stop after living on the road for so long, but this is what it has come to. We’re anxiously awaiting our return to the stage, but until then we’re stayin’ put and writing tunes for what will be our next YepRoc Records album due out in early 2021. Stay tuned!