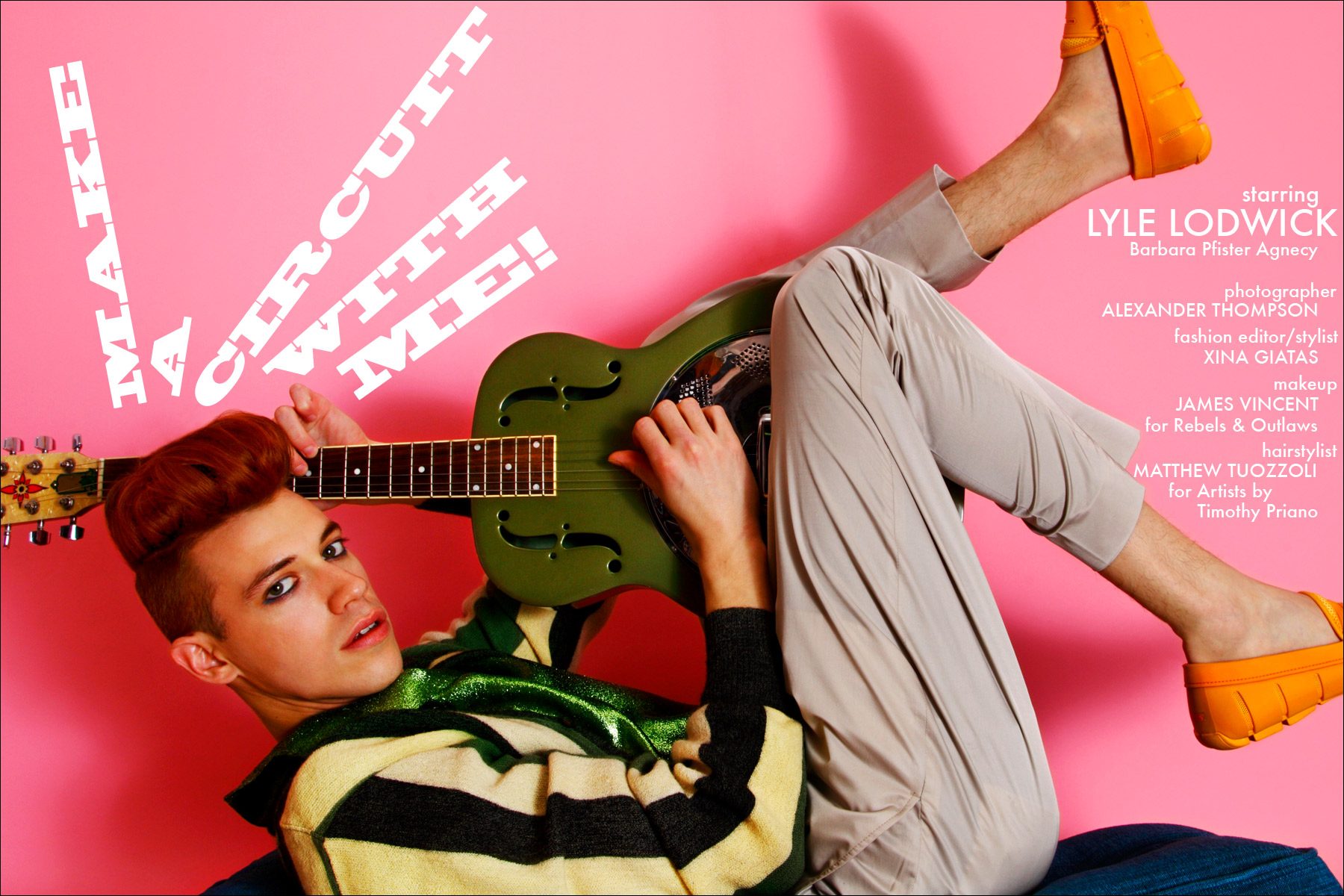 For our latest men’s Spring editorial, we really didn’t want just another pretty boy, as our style inspiration for this spread was based on Tim Polecat, the iconic frontman for 80’s neo-rockabilly UK band The Polecats. So, model Lyle Lodwick was the perfect fit for this shoot. We’ve long been fans of Lyle with his characteristic quirky good looks, reminiscent of a young Johnny Lydon or Duckie from Pretty in Pink. Lyle’s modeling career has been quite extraordinary with campaigns for designers including Marc Jacobs, Costume National, Balenciaga, Sisley, Barney’s and Uniqlo. He has also been featured in numerous high-end editorials for various international fashion magazines. Lyle has his own unique personal style and is also a very talented musician, as a member of the New York band Shining Mirrors.

Fashion editor/stylist Xina Giatas mixed colorful vintage pieces along with key items from some spring menswear collections, including Duckie Brown, Antonio Azzuolo and Maison Kitsuné. Our beauty editor James Vincent gave Lyle a hint of a colorful 80s new wave eye using Ardency Inn cosmetics. Hairstylist Matthew Tuozzoli had his work cut out for him. Lyle showed up with chin length hair, so getting that perfect pompadour was a bit of a challenge! But we were thrilled with the results. Read our interview with Lyle below. Photography Alexander Thompson.

MAKE A CIRCUIT WITH ME! 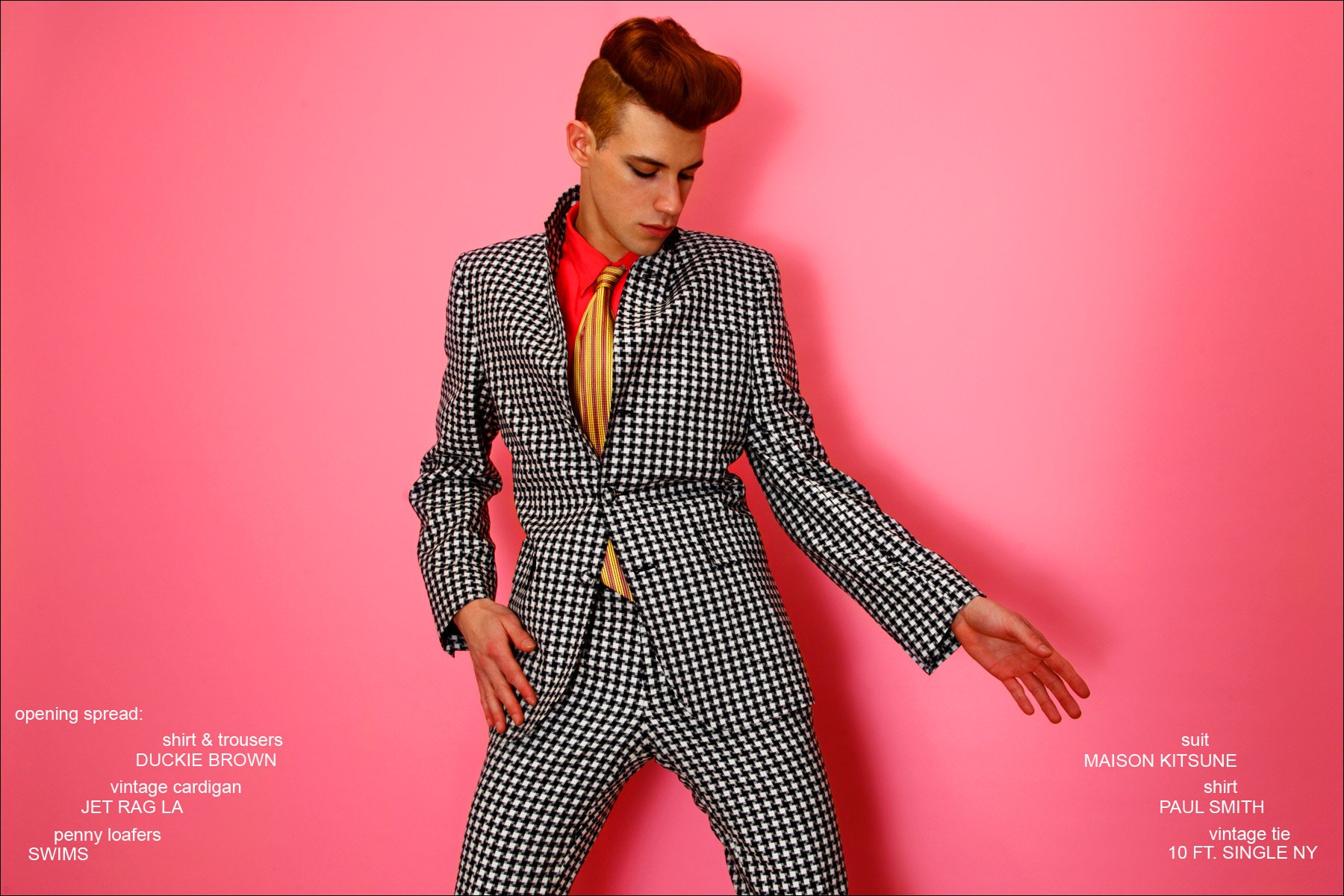 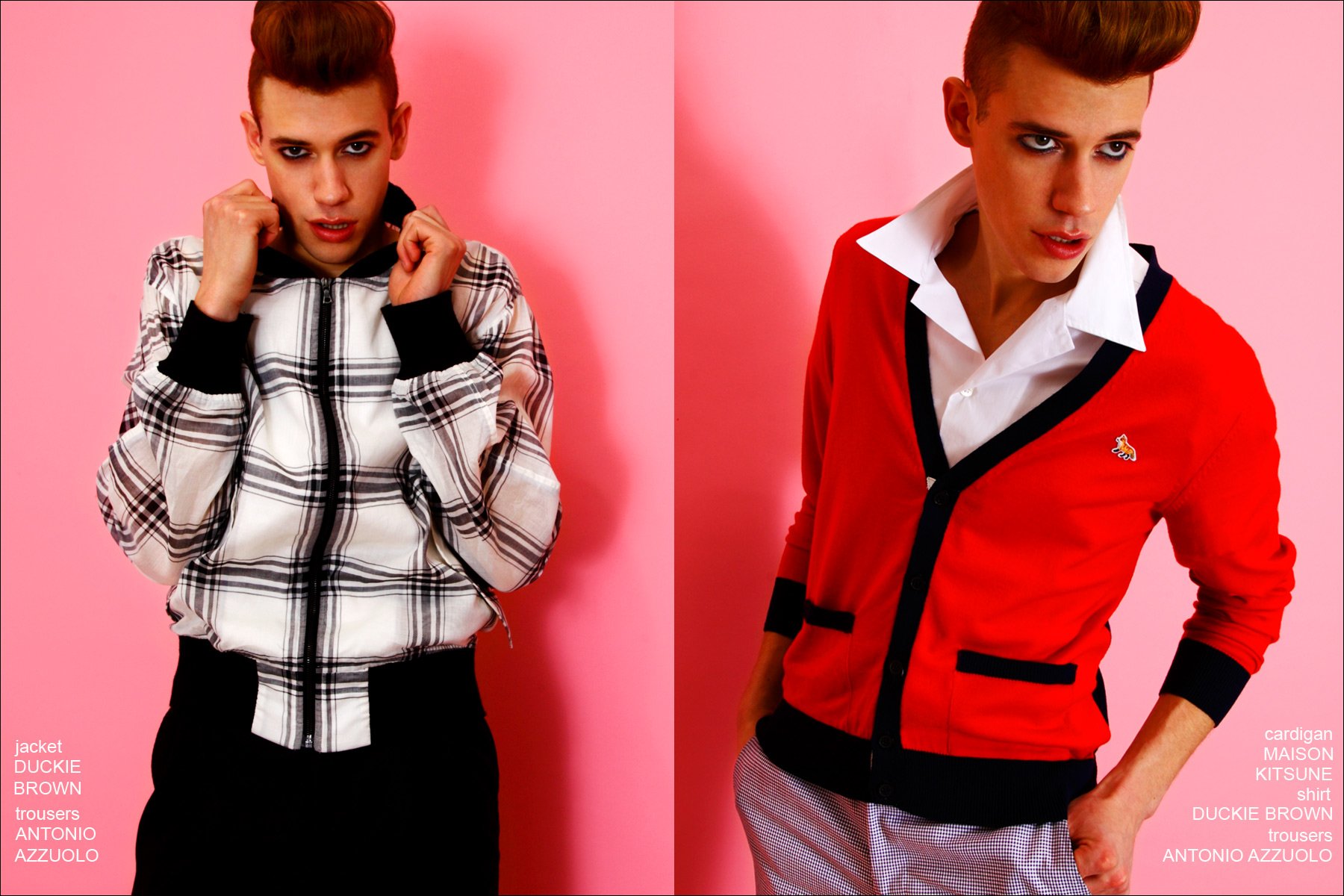 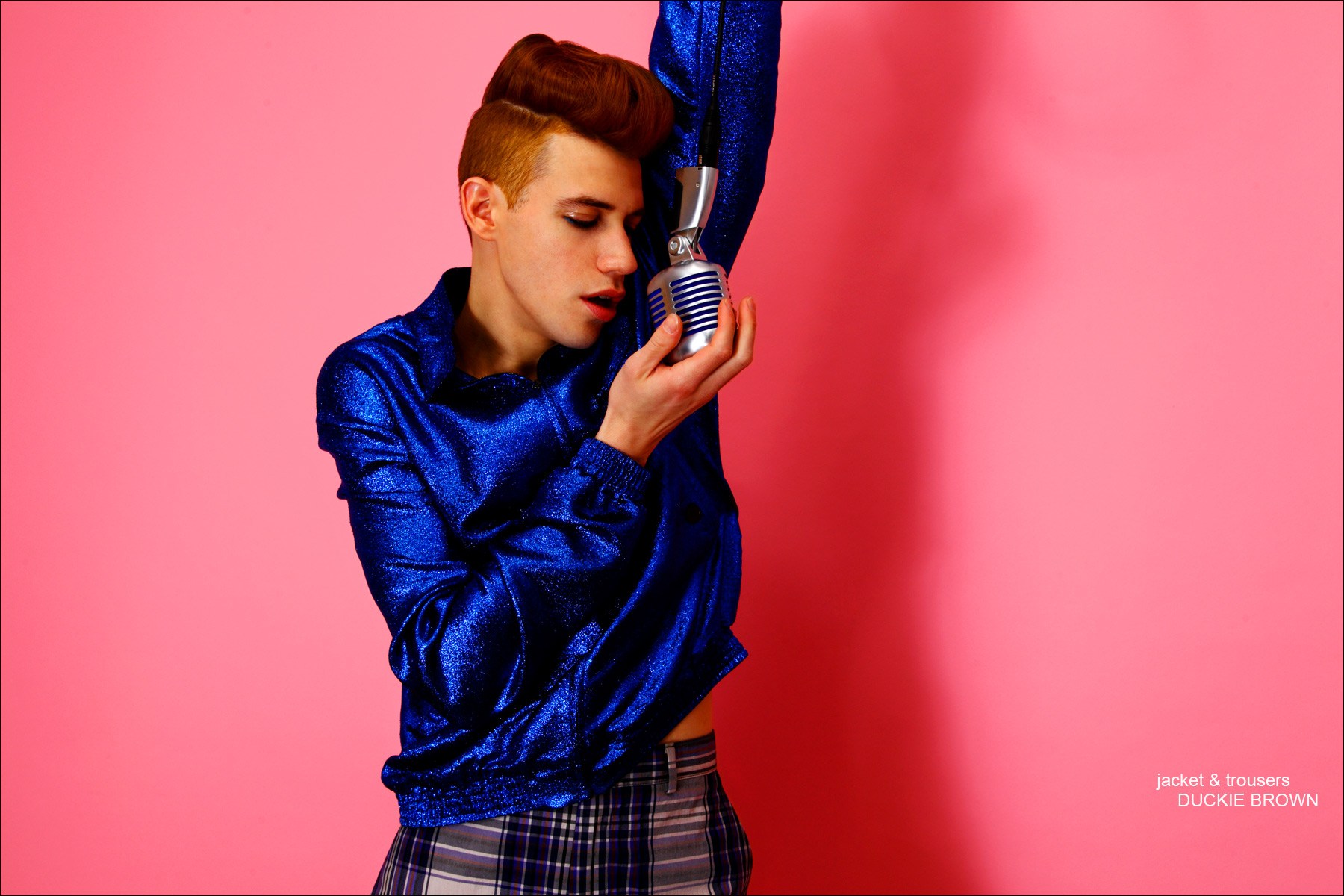 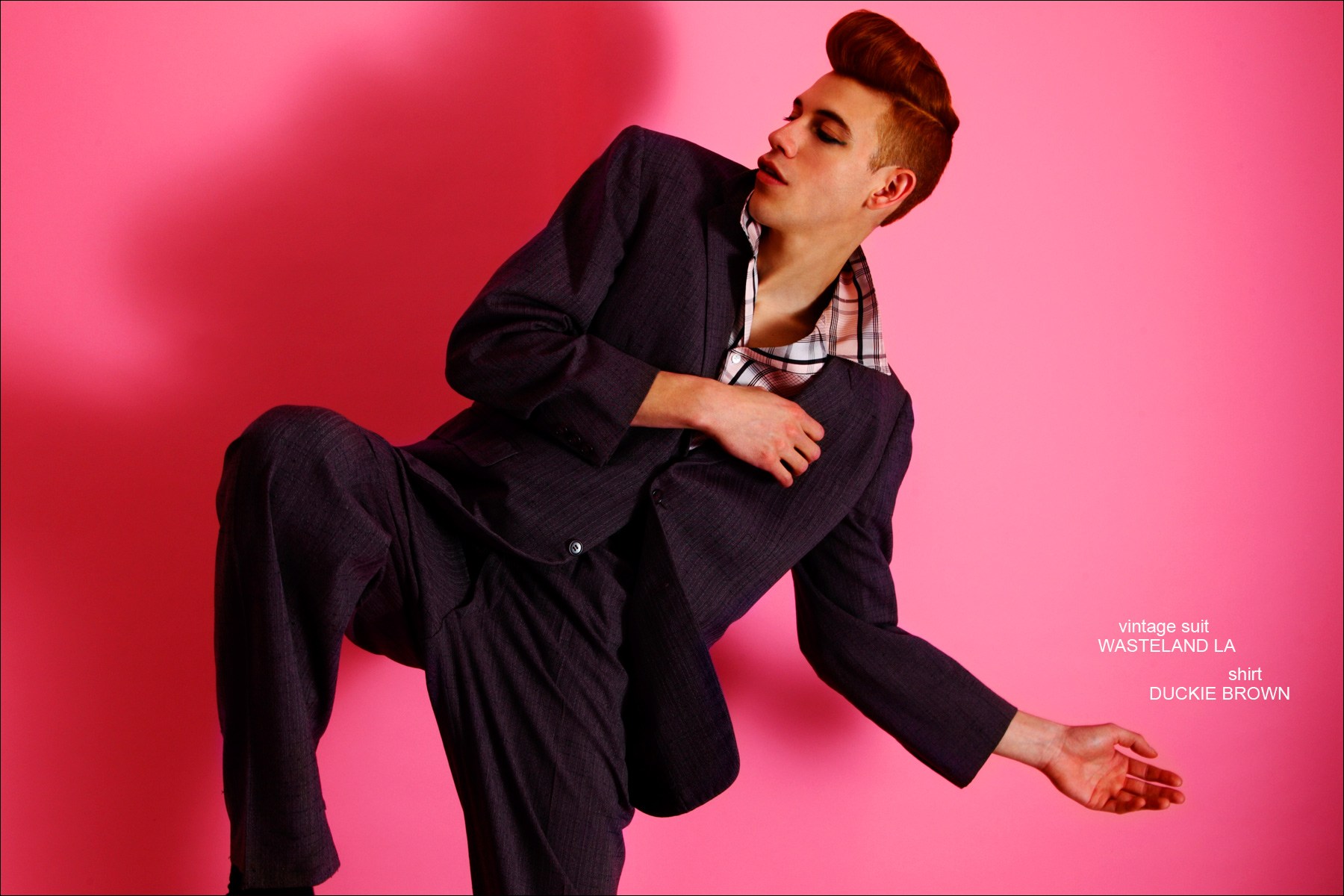 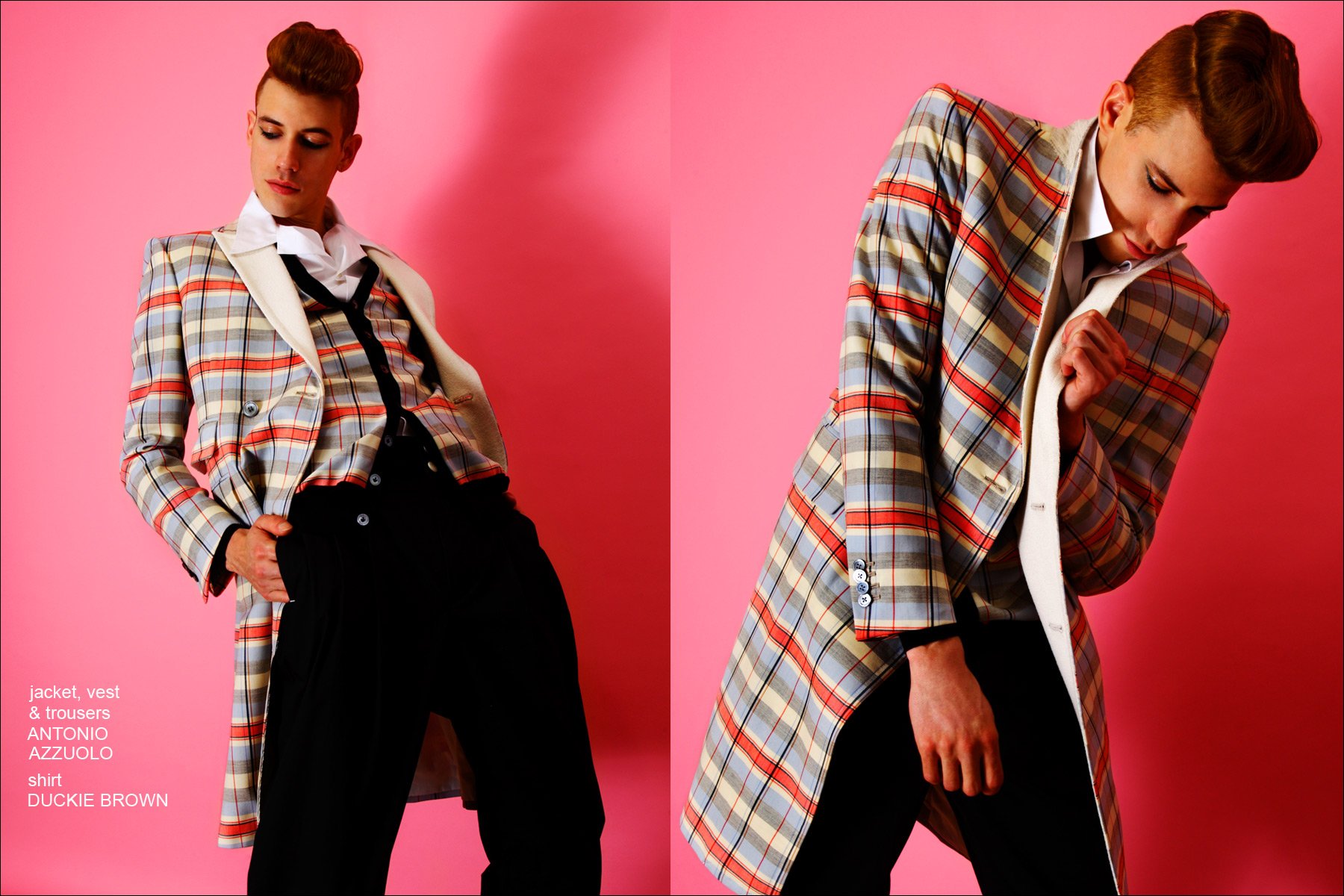 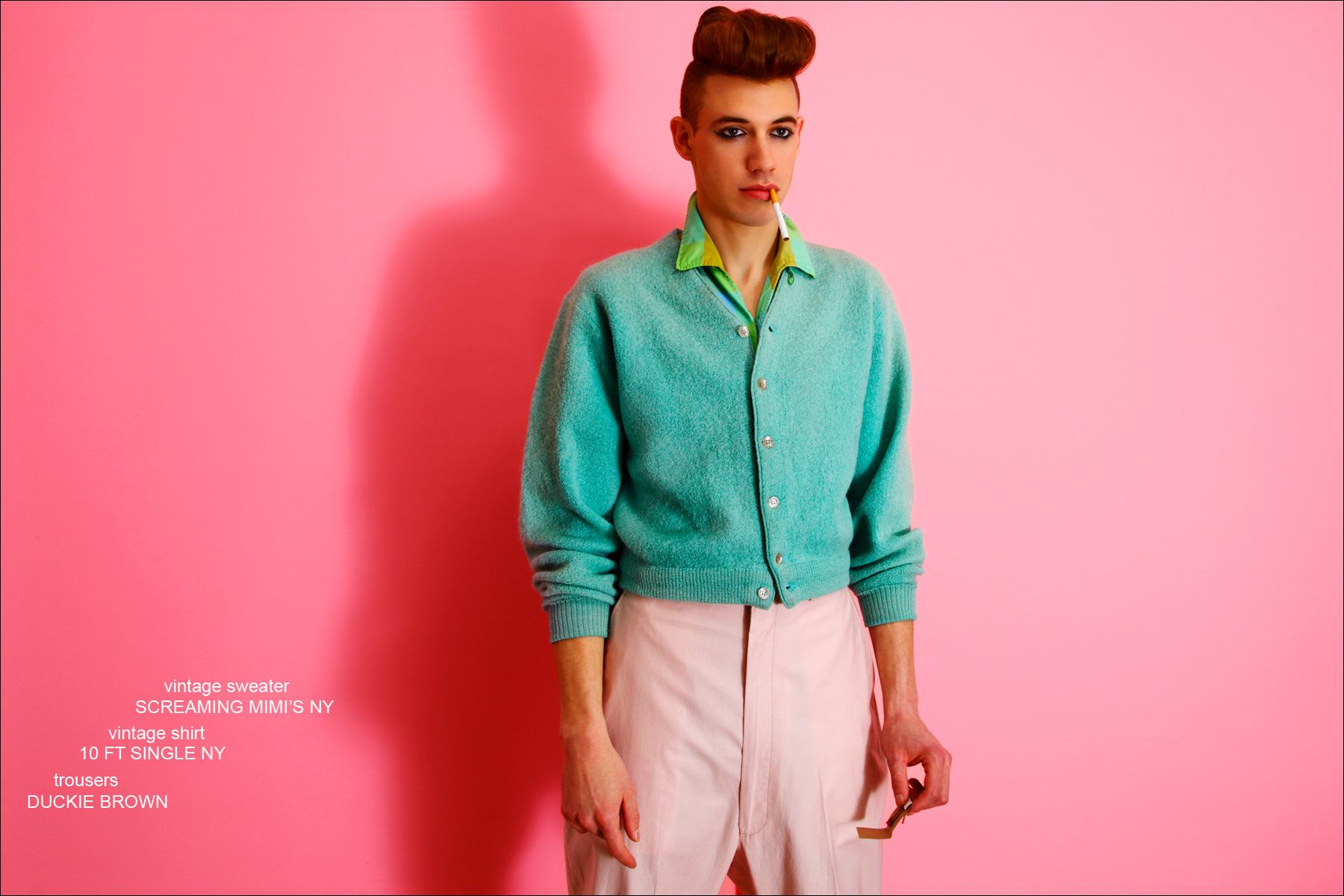 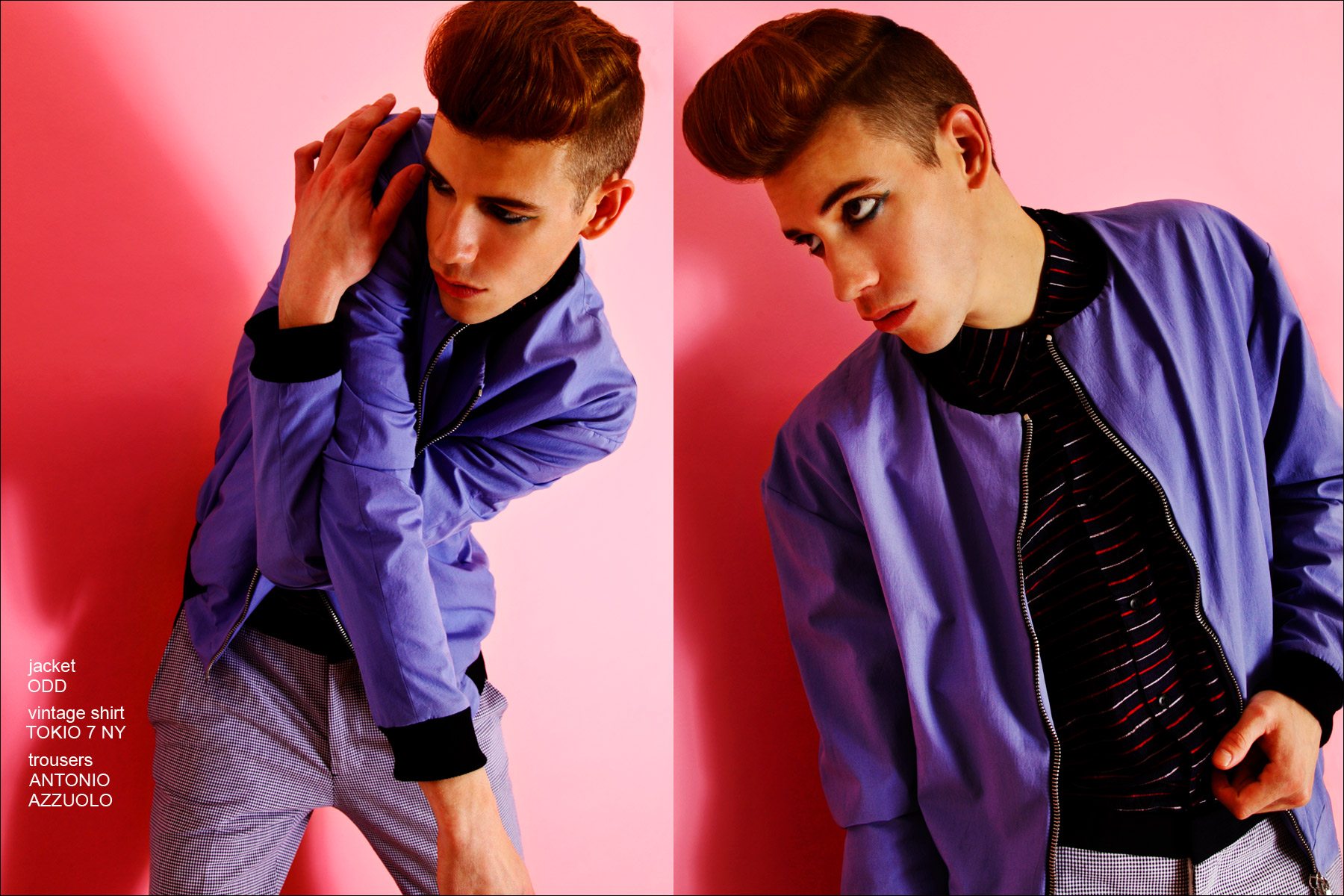 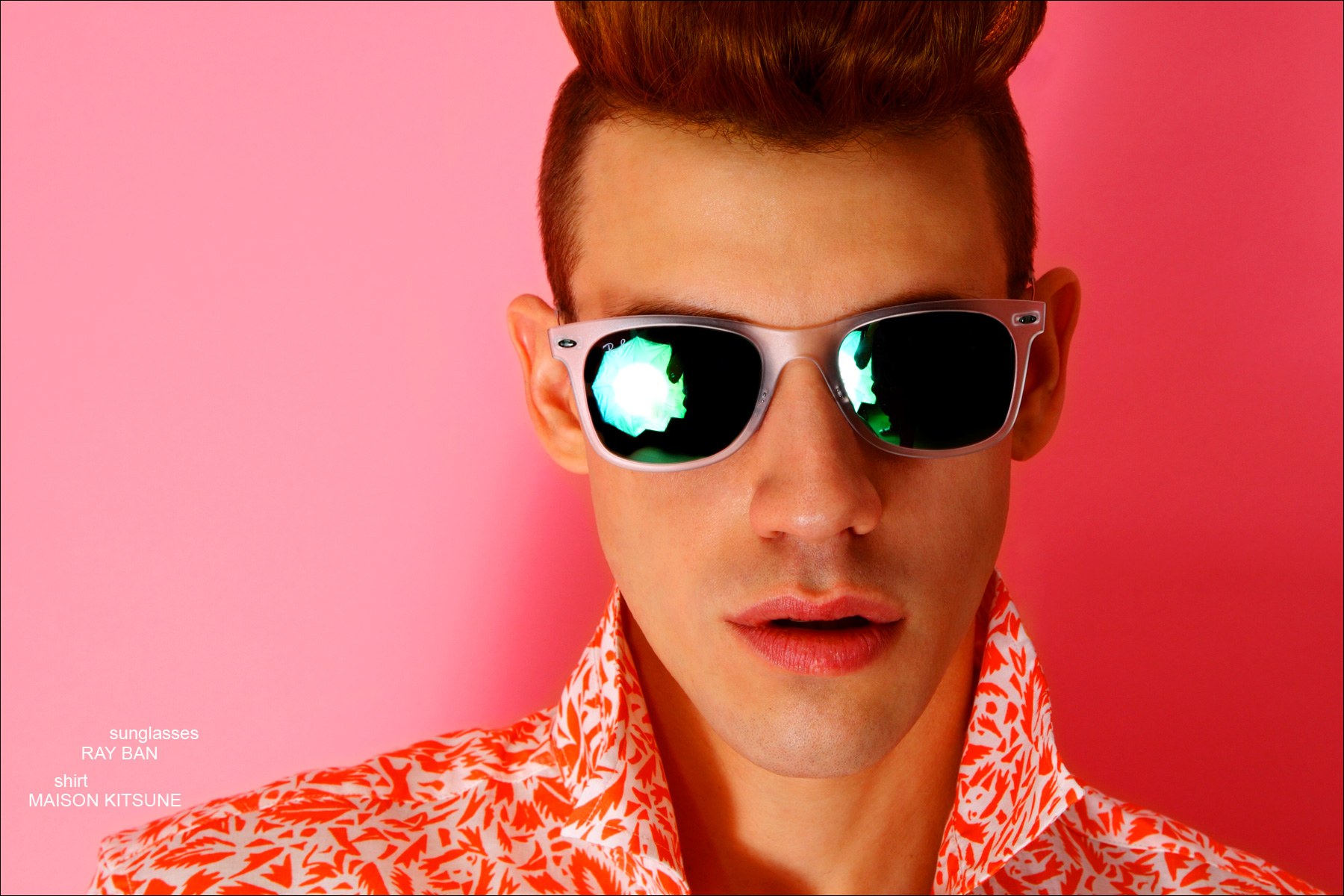 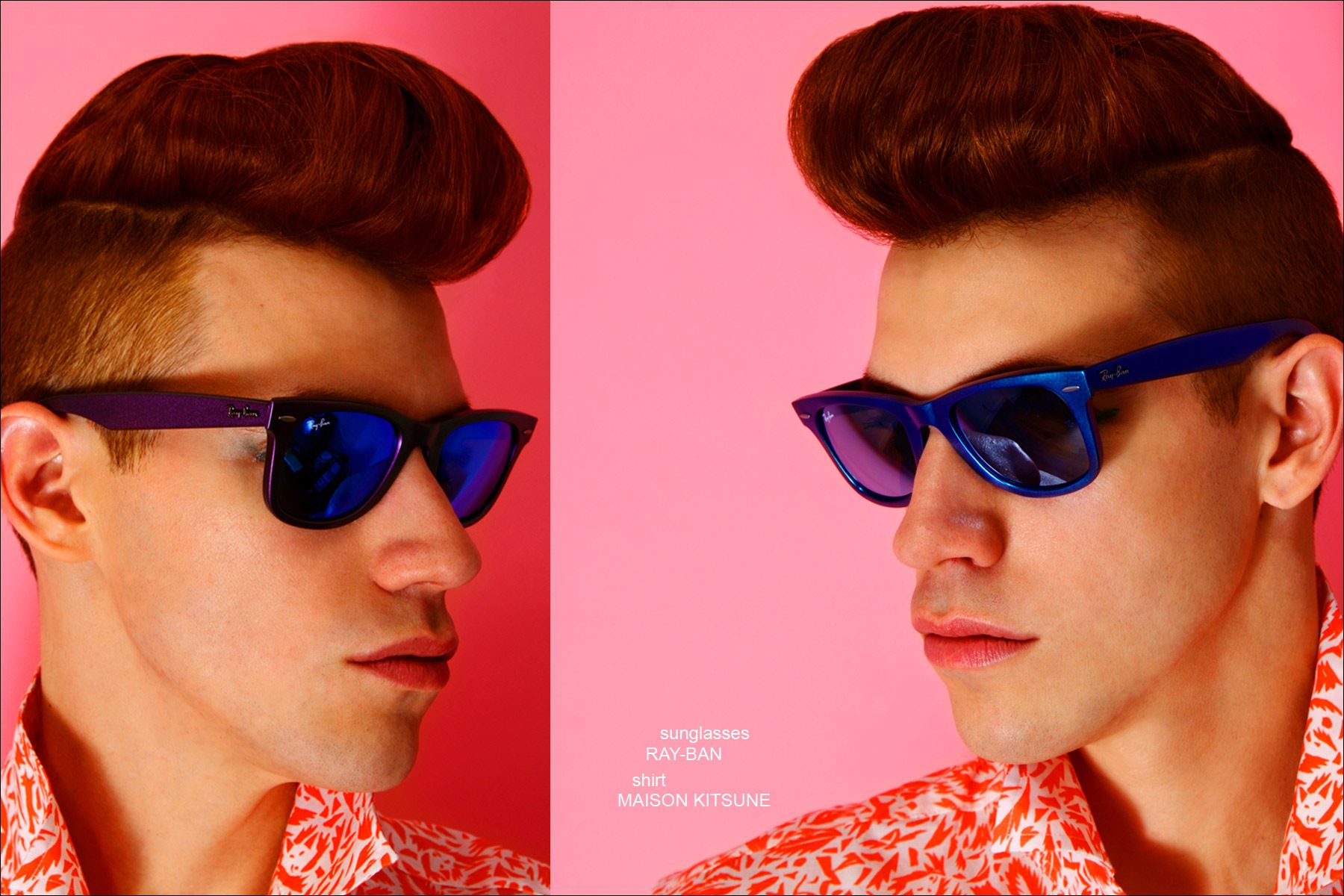 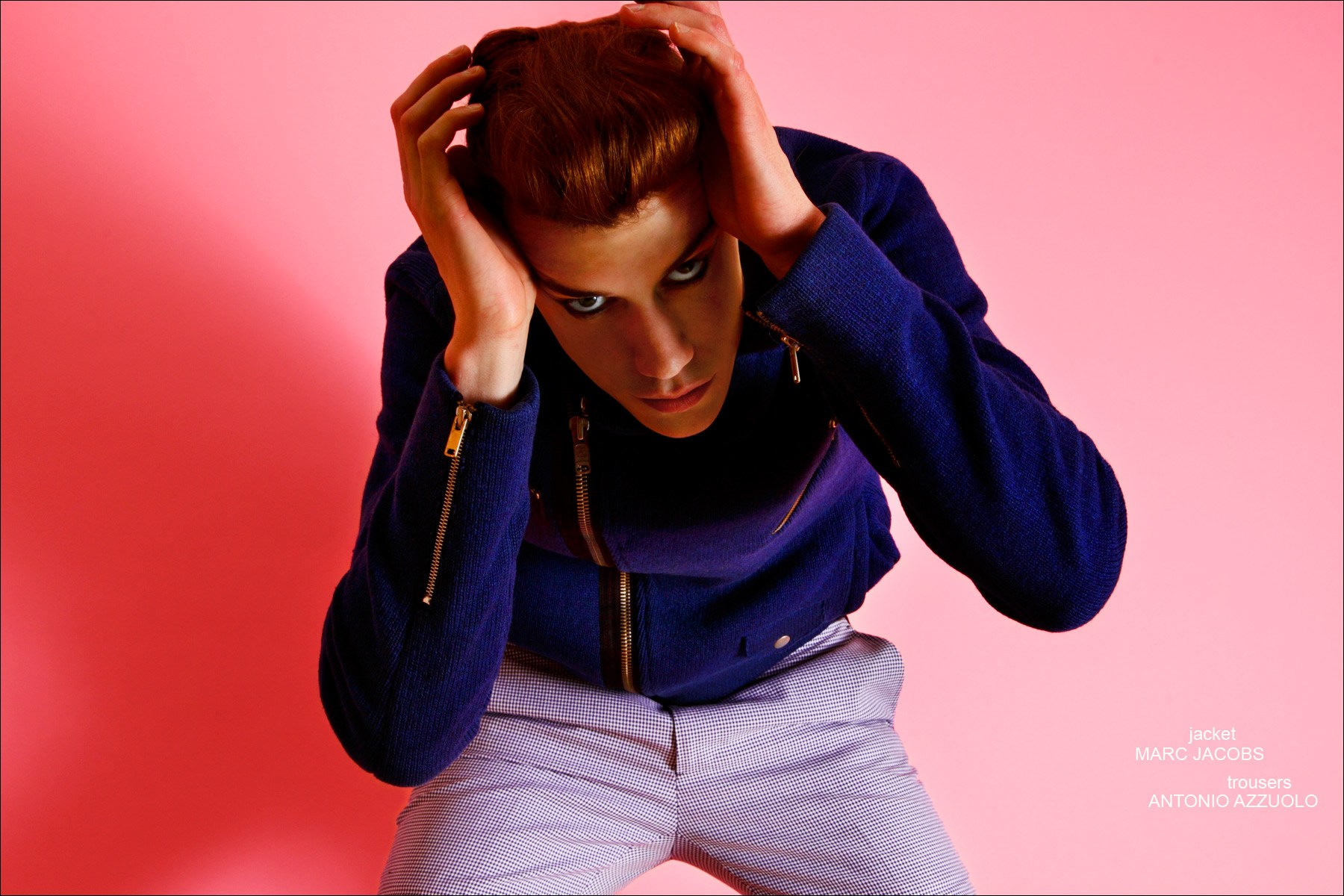 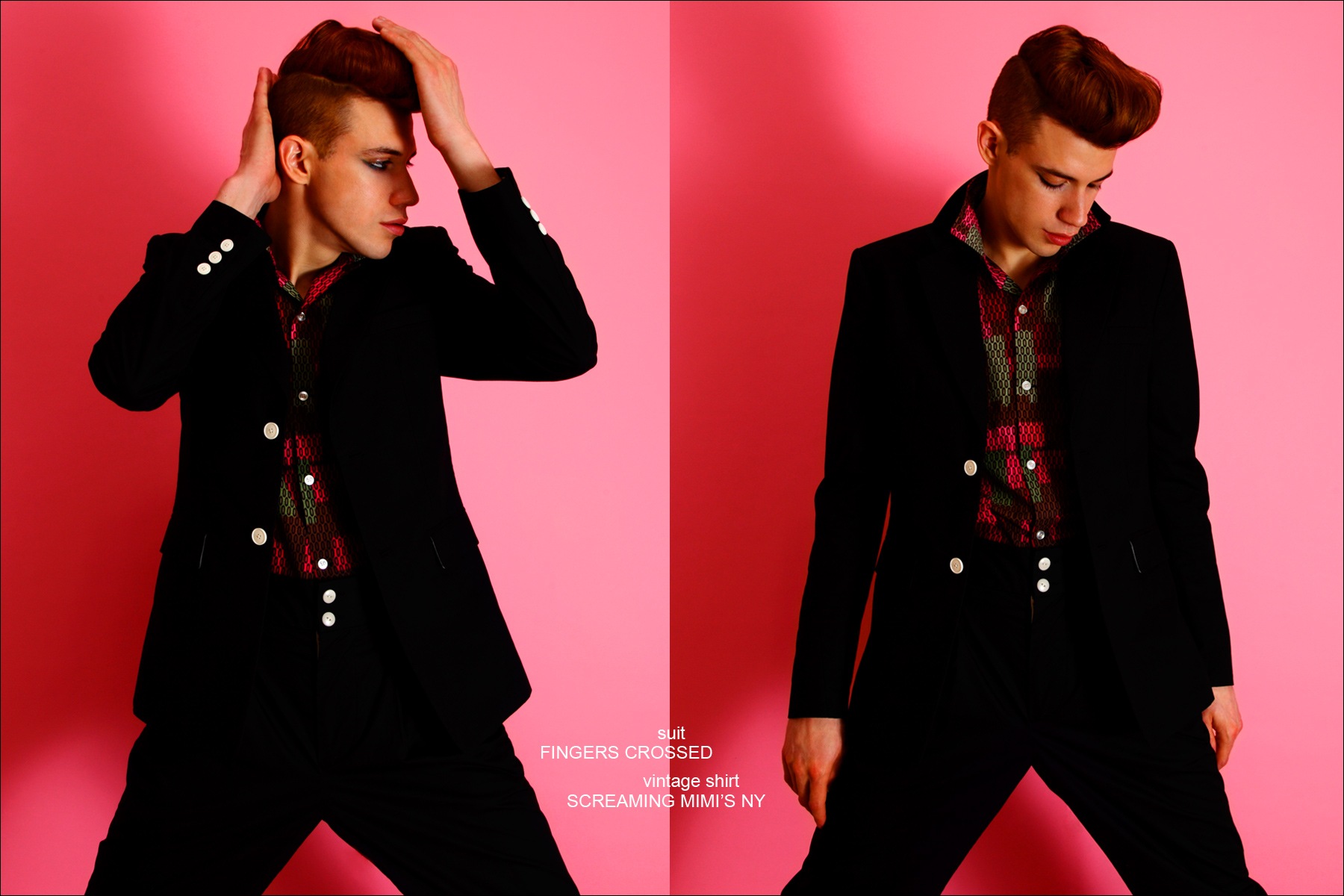 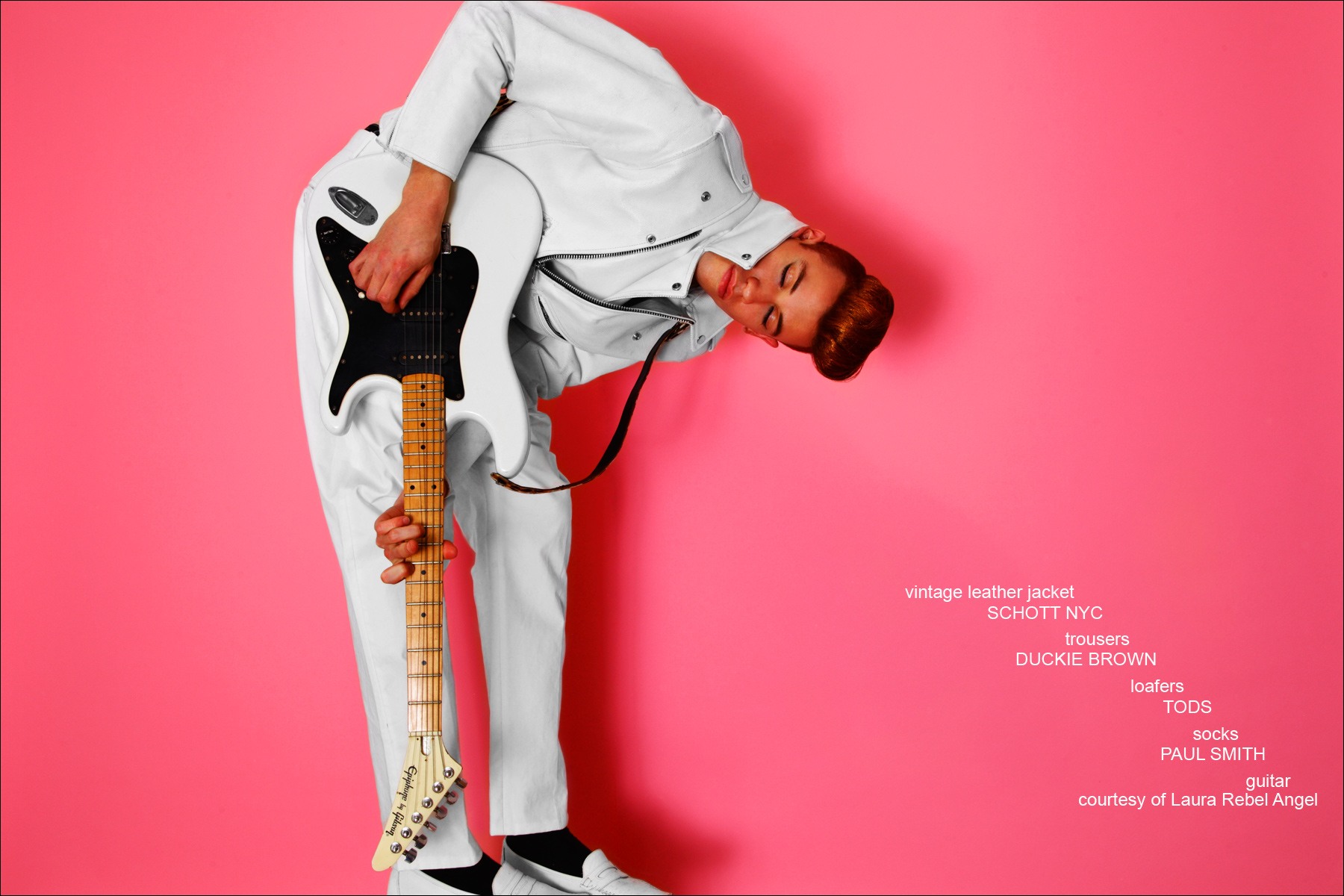 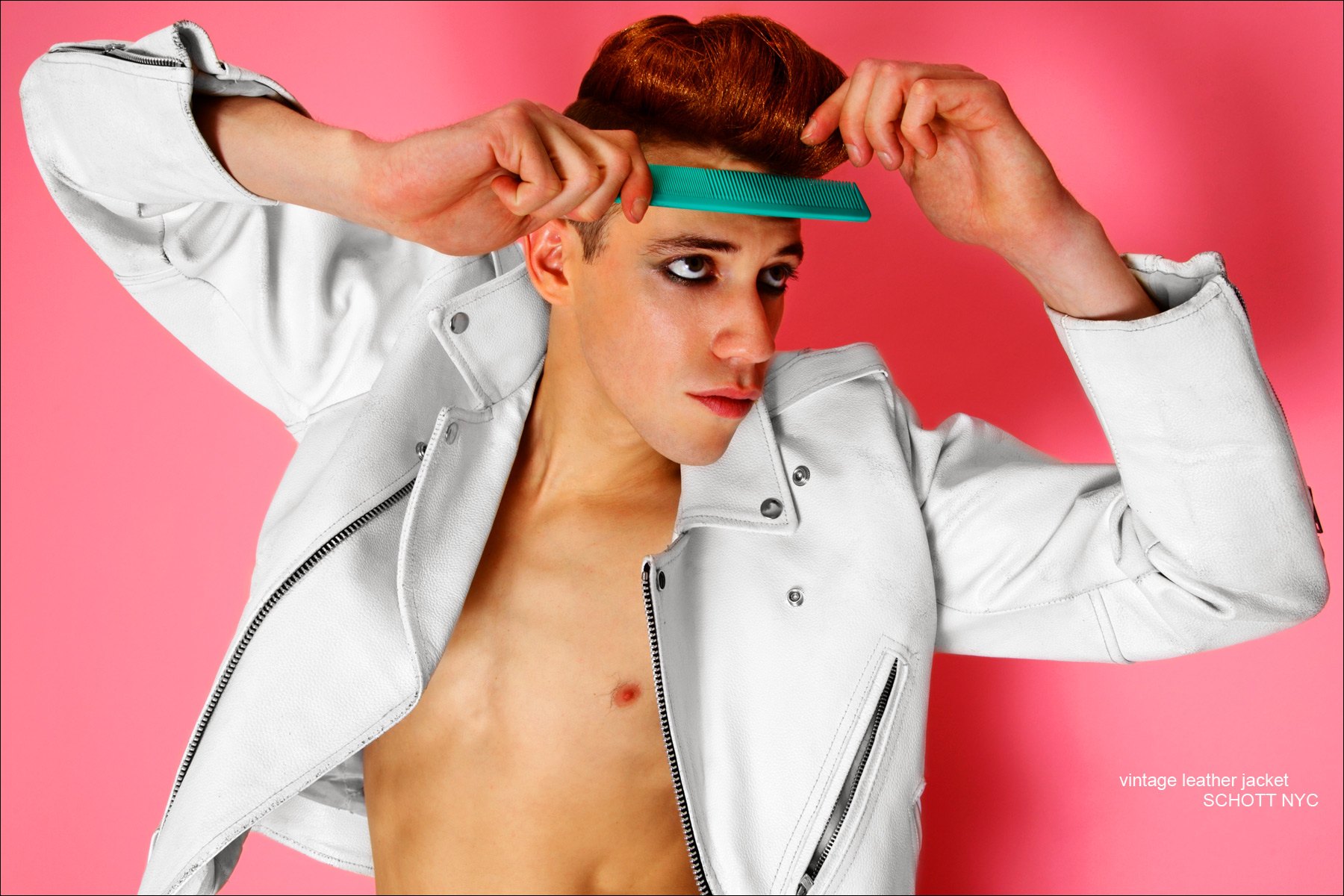 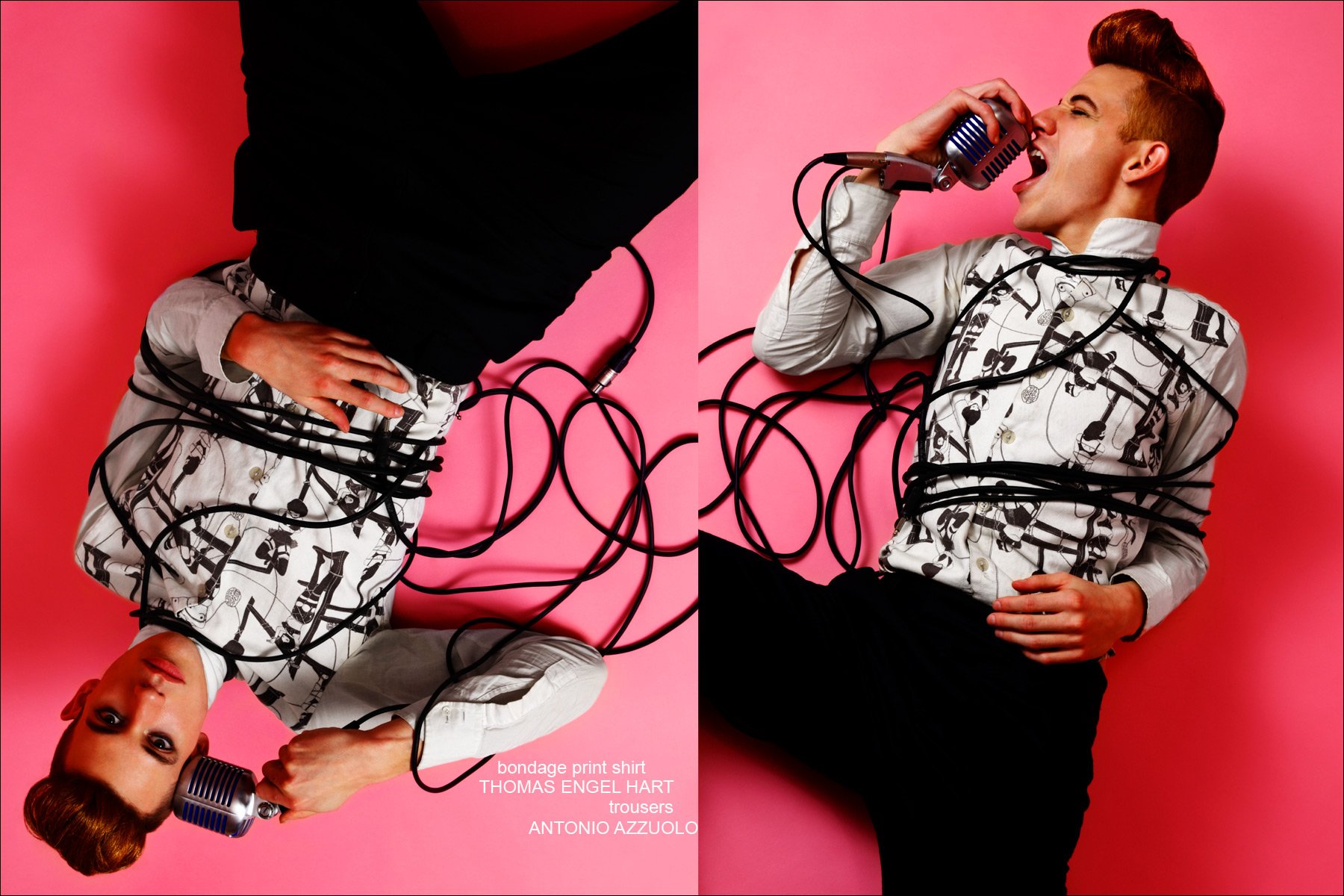 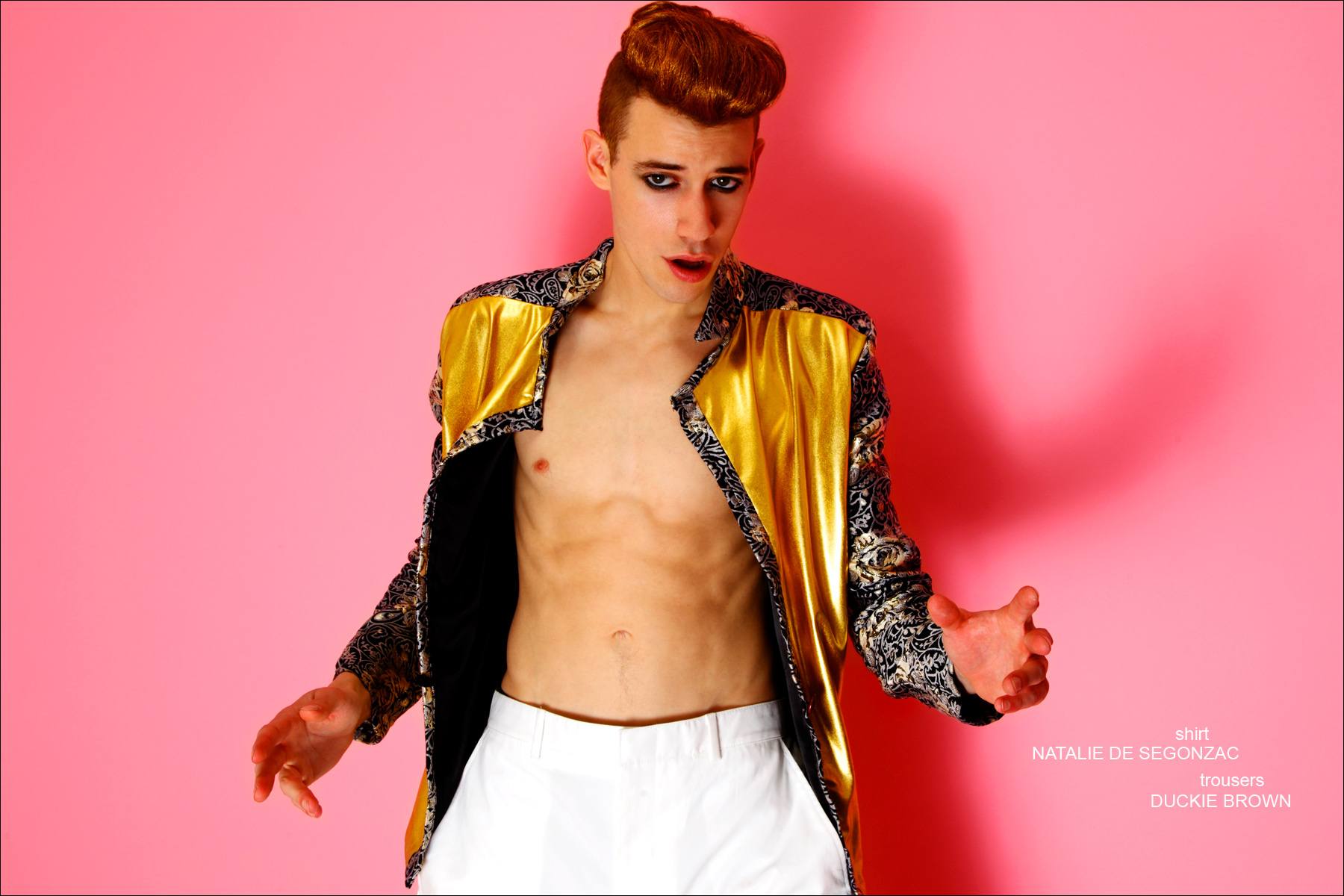 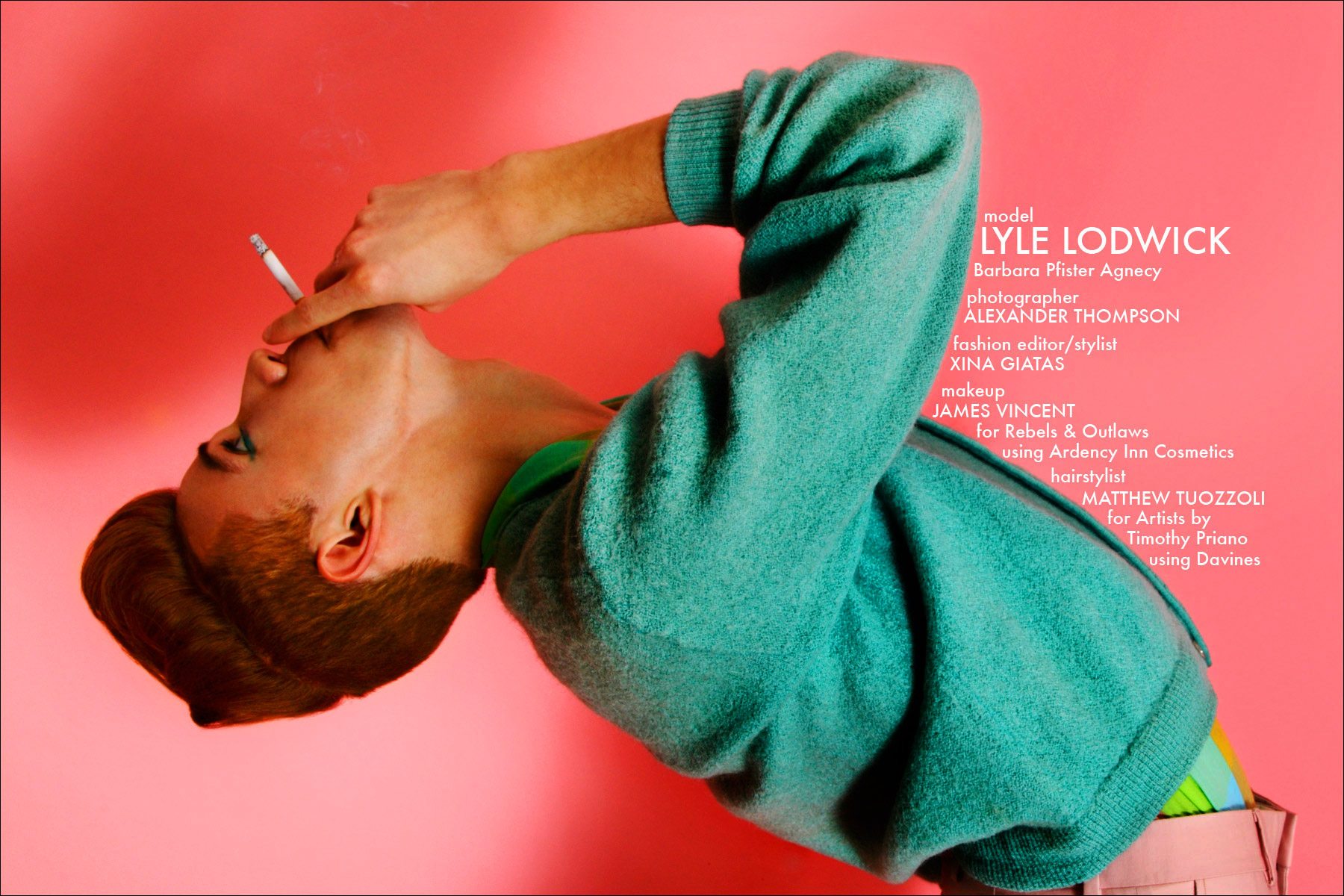 PONYBOY:  Lyle, please tell our readers about your background. Where were you raised?

‏LYLE LODWICK:  I grew up in Baltimore County in Lutherville, Maryland, the same place as John Waters and Divine. My high school was across the street from Divine’s grave, so we used to smoke pot and pay our respects at her grave. I started playing music at around age fourteen and have been in about ten bands since. Baltimore county was full of bands, so I often found myself putting shows together, booking the bands and venue, as well as doing the lights, sound, and promotion. I knew then that I wanted that to be my life’s work. And since then I’ve found many other things I enjoy doing, but playing music and entertaining always takes the cake.

LYLE LODWICK:  The first music I ever heard came blaring out of my father’s 1960’s Wurlitzer jukebox. He’s been buying and selling records since he was in his early twenties.  So, needless to say, music has been a huge part of my upbringing. My grandfather owned some record stores, and it was in one of these shops that my mother and father met. And my brother and sister had a huge effect on me musically, as you tend to get hand me downs being the youngest one, anything from tapes and cd’s to mp3. I basically had what they had.

PONYBOY:   What brought you to New York City?

LYLE LODWICK:  I came to New York to work as my brother’s assistant when he ran Vimeo. I had always loved New York City and definitely knew that if I wanted to do something on a global scale, this was the place to be, especially in 2008, as things were booming in New York musically and creatively. This city was the pearl in the oyster that is the World.

PONYBOY:  And how did you get into modeling?

LYLE LODWICK:  One of my first tasks when I moved to New York was to film backstage at the tents at Bryant Park during Fashion Week. Everyone was like, “you should model.” And so I did. My friend Christian Strobel introduced me to Barbara Pfister, who became my mother agent. Barbara booked me to shoot with photographer Ryan McGinley. Shortly after that, I was in the Sigur Ros music video for Gobbledigook, and then went to Europe, where my modeling career really took off.

PONYBOY:  You’ve been photographed for so many high-end magazine editorials and campaigns, by great photographers. What was that like for you?

LYLE LODWICK:  It was crazy. Much of that success can be attributed to Allister Mackie, from publications Another Man and Dazed & Confused. He’s an international menswear stylist who has more influence on the good side of contemporary fashion than almost anyone else. He put me forward, opening Lanvin, John Varvatos, Marc By Marc Jacobs, as well as magazine editorials for Dazed & Confused, Another Man, and many more.

PONYBOY:  What are your thoughts on the world of male modeling? Have you had positive experiences overall?

LYLE LODWICK:  ‏I wouldn’t recommend it to anyone. For all the good, there is a world of pain. It’s a sort of “banana on a fishing line” type of experience where you get fame instead of money and high taxes instead of a lasting position in culture. That said, I had an incredible time and met many people who I still consider great friends today. (It was nice to know how many people were pooping while looking at my face in one of millions of Urban Outfitter catalogues!)

PONYBOY:  You’re also a musician in a band called Shining Mirrors. Tell us about this project.

LYLE LODWICK:  Yes! I play Bass in Shining Mirrors! It’s a rock ‘n’ roll band. It’s three of us, so decisions are easy to make democratically. We take our time, so things turn out right.  On April 21st we self-released four new songs on our Soundcloud. (https://soundcloud.com/shiningmirrors …shiningmirrors.tv)

PONYBOY:  Has music always been your passion?

LYLE LODWICK:  ‏Yes, music has always been my passion. And I can only measure it as increasing over the years, from collecting my own vinyl, taking up guitar and starting my first band. The first time I was able to separate all of the individual instruments playing in a song was incredible, as well as listening to a song over and over again, and listening to each part individually. I thoroughly enjoy throwing concerts, which gives people a place to come together, by expressing themselves musically or in dance.

PONYBOY:  Who are your musical influences?

LYLE LODWICK:  My influences are pretty diverse. I share a birthday with David Bowie and Elvis Presley, so those two were there from the start of my life, with an emphasis on Elvis in my early years, and Bowie later on. The Beatles, The Slickee Boys, Steely Dan, The Talking Heads, The Velvet Underground, Radiohead, Aloha, Cake, Donny Hathaway, The Spinto Band, LCD Soundsystem, Frank Zappa. et all.

PONYBOY:  What’s in store for you in the future? Do you still plan to model or are you anticipating that music will be your main focus?

LYLE LODWICK:  Music will always be my main focus. Modeling is about making money, not being a style icon or influencing others. If there’s money on the table, I guess I’ll be modeling! I’m moving to LA in fifty days, and am so ready for a change of pace after eight years in New York. I’m not sure Los Angeles is the answer, most likely I’ll have more questions. 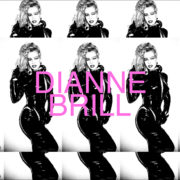 DIANNE BRILL
QUEEN OF THE NIGHT 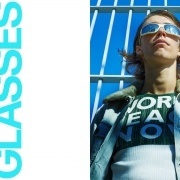 MENG MENG
THE ONE PIECE