Chloe Rose is a spectacular-looking East Coast rock ‘n’ roll beauty – the other half of Killer Kin, the bad-ass Connecticut-based band she formed with partner Mattie Lea. Visually speaking, the guitarist screams a unique style of Tura Santana with some ’70s Runaways thrown in the mix. And their on stage performances slay with all kinds of raw noisy music. Expect their highly anticipated, full-length debut album to pop off in 2023. And if you’re lucky enough to catch them in a venue near you, be prepared for a very unforgettable, wild, energy-filled ride! Killer Kin is the real deal kids. Photography Alexander Thompson.

PONYBOY: You’re a musician based out of Connecticut. How did you get into playing guitar?

CHLOE ROSE:  I taught myself how to play guitar maybe five years ago because I had always wanted to try to write music and start my own band. Growing up, my mom played bass, and my dad and uncle played guitar, so I was always around that kind of thing too. I played piano until I was about 9 or 10, but I hated it. When I decided to start learning. guitar, I would just play along to the rhythm parts of songs I knew, and I kinda just stuck with playing rhythm guitar from there. I feel like I really learned to play by being in a band, writing my own songs, and playing live over anything else. The experience you get by throwing yourself into it like that is pretty unmatched; you get better at playing your instrument and get comfortable being on stage real quick, which is probably the most important part in my opinion. I’ve always been attracted more to the energy, presence, and songwriting of bands I like rather than technical ability if that makes sense. If you write good songs and play them well, that’s all I need. I had only been playing maybe a year before I started Killer Kin. 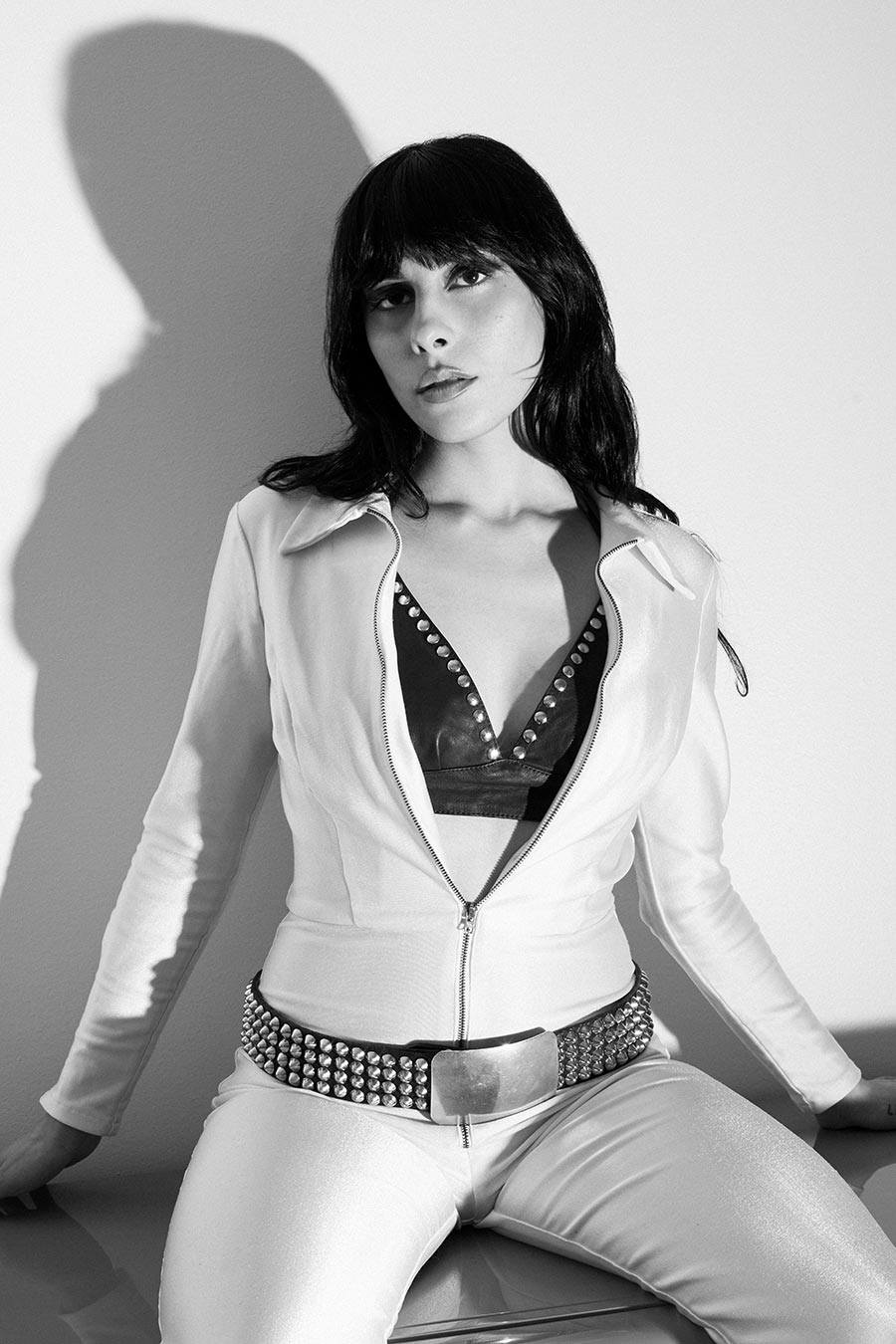 PONYBOY:  Describe the Killer Kin sound, as well as the overall aesthetic of the band.

CHLOE ROSE:  Dirty, mean, with just the right amount of clean. We’re definitely a live band. What I mean by that is we’re very visual. Performance is a key part of what we are. Killer Kin is an amalgam of all of our influences I’d say. Mostly ’70s punk and rock ‘n’ roll. Matts got such a powerful voice and presence. He naturally has this Jim Morrison, Bon Scott energy and charisma on stage. And I mean that when I say it. It’s like in his DNA or something to be a frontman, and we all have this great chemistry when we play together. Somehow I think we don’t fit into one particular category musically or aesthetically, but it translates to people who are into a lot of different genres. You’ll just have to come out and see for yourselves! PONYBOY:  Tell us the background of the band. Who are the members of the band besides you and Mattie?

CHLOE ROSE:  Matt and I started the band in 2018, and have been writing songs together since. We met when we were about 19 through some mutual friends and clicked pretty instantly. I remember one of the first conversations we talked about, all our favorite bands and songs – one, in particular, being ACDC’s Walk All Over You. The rest of the band are our good friends. Brady “The Cat” Wilson on lead guitar, Marco Carotenuto on bass, and Jason Kyek on drums. 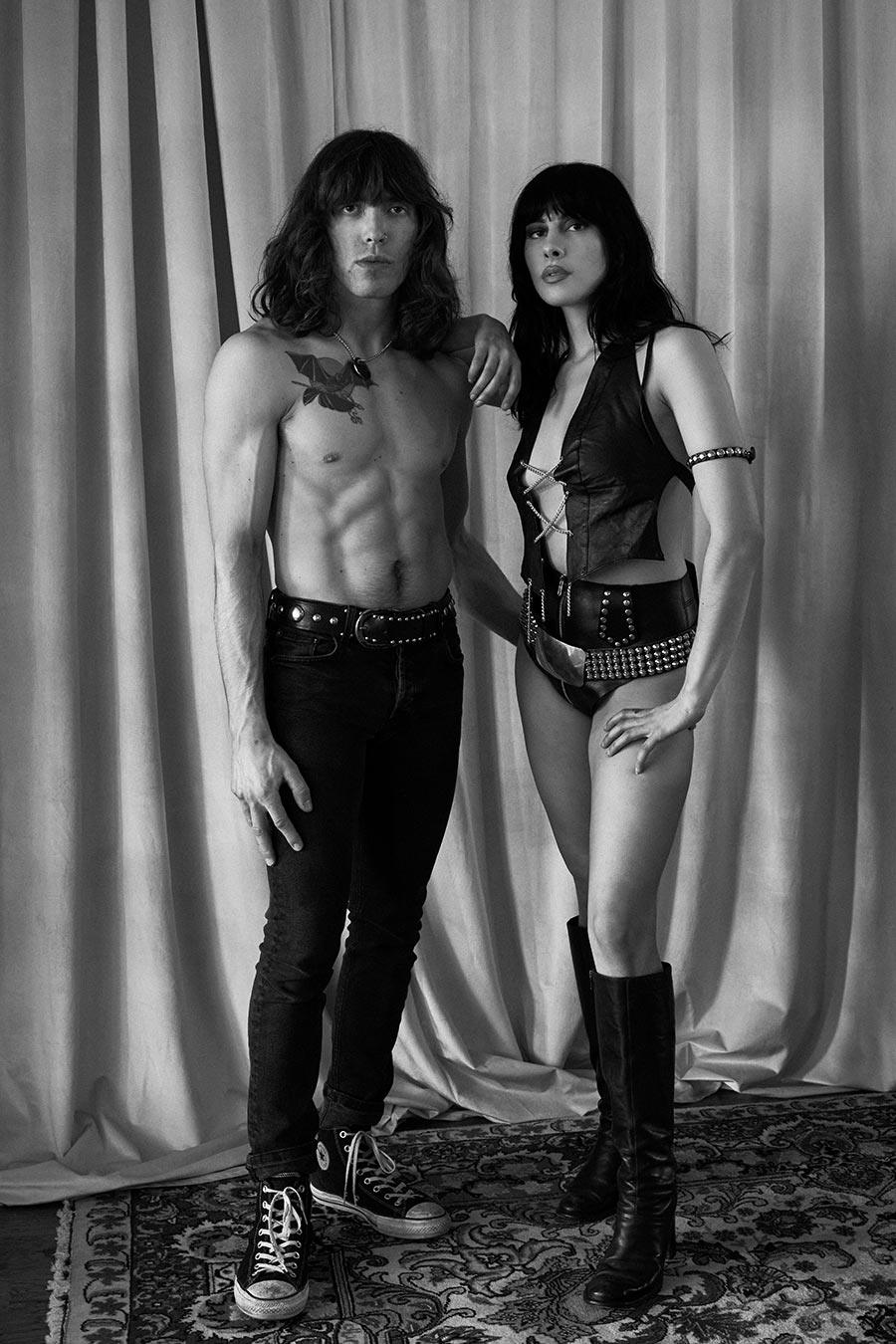 PONYBOY:  Who would you say are some of your favorite bands that have been an inspiration to you over the years?

CHLOE ROSE:  My favorite bands of all time are The Rolling Stones, Motörhead, KISS, The Stooges, ACDC, Alice Cooper, The Dead Boys, the Plasmatics, Judas Priest, The Dolls, the Runaways. They’ve all inspired me in different ways over the years. As a guitarist and songwriter, I don’t really look up to one band or person in particular. Some of my favorite guitarists I suppose would be James Williamson, Johnny Thunders, Joan Jett, and Malcom and Angus Young.

PONYBOY:  What local East Coast or NYC bands do you follow?

PONYBOY:  Your personal style is very unique. Who are your style icons?

CHLOE ROSE:  Mostly my favorite bands, ’60s and ’70s actresses and bombshells like Nadia Cassini, Natasha Adonzio (’70s punk clothing designer who made outfits for Debbie Harry, some of the Ramones and many more) ’80s Axl Rose, groupies, video vixens… 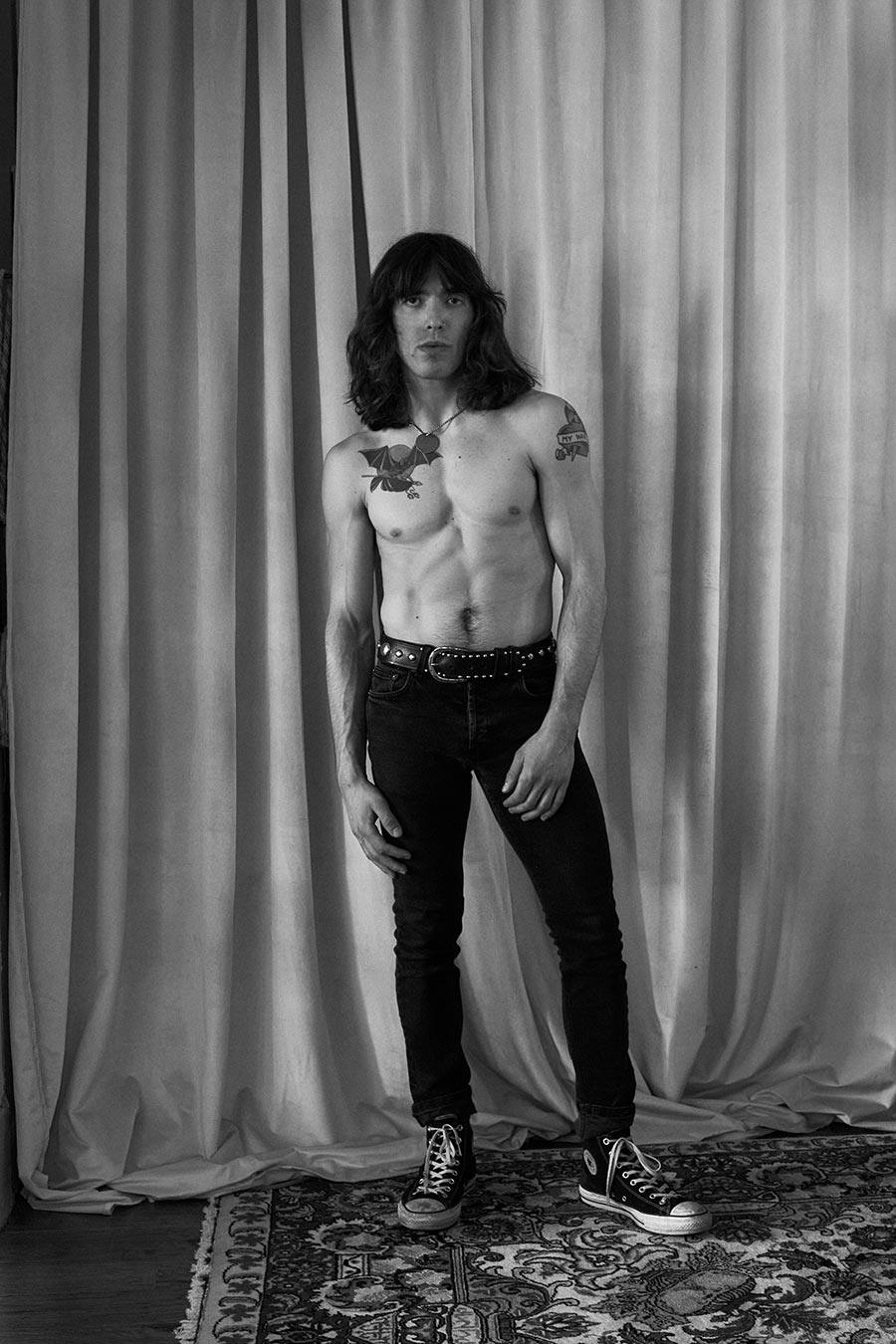 PONYBOY:  Are there any designers or labels that you’re a fan of? Or are you a more “do-it-yourself” kind of gal?

CHLOE ROSE:  I buy a lot of my clothes secondhand, and from small designers when I can afford it. I’ve had a couple of custom pieces to wear on stage made by Cat Black like this cut-up spandex one piece that says “Killer” on the ass in studs. I’ve had a ton of studded leather pieces like guitar straps, belts, and cuffs made by Creatures Closet. I sell clothes through my own shop Leather Cowgirl Vintage – all vintage, new and used clothes, and some bootleg shirts I’ve made too. I named it after this drawing of a leather-clad cowgirl I saw in a book of Eric Stanton drawings, who was a fetish art cartoonist.

PONYBOY:  How was it opening for Tav Falco? Any shows that have been your favorite to play over the years?

CHLOE ROSE:  That was our first show as a band, and I didn’t even really know how to play at that point still. Actually, not only did I barely know how to play, I didn’t even have my own guitar yet. I borrowed one from my uncle. I was definitely intimidated to play live for the first time, naturally. But getting up there felt really good. Tav’s performance was really cool and theatrical. We chatted a bit about Poison Ivy, the Cramps and the Gun Club afterward since he had played with them back in the day. Every show we’ve played with our current lineup has been my favorite show over the past year. But I think my favorite show to date was here in New Haven a couple of months ago at this venue Cafe 9. I played two sets that night. One with my other band Tramp, which my friend Gabbie of BBQT and I started together, and then Killer Kin. The show sold out, and people started going really nuts at the end during Killer Kin’s set. They started throwing cans which were flying everywhere, and I was picking them off the stage and throwing them back at everyone. 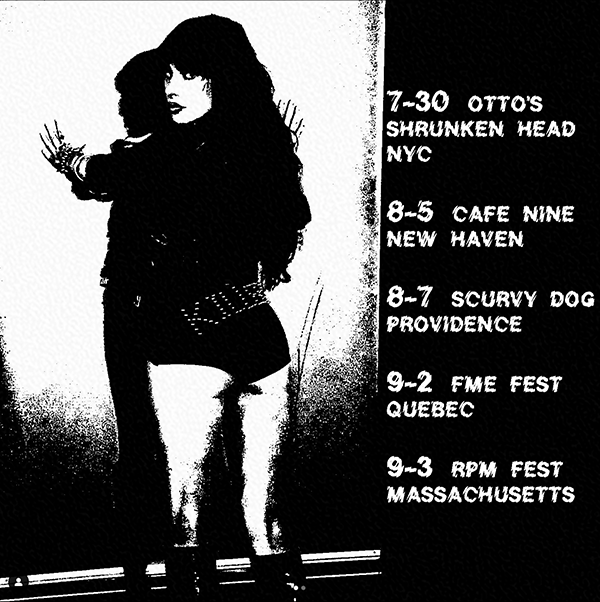 PONYBOY:  Are there any plans for video work for the band?

CHLOE ROSE:  Yeah! We’d like to do a music video for a couple of songs off of the new record. More on that to come…

PONYBOY:  Is there any touring planned for the band? And tell us who you think would be the ultimate double bill with Killer Kin?

CHLOE ROSE:  We’re starting to plan out a tour for the spring time hopefully to align with the record coming out. I think the ultimate double bill would be either with C.O.F.F.I.N, or Malavista.

PONYBOY:  Tell us about Killer Kin’s debut full-length album coming out in 2023.

CHLOE ROSE:  It’s the perfect introduction to Killer Kin for those that don’t know us yet. The record is self-titled, with ten live-wired tracks, each one better than the next, I’d say. What I like about it is each track is pretty different from one another while still all being in the same vein. We’re picking up where our debut 7” left off and running. Don’t say I didn’t warn you! 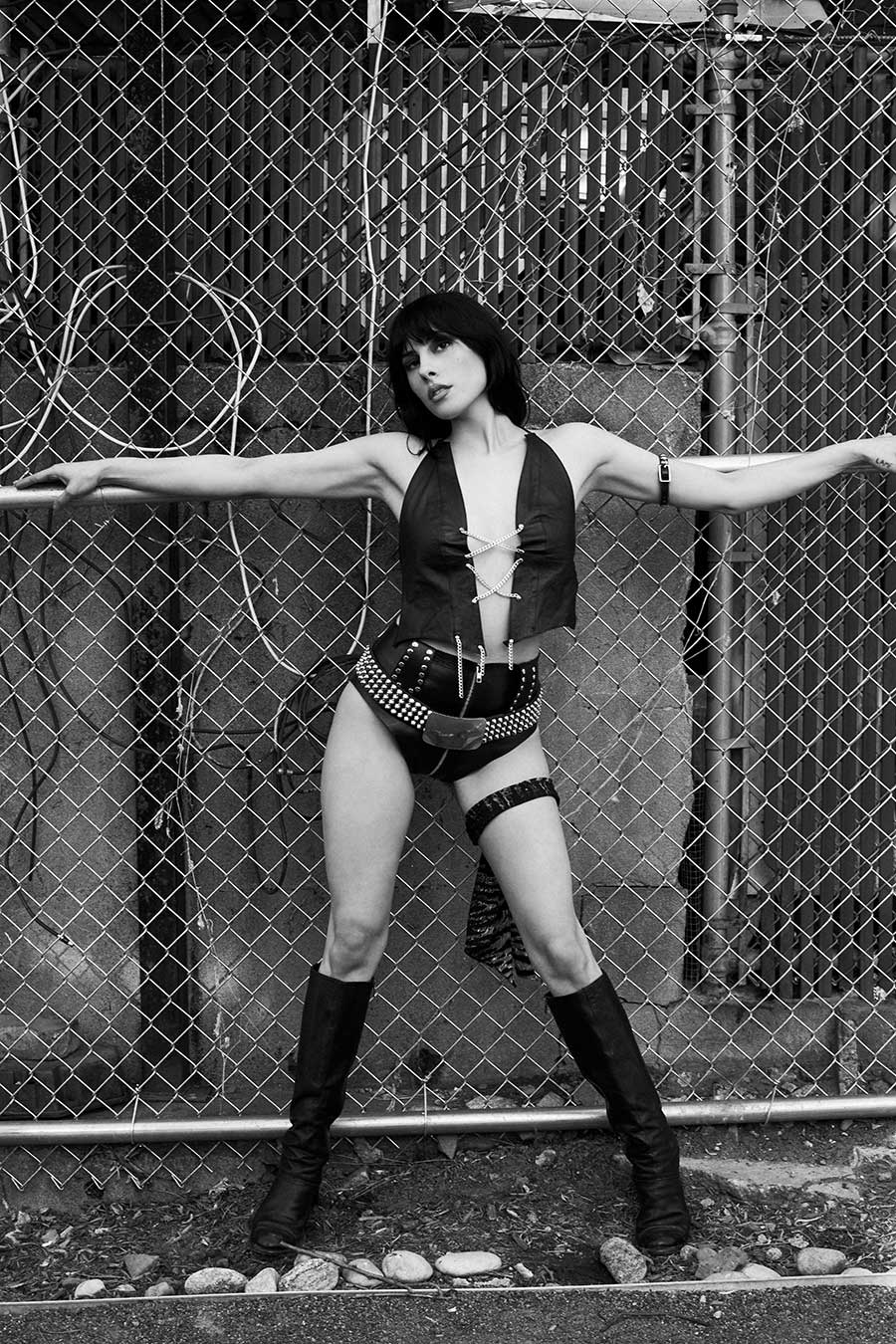 UNI AND THE URCHINS
“POPSTAR SUPERNOVA”
Scroll to top