Jerrie Boy Jerrie aka Jarrett Barger is the frontman for Killer Hearts, an electrifying Texas-based rock/punk band. In-person, Jerrie is everything you would expect him to be – a visually fascinating and mysterious persona with jet-black dyed hair, lipstick, eyeliner and tattoos. While performing on stage, Jerrie swaggers to the band’s kick-ass tunes, belting out song after song with the most explosive energy that we were immediately sucked in and became Killer Hearts fans for life. For their most recent tour last fall, Jerrie’s stage “look” was unique and eye-catching. The singer wore a glittery black jumpsuit with thigh-high red boots. The finishing touch to his ensemble was bright-red stage blood, that ran down his mouth, dripping onto his tattooed chest. We immediately knew that a “star had been born” – and YES, that a Ponyboy editorial with Jerrie was a mandatory must. For our shoot, Jerrie invited our camera into his home in the eclectic Houston neighborhood known as The Heights. We were intrigued with the twisted artwork that he had created, hanging on his walls, as well as his sick and dark interpretation of “home decor”. Boy, did we feel lucky!

Their debut album, Skintight Electric, was released last fall and is available on Spaghetty Town Records (https://www.spaghettytown.com/) in the US, as well as Dragstrip Riot Records (https://dragstripriotrecords.bandcamp.com/merch) in Europe. Besides Jerrie, the band also consists of his younger brother, Brandon Barger (honestly, one of the best guitarists we’ve ever seen shred on stage), bassist Gil Lira and drummer Cory Parker. Buy this record, you can’t go wrong! Photography Alexander Thompson.

PONYBOY:  We love your band Killer Hearts. Describe the band’s sound and aesthetic to our readers.

JERRIE BOY JERRIE:  The methodical, and pre-meditated sound of a metal file on iron bars during a thunderstorm. The boots echoing on concrete floors, wooden clubs against the walls. A shrieking strangled covenant. Chanting hymns to conjure. Depraved, desperately unhinged, barbaric frequencies of a hedonistic underworld. I like to imagine myself as a real stiff corpse. Maybe we could appear to be a charming school of demons, you wouldn’t feel so bad feeding.

PONYBOY:  The new video for “Buried in Leather“ premiered on Valentine’s Day. Tell us about the concept of the video? And who directed it? It’s really impressive.

JERRIE BOY JERRIE:  “Buried in Leather” was directed by Dwayne Cathey, who is really an amazing visionary. Very happy to finally get to work with him on the project. Been wanting to collaborate for years. The concept was a bit to recreate a surrealist still life. Like a René Magritte, or a Giorgi de Chirico painting. Things bleed, burn, and get penetrated. 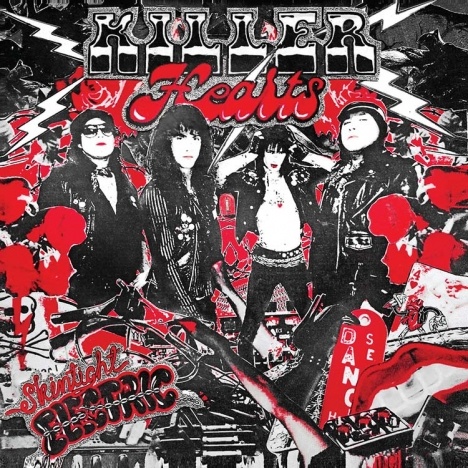 PONYBOY:  Skintight Electric, your debut LP for Killer Hearts is on heavy rotation at our home. What was the process like making the album? We see that you had an EP and Single beforehand.

JERRIE BOY JERRIE:  It was done over a few years. At times it was a magical dream. At other times it was a vicious tormenting nightmare. Sometimes you have to listen to one particular sound over, and over, and over. When you leave the studio you feel pretty strange. You track each instrument separately, but you start off playing them all together. It was recorded, and mixed at Sugarhill Studios by Stephen Finley, and produced by Don Cilurso. And mastered by Jack Control at Enormous Door.

PONYBOY:  You’re a Texas-based band. When and how did you guys form?

JERRIE BOY JERRIE:  Killer hearts started 7 years ago I think. With Gilly T., Brandon Problemchild, Turbo-Coro, Pablo Ono of the Black Novas, and Donny DemonBoy of The Stiff Ones. Some things got mixed around after a year or so. They asked me to sing for some shows. I thought it was fun enough.

PONYBOY:  What was life growing up in Houston, for both you and your brother Brandon?

JERRIE BOY JERRIE:  It was humid like a sauna with psychedelic skies of orange-pink, and bright blue skies every morning. Moving from one side of town to the other each year or so was alienating to some degree. Typical mostly, not too bad, could have been worse. Humid. My older sister got on the dance team at one point, and would have the whole team stay the night. It was wonderful for a while. The tragic teenage boner flick.

I spent a lot of time walking the paths of the bayous til dusk. Once in a while, you would have to run from pickup trucks covered in mud. Screaming can throwers, good for a bloody nose and a black eye. Not bad. The principals would wait for you to walk into class with pink hair and earrings. Then tell you to go home for three days, and paint it back normal. 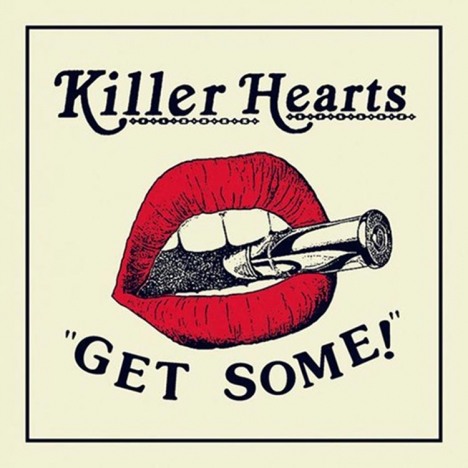 “Get Some” single by Killer Hearts, 2o2o.

After a few times, they would just send you to reprogramming for eight weeks, where many of us had monitoring devices on our legs. Kind of like an iPhone watch. They would sit us in circles, and make us talk about our feelings. Most of us were upset about not getting dates to the dance, or our fair porcelain children drenched in muck, the spotted arm armory. This constant migraine doesn’t match my 24-hour release tablet and these mind-eraser chewable gummies. Others just had bad cramps from living in a Toyota with the entire family. So then we would all meditate, and listen to ocean sounds. It was nice there, locking myself in my room, writing poems, and drawing little pictures on my walls. Until it was 100%. Spray painting billboards, and under bridges. Or you could hang out in empty parking lots. Have you ever been to the mall…but not to make a purchase, only to roam with spiked-headed dregs? Crash a party, and try to get some loot, sad to say. Joyride someone’s uncle’s car.

One time a girl came over and brought a bass guitar and a skateboard that they had taken from some older dude. So Brandon took that skateboard from my room and got really good at it. And the same on the guitar. He is a natural, with lightning bolts shooting out of his fingers. We had great times learning all our favorite songs. Then we would go to a punk show. Everyone would drink huge baby bottles full of gasoline-colored water “piss” and puke off the balcony, punch each other and smash their bottles on the street. Everyone would cheer as we lept from the stage to our deaths. Then you would start a band in your friend’s garage.

PONYBOY:  What bands did you grow up listening to as a kid? Who did you idolize?

JERRIE BOY JERRIE:  The radio would be on station rock 101 KLOL driving around late at night with my mother, to meet her ex-dancer sisters who had tattoos on their forearms. I thought this was very cool. She would take me to the bar, and everyone was very amused to hear me order a Coca-Cola with a maraschino cherry. It was all put another dime in the jukebox baby, and you might as well jump, love was always a battlefield, so welcome to the jungle. Someone is burning for you, and we will rock you. There was black velvet in some kid’s eyes who was born to run in the USA.  School was out!, so everyone wanted to rock and roll all nite, and party every day. I would scratch dollar tix with my aunts, and I could stay up as late as I wanted to. Then it would be time to hit the road with dear old dad. We would drive around Texas for a couple of weeks with loads of drywall, or cement powder listening to the Dirty Deeds Done Dirt Cheap cassette over, and over. Until I would pass out on the floorboard of the truck. Later I liked the animalistic nihilist types and bands who wanted to overthrow the government. The outlaw for love characters of any genre seemed most interesting to me. 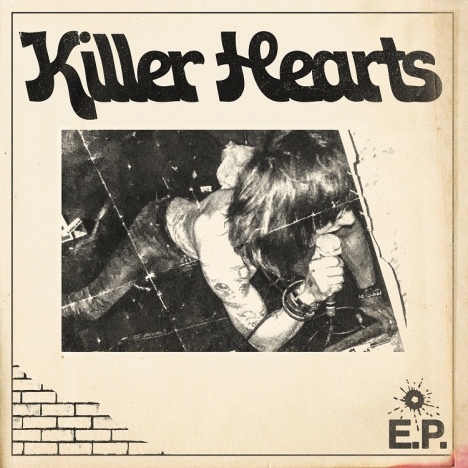 PONYBOY:  Tell us about your beautiful and twisted artwork, your paintings and your illustrations. Did you study art or is it something that you just picked up??

JERRIE BOY JERRIE:  If you really want to know what your dreams look like, paint one thousand red circles. Then watch the sunrise. I would recoil back into a child-like wonder to notice all the overwhelming beauty all around me. That I’m forced to ignore in order to survive, you gotta get to the world on time. Can’t be staring at roses all day. Painting is a serene practice. One day the heavens open up, and a metal Vladimir spike is driven into the center of your brain. You see a vision of a desert scene with fleshy ballet dancers and actors in a dramatic pose. Drooling like an animal at slaughter. So you try to draw that.

PONYBOY:  We love the evolution of your present-day look, it’s very unique. Who would you say your style inspirations are?

JERRIE BOY JERRIE:  All the junkshop glam rock ultra-human dynamos. Edvard Munch. Sly Stone, Parliament. Stuff like that. “Dress for the job you want “says authoritarian whomever. Strike the chord of an angel’s heart. It’s all part of the ritual. If a beautiful woman is marching out the door with a suitcase in hand. you might blow a fireball into the night air, freezing an image or yourself into her mind’s eye forever. Forgotten is your armor and charms. As Cinderella’s dress, your skin bag is ripped to shreds exposing the mutant larvae that you truly are. Squirming on the floor through the empty jars of nectar. With the cremated ashes of your dead love smeared on your face. Then you’ll find her lipstick and put it on, just to feel her kiss again.

PONYBOY:  Who made that incredible jumpsuit that you wear on stage?

JERRIE BOY JERRIE:  Canadian designer Cat Black of Wax Lips Boutique created the jumpsuits. An extremely talented artist whose work is full of beautiful violence, and gorgeously grotesque amenities. A fashion star. Pure genius with more creative energy than most anyone I have ever met.

PONYBOY:  From what we’ve personally experienced, your live shows are so electrifying and dynamic. How would you describe a Killer Hearts performance?

JERRIE BOY JERRIE:  A thirty-minute highlight reel. Nonstop action, and intrigue. Edge of your seat panty puked to the side drama. A horned-up sonic onslaught. A rollercoaster ride through the gates of hell. An orgasm machine. The chains of lust. A cautionary tale. Terror thrusting erupting arousal.

PONYBOY:  Do you enjoy touring? What’s been your favorite city to play so far?

JERRIE BOY JERRIE:    I like touring, you get to exist outside the normal confines of society. You leave whatever hole you were digging at home, and completely forget it. You ask yourself…why do I even have a home, or own anything? It is an odd sensation when you actually feel alive. It’s a real blessing to get those opportunities to share your music. Fun. Any city where the audience is excited to see the group is a favorite. 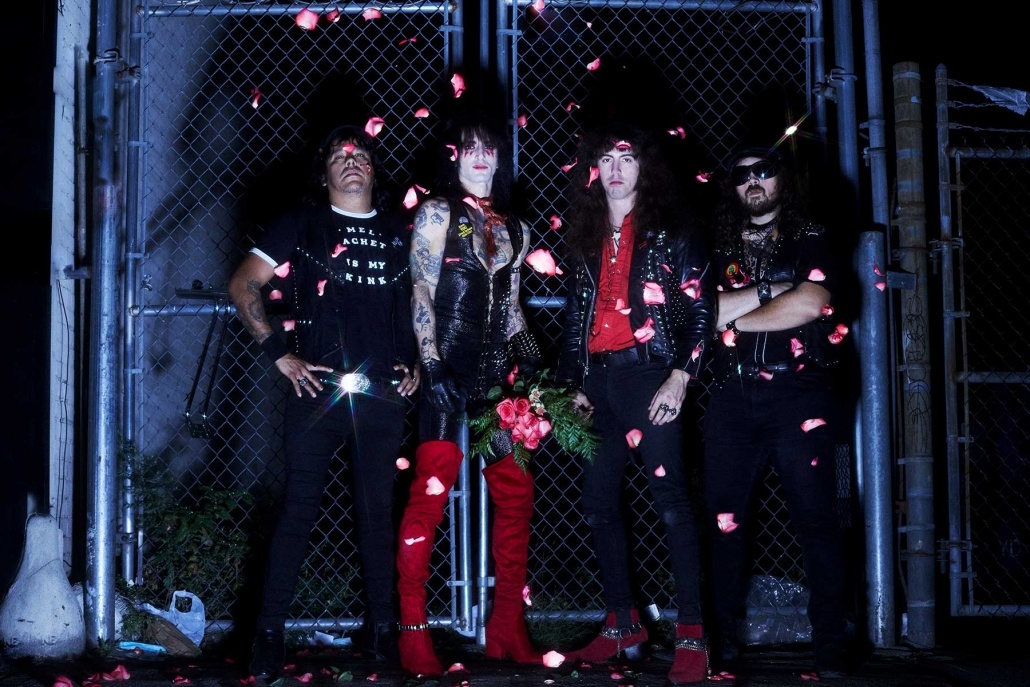 PONYBOY:  If you could tour with any band, who would that be?

JERRIE BOY JERRIE:    Regional shows next few months and a couple of festivals. A tour in September. Recording now for another EP, which might turn into an LP, who knows…for Spaghettytown Records. Dropping the new single next week 3/15/22, on a split 7-inch limited pressing with LJ & the Sleeze on Eightball Records.