If Debbie Harry and Chrissie Hynde were to have a love child, it would be Los Angeles-based musician Kate Clover. Kate is not just known for her dreamy blond good looks, but also for the dynamic energy that she puts into both her music and her performances on stage. We first fell in love with images we saw of Kate in a black tuxedo on Instagram, serving us Brigette Bardot realness. Kate really doesn’t look like she comes from a sunny California lifestyle, but more so from the glamorous dirty grit of a London or New York. She appears strong and confidant, a woman who knows what she wants and just how she’ll get it. This girl just oozes rock ’n’ roll. She’s teased us with EP’s. But we, as well as many other music fans, eagerly await a full-fledged album that we can continuously play over and over again on our turntable.

Brandon Welchez is a very talented musician, the other half of the very well-known musical project known as Crocodiles. He is also the musical collaborator/boyfriend to Kate Clover. In photos, as well as in person, Brandon exudes an uber-coolness, very reminiscent of ’80s icon John Lurie from the Lounge Lizards. Although on the modest side, he manages to come across as a natural, whether he’s dressed in a suit or in a t-shirt and jeans. He deejays in his spare time, spinning the best of old-school punk from his vinyl collection. And as lead vocal in Crocodiles, we are enamored with both his voice and the music, a trippy, noisy and distorted musical experience. We need some new Crocodiles releases in our life!

Simply said, these two are a match made in rock ’n’ roll heaven!

PONYBOY:   Kate! You’re a California girl. Tell us what it was like for you growing up in LA.

KATE CLOVER:   It’s interesting growing up in a city that people aspire to live in. You feel like you are starting backwards.

PONYBOY:   When and how did you learn to play guitar?

KATE CLOVER:    I learned to play guitar as a teenager. I took a few lessons and as soon as I learned some chords I realized I could teach myself.

PONYBOY:   Who were some of your favorite bands growing up? And what bands are you passionate about now?

KATE CLOVER:   I loved X, the Gun Club and the Germs. There are so many great bands right now! Death Valley Girls, Niice, Slaughthouse, Public Eye, and Dion Lunadon’s new solo project to name a few. 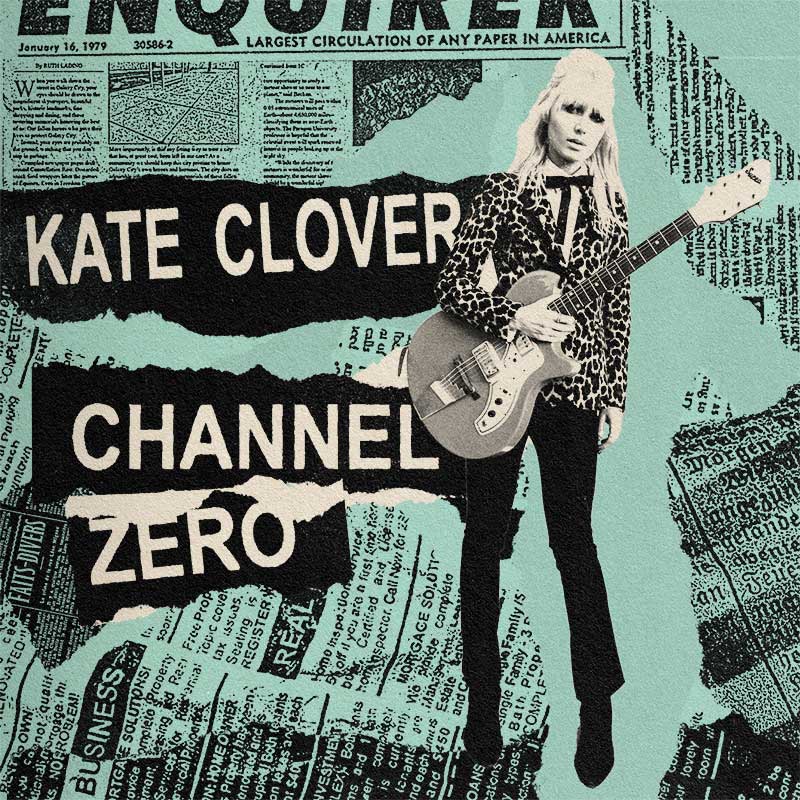 KATE CLOVER:   If Exene fronted a band with members of the Buzzcocks and the Gun Club.

PONYBOY:    Your debut EP, “Channel Zero” is amazing. We read that you recorded it during a stay in Mexico?

KATE CLOVER:   Yes. I was recorded at Vesubio Studios in Mexico City. I was supposed to stay for four days and ended up staying for four months. Mexico City stole my heart.

PONYBOY:    We love the videos that you’ve made. Our favorite is “Tearjerker”, with Neon Music who we featured on Ponyboy a few years back. Do you come up with the concepts yourself? They look like a lot of fun to shoot! 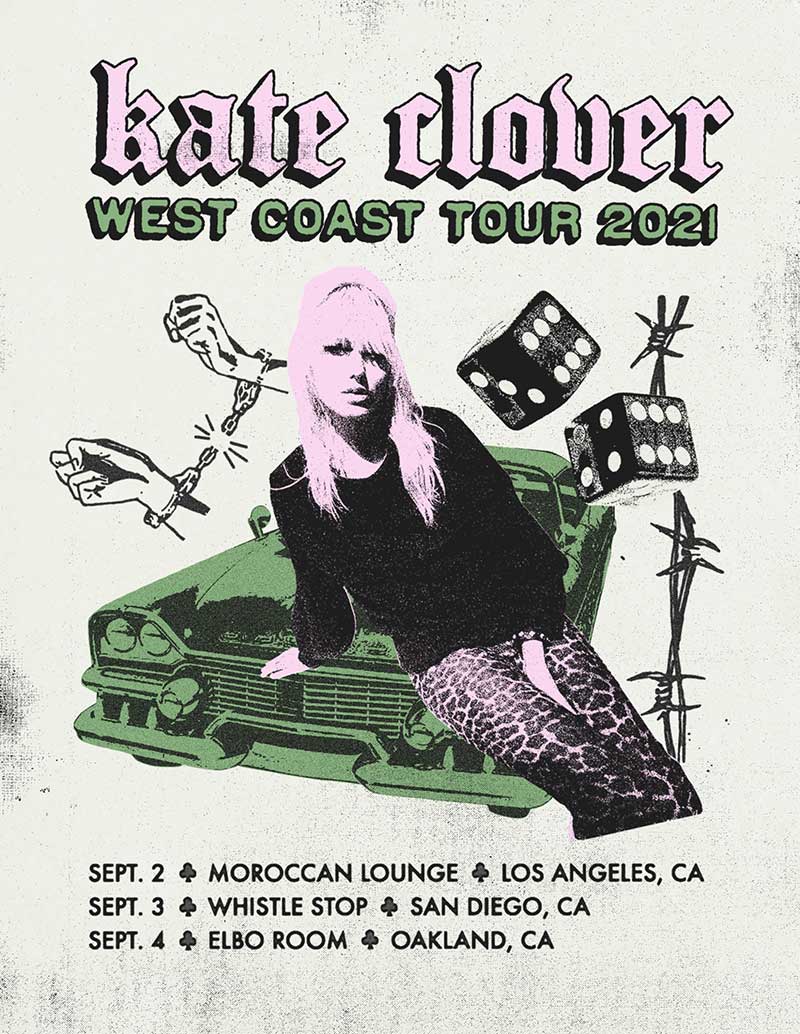 KATE CLOVER:   All of the videos are created with my friend and director Rebecca Knox. I love telling simple stories and creating fantasy worlds that are as kooky and surreal as I can imagine.

PONYBOY:  Watching you play on stage is electrifying. Do you enjoy touring? Do you have any upcoming tour dates planned?

KATE CLOVER:  Thank you! I love touring and it’s been hard being on the sidelines for so long. I have a few select tour dates in September and we’re booked to play the Freakout festival in November – much more to come!

PONYBOY:   How did you and musician Brandon Welchez meet?

KATE CLOVER:    In the cosmos…

PONYBOY:   Brandon is producing your debut album. Tell us what it’s like working together. When do you expect it to be released? 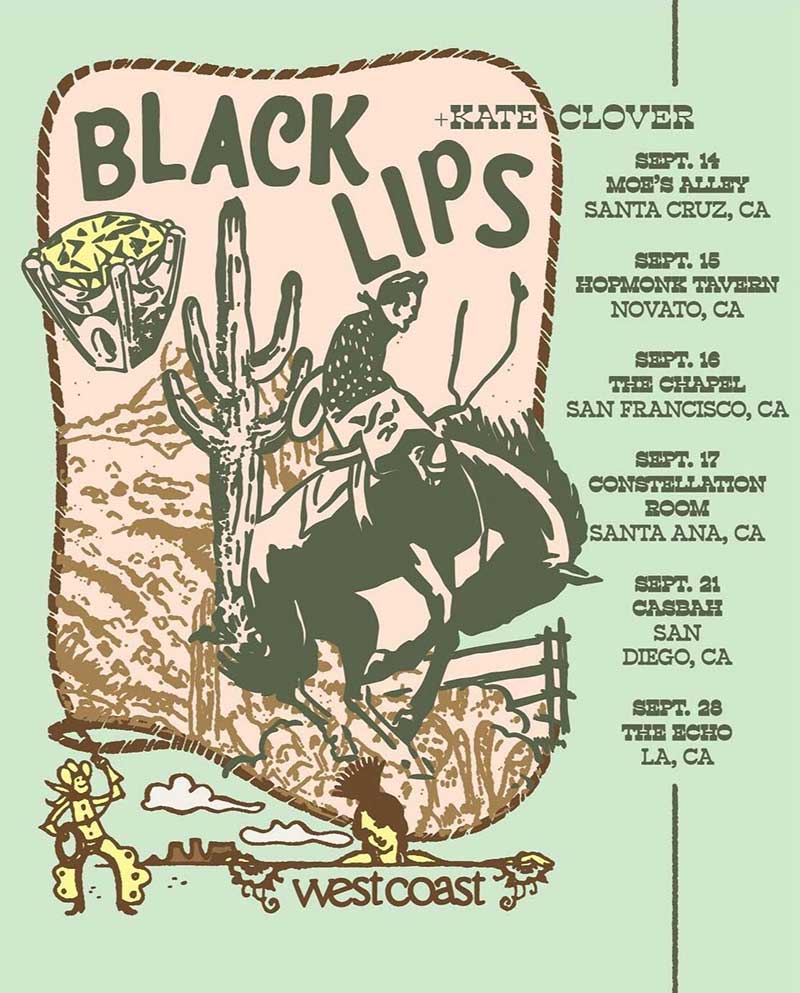 KATE CLOVER:    Brandon is one of the biggest fans of music I have ever met. His passion is contagious and it has inspired me deeply. His ethos creatively are very pure and punk. He has taught me to not second guess myself as much.

PONYBOY:   Your personal style is fantastic. In past images, it seems you wore a lot of suits/menswear in a ’60s – ’80s direction. More recently you’ve been photographed in dresses, with a nod to 50s rockabilly. Would you say it’s a style evolution for you?

KATE CLOVER:   I always dress how I feel. I like to keep things classic and tailored. People treat you differently when you wear a suit so I like to challenge that by wearing a dress on stage too. It’s ridiculous to me that most people base a lot of their opinion of a band by the way they look and dress. Everyone is going to judge you so you might as well do whatever the fuck you want.

PONYBOY:   Do you were vintage? What modern-day designers are you passionate about?

KATE CLOVER:   I love wearing vintage clothing. Collecting vintage is a hobby of mine. I don’t follow labels anymore but I always appreciate things that are well made.

PONYBOY:   We’ve heard so much from other female musicians about the sexism that they have encountered over the years, playing music in a male-dominated industry. Have you encountered that personally? And do you feel it’s changing?

KATE CLOVER:    I think there’s sexism in any work environment. I’ve certainly encountered sexism but I have also experienced a lot of kindness too. I find the good ones and stick with them and tell the shitty ones to fuck off.

PONYBOY:   What do you see for yourself in the future? As far as your music is concerned.

KATE CLOVER:   My dream is to continue to make art and play shows. I can’t wait to get back out there!

PONYBOY:   Brandon, we really love your band Crocodiles. Tell us how the band came about? Did the name of the band originate from the Echo & the Bunnymen album?

BRANDON WELCHEZ:   We’ve been around since 2008 and Charlie and I were playing in bands together for almost a decade before that, since we were teenagers. The name doesn’t come from the Bunnymen album. We were under pressure to come up with a name so we could book our first show so we just pulled something out of our asses that sounded vaguely ’60s to us.

PONYBOY:   Charles Rowell, the other half of Crocodiles, lives in Paris. Is it difficult making music, with one of you in California and the other in Europe?

BRANDON WELCHEZ:    It’s difficult to play one-off shows or to do things on the fly but writing and recording and doing tours isn’t any harder. We both pretty much write our own tunes for each album and then send them to the other for input or if we need help completing some aspect of them.

PONYBOY:   We’re crazy for the bands sound. So many great songs including “I Wanna Kill”, “Mirrors”, “Refuse Angels” and “Neon Jesus” – some of our favorites! The entire Summer of Hate album is incredible. Are you in the process of working on a new album now? 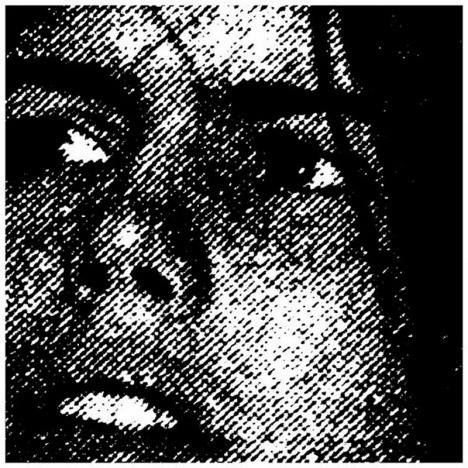 BRANDON WELCHEZ:   We are! We’ve been sending demos back and forth during the whole lockdown and finally have plans to get together in France very soon to record our eighth album. We are very much looking forward to that as this has been the longest amount of time we’ve spent apart from each other by far.

PONYBOY:   The videos the band has created are all so unique and different. Where would you say you get your inspiration from?

BRANDON WELCHEZ:   Our inspiration for videos comes from all over the place – old punk footage, Kenneth Anger films, ’80s skate VHS’s, ’90s trash television we grew up with etc. We try to work with inspiring directors and of course give them plenty of input as well.

PONYBOY:    Are most of your albums produced/recorded in Mexico City? And what would you say are the advantages of doing things down there?

BRANDON WELCHEZ:   We’ve recorded the last 3 albums in Mexico City, so yes, nearly half of our material was recorded there. We recorded there because we wanted to work with the great Martin Thulin. I was living there for years as well so it was easy to record in what was my then home base. It’s a beautiful city full of inspiring people and culture. I would still say it’s my favorite place in the world. 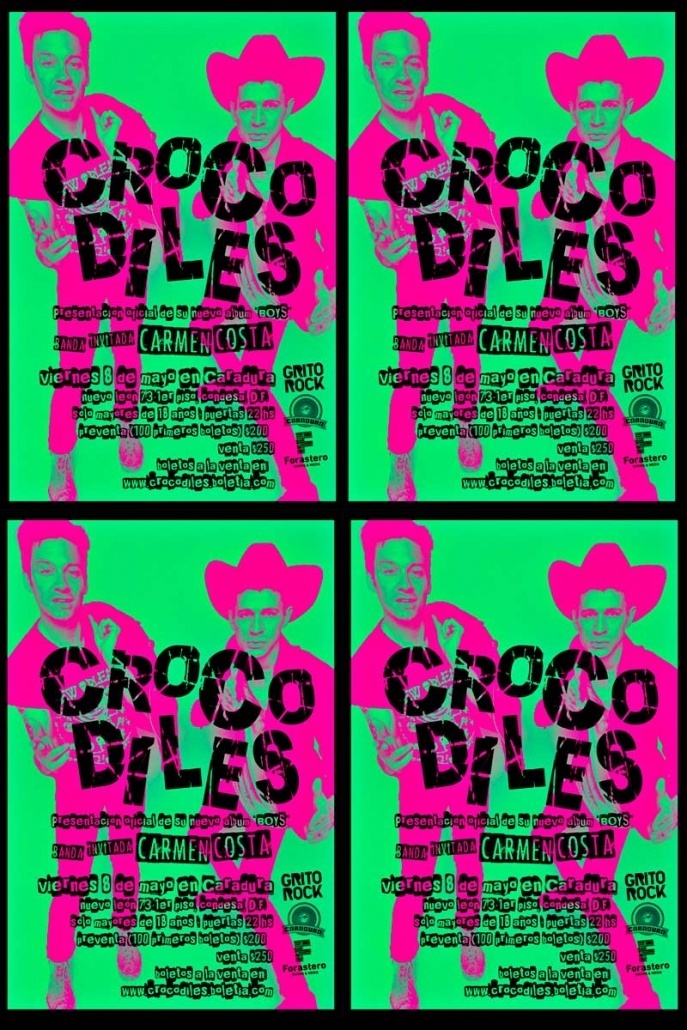 PONYBOY:    How would you say the music industry has changed since you first started the band 12 years ago?

BRANDON WELCHEZ:   The music industry seems to be the same now as it was 12 years ago and the same as it’s always been. Vampiric businessmen looking for the next thing they can make money from and then discard after it’s served its use. The musicians and artists of course are as beautiful and inspiring as ever.

PONYBOY:  What other bands have you been in?

BRANDON WELCHEZ:  Too many to name but most recently and currently: Xenu & the Thetans, Los Pao Paos and Kate’s band.

PONYBOY:   More recently you’ve produced Kate’s music. Tell us about the process of working together. And what other projects have you produced?

BRANDON WELCHEZ:    It’s pretty effortless working with Kate. We are into a lot of the same things and have many of the same reference points. Coming up with songs together was relatively easy and the recording process was like a party. I’ve co-produced a lot of Crocodiles records. I’ve done a lot of work with my friend AJ Davila of Puerto Rican legends Davila 666. I would love to do more producing in the future. 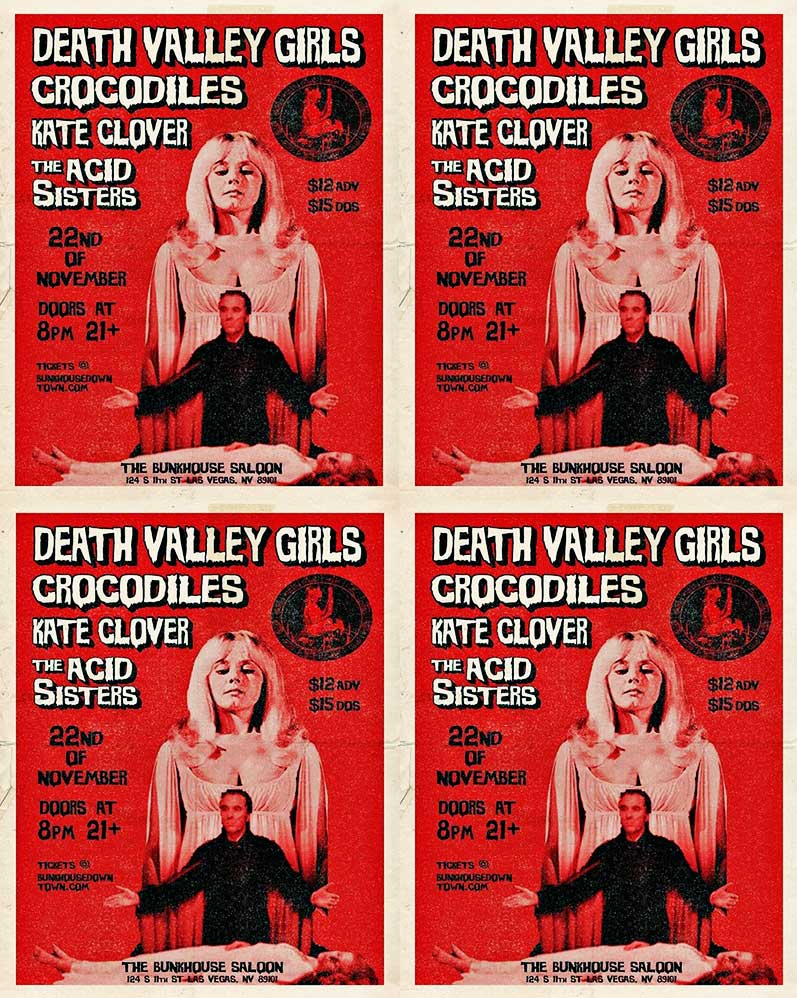 PONYBOY:   What present-day bands are you a fan of?

BRANDON WELCHEZ:   I really like the record that Smirk put out earlier this year. There is some great stuff coming from Ohio as well like the Serfs and Ultrabann. The stuff Pachy in LA is doing is very cool. I was recently turned on to the music of Roselit Bone. Sonido Gallo Negro from Mexico City is always making incredible music. I’m always hearing new stuff I dig and it can be hard to keep up.

PONYBOY:   We see on your Instagram posts that you also DJ. Tell us some of your favorite records that you like to spin from your collection. 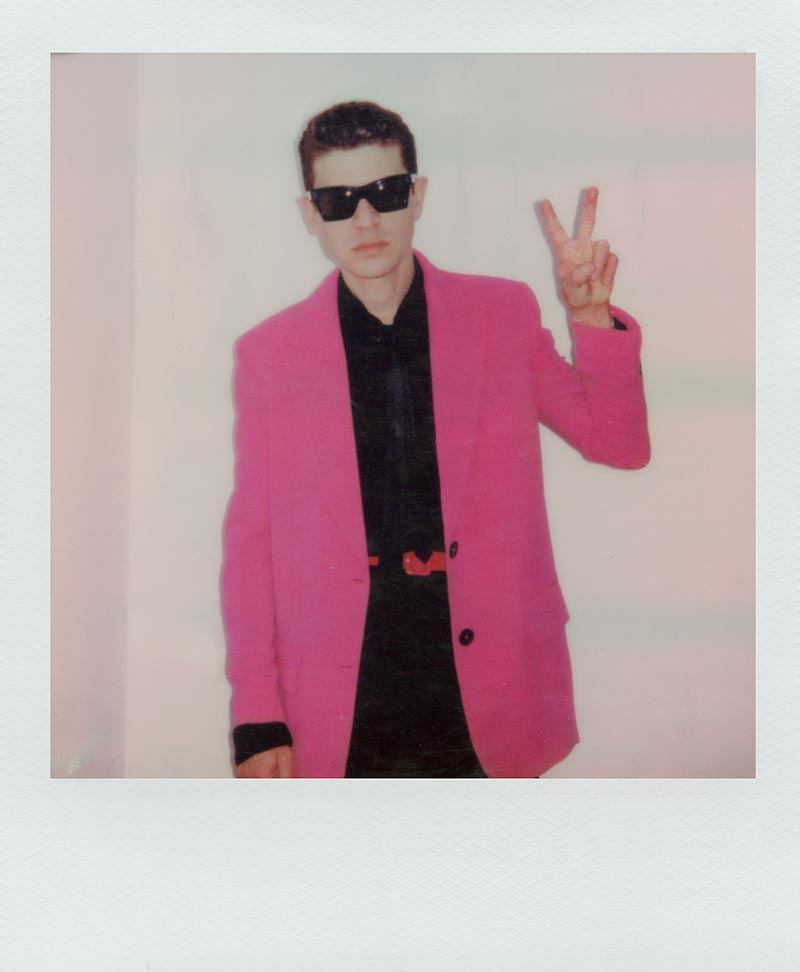 PONYBOY:   We love how you dress, your personal style – it seems very natural and you wear clothing well. Who would you say are your style inspirations?

BRANDON WELCHEZ:    I just wear whatever makes me feel good, I don’t put a ton of thought into it to be honest. I love clothes but I hate shopping and get bored quickly so I’ve more or less dressed the same way my whole adult life. I wear clothes until they fall apart.

PONYBOY:   Crocodiles have a large fan base. With things opening up, are there touring plans in the future?

BRANDON WELCHEZ:   Definitely. Charlie and his wife just had a baby a few months back so it will probably be a little while before we do any serious touring but gigs are always on our horizon.