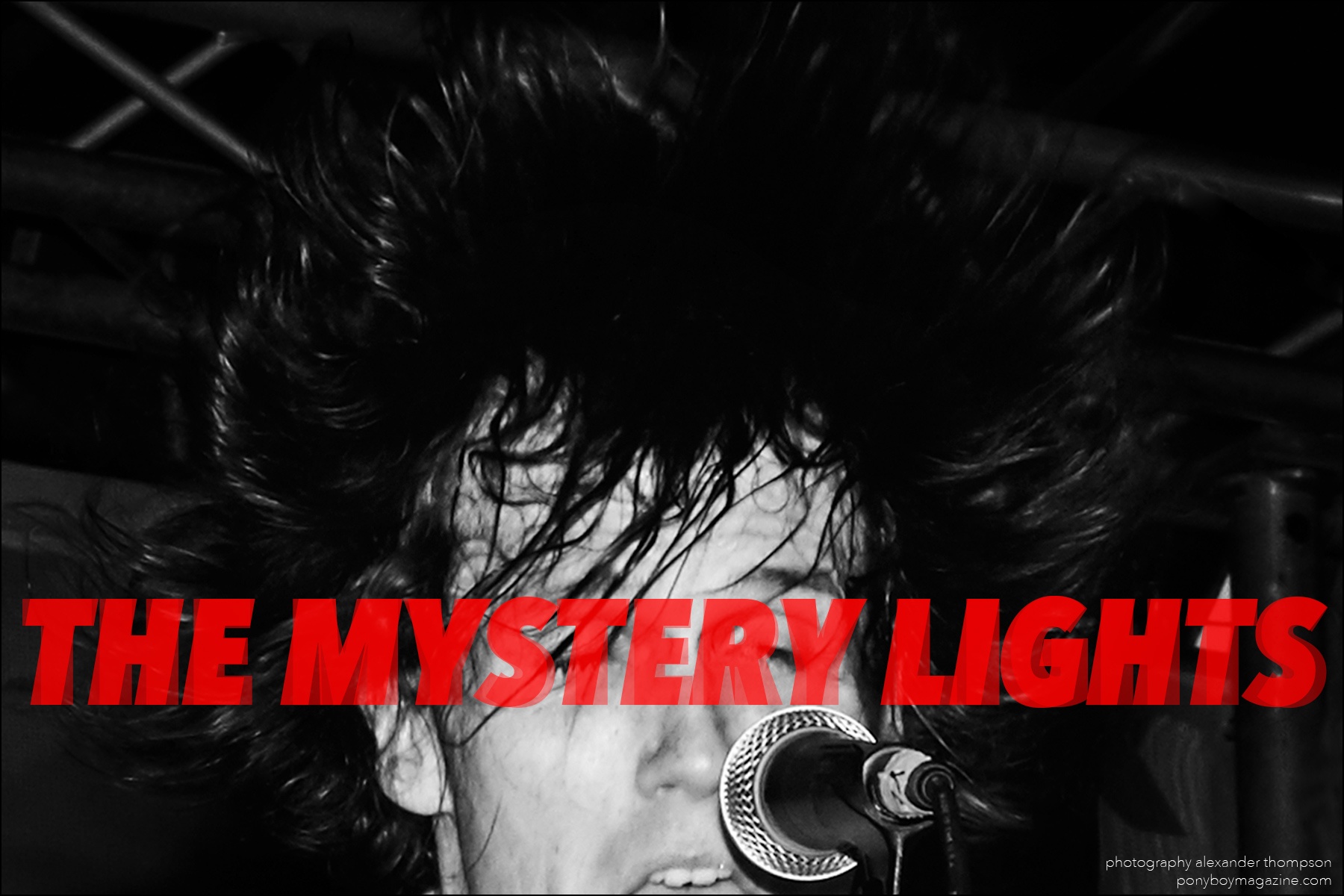 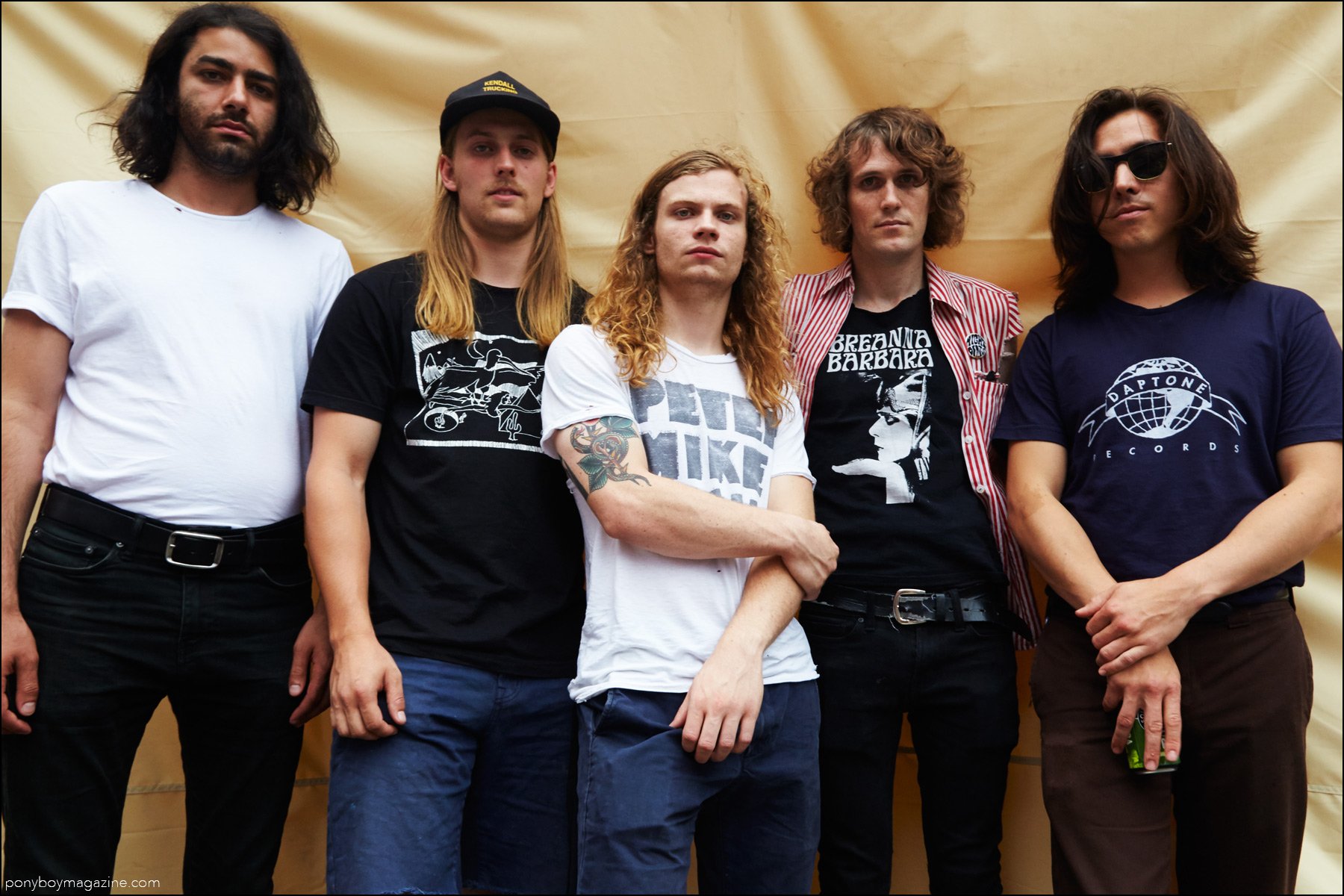 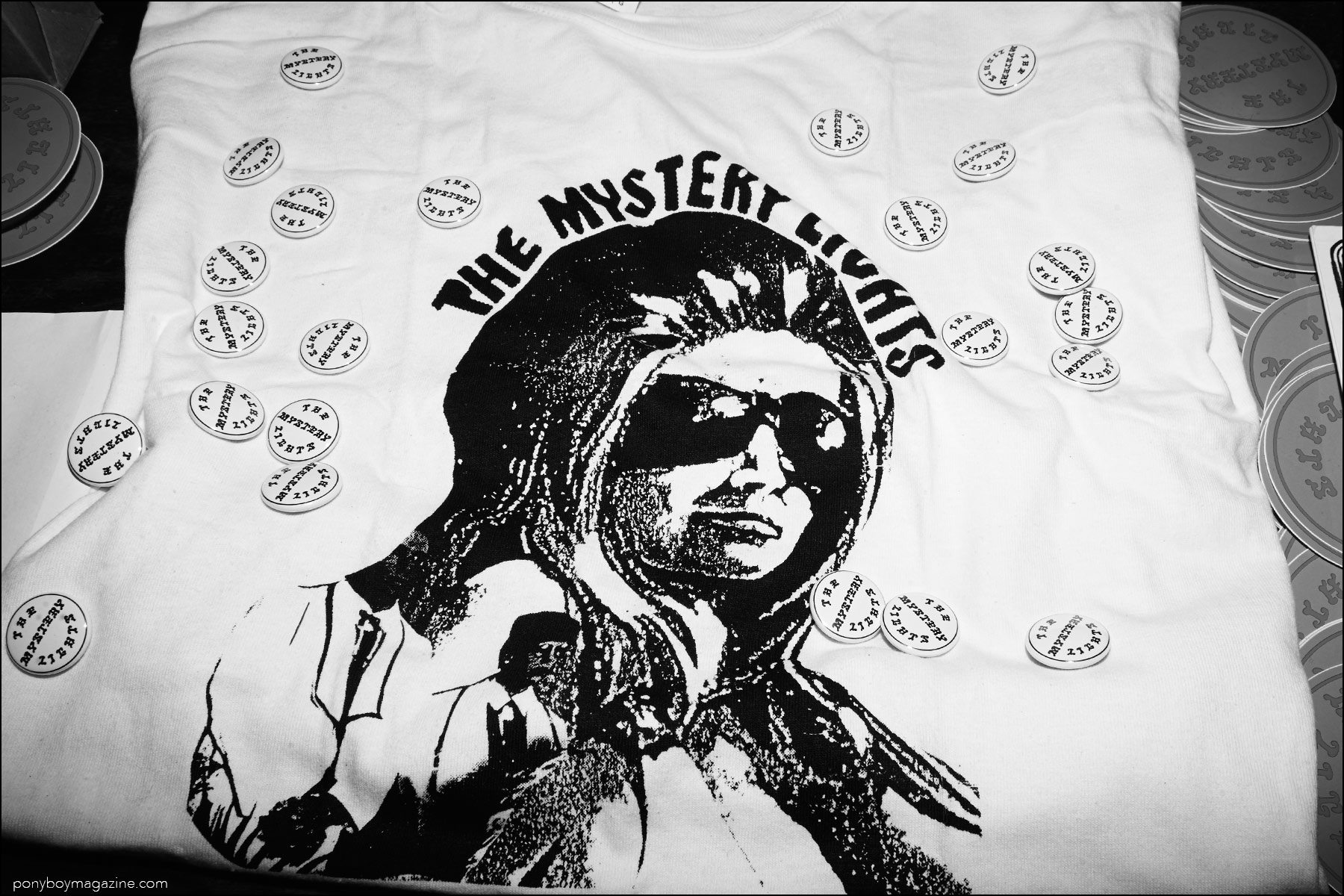 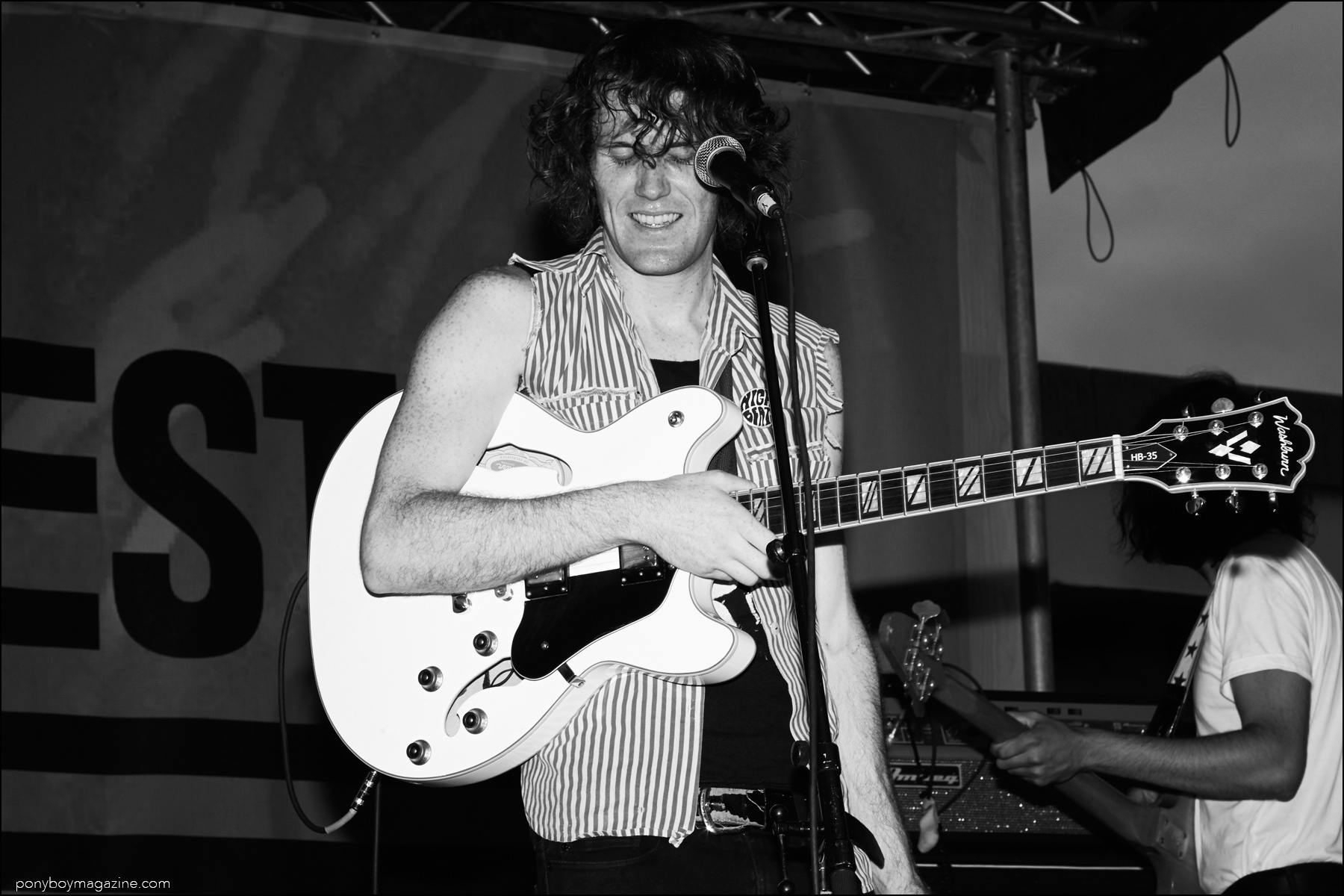 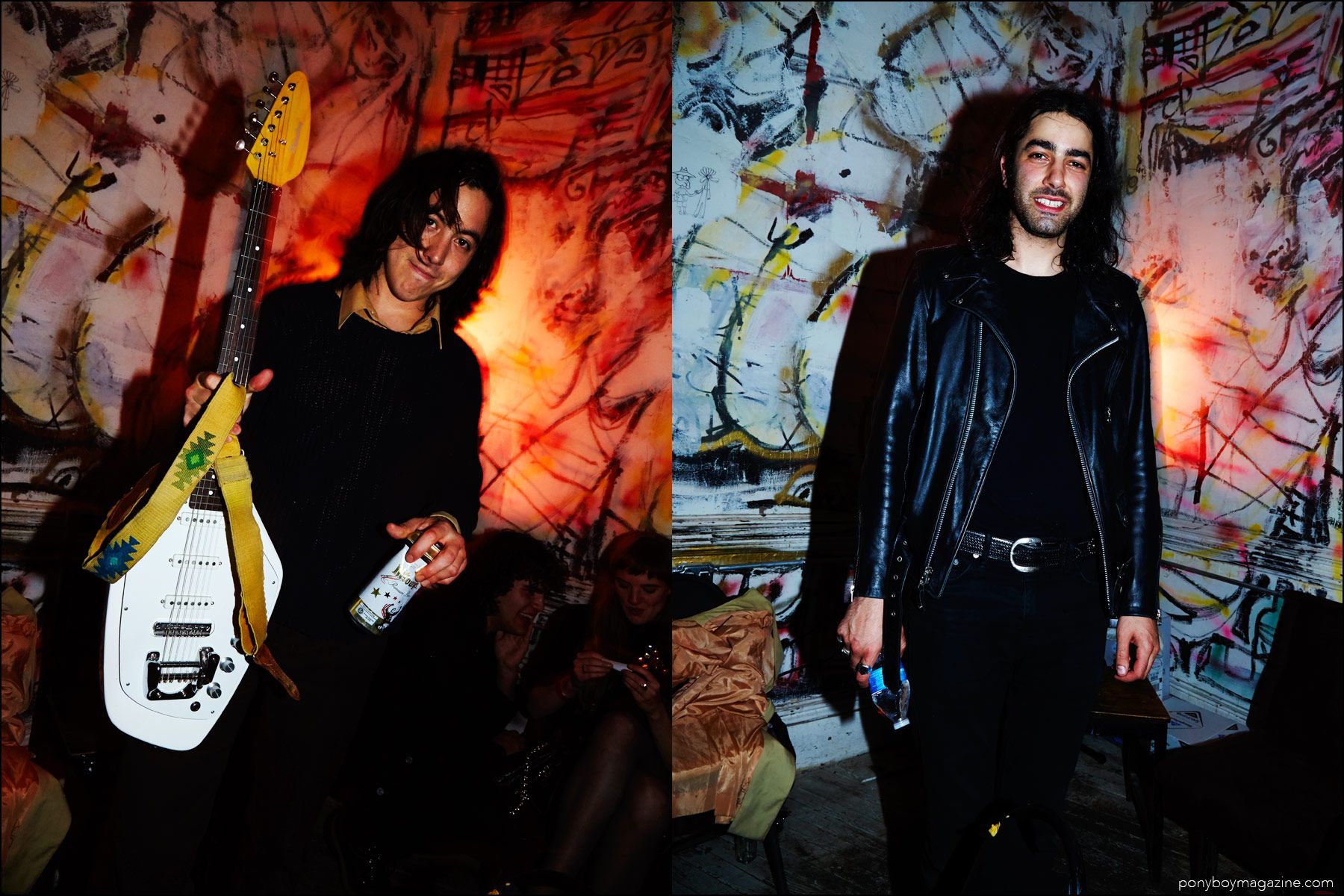 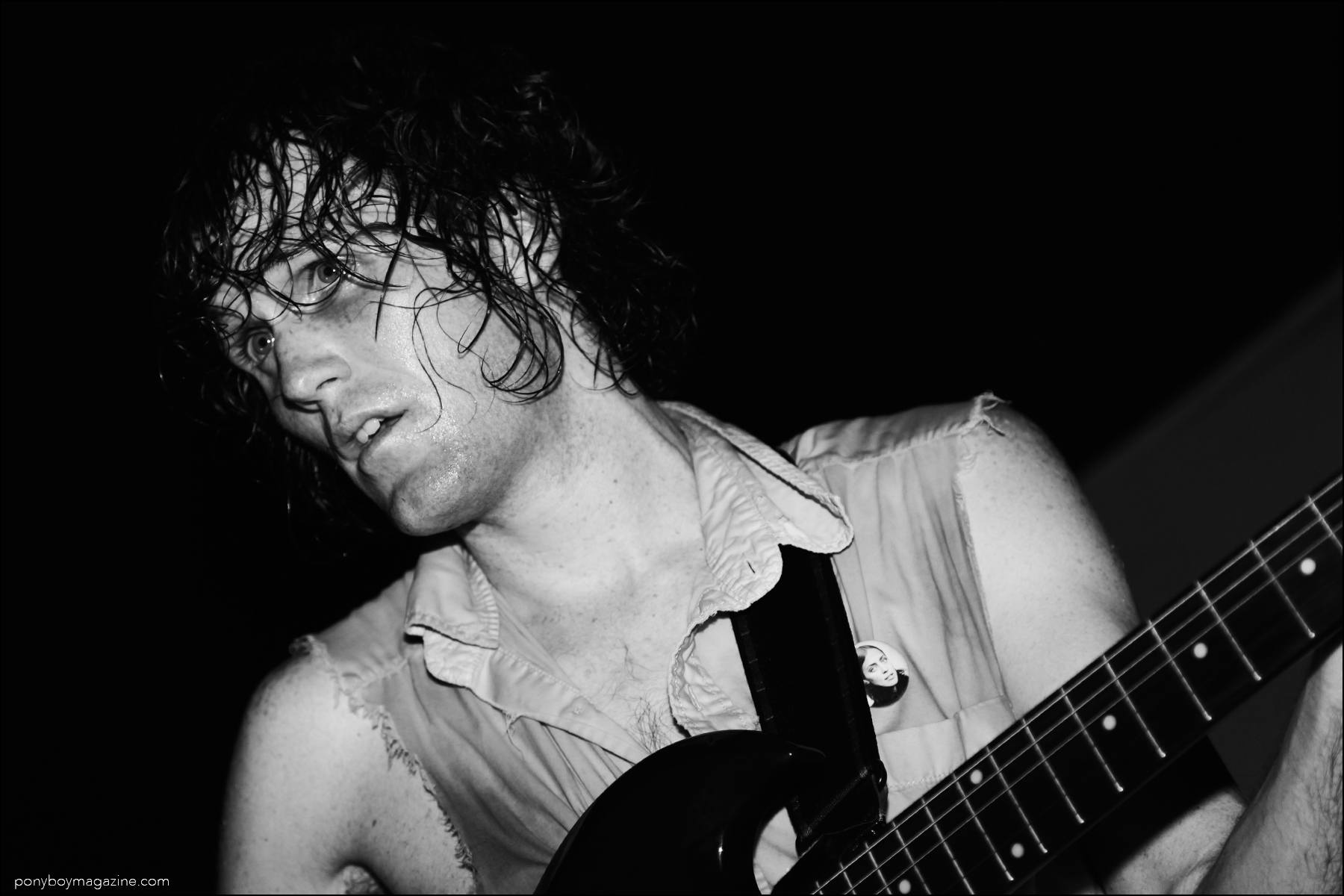 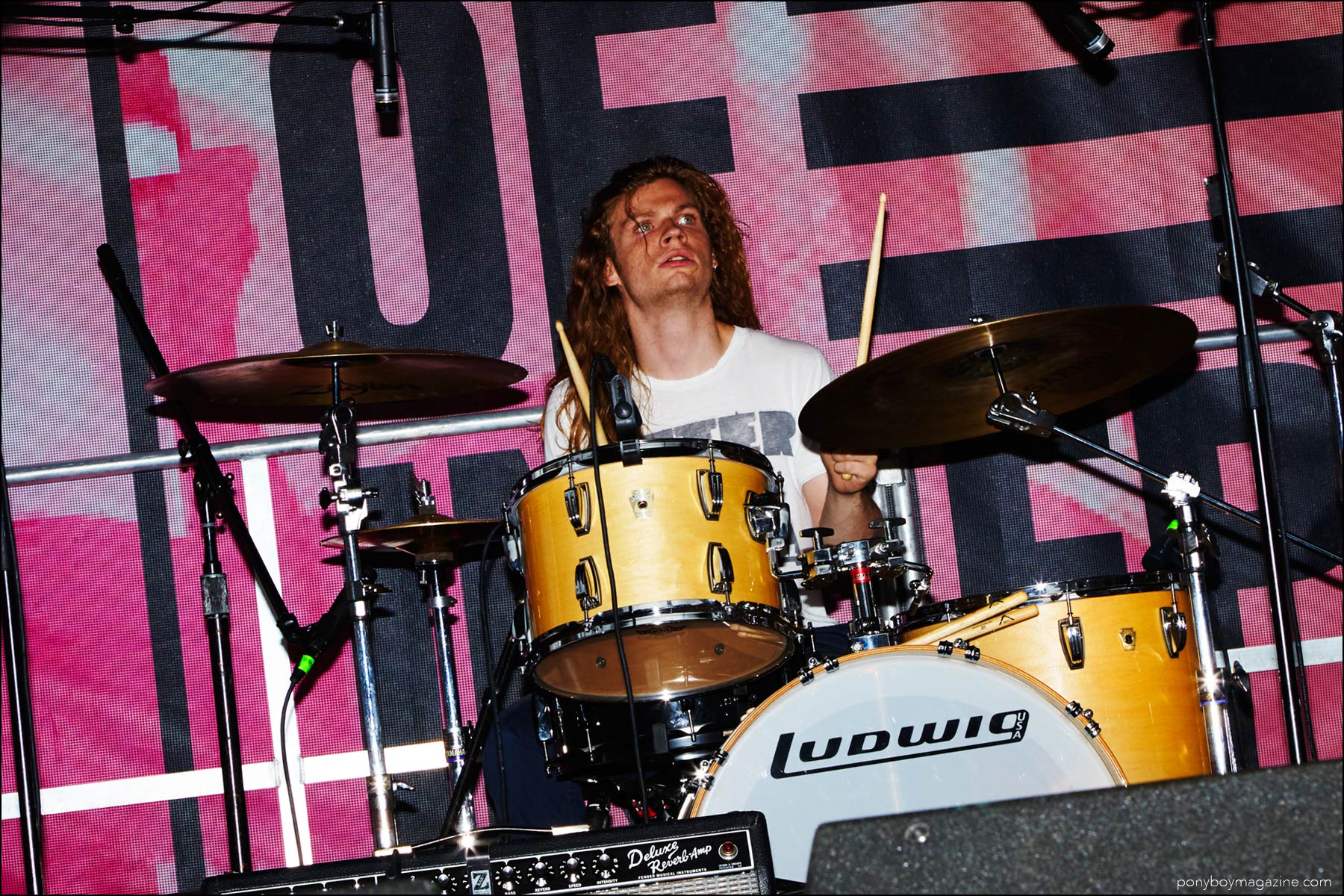 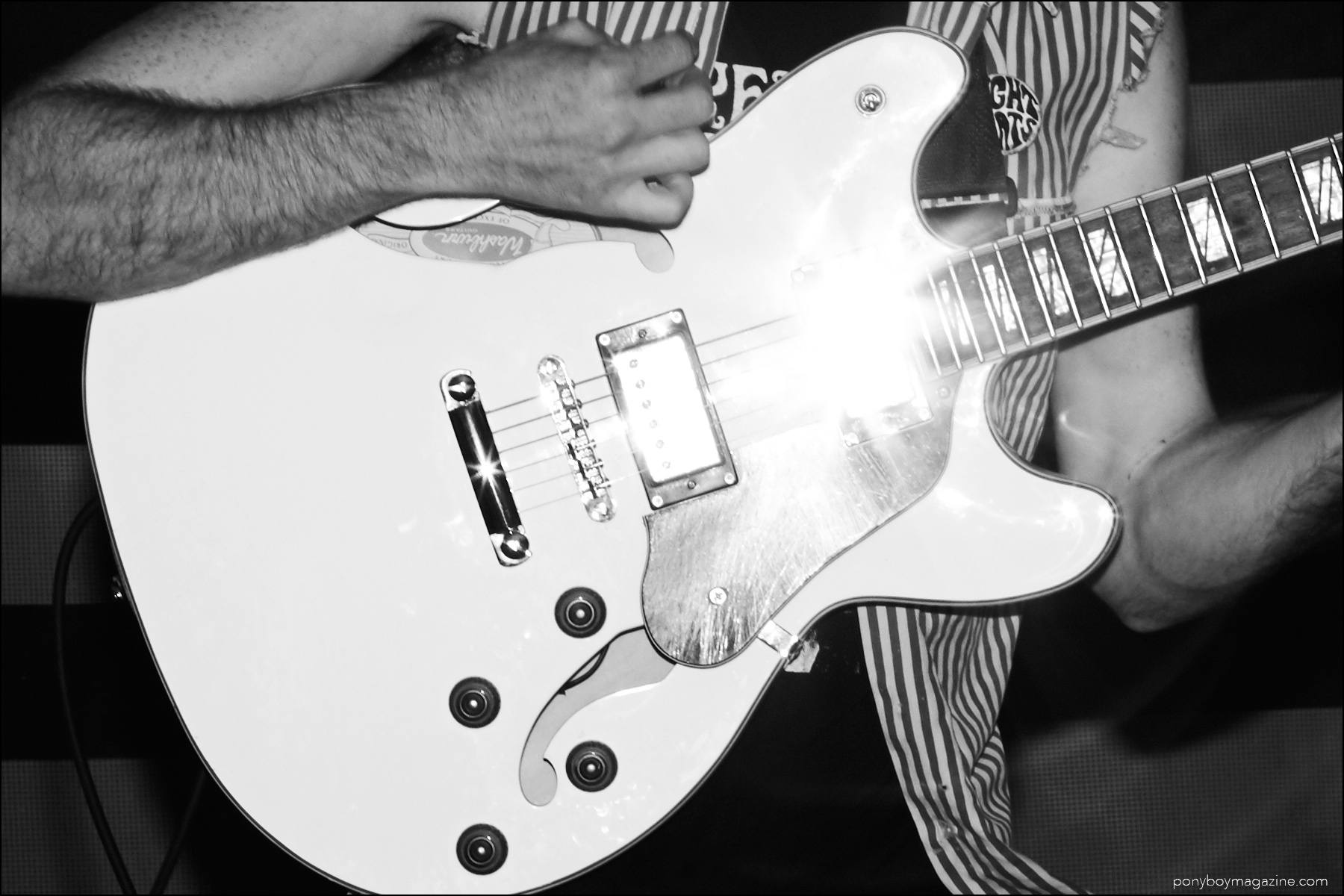 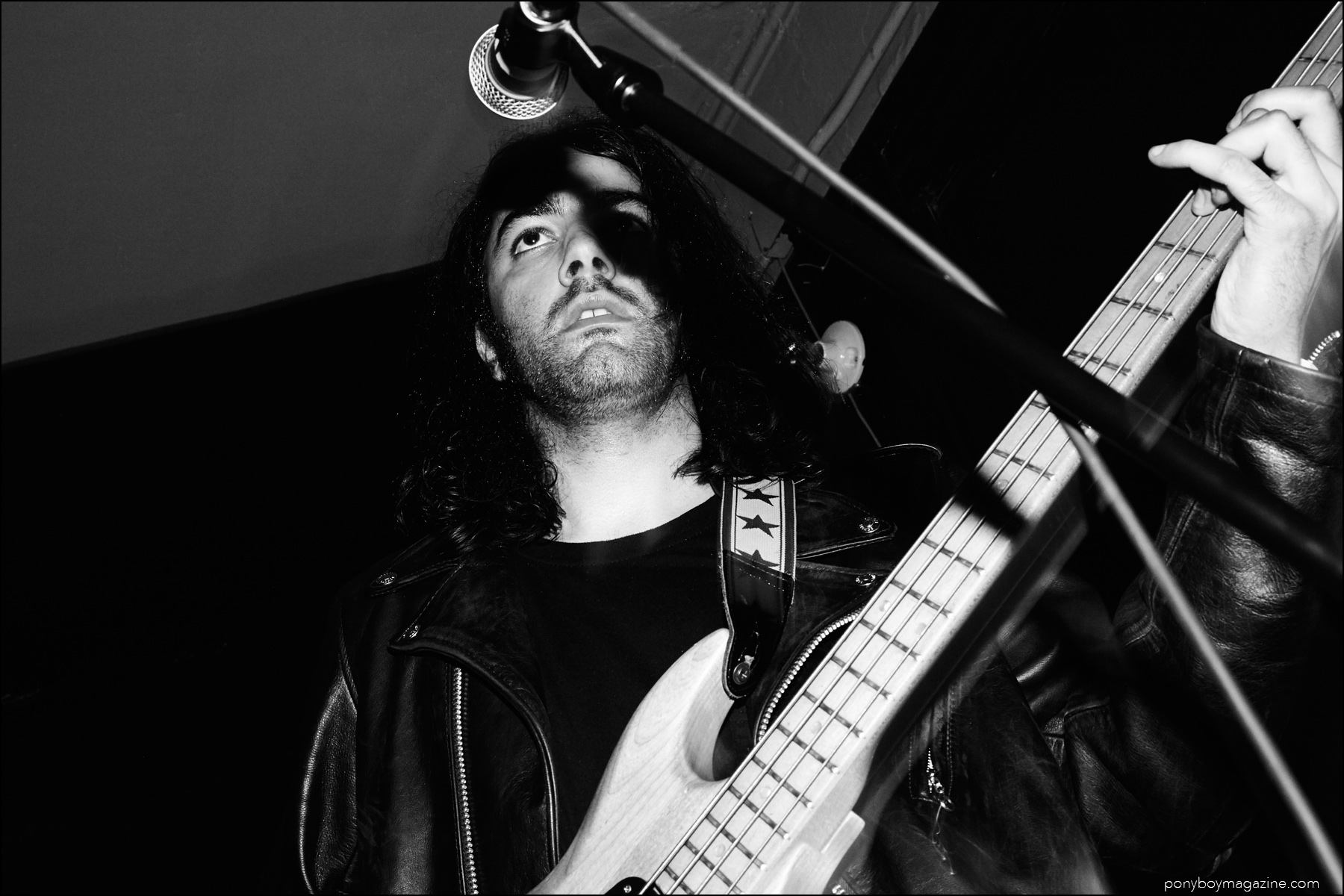 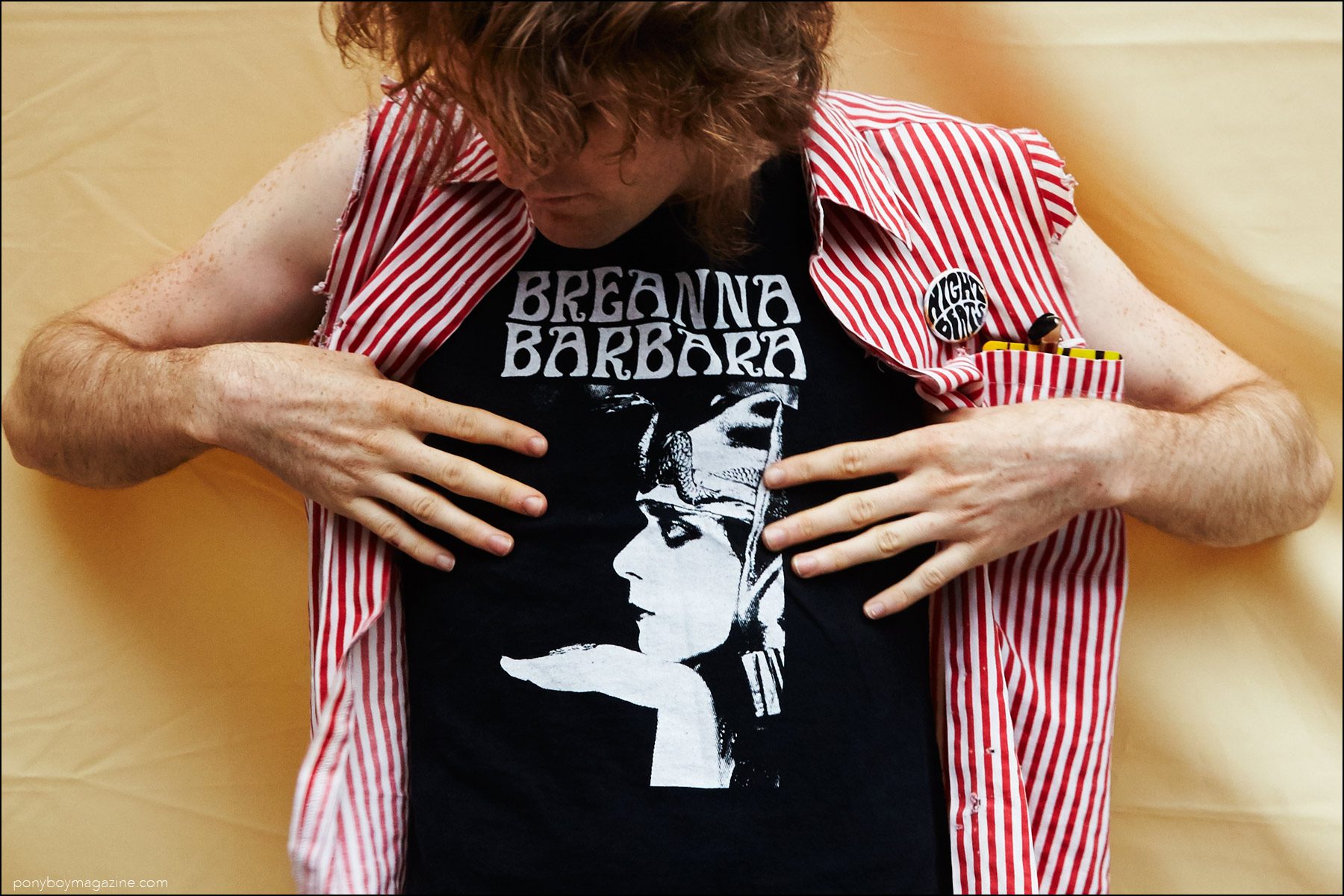 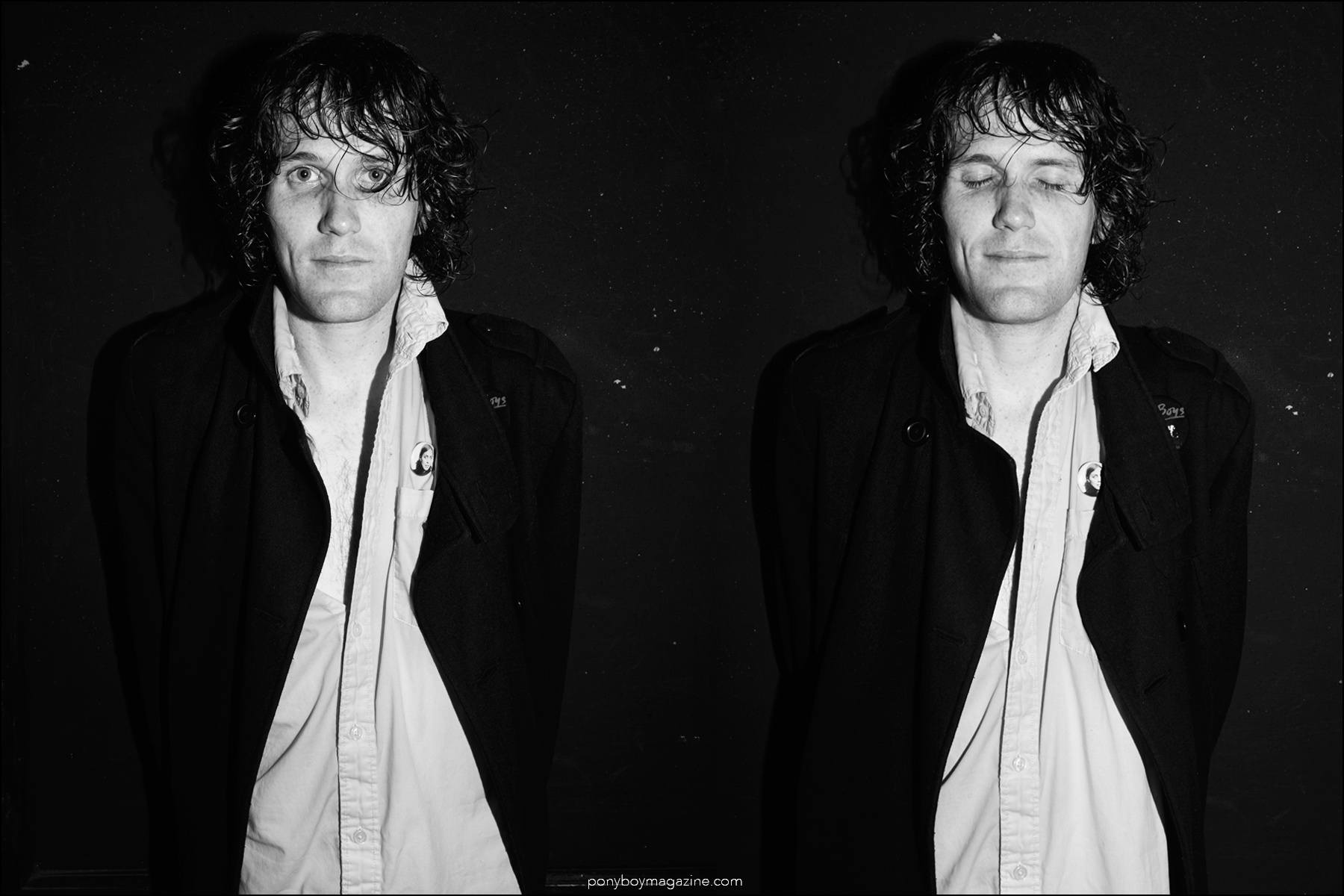 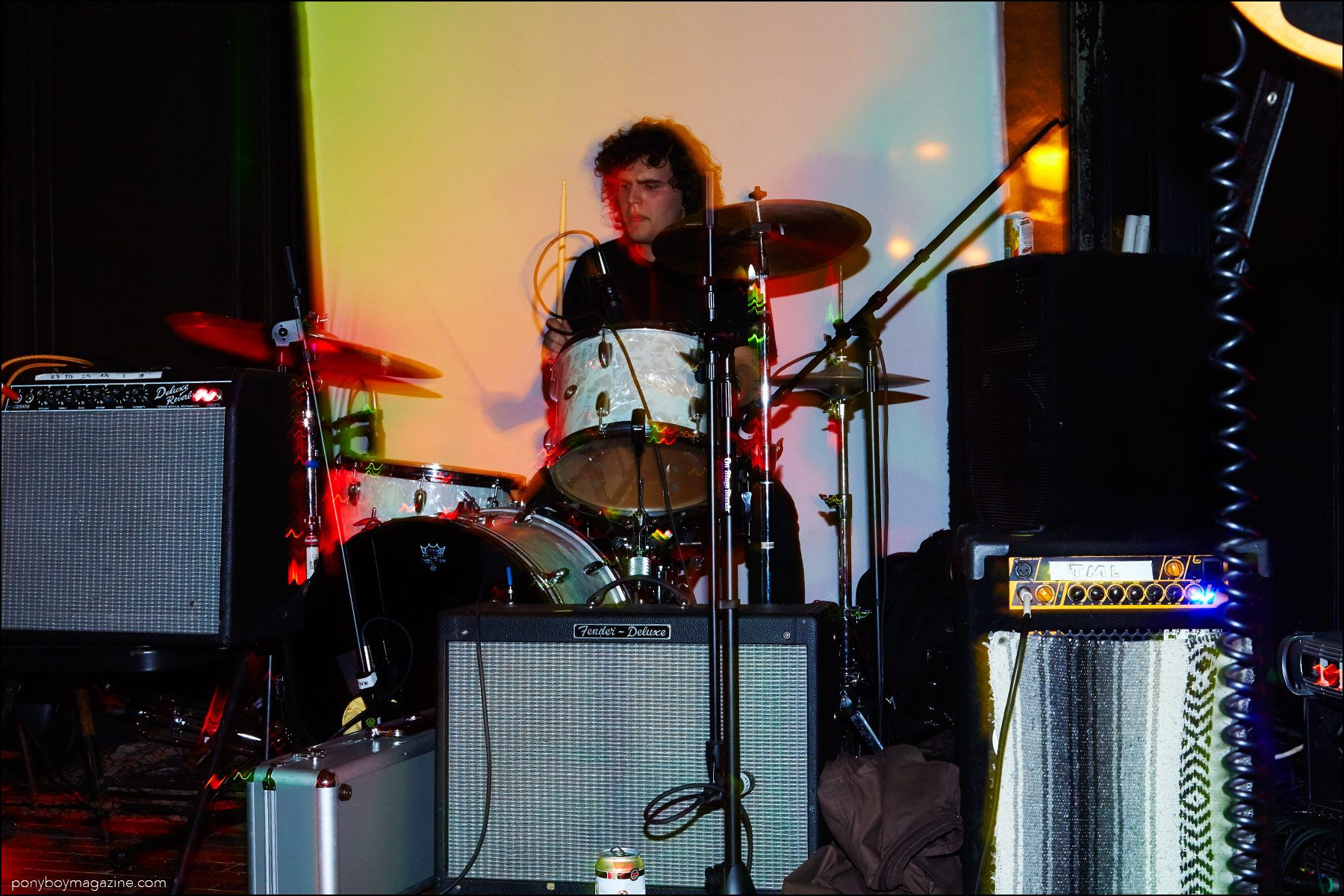 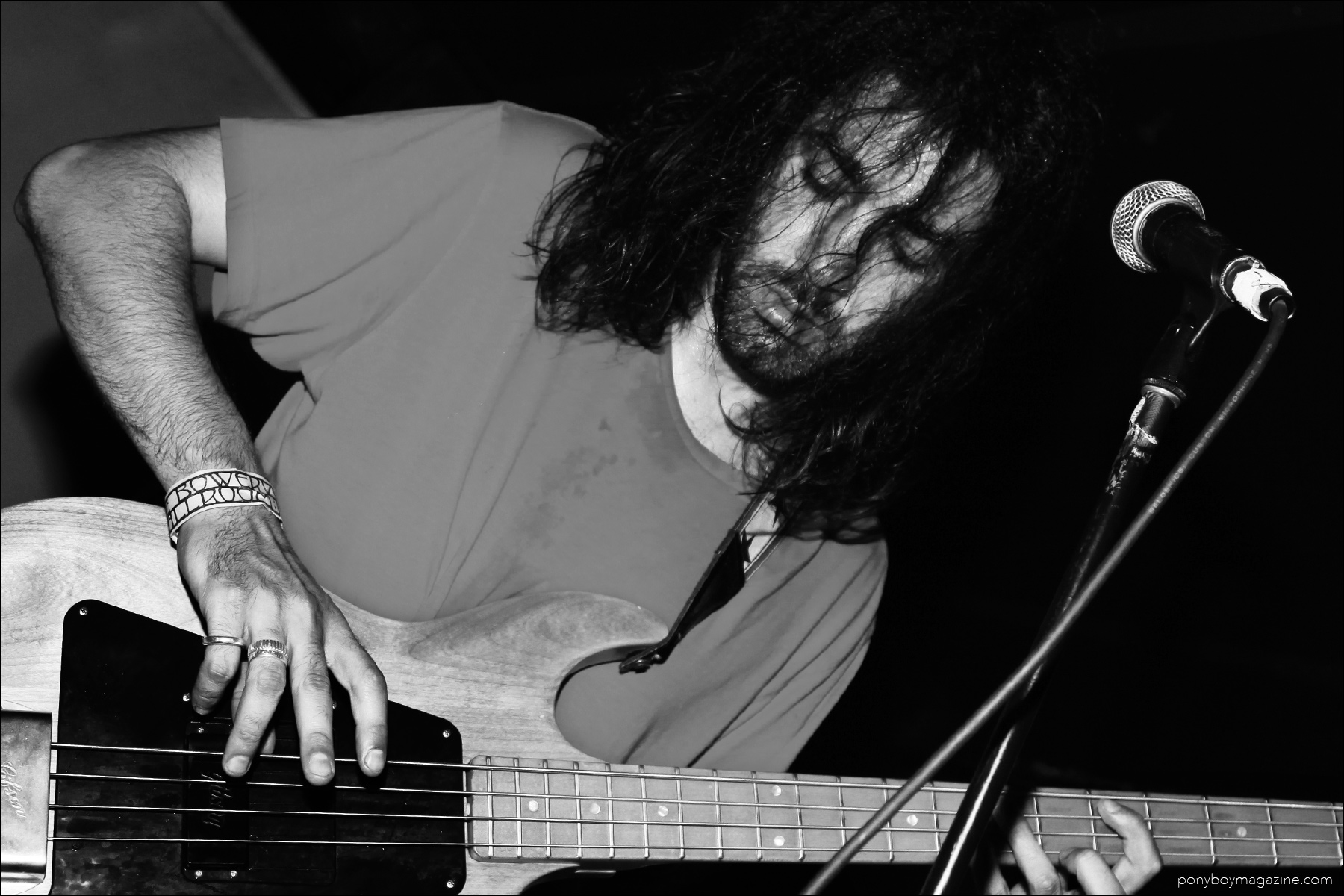 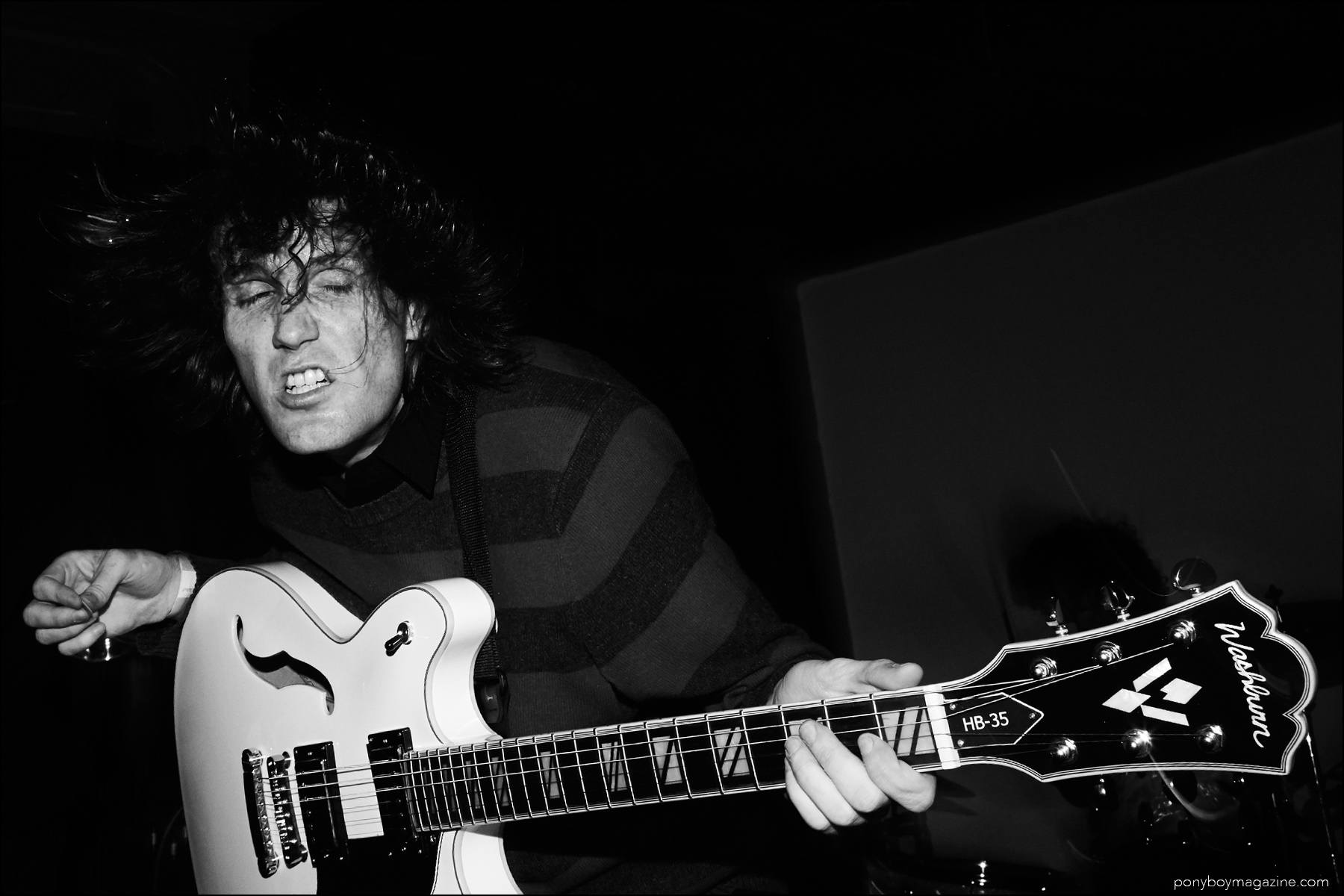 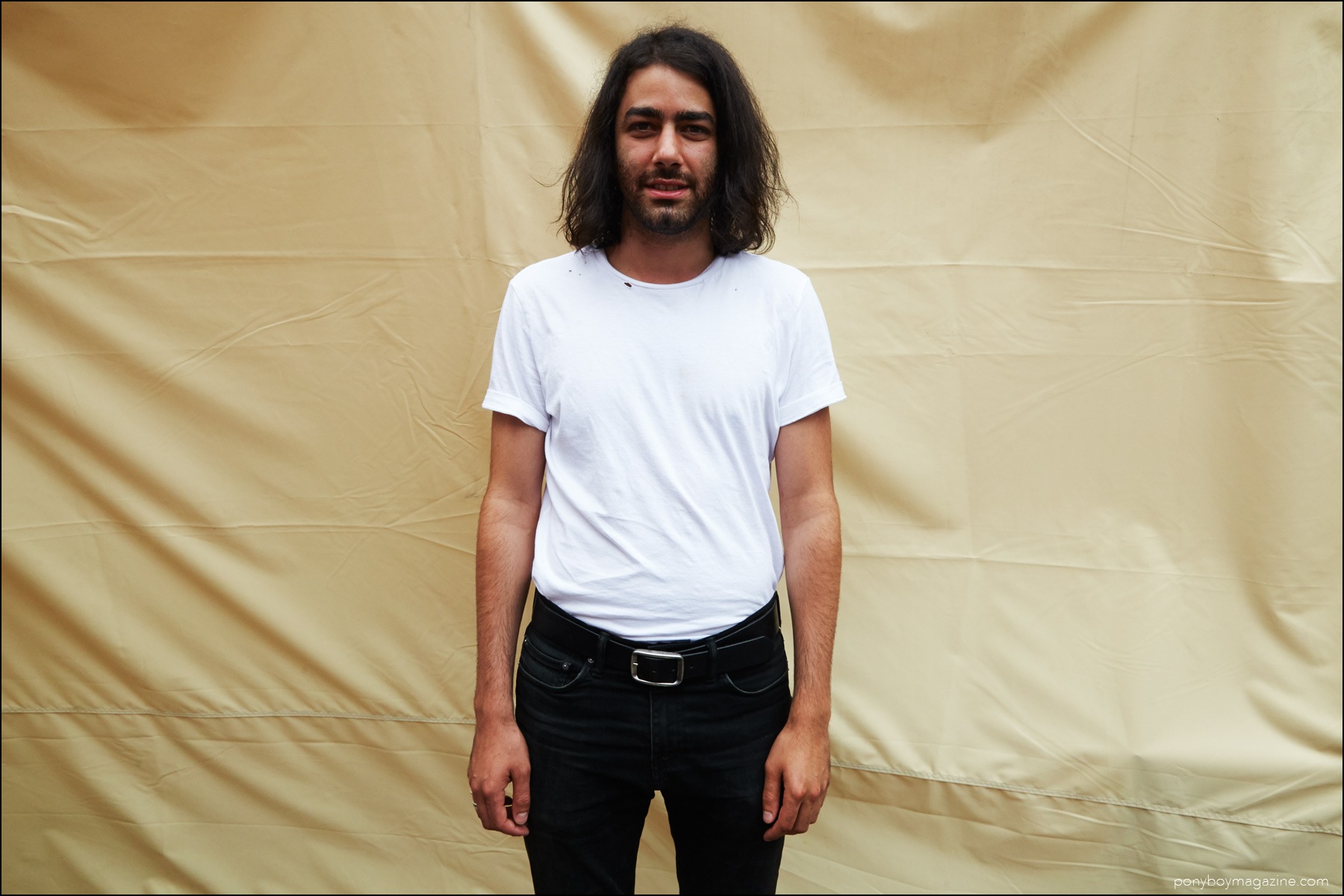 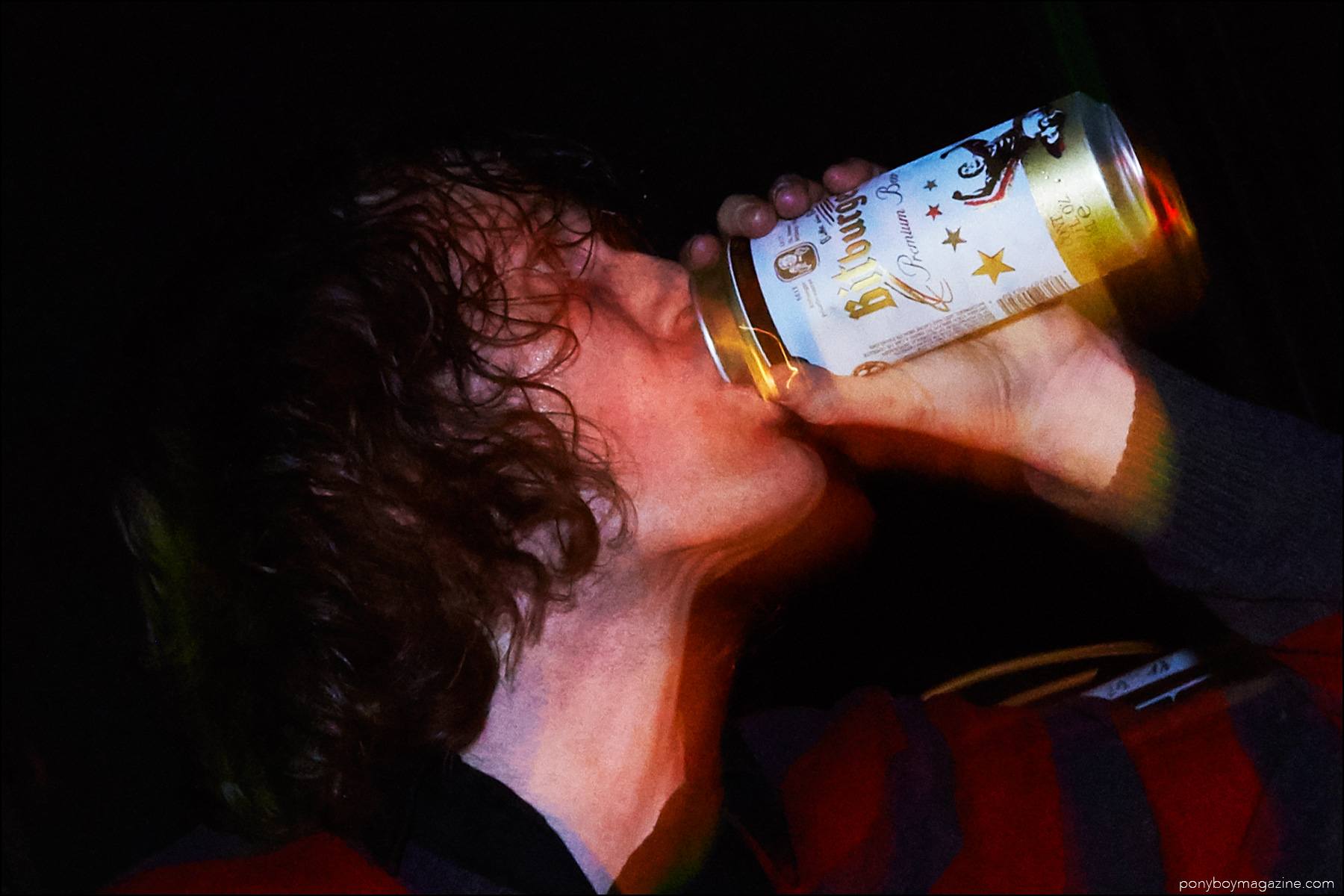 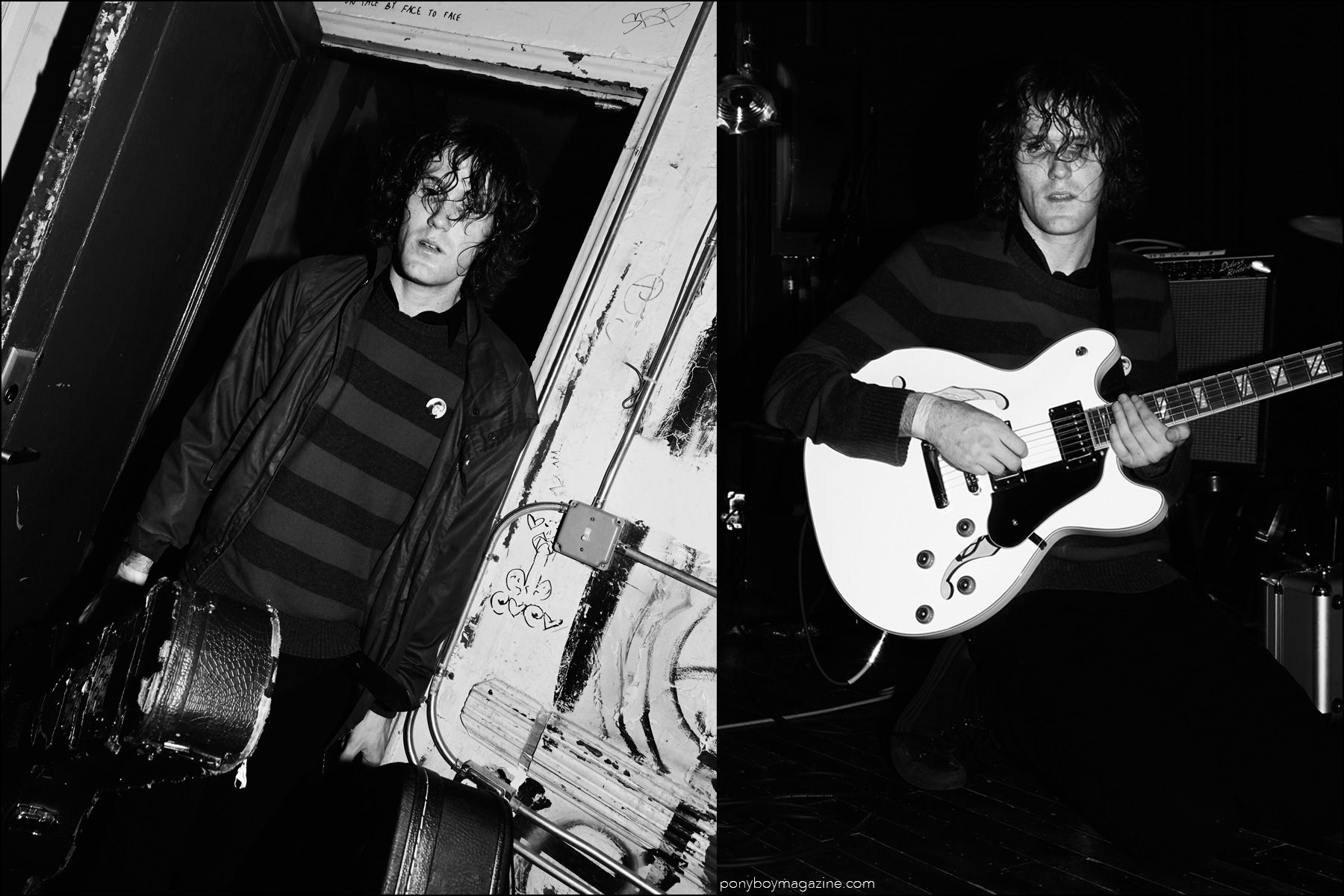 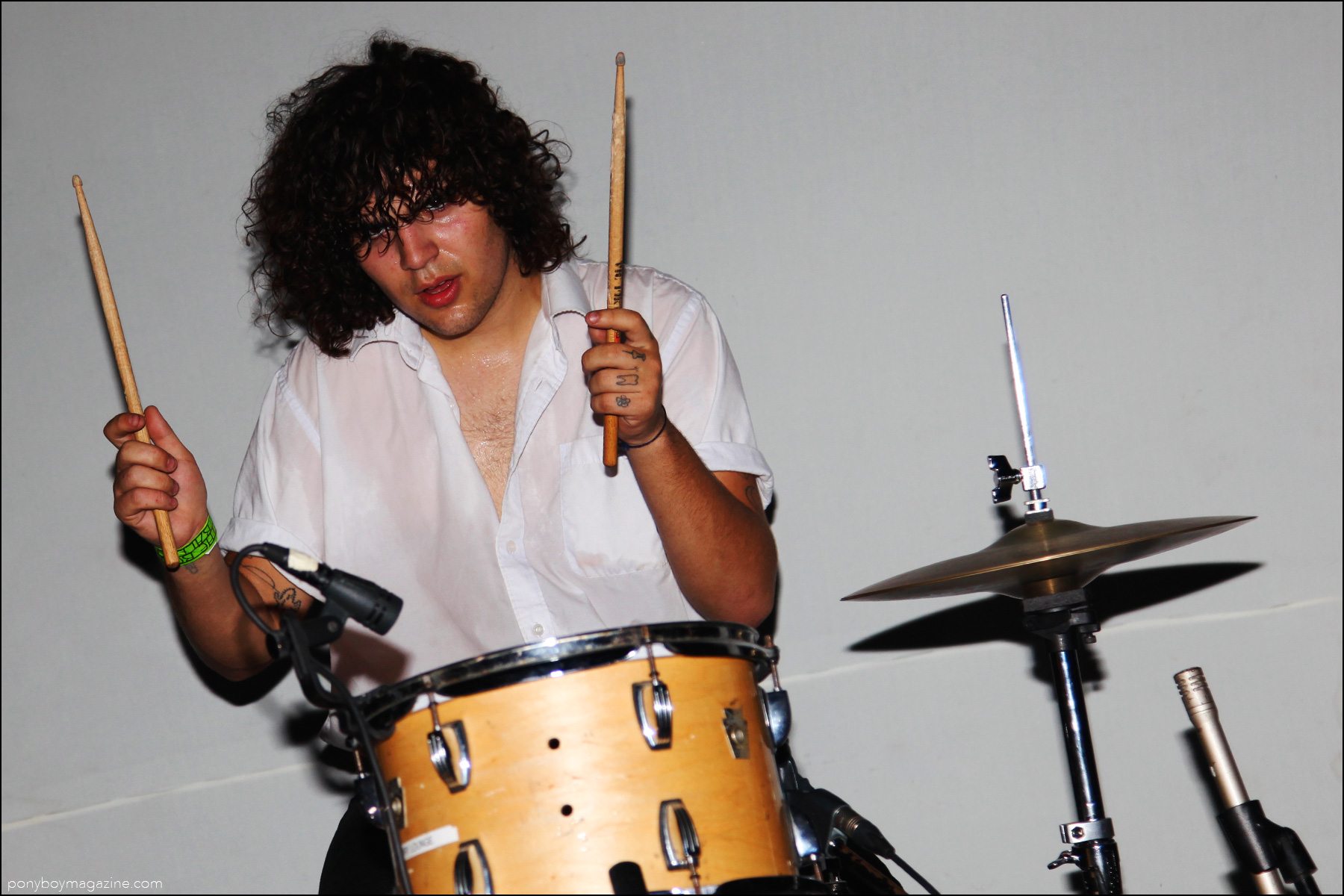 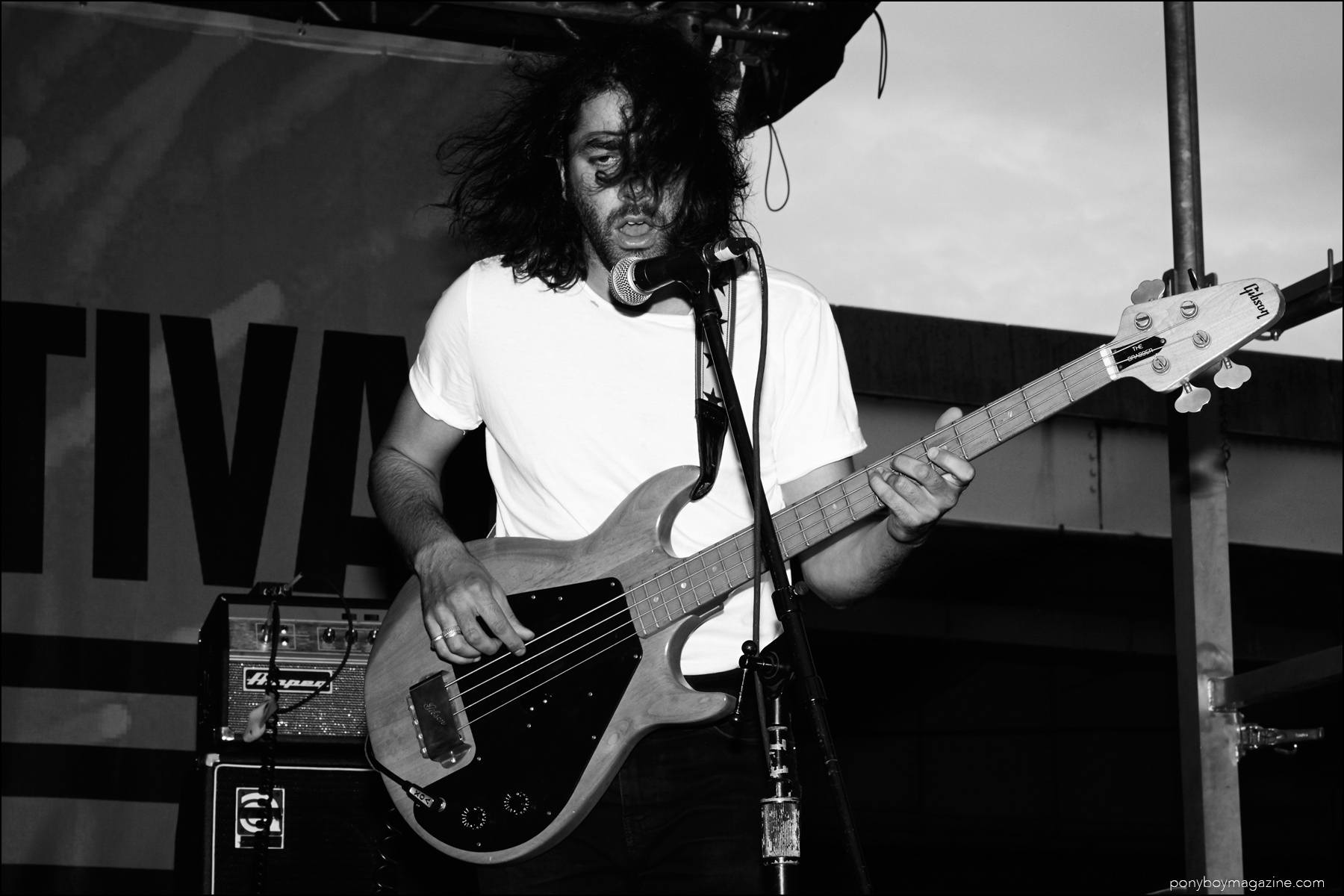 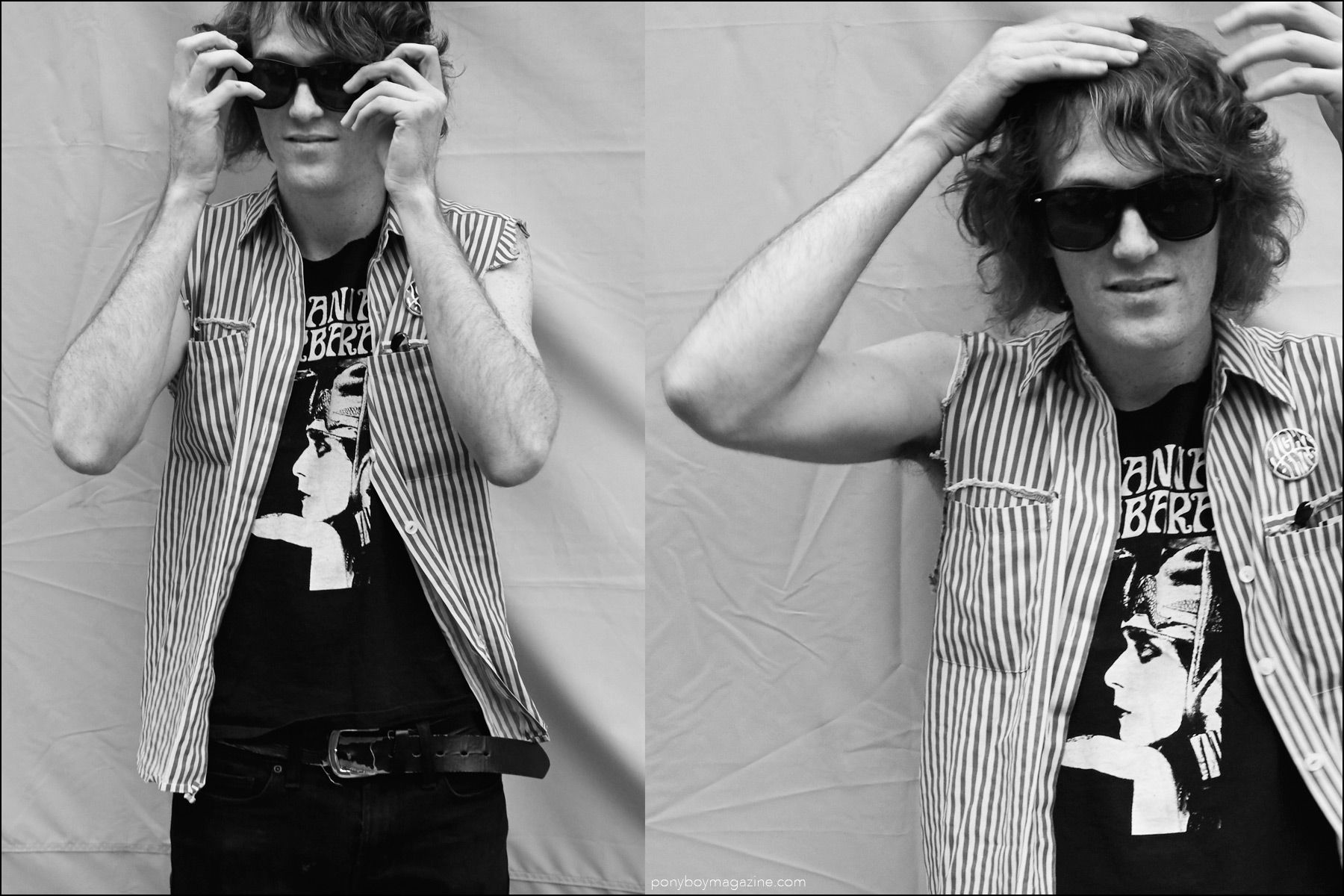 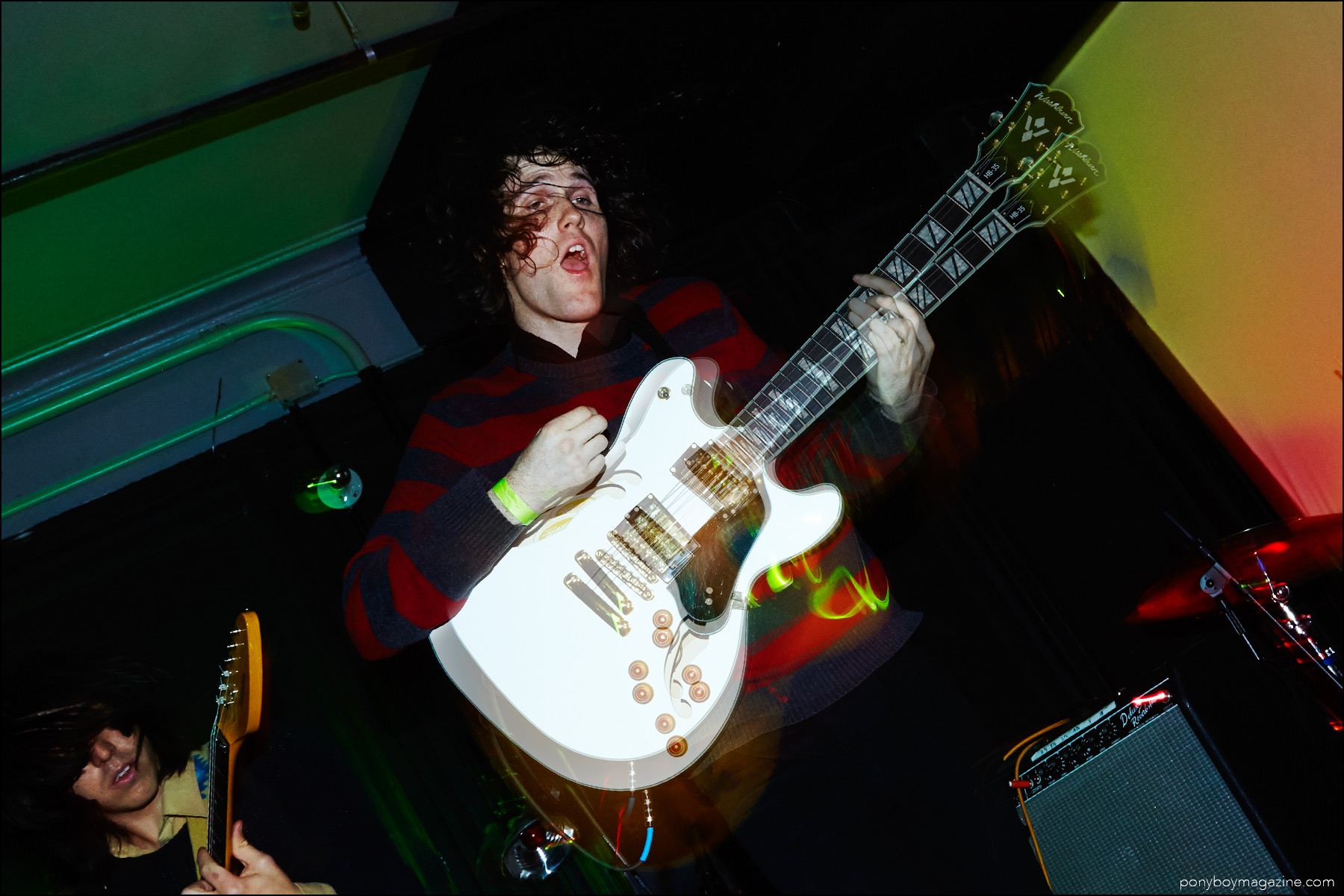 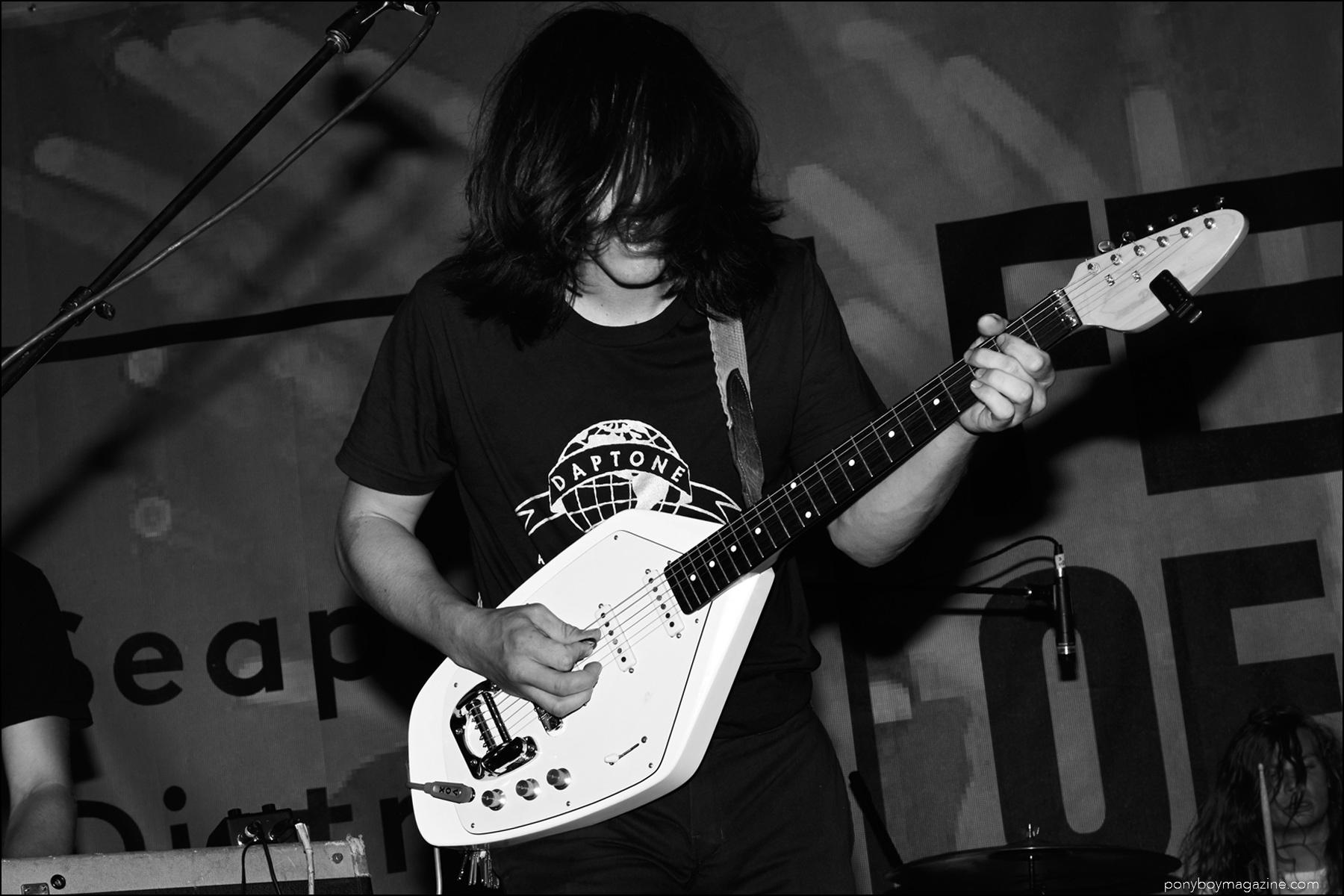 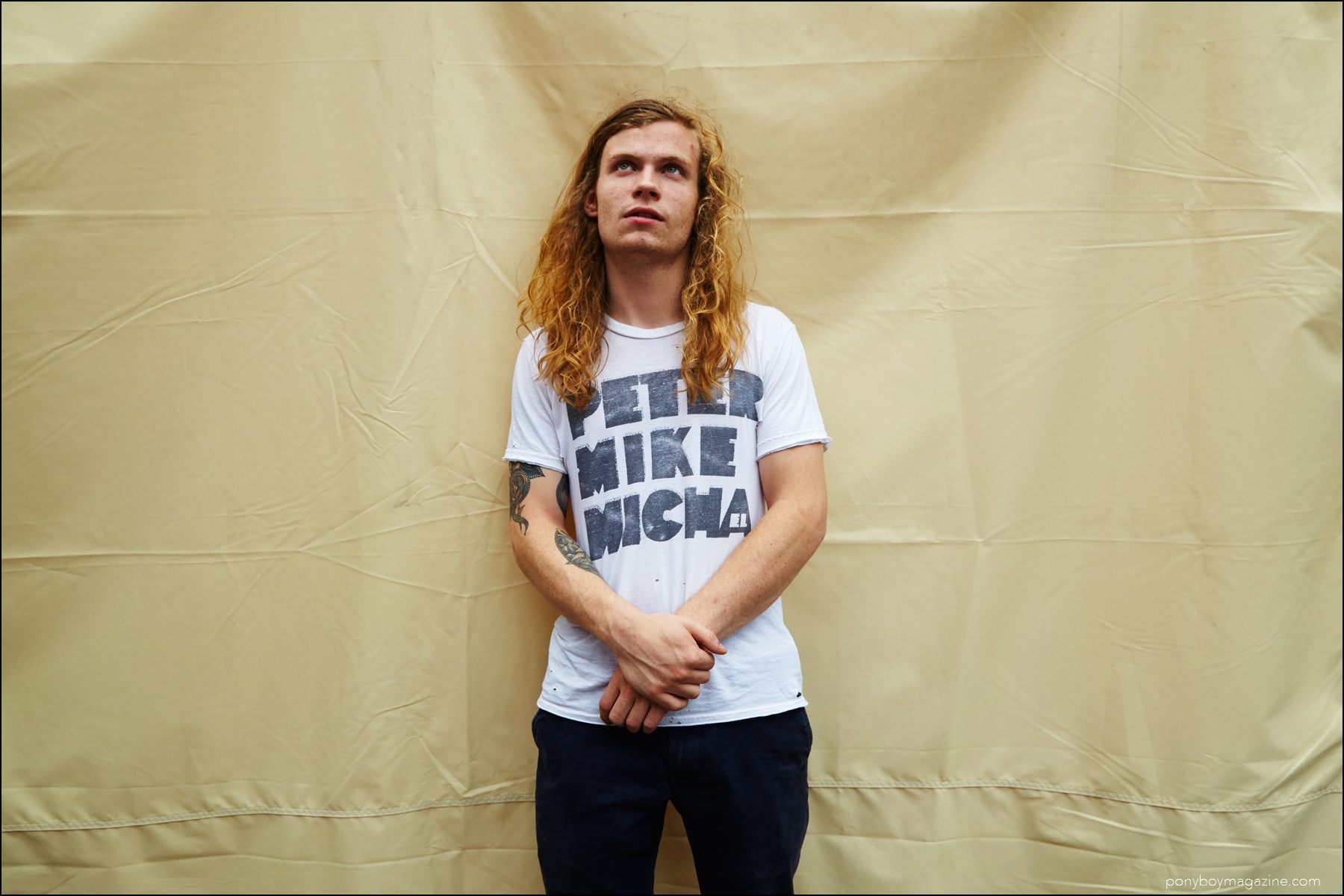 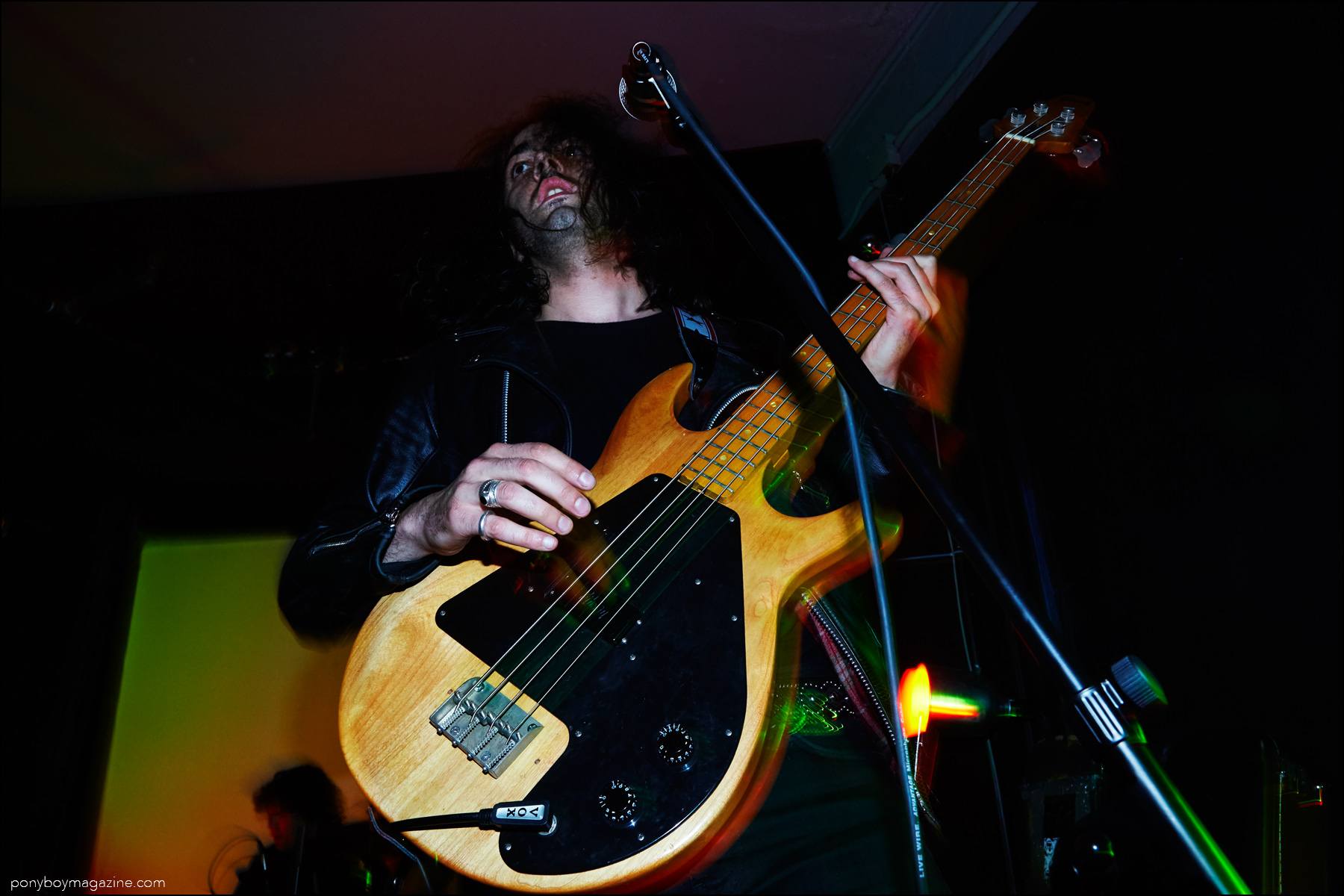 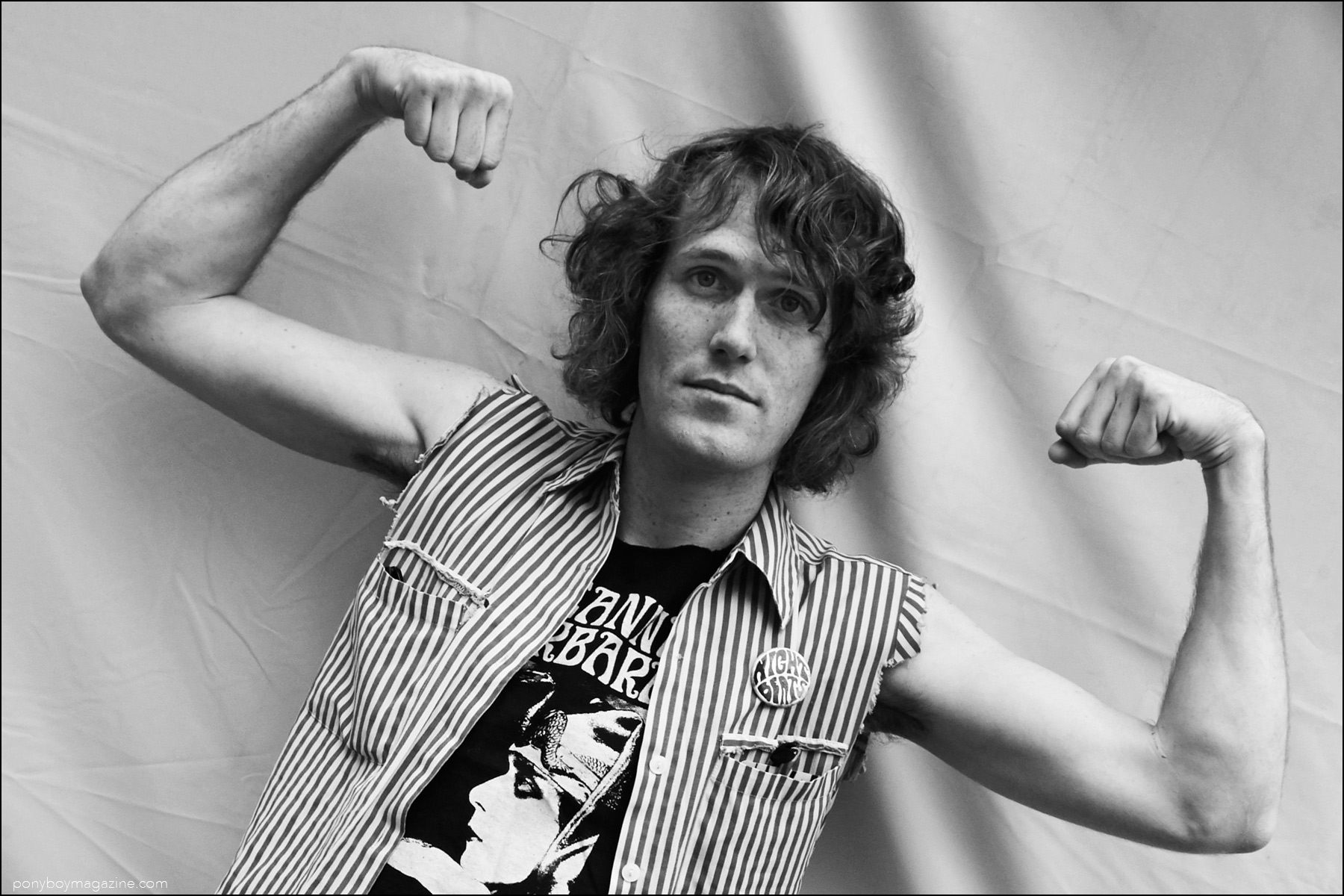 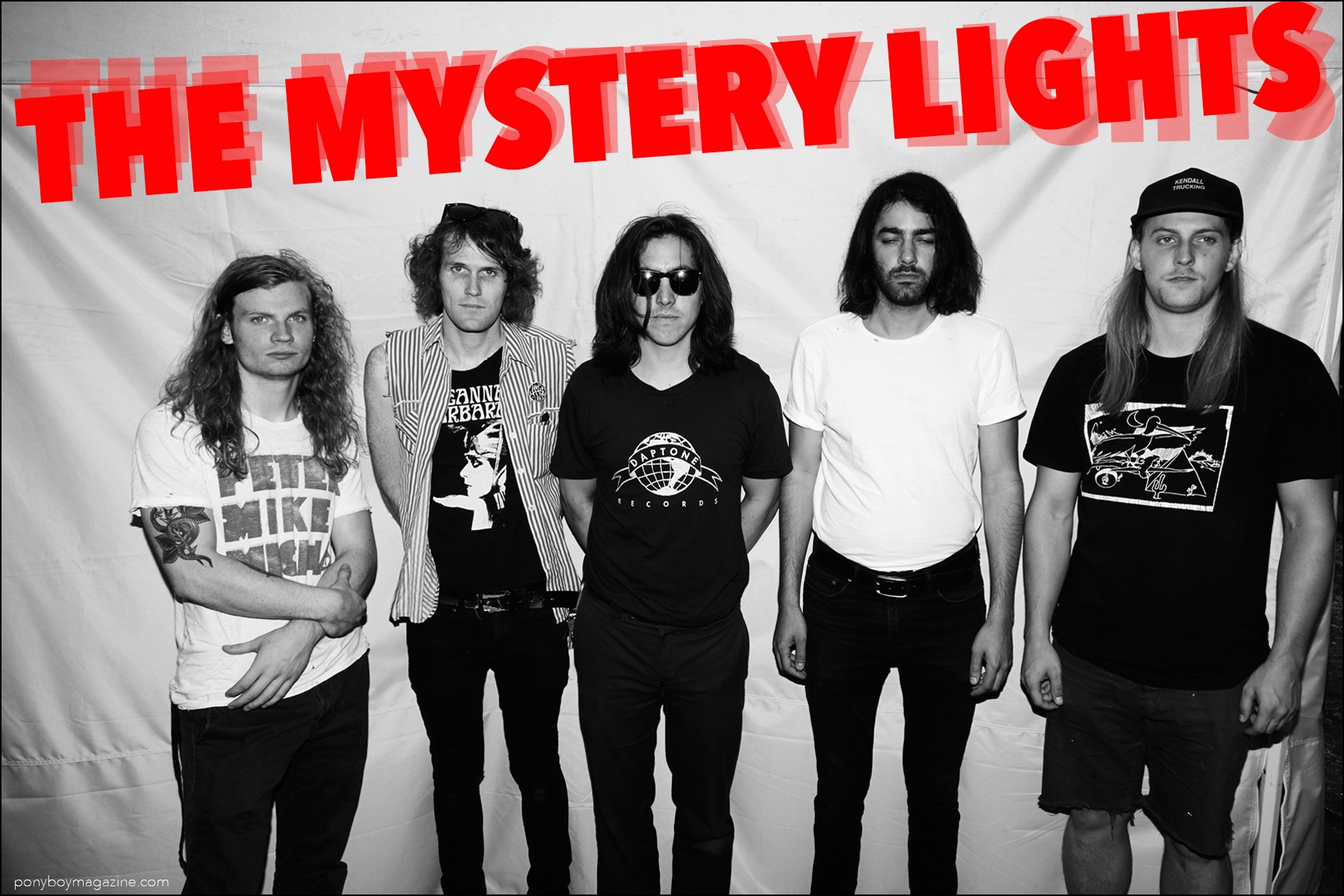 Our first Mystery Lights show was at a Jonathan Toubin “Soul Clap” party in Brooklyn a few months back and immediately we were hooked. There was so much raw and youthful energy on the stage. We were immersed and just couldn’t take our eyes off of their performance. In our opinion, it didn’t hurt that the band finished their set with a cover of the The B-52’s, “Why Don’t You Dance With Me?”. Truly incredible.

There’s been buzz around this band for a while, as they are the first release from Daptone’s subsidiary, Wick Records. They are young, talented musicians who formed this band in California during high school. Though it’s gone through many incarnations and line-up changes, the fact remains that it is still a band named The Mystery Lights, and they are sure to take over the world of rock ‘n’ roll. Catch them in their travels and buy their debut record! Photography Alexander Thompson. http://mysterylightsband.com

PONYBOY:  Tell us how and when you formed The Mystery Lights?

THE MYSTERY LIGHTS:  We were in high school when we started playing music together. Through skateboarding and mutual friends, Mike and I met and bonded over 70s punk music. We both had punk bands at the time and we (along with Joe Dellamora on bass) started The Mystery Lights in an auto repair garage in Salinas that our friend would let us practice in. We rarely played shows at first, and just played music after school all the time. Eventually, we got a live set together, started playing more frequently and we haven’t stopped since. The band has gone through a lot of lineup changes throughout the years and has even gone on multiple hiatus periods.  But Mike and I have always just kept the name and the same approach. Things have gotten more professional in recent years, but it’s still fun and it’s still about playing as much as possible and making raw rock ‘n’ roll music.

PONYBOY:   You relocated from California. Why the move to New York City?

THE MYSTERY LIGHTS:   We had some people out in New York encouraging us to move out there. So one day, LA Solano and I just decided to make the move. A more diverse, fast-paced city seemed appealing to us, with not much really happening for us in California at the time.

I made the move first. After getting a bit comfortable, LA decided to come visit and ended up staying permanently. We didn’t move to New York to make it as a band. We just kept playing small shows at the apartment we were staying at and the band reformed organically. It was just an excuse to keep playing music with whoever was around. It was weird because we decided to keep calling it The Mystery Lights, although we didn’t really feel like we had a solid line-up. We took it for granted that people were taking us more seriously than we were taking ourselves.

As we kept getting more show offers around the city, things got a little more serious and we realized the members of the band were not fitting the style we initially sought out to create. So we eventually added Alex Amini, Nick Pillot and Kevin Harris. That’s when we finally started locking back into the music we wanted to make.

It was a new, weird and fun period of going crazy in New York City at first, that we sort of got lost in. But, thankfully, we were able to get a solid group of friends together that make up the band today.

PONYBOY:   Has living in New York been inspirational for you, as far as writing and recording?

THE MYSTERY LIGHTS:   The East Coast crowd has seen a lot, so they are a bit more tough to convince. But once you get through to them, they uncross their arms and have a real good time. The West Coast is a lot more laid back, but both coasts are great. It’s hard to choose one over the other.

PONYBOY:  Your debut album “The Mystery Lights” was recently released. Tell us about this record.

THE MYSTERY LIGHTS:  The record was recorded at Daptone Studios in Bushwick. I believe it was either June or July of last year. We can never quite remember the exact month off the top of our heads. We recorded the album live in one week to a 2 inch all analog tape machine, and it was co-produced/engineered by Wayne Gordon (co-founder of Wick Records). We were finally able to capture the energy of the live show using this method, which was the idea for this record.

PONYBOY:    What’s the experience been like, working with this new label?

THE MYSTERY LIGHTS:  It’s been a very organic process. Christiana from Daptone initially saw us play and introduced us to Wayne and Neal. The Daptone family is very laid back and thoughtful. They really put their all into their releases and it was a great fit for us to be working with them. They are just cool, down-to-earth people that love music. No matter the style of music, Daptone’s approach allows for a very genuine, timeless end result that you can hear and feel. Wick records is an extension of what they have already created, and we are extremely honored to be the first release.

PONYBOY:  You worked with Wayne Gordon, the Grammy Award winning engineer on your record. What was that like?

THE MYSTERY LIGHTS:   Wayne’s the man. He would never tell you that he won a grammy. He’s modest, smart, sexy and single! Watch out ladies! Aside from that, he is a pleasure to work with and a great friend. We love you, Wayne.

PONYBOY:  You’ve been described as a psych/punk retro band. But how would you describe your sound to someone who isn’t familiar with The Mystery Lights? What bands/music are your main influences?

THE MYSTERY LIGHTS:   Our sound is definitely the product of all we were inspired by growing up, which was a lot of fuzz-driven 60s garage rock comps like “Uptight Tonight”, “Nuggets”, “Back From The Grave”, and the list goes on. We are also heavily inspired by artists like Billy Childish, The Kinks, Richard Hell, Television, Velvet Underground, Blind Willie Mctell, Sun Ra, Country Joe and the Fish, Them, Country Teasers, The Fall, Brian Eno, Kraftwerk, and Neu!.

We listen to everything though really, genres that extend far and beyond blues, jazz, hip hop, soul, punk, psych, rock ‘n’ roll, country, etc. Our influences know no bounds. We like music that feels honest and music that is weird and improvisational. This record definitely reflects a lot of that nuggets style influence but we do not really identify as a psych or retro band. We are not trying to make drugged out psych music and we don’t wear Haight Ashbury or mod costumes. Some people can pull off that vibe, but it’s not for us. We are loose and sloppy at times, but we do value musicianship. Unfortunately, that stuff can get lost in the “pysch” label as it is being thrown around today. The pysch music we prefer is blues-based rock ‘n’ roll music.

PONYBOY:   Your live performances are definitely electric, blowing people away with that youthful energy. Do you feel your fan base growing with constant touring?

THE MYSTERY LIGHTS:   Yeah, definitely. The more you get out there, the more people begin to come out and spread the word. The shows are getting to be a lot of fun now that people are more familiar with the songs. We played for many, many years in front of crowds with the reaction like, “ What? You don’t have a record out?”. It’s nice to finally have the music out there and floating around.

PONYBOY:  Tell us how life is on the road for you, as a band.

THE MYSTERY LIGHTS:  It’s been good. We’ve actually lucked out this tour with nice places to stay. A lot of people have been really hooking us up this run which is nice. We haven’t had to sleep in the van or on a sidewalk or lawn yet. Thank God! But, yeah, we’ve been pretty non-stop. The label has us doing tons of in-store performances to promote the record. So some days we have to wake up at 5am to drive 7 hours to be at an in-store, and then rush to the venue to get ready for the show. It’s been a wild ride, but we’re surviving. Lot’s of boozing, not much sleeping, extremely long drives (two in particular were 26 to 30 hours!), but we’ve somehow seemed to not get hurt or arrested just yet, or die from exhaustion. Plus, the van is a four wheel refrigerator which is great in the summer! The AC is an absolute essential when touring the deep south in the summer time.

PONYBOY:  With all the touring and traveling, have you even had a moment to start work on your follow-up record?

THE MYSTERY LIGHTS:  Yeah. We’ve got a good amount of new songs and ideas that are definitely going to be on the second record. The plan is to start working on it as soon as we get back from tour in September and then record it sometime in October.

PONYBOY:  What’s next for the band? Is there any rest and relaxation in the plans for a band that’s always on the go?

THE MYSTERY LIGHTS:  As soon as we get back, we’ll likely lay low for a week of much needed rest and relaxation, then head to Finland and Norway for a few dates, and then it’s Meltasia in the Catskills at the beginning of September. After that, we will be working on songs for the next record and planning out the next tour. 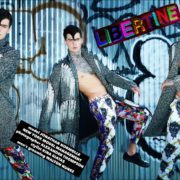 LIBERTINE
IN LIBERTINE WE TRUST